In response to the tragic murders at Charleston’s “Mother Emanuel” A.M.E. Church by a Confederate flag-waving white supremacist, the Southern Poverty Law Center is launching a campaign to identify and erase government-sanctioned symbols of the Confederacy across the country.

While many flags and other symbols are being taken down across the country, incredibly, many Southern states still honor Confederate “heroes” with paid holidays, and Confederate flags still fly in many public places and are emblazoned on city and state seals. 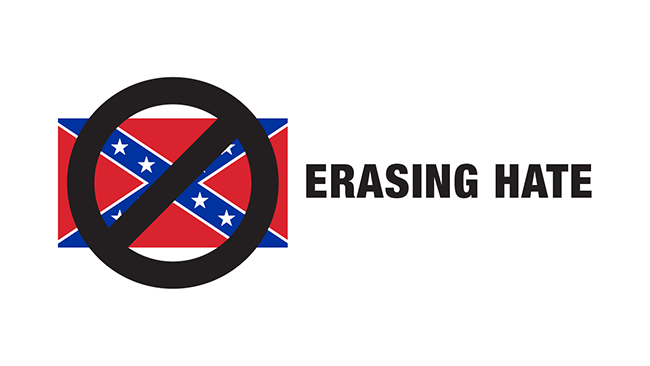 In fact, there are still statues, buildings and even a state park honoring Nathan Bedford Forrest, the Confederate general who led a massacre of black Union soldiers and later led the Ku Klux Klan.

“The Confederate flag doesn’t just represent Southern ‘heritage,’ it’s a deeply divisive symbol used by racist groups, one what was raised above state capitols in the Deep South during the civil rights movement to show that they stood for white supremacy,” said SPLC Founder Morris Dees. “There’s no place for this or other symbols of the Confederacy in our public spaces.”

The SPLC is creating an interactive, online map of sites throughout the United States that honor the Confederacy or its leaders – people such as Jefferson Davis, Robert E. Lee and Nathan Bedford Forrest.

To help us, please use our online form to send the Confederate names and symbols on public property in your town, and send us a photograph if possible.

Q: Why is Erasing Hate attempting to erase history?

A: The Erasing Hate campaign is not an effort to erase history. In fact, it relies on the historical record to help educate communities about Confederate symbols and how they have been used to represent the slave-holding South and white supremacist efforts to resist the civil rights movement. It encourages people to remind local governments that displaying these symbols in public spaces tacitly endorses the beliefs of the Confederacy and undermines confidence in a government’s ability to serve all of its citizens.

But these Confederate leaders and symbols should not be forgotten. They belong in our museums and history books. Erasing Hate encourages local governments to place these symbols in settings such as museums where people can learn the full history of the Confederacy.

Q: Removing Confederate symbols won’t end racism in our country; shouldn’t the SPLC focus on other ways to move our country forward?

A: These are divisive symbols that can leave some of a community’s residents questioning if their local government treats all citizens equally. Beginning a conversation about these symbols can lead to more than the removal of a symbol. It can spark discussion of other issues involving inequality and discrimination.

No single campaign can eliminate racism. The Erasing Hate campaign is just one small part of our effort to fight hate and seek justice for the most vulnerable members of our society. Learn more here.

Q: The Confederate battle flag is a symbol of Southern heritage, not hate. It shouldn’t be a focus of the Erasing Hate campaign.

A: It is true that, to many Southerners, the Confederate flag is an emblem of regional heritage and pride without the taint of its white supremacist origin. But to detractors, it has a starkly different meaning – representing racism, slavery and the country’s long history of oppression of African Americans. The bottom line is, the flag represents a nation that was based on the idea of white supremacy and that went to war to maintain slavery. Confederate Vice President Alexander Stephens made this clear when he declared that the Confederacy was “founded upon … the great truth that the negro is not equal to the white man; that slavery, subordination to the superior race, is his natural and normal condition.”

In addition, the flag was widely used by white supremacists during the civil rights movement. The Ku Klux Klan, in particular, adopted the flag as it waged a campaign of violence and terrorism against civil rights activists.

Most recently, it was displayed by the white supremacist who allegedly massacred nine African Americans at a historically black church in Charleston, South Carolina, on June 17, 2015. It is appropriate to question why local governments continue to display a flag with this history.

Q: Slavery existed under the American flag, too.  Does that mean we should take it down?

Q: I agree that the Confederate flag should be removed from public spaces, but why are you including Robert E. Lee in this campaign?

A: Erasing Hate does not believe Confederate leaders like Robert E. Lee should be forgotten. We should learn about Lee in our history books and museums. We should not, however, honor him for his efforts in leading a rebellion against the United States that, if it had succeeded, would have preserved slavery and birthed a nation devoted to white supremacy.

The fact is, many schools and other sites were named for Lee during the civil rights movement, in much the same way as the Confederate battle flag was hoisted above state capitols in the Deep South as a show of white resistance to ending the Jim Crow system of segregation. Communities should re-examine their tributes to Confederate leaders and determine if they represent their values and beliefs today.

Q: Isn’t removing Confederate symbols disrespectful to our ancestors who served the Confederacy during the Civil War? Not everybody who fought for the Confederacy owned slaves or were racist.

A: This issue isn’t about the personal motivations of individual soldiers. Historical documents show that as a nation the Confederacy endorsed slavery and white supremacy. We can honor our ancestors without endorsing the Confederacy and its beliefs.

Q: Outlawing these symbols will not change peoples’ beliefs, and could cause backlash.

A: The Erasing Hate campaign is focused only on removing government-sanctioned symbols of the Confederacy. Under the U.S. Constitution, individuals have every right to fly a Confederate flag or display other Confederate symbols – and we would never seek to deny those rights. These symbols also have a place in educational settings.

A governmental body, however, should not endorse a symbol that represents the oppression of a group of its citizens. There will certainly be vigorous debate when a community considers removing these symbols, but Erasing Hate is dedicated to helping promote a thoughtful and respectful discussion.