I was standing in the intake room at the juvenile detention center in Jackson, Mississippi, where two high school students had just been brought in from the small town of Terry, a few miles south of here.

One of the officers looked at me and pointed to the teens. “You gotta do something about this,” he said. “It’s Terry High School.”

“What happened?” I asked.

The boys, sitting next to each other, both shrugged sheepishly. They had been arrested on disorderly conduct charges following a minor altercation in the school cafeteria that afternoon.

The officer’s meaning was clear: Even law enforcement thought the school was going too far in having children arrested.

At the SPLC, we had been hearing reports that children at Terry High School were being arrested and sent to jail for minor misbehavior, and we had recently finished representing one of those students in disciplinary proceedings.

So, on a cool night in January, we met with a handful of parents at a Christian Methodist Episcopal Church in Terry to hear their stories.

Over pizza and sweet tea, one mother recounted how her son, a student with a disability, was handcuffed and threatened with arrest for walking in the hallway, at a teacher’s request, during school hours.

A father described his lingering frustration after receiving a call from the juvenile detention center – not from the school – hours after his son was arrested following an interaction with a bully. He reported that Terry High’s school resource officer thought the arrest was unwarranted but was obliged to follow the school administration’s orders anyway.

Fighting tears, the parents of a senior described the trauma of becoming involved with the juvenile court. Their son had a spotless disciplinary record but was arrested on campus and locked up for seven days.

Each story followed the same pattern: A student is arrested for minor misbehavior, the parents are kept in the dark, and the family finds itself navigating the criminal justice system.

After some digging, we discovered that arrests at Terry High School have increased by more than 400 percent in just the last three school years. This year, 31 children have been arrested, compared to just six in 2013-14 and 20 last year.

The majority of the arrests were for the vague offense of “disorderly conduct.” That means that, for the most part, students weren’t committing violent or dangerous crimes. Instead, they were being detained, interrogated, arrested, transported to the juvenile detention center, and saddled with a criminal record for typical adolescent misbehavior.

We’ve seen the same phenomenon in other Mississippi towns and across the Deep South, where school officials have come to rely on police and the criminal justice system to handle routine disciplinary matters. The consequences can be devastating for children who are pushed into this “school-to-prison pipeline,” because arrests increase the odds of school dropout and adult incarceration. And, as the U.S. Department of Justice has noted, students of color and those with disabilities are disproportionately affected by this kind of harsh discipline. At Terry High School, black children make up more than 80 percent of the student body. 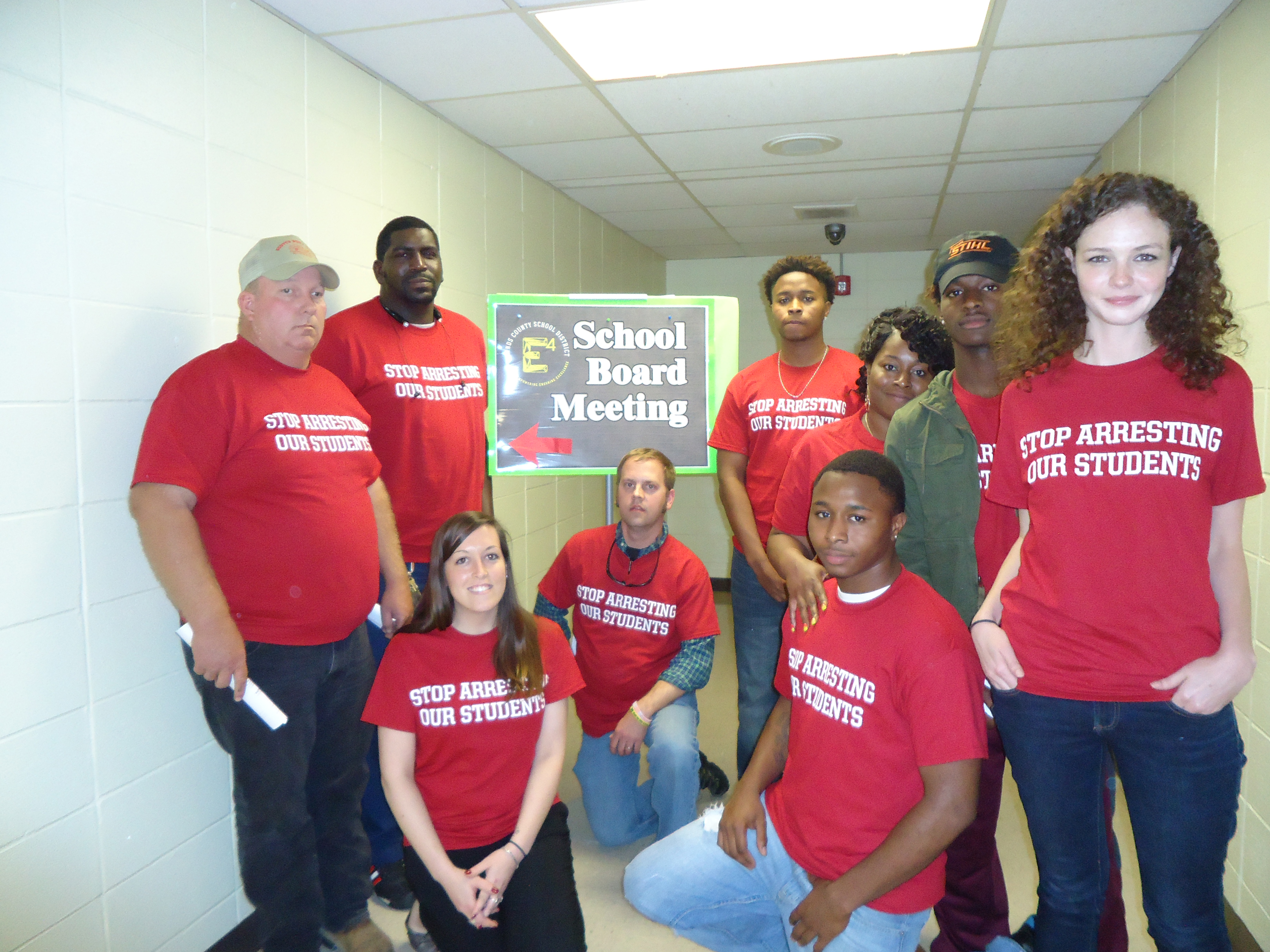 Lydia Wright, author of this piece, (pictured to the far right) poses with members of a coalition asking Terry High School to reform its discipline policies.

To help resolve the problem, we worked with parents to draft a letter demanding that the school district revise its discipline policies, stop arresting students for disorderly conduct, and start including parents in every step of the discipline process. The first to sign the letter were the executive director of the Henley-Young Juvenile Detention Center and two state representatives. Dozens of concerned parents and community members also joined the effort.

This growing community coalition – wearing T-shirts that said: “Stop arresting our students. Let kids be kids” – presented the letter at a school board meeting last week.

Still, there is hope: The district has scheduled a community meeting to further explore issues at Terry High School. The Terry High community is finding its voice and, perhaps, the district is starting to listen.

The two boys I met at Henley-Young have a long road ahead. But we have great hope that the district will join countless others across the country that are already reforming their disciplinary policies – including a number that were the subject of SPLC lawsuits or civil rights complaints. Collaboration between parents, the school and the district will ensure that future Terry High students graduate with a diploma, not a criminal record.

Lydia Wright is a law fellow in the SPLC’s Jackson, Miss., office.