A movement made up of sheriffs claiming to be the highest law enforcement authority in the country is growing nationwide as it exploits hot-button issues such as gun control to encourage sheriffs to defy federal laws they don’t like, according to the Summer 2016 issue of the SPLC’s Intelligence Report, released today.

The cover story, “Line in the Sand,” details the growth of this radical ideology since 2009. The movement, formed around an organization called the Constitutional Sheriffs and Peace Officers Association (CSPOA), is a phenomenon rarely, if ever, seen in the United States – a concerted, long-term effort to recruit law enforcement officers into the antigovernment “Patriot” movement. 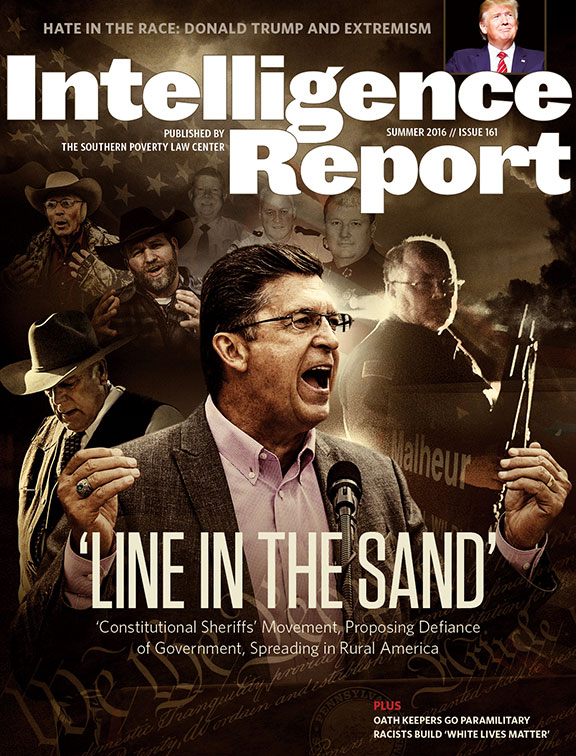 “The phenomenon of the ‘constitutional sheriffs’ movement is deeply troubling and problematic,” said Mark Potok, senior fellow at the SPLC and editor of the Intelligence Report. “These men and women are being told by extremist leaders that they have the right to decide what laws they want to enforce and can keep federal law enforcement agents out of their counties. That is utterly untrue, the very opposite of constitutional, and it in fact encourages sheriffs and their deputies to defy the law of the land.”

The Intelligence Report interviewed dozens of sheriffs who appeared on a list, compiled by the CSPOA, of almost 500 sheriffs who purportedly had “vowed to uphold and defend the Constitution against Obama’s unconstitutional gun measures.” Overall, it appears the movement is successfully exploiting concerns about gun, environmental and land-use regulations to bring law enforcement officers into the fold.

The report notes that the organizing of these sheriffs is occurring against the backdrop of the larger militia movement and the occupation at the Malheur National Wildlife Refuge in Oregon early this year by antigovernment extremists.

The threat of the antigovernment “Patriot” movement is also examined in a training DVD included in the law enforcement edition of this issue of the Intelligence Report. The video, a short film designed to be shown at roll call, focuses on the rising threat of antigovernment extremists, especially in the wake of the occupation in Oregon and a related 2014 armed standoff with law enforcement officials in Nevada.