Georgia detainees less likely to be released on bond.

Immigration and Customs Enforcement (ICE) detained over 243,000 immigrants in Fiscal Year 2015 (FY 2015).1 The detained immigrants are housed in a patchwork of public and private facilities around the country under contract with ICE.

There are three immigrant detention facilities in Georgia. The two largest facilities are Stewart Detention Center in Lumpkin and Irwin County Detention Center in Ocilla.2 Over 11,000 detainees were booked into these two detention centers during FY 2015. Nearly 8,500 people were booked out – or released – from the facilities for various reasons, including deportation or termination of proceedings when the detainee won relief.

This analysis is based on data released by ICE through a Freedom of Information Act request for FY 2015. It compares data from the Stewart and Irwin County detention facilities to national data. The data provided by ICE represents a partial fiscal year, from Oct. 1, 2014, to July 31, 2015 – the most recent national and local data available from ICE.

The analysis reached the following conclusions: 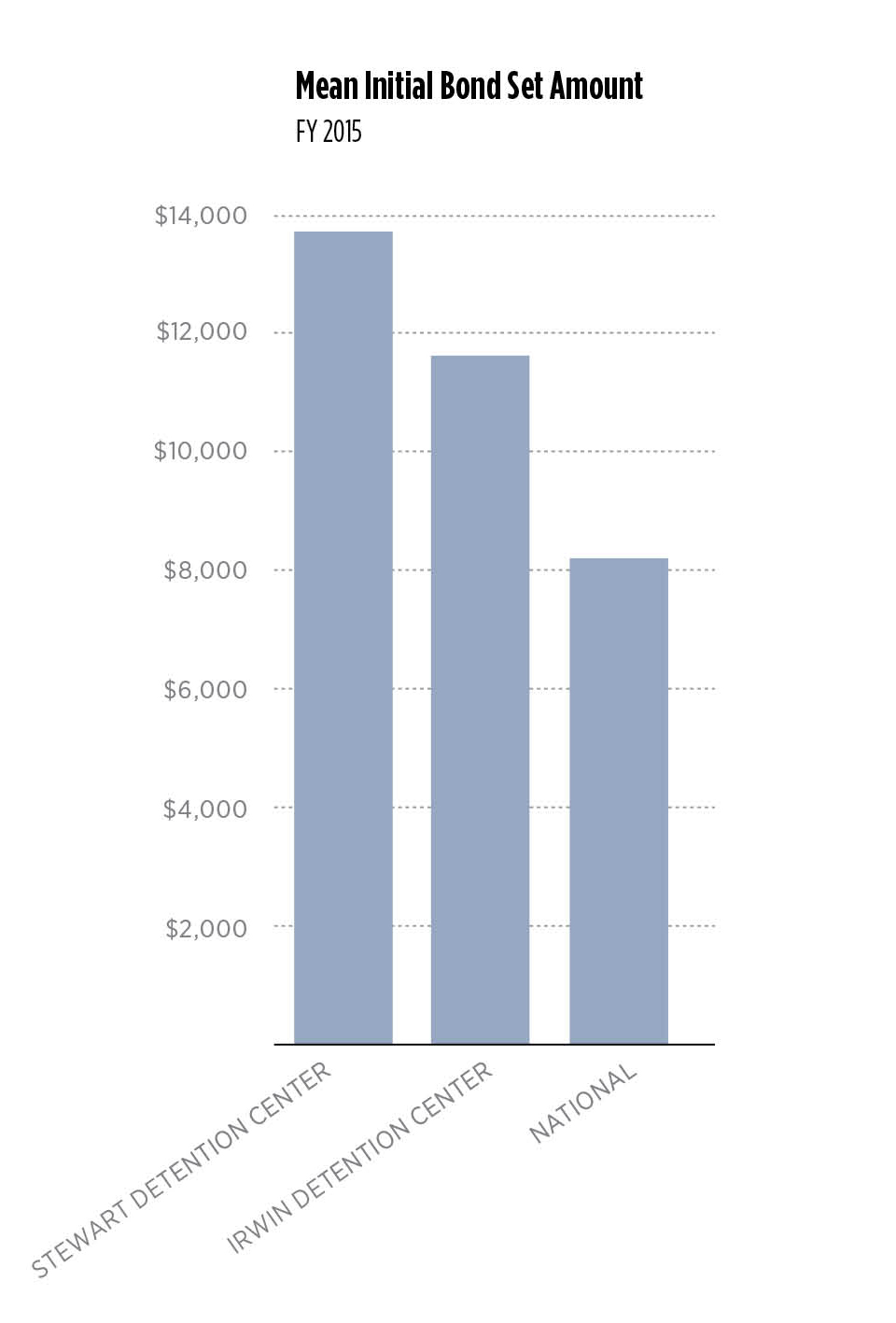 • Bond for immigrants detained in Georgia is much higher than the national average.3 Nationally, the initial bond for detainees was $8,200 in FY 2015. At Stewart Detention Center, however, the average bond was 67% higher: $13,714, an inaccessibly high amount for the vast majority of detainees. At Irwin County Detention Center, the average bond was 41% higher, at $11,637.

• Immigrants at Georgia detention centers are far less likely to receive parole. Federal regulations and Department of Homeland Security policy state that parole should be granted to individuals who have recently arrived in the country and have demonstrated to United States Citizenship and Immigration Services or an immigration judge that they have a credible fear of persecution or torture and are not a flight or security risk.

Source: All data analysis was performed by the Southern Poverty Law Center. Data was provided courtesy of Human Rights Watch, which obtained the dataset from U.S. Immigration and Customs Enforcement through a Freedom of Information Act request. For more information regarding these calculations, please contact Eunice Cho at the Southern Poverty Law Center, eunice.cho@splcenter.org. For more information regarding the complete dataset, please contact Grace Meng at Human Rights Watch, mengg@hrw.org.

3 Detainees may be released on bond, or payment of at least $1,500 of security, if an ICE officer determines that release would not pose a danger to the community and that the person would be likely to appear for future proceedings. Detainees may seek a review of ICE’s custody determination with an immigration judge.

4 No reason given for release. These figures are not factored into percentage calculations.