The Southern Poverty Law Center, along with its Montana co-counsel, filed suit in federal court today against the founder of a major neo-Nazi website who orchestrated a harassment campaign that has relentlessly terrorized a Jewish woman and her family with anti-Semitic threats and messages.

The lawsuit describes how Andrew Anglin used his web forum, the Daily Stormer – the leading extremist website in the country – to publish 30 articles urging his followers to launch a “troll storm” against Tanya Gersh, a real estate agent in Whitefish, Montana. Gersh, her husband and 12-year-old son have received more than 700 harassing messages since December.

The intimidation began after Anglin accused Gersh of attempting to extort money from the mother of Richard Spencer. The younger Spencer heads the National Policy Institute, a white nationalist organization.

Anglin and Spencer are both prominent leaders of the “alt-right” movement that rallied white nationalists behind President Donald Trump’s campaign.

“Andrew Anglin knew he had an online army primed to attack with the click of a mouse,” said SPLC President Richard Cohen. “We intend to hold him accountable for the suffering he has caused Ms. Gersh and to send a strong message to those who use their online platforms as weapons of intimidation.” 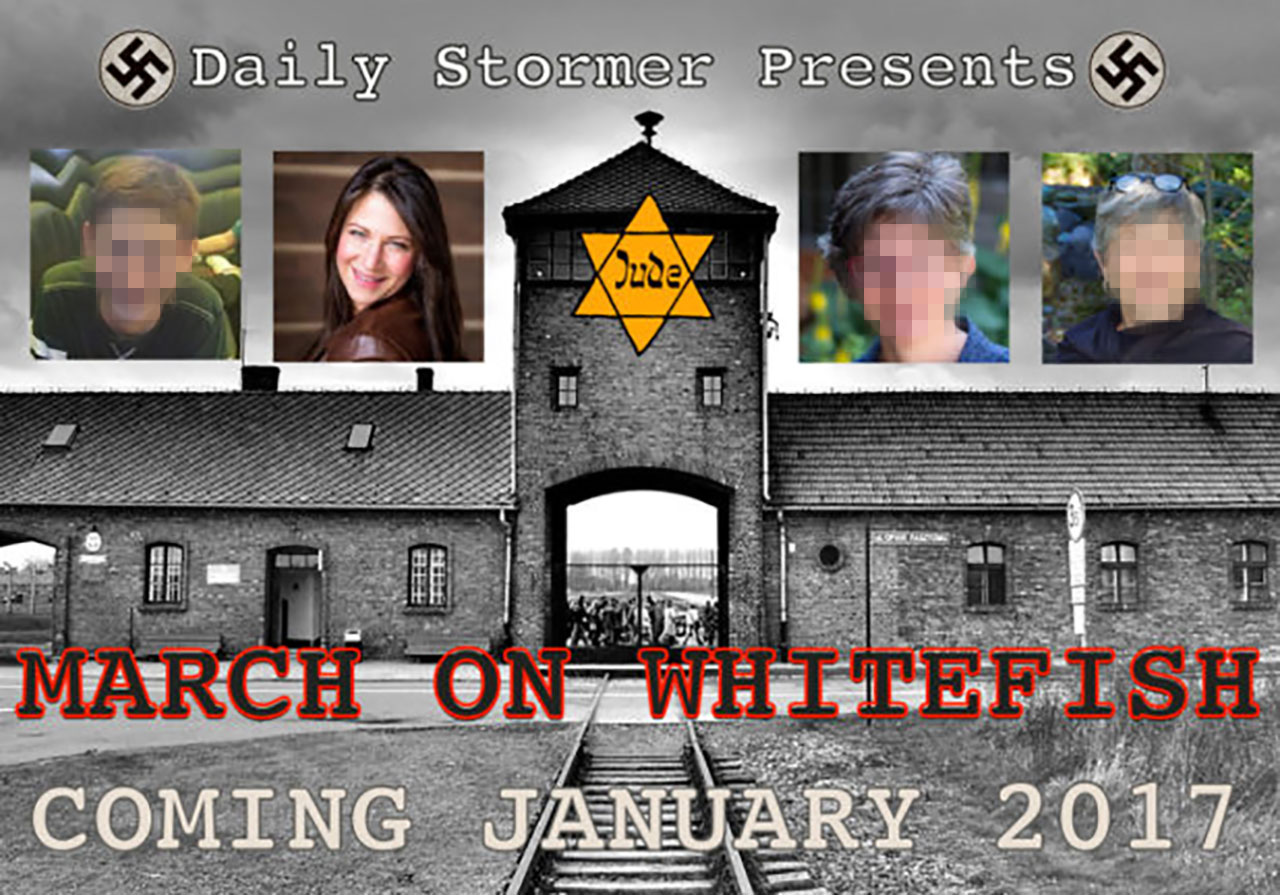 The lawsuit, filed in the U.S. District Court for the District of Montana, Missoula Division, seeks compensatory and punitive damages. It accuses Anglin of invading Gersh’s privacy and intentionally inflicting emotional distress. It also outlines how his campaign violated the Montana Anti-Intimidation Act.

“There’s no place in Montana for the hate Andrew Anglin unleashed from the darkest corners of the internet,” said co-counsel John Morrison, a partner with Morrison, Sherwood, Wilson, & Deola. “The attack on Tanya Gersh was an attack on all of us.”

Anglin, whose website attracts hundreds of thousands of readers each month, is a key figure in the alt-right movement, which was energized by Trump’s campaign. The day after the election, he wrote, “Our Glorious Leader has ascended to God Emperor. Make no mistake about it: we did this. If it were not for us, it wouldn’t have been possible.”

Anglin also encouraged his followers after the election to harass Muslims and “any foreigners you see.” He wrote, “We want these people to feel unwanted. We want them to feel that everything around them is against them. And we want them to be afraid.”

Within the first 10 days after the election, the SPLC documented nearly 900 bias-related incidents across the country, many of them done in Trump’s name.

The Daily Stormer, which has established 31 physical chapters in the United States and more in Canada, has been designated a hate group by the SPLC. It takes its name from the Nazi propaganda sheet known as Der Stürmer.

Some of its readers do more than issue threats. Dylann Roof, who massacred nine African Americans in Charleston in 2015, posted on the site. Thomas Mair, the neo-Nazi assassin who last year killed Jo Cox, a British member of Parliament, was a regular reader. And just last month, another Daily Stormer reader, James Jackson, was charged with murder and terrorism after carrying out a plan to go to New York City to kill a black man at random.

The lawsuit is similar to litigation the SPLC has used to win crushing court judgments against 10 major white supremacist organizations and 50 individuals who led them or participated in violent acts. The legal strategy, however, has been adapted for the digital age.

Gersh was targeted after she agreed to help Sherry Spencer sell a commercial building she owned in Whitefish, where both women live. There were rumors that the building would be a target for protests around the time that a video of Richard Spencer’s speech to a white nationalist conference in Washington, D.C., went viral. In the video, taken days after the 2016 election, he declares, “Hail Trump! Hail our people! Hail victory!” as white nationalists respond with Nazi salutes.

Gersh agreed to help sell the building after Sherry Spencer reached out to her. Anglin launched the troll storm after Spencer changed her mind and published an article attacking Gersh.

“Tell them you are sickened by their Jew agenda,” Anglin wrote under the headline “Jews Targeting Richard Spencer’s Mother for Harassment and Extortion – TAKE ACTION!” The post included Gersh’s contact information. It also included photographs of Gersh, her husband and son. One was altered to include a yellow Star of David with the label “Jude” – an allusion to the emblem the Nazi regime required Jews to wear during World War II.

Anglin launched his campaign of harassment and intimidation with these words: “Let’s Hit Em Up. Are y’all ready for an old fashioned Troll Storm? Because AYO – it’s that time, fam.”

Thanks for demonstrating why your race needs to be collectively ovened.

You have no idea what you are doing, six million are only the beginning.

We are going to keep track of you for the rest of your life.

You will be driven to the brink of suicide & We will be there to take pleasure in your pain & eventual end.

One message included an image of Gersh being sprayed with a green gas, along with the words: Hickory dickory dock, the k--- ran up the clock. The clock struck three and the Internet Nazis trolls gassed the rest of them.

An email to her husband read: Put your uppity s--- wife Tanya back in her cage, you rat-faced k---. … Day of the rope soon for your entire family.

Gersh’s son received a tweet with the image of an open oven and the message: psst kid, theres a free Xbox One inside this oven. Anglin referred to him as a “creepy little f-----.”

There were also phone calls that consisted only of the sound of gunshots.

The campaign escalated to the point that Anglin planned an armed march in Whitefish that he threatened would end at Gersh’s home. He promoted the march, which never materialized, with an image that superimposed Gersh, her son and two other Jewish residents on a picture of the front gate of the Auschwitz concentration camp.

The threats have taken an emotional and physical toll on Gersh. She experiences panic attacks and fears answering the phone. She often goes to bed in tears and wakes up crying. She has trouble leaving her home and feels anxiety in crowds. She has gained weight, has lost hair and is in physical pain. She has been prescribed medication and has sought other treatment, including trauma therapy.

“This attack has been one long nightmare that has changed me forever in so many ways,” Gersh said. “No one should endure what I’ve experienced. And with the love and support of my family and others, we will take a stand against hate.”