The city of Corinth, Mississippi and Municipal Court Judge John C. Ross are operating a modern-day debtors’ prison, unlawfully jailing poor people for their inability to pay bail and fines, according to a federal class-action lawsuit filed by the SPLC and another civil rights group.

“Even though debtors’ prisons have been outlawed in this country for more than 200 years, Corinth is running a jail from the Dark Ages in one of the nation’s poorest regions – it’s shameful,” said Sam Brooke, deputy legal director for the SPLC.

The lawsuit, filed in the U.S. District Court for the Northern District of Mississippi Aberdeen Division, describes how Judge Ross and the city of Corinth routinely violate the constitutional rights of people facing misdemeanor or municipal charges by holding them in jail until they pay bail money or their fine, without taking into account their ability to pay, as required by law. 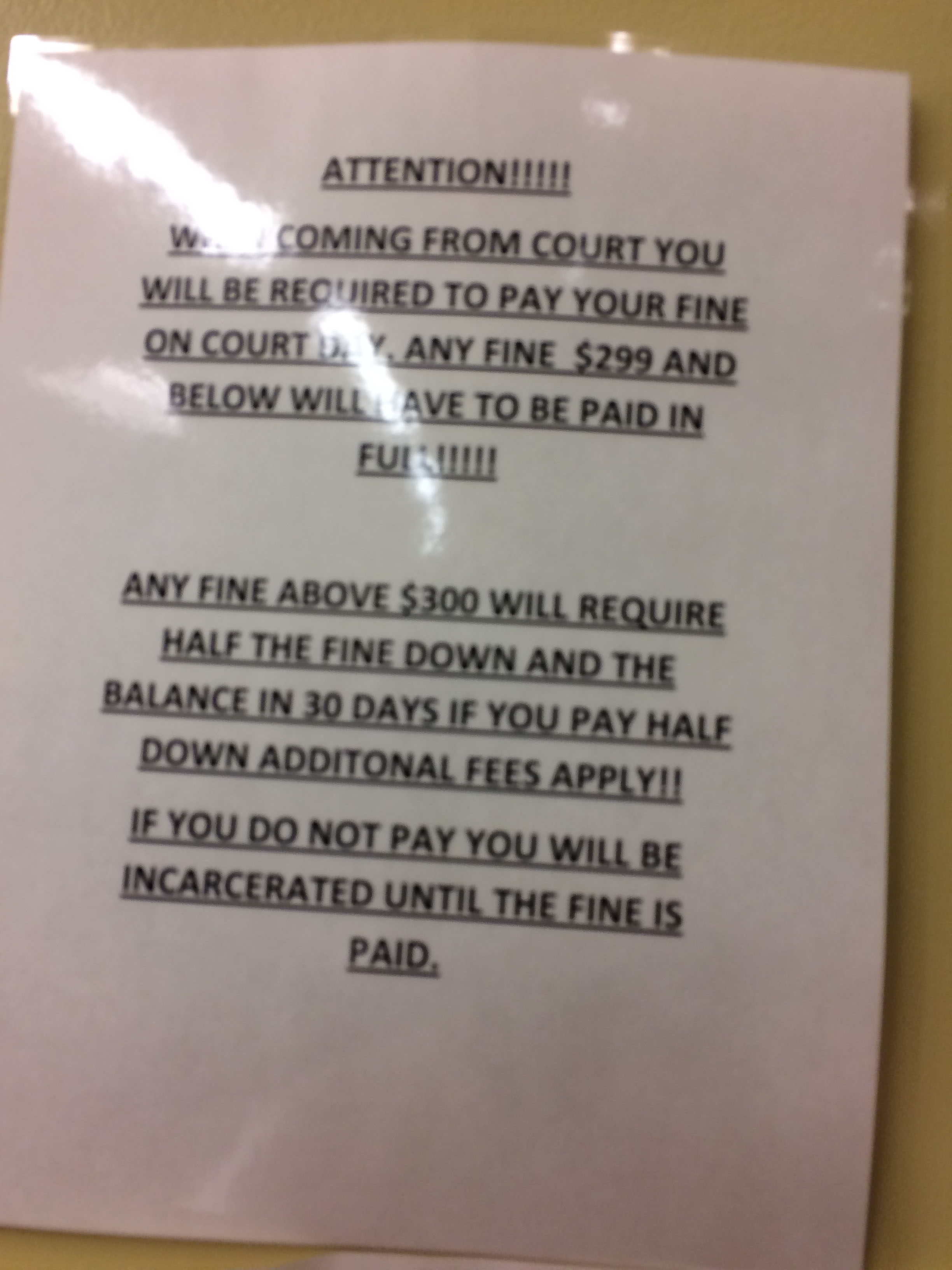 Brian Keith Howell, a 28-year-old man whose leg was amputated following a car accident, was arrested Nov. 27 on a warrant for three minor traffic violations. On Dec. 4, Judge Ross assessed a $1,000 fine after Howell pleaded guilty to the traffic tickets and told Howell that he had to pay the amount in full or sit out the equivalent amount of the fine in jail – 50 days.

“Mr. Howell tried to tell the judge that he was working on getting disability and could not pay the fine right away, but Judge Ross wouldn’t listen,” Brooke said.  “Judge Ross just told Mr. Howell his fine amount and sent him back to jail.”

Because Judge Ross only holds court on Mondays, people who have been arrested can languish in jail for a week or longer before their initial court appearance to determine probable cause and assess conditions of release.

Sammy Dwight Brown, a 35-year-old man living on a small disability check, was arrested on Dec. 1 for public intoxication. Currently, his bail is set at $600 and he will have to wait until Dec. 11 for a hearing, even though the Mississippi Rules of Criminal Procedure requires an initial appearance within 48 hours of arrest for any person who is not released on their own recognizance.

Once defendants make it to court, Judge Ross asks if they admit to or deny the charges. Persons who admit to the charges are assessed a fine and required to pay at least a sizeable down payment. If the individual cannot pay, they are required to sit out their fine at a rate of $25 per day. Judge Ross makes no inquiry into their ability to pay, and does not inform them of their right to counsel prior to jailing them for non-payment, according to an SPLC investigation.

The SPLC and the MacArthur Justice Center at the University of Mississippi School of Law have been investigating the court’s practices over the last year. Over the course of the investigation, the groups encountered many indigent defendants who were either threatened with jail time or spent a considerable amount of time in jail for their inability to pay court-imposed fines and costs. 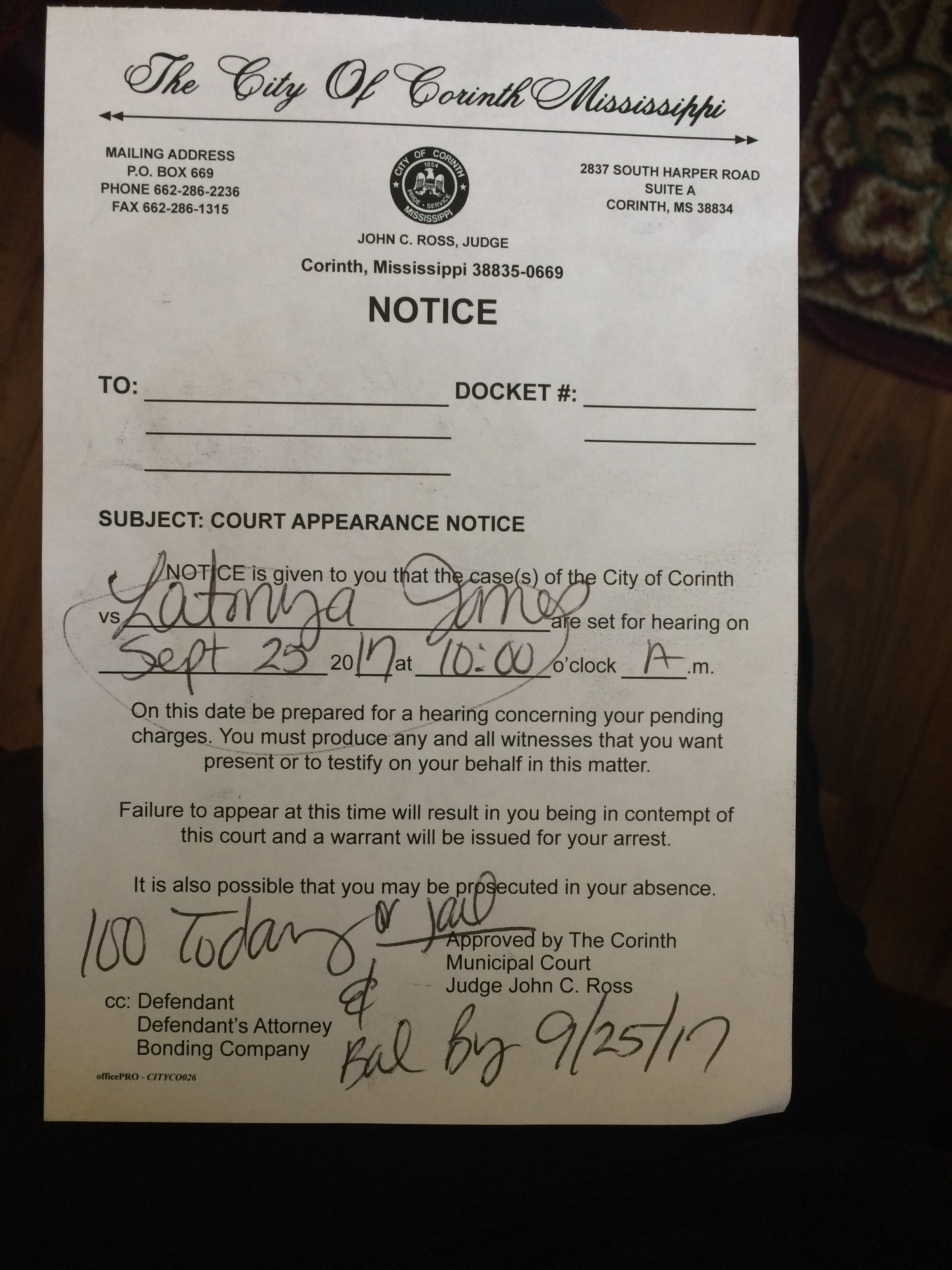 Latonya James, an unemployed mother, appeared before Judge Ross on Aug. 14 for a school attendance violation charge. When she informed Judge Ross that she could not make the payment, he gave her a notice to hand to the clerk’s office that read, “$100 today or jail.”

Latonya James, an unemployed mother, appeared before Judge Ross on Aug. 14 for a school attendance violation charge involving her daughter who is struggling with bipolar disorder. In July, Judge Ross ordered James to pay $100 toward her fine of $163.25 by Aug. 14. When she informed Judge Ross that she could not make the payment, he gave her a notice to hand to the clerk’s office that read, “$100 today or jail.” She was not allowed to leave the clerk’s office, where she was threatened with jail, until her brother drove two hours to pay the $100.

The illegal practices of Judge Ross and the Corinth Municipal Court are especially problematic because the Mississippi Supreme Court recently passed new rules designed specifically to prohibit these practices. The Rules of Criminal Procedure set up detailed procedures for courts to follow when addressing inability to pay. The Corinth Municipal Court is ignoring them.

Lawyers for the SPLC and the MacArthur Justice Center submitted a separate complaint regarding Judge Ross’ conduct to the Commission on Judicial Performance, as part of their legal obligation under the Mississippi Rules of Professional Conduct.