Trisha had no idea what was in store for her on that fateful ride to the Piggly Wiggly supermarket in the mid-1980s.

The teen, who was living in a “Christian home” for wayward girls, was told to accompany another girl and the wife of the home’s director on what she thought was a grocery run.

When they arrived at the store’s parking lot, the other girl – who was nine months pregnant – began to give birth in the back of the van. Out of nowhere, a man appeared, slid open the van door and handed the director’s wife, nicknamed “Mama,” a stack of $1 bills. Then he whisked away the freshly born baby.

Mama handed the money to Trisha.

“Before the afterbirth was delivered, I had been given a stack of cash,” Trisha said. “I was told to count the money to make sure there was $250 there. I had to count the money three times, because I was so nervous and scared of getting it wrong. The next day, this girl was removed from the home and I never saw her again.”

Trisha was one of dozens of girls who lived in the Bethesda Home for Girls near Hattiesburg, Mississippi, in the 1980s. Many had been sent there by their parents because they were pregnant and unmarried or had behavioral issues.

Bethesda’s veneer of benevolence masked a grim reality: Girls lived virtually as prisoners. They were locked up, cut off from the outside world, paddled until they were bruised or bleeding, forced into highly subservient roles and emotionally abused in many ways. They endured the kind of mind control tactics one expert said were typical of religious cults and Nazi concentration camps.

Once, a group of girls tried to run away, but their daring escape attempt ended tragically when one of them was run over and killed by a truck.

An SPLC lawsuit helped expose the abuses at the home and ultimately shut it down. Now, at the age of 47, Trisha, whose last name has been withheld to protect her identity, has chosen to share her experience.

She was just 13 when her parents sent her to Bethesda from their home in Kansas.

Trisha wasn’t pregnant. The only “unforgivable” sin she had committed, at least in the eyes of her adoptive parents, was questioning the Bible.

The Bethesda Home for Girls presented itself as just the thing to help a troubled girl. Redemption Ranch Inc., the parent organization, took girls from its various homes on singing tours of churches across the country to help raise money.

During these programs, Bob Wills, a fundamentalist Baptist minister and Bethesda’s director, would bring the girls before congregations, where they would give what Trisha described as forced testimony praising the home they secretly loathed.

When the singing stopped

Before the girls entered Bethesda, their parents were required to sign a contract and agree to leave their daughter there for at least a year. They couldn’t contact the child for at least three months.

The girls quickly discovered they would be forced to live by an authoritarian code of conduct that reflected the fundamentalist religious beliefs of their caretakers. Bible verses about “sinfulness” coupled with mental and emotional abuse were used to control the girls, according to the SPLC’s complaint.

Trisha and other girls were beaten with large wooden paddles for infractions such as saying something negative about the home to their parents on the phone or talking to other girls about leaving. Before the paddlings, administrators called the girls names like “dirty little rat” and “tramp,” Trisha said. One girl was paddled 24 times for cutting her wrists. One of the paddles had the phrase, “The board blistereth + the Lord blesseth” written across it.

“There was no ability to question the beliefs of the home without receiving physical abuse,” Trisha said. 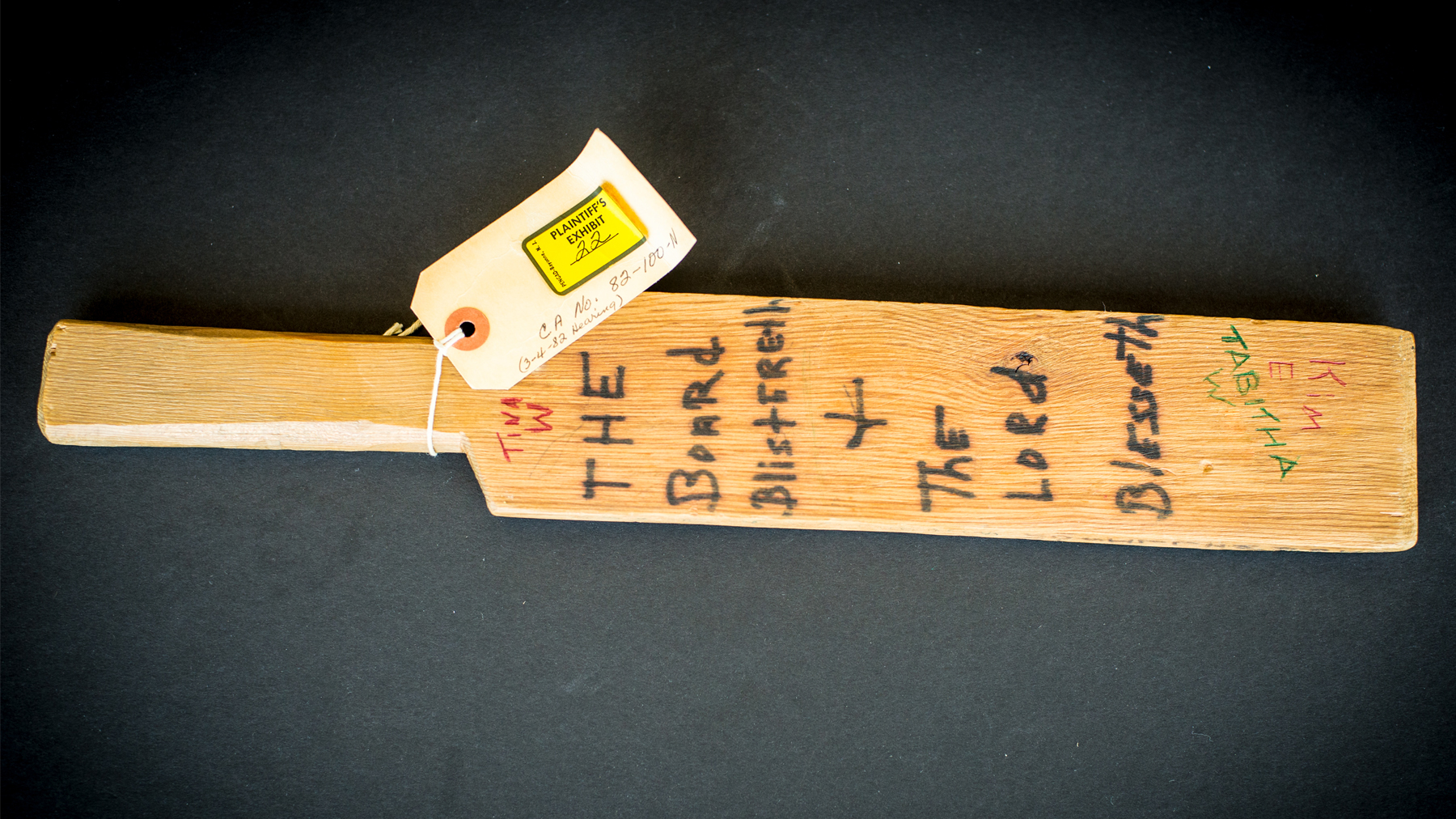 Trisha and other girls were beaten with large wooden paddles for infractions such as saying something negative about the home to their parents on the phone or talking to other girls about leaving. One of the paddles had the phrase, “The board blistereth + the Lord blesseth” written across it.

When the girls wrote home, their letters were read by Bethesda officials. They were forced to rewrite them until they were approved. Incoming letters were reviewed by the staff. Content deemed objectionable was blacked out.

Friendships were also discouraged – something Trisha experienced when she befriended another girl.

“When it came to light, we were moved to separate halls of the dorm and not permitted to talk,” she said of the friendship. “I did not follow that too well, and more than once ended up writing hundreds of [sentences as punishment] and then receiving ‘licks.’”

Despite the directors claiming they didn’t charge fees, the contracts parents signed stated that the home would accept a monthly donation of up to $250 to cover the costs of each girl.

More than $160,000 was received by the home in “gifts” from churches and individuals in 1981, according to court documents. Many pregnant girls were forced to give up their babies for adoption in exchange for a $250 payment – purportedly for medical costs.

A request for help

To Trisha, it appeared that nothing would ever change. But even before she arrived at Bethesda, events were in motion that would shut it down.

In the early 1980s in Alabama, a police officer asked SPLC founder Morris Dees for help. He needed someone to get his 19-year-old pregnant daughter – known as “Candy H” in court papers – out of Bethesda. The officer’s ex-wife had placed her there at the urging of a “radical religious minister,” Dees said.

Candy desperately wanted out. She had managed to beg her twin sister to “get me out of here” during a rare moment when a staffer supervising her phone call had left the room.

Dees was so alarmed by the horrors of Bethesda that he chartered a small plane to Hattiesburg.

“We found the small, concrete-block house and knocked on the door,” he said. “We saw girls in old-fashioned dresses listening to religious tapes. I called our client’s name and she quickly came.

“The minister rushed to the door, but we hastily drove her away. On the flight home, she told harrowing stories of mental and physical abuse the girls experienced.”

‘The devil means to do us in’

The SPLC filed a federal class action lawsuit in Montgomery in 1982 on behalf of Candy and the other girls who were still at Bethesda. It sought an injunction that would result in state oversight of the home, on the grounds that it was violating the civil rights of its residents.

“The devil means to do us in with all this stuff,” Wills, the home’s director, said during a 1982 interview with the Hattiesburg American. “But God will step in. People will hear about us that never have before. People don’t consider the alternatives. Turn them loose? To what?”

The lawsuit prompted a Mississippi judge in 1986 to declare that the home was operating illegally as a detention center and to grant temporary custody of nearly 120 girls to the Mississippi Department of Public Welfare.

After the judge’s ruling, welfare officials and sheriff’s deputies raided the home and removed all of the girls, including Trisha, who were sent to parents and guardians.

“I’ve never seen a church that locked up its congregation, censored its mail and listened in on its phone calls,” said Thomas Brittain, who was the Mississippi welfare commissioner at the time. 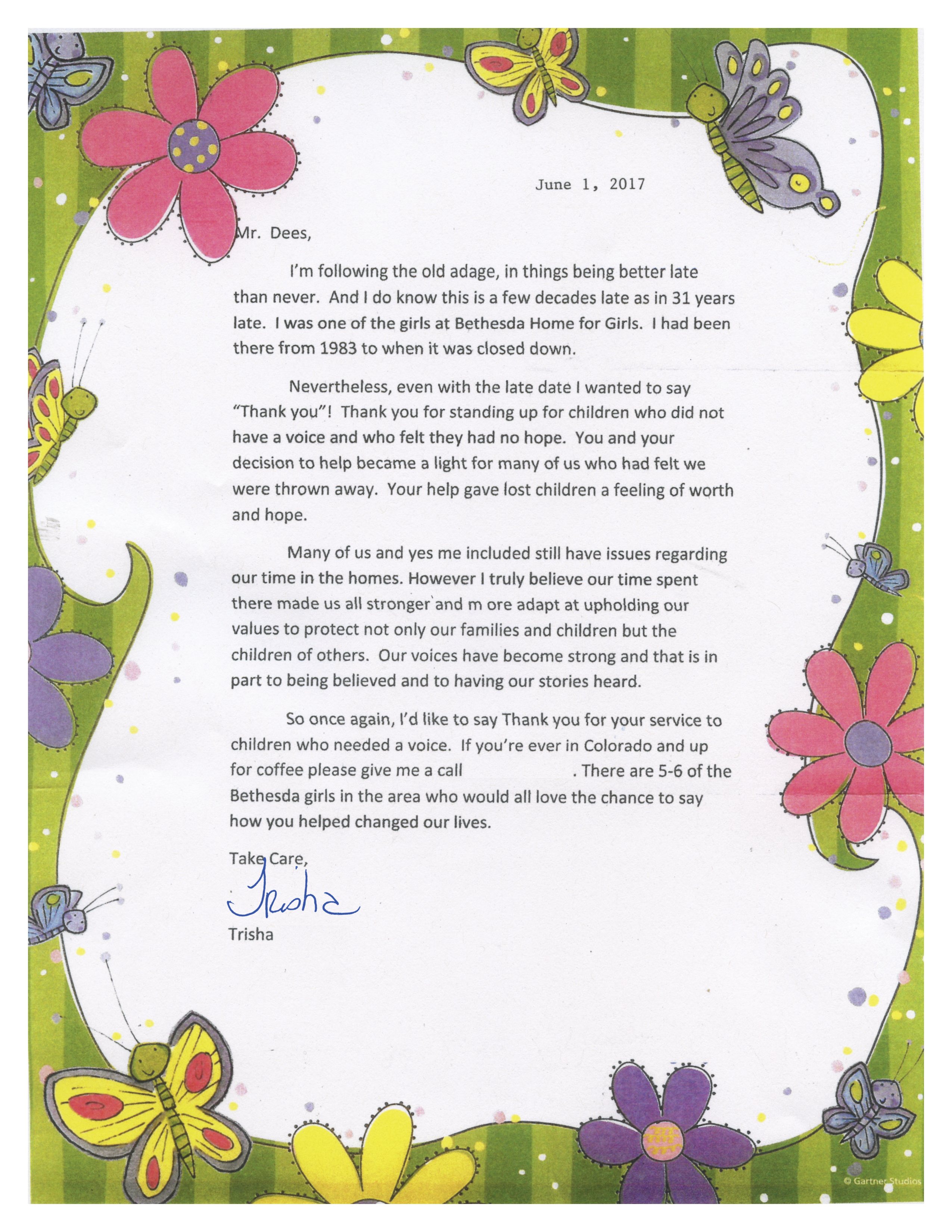 Trisha wrote a letter to SPLC founder Morris Dees to thank him for suing the Bethesda Girls School, which led to its closing in the 1980s.

Life after Bethesda wasn’t easy for Trisha. She had spent three years there, and afterward her parents sent her to another home for two more years. She was finally set free when she turned 18.

Trisha now lives in Colorado and has a 22-year-old son. She still suffers psychological problems due to Bethesda, but remains positive.

She’s grateful to Dees and the SPLC.

“You and your decision to help became a light for many of us who had felt we were thrown away,” she wrote in a recent letter to Dees. “Your help gave lost children a feeling of worth and hope.”