On Feb. 8, 1968, nine South Carolina patrolmen opened fire on a crowd of African-American students gathered around a bonfire on the campus of South Carolina State University (SCSU) in Orangeburg.

Samuel Hammond, Henry Smith and Delano Middleton were killed. Their names are now engraved alongside those of other martyrs on the Civil Rights Memorial near Southern Poverty Law Center.

Twenty-seven others were injured.

The nine officers who shot at the crowd were acquitted, and the state has never investigated the events of that night.

Now, 50 years later, the pain is still raw for the survivors and for the families, friends and former classmates of the victims. Last week, many of them gathered in the Smith-Hammond-Middleton Memorial Center at SCSU to commemorate the 50th anniversary of the Orangeburg Massacre.

“It hurts every time I hear it,” Walter Mitchell said in an interview. “I cry.”

Mitchell, a SCSU alum, was not present at the shooting. He was, however, among the students from SCSU and neighboring Clafin University, both historically black colleges, who were working to integrate the All-Star Triangle Bowling Alley. He was beaten during a protest at the bowling alley on one of the nights prior to the shooting.

“Nothing has changed,” Mitchell said. “These three kids are gone and we’re still here commemorating them, but they’re gone. We love them.”

Mitchell sat in the front row throughout the ceremony, clutching his son John Mitchell’s shoulder as he listened, weeping, to speeches. 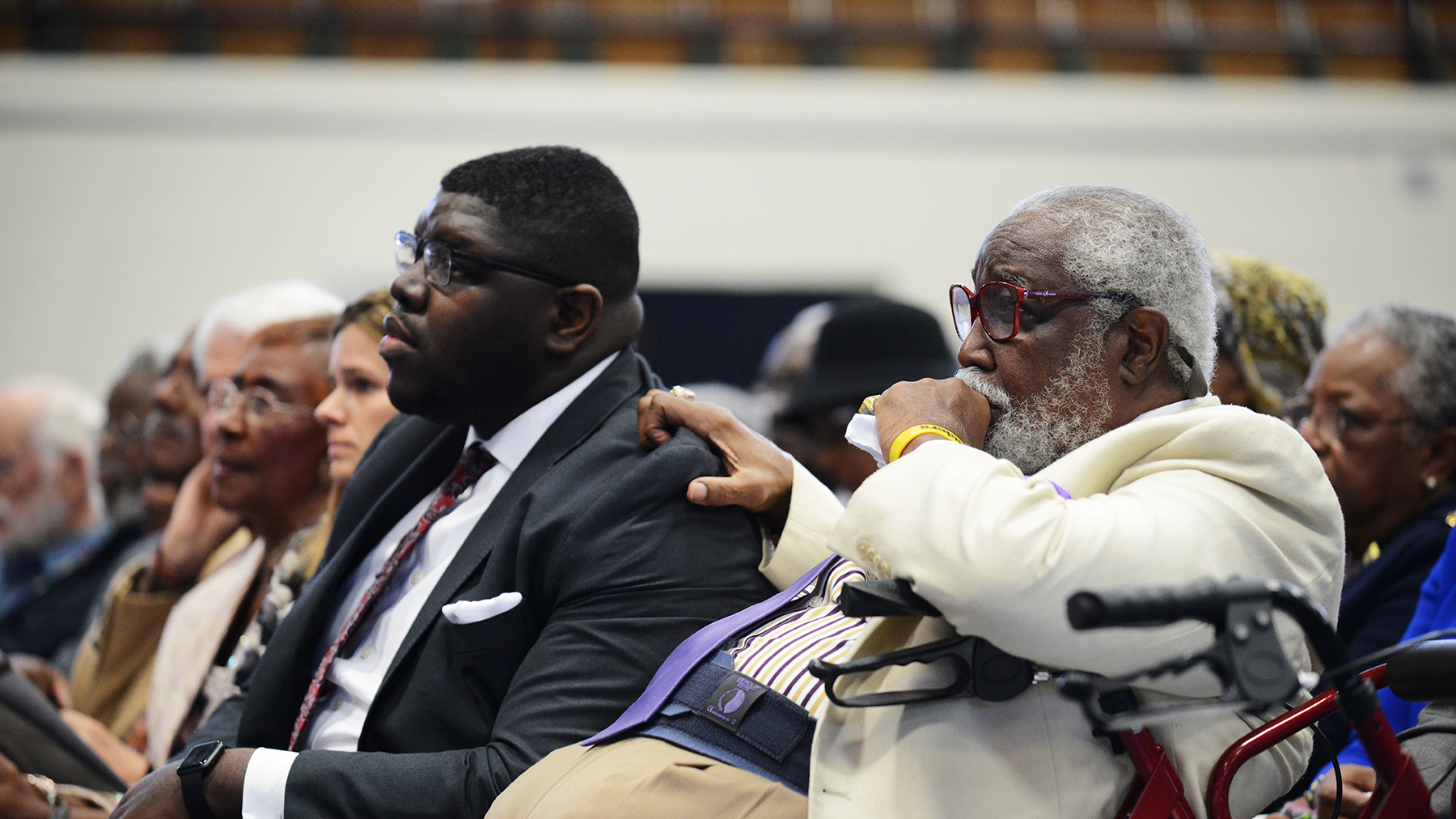 Walter Mitchell and his son John Mitchell listen to speeches during a ceremony commemorating the 50th anniversary of the Orangeburg Massacre, which occurred on February 8, 1968, when Walter Mitchell was a student at the historically black South Carolina State University in Orangeburg. Mitchell was among the students who tried to integrate a local bowling alley. On the third day of protests, South Carolina patrolmen fired shots into a crowd of students on campus, killing three of them.

Former South Carolina state Rep. Bakari Sellers gave the keynote address. His father is Cleveland Sellers, an organizer with the Student Nonviolent Coordinating Committee (SNCC) who was shot in the shoulder that night. He was later convicted of inciting a riot – the only person convicted of a crime in relation to the massacre – and sentenced to manual labor.

Bakari Sellers became emotional during his speech and spoke through his tears.

“The stand made, the price paid. And I have to ask, was it even worth it? It’s a tough question, I know. After all the years and sacrifice and struggle, all the tears shed and blood spilled, the doubt hurts but we have to ask because if we do not, others will and we cannot allow others to write our history.”

Charleston Mayor John Tecklenburg drew parallels to the massacre of nine African-Americans by a white supremacist at Mother Emanuel AME Church in 2015. 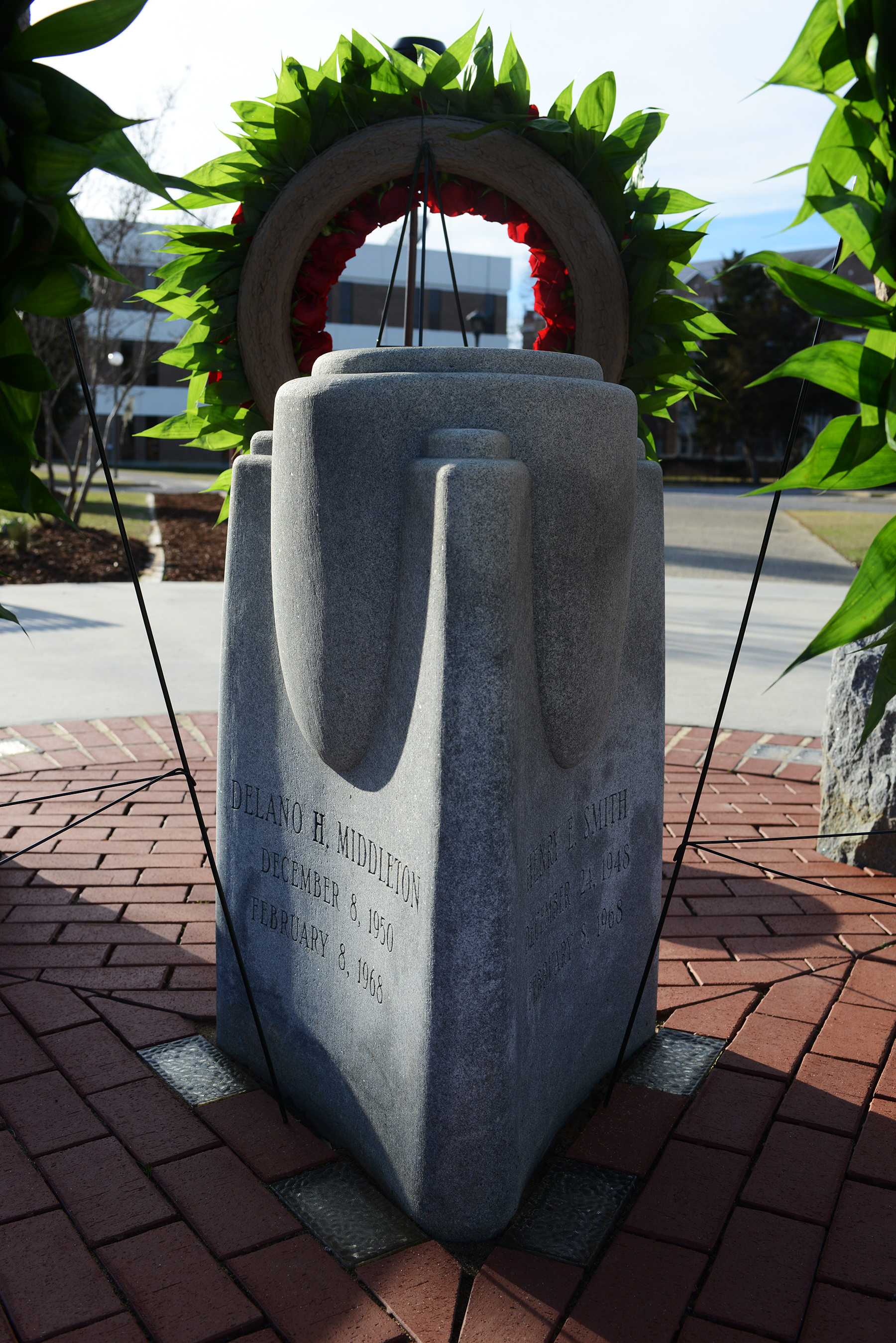 The names of Delano Middleton, Samuel Hammond and Henry Smith, who were killed during the Orangeburg Massacre on Feb. 8, 1968, are engraved on a monument at South Carolina State University. The monument also recognizes the 27 students who were injured when nine South Carolina patrolmen opened fire on a crowd of students on campus. The students had been working to integrate a local bowling alley.

John Mitchell, the son of Walter Mitchell, echoed that sentiment.

“[It’s] very grounding to know that my dad was part of something in a time, in a climate very similar to the climate that we’re living in today. So knowing that I come from that stock keeps the energy in me to continue that fight as we progress towards a higher goal. I’m very thankful to be able to stand on their shoulders.”