When Sandra Starr's stepfather molested her as a child, she went into a "dark place."

While growing up, she rebelled against her mother, fell in with the wrong crowd, and fell in love with a drug dealer, who fathered a baby girl with her.

The boyfriend abused her, too. On one of those occasions, she said, he was choking her when she pulled a gun from her purse and shot him.

“If he didn’t hit me, he didn’t love me,” Starr said. “It got so severe I couldn’t take it anymore, so I fought back. When I decided to fight back, it became a tragedy which landed me in prison with a life sentence.” 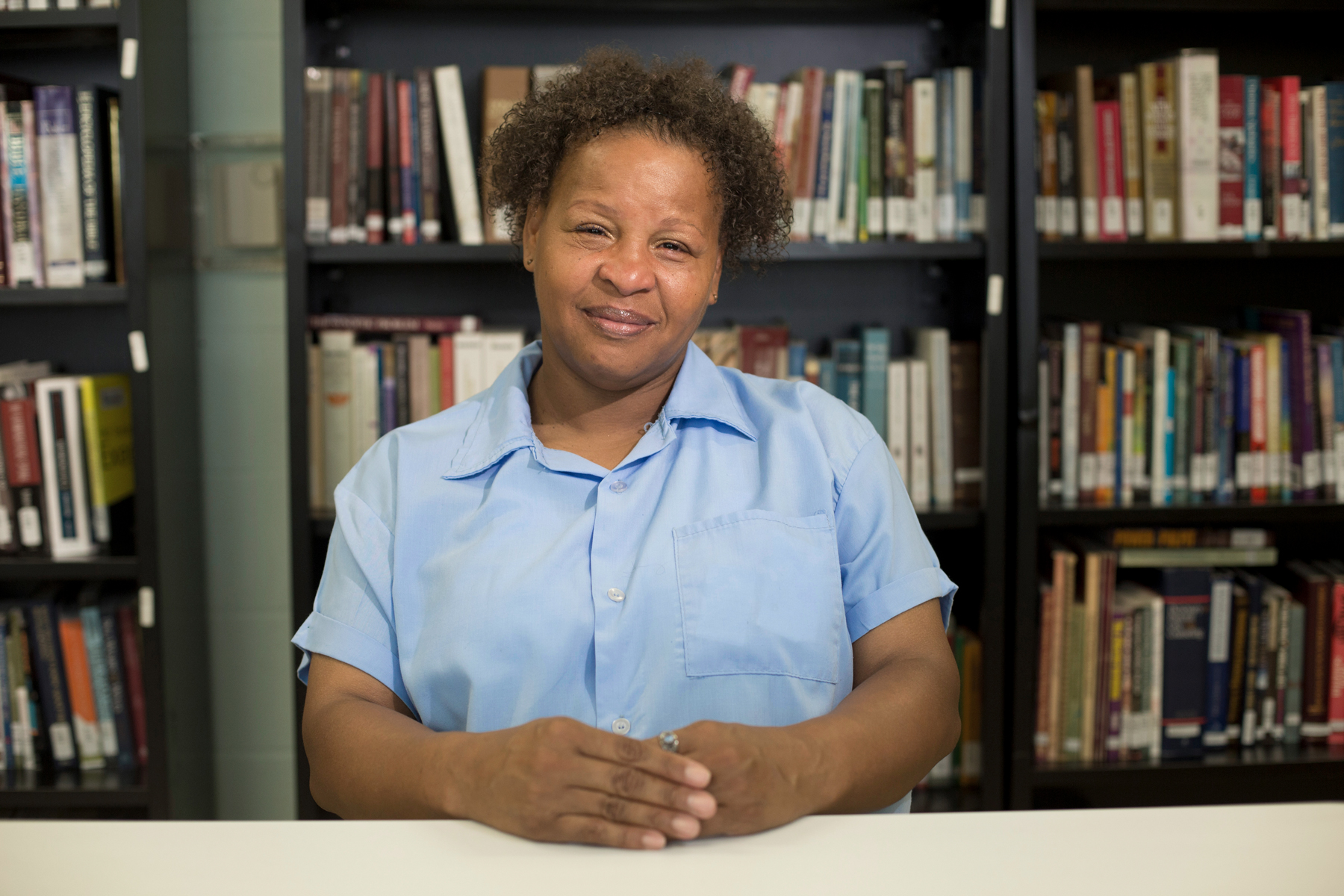 Sandra Starr is serving life in prison without parole at the Louisiana Correctional Institute for Women.

Louisiana is one of only two states in the country that has a mandatory life sentence without parole for second-degree murder. To address laws like this that made Louisiana the incarceration capital of the world, a Justice Reinvestment Task Force reviewed the state’s policies and recommended a number of changes aimed at reducing the prison population, saving tax dollars and improving public safety.

Starr – like the other “lifers” at Louisiana Correctional Institute for Women – the state’s only women’s prison – and Louisiana State Penitentiary, better known as “Angola,” – watched with anticipation as lawmakers considered these criminal justice reforms in the 2017 session.

As the recommendations worked their way through the Louisiana Legislature, 10 bills passed, but the language that would give people serving long sentences like Starr an opportunity to share their stories with a parole board was left on the cutting room floor.

The legislation would have extended parole eligibility to those who have served 20 years and are reaching age 45, and would have made most lifers eligible for parole after serving 30 years in prison and reaching age 50.

Still, the recommendations and newly proposed legislation seeking those same parole eligibility terms that were dismissed last year have given hope to Starr, who says she is a different person than she was at the time of the shooting. Now, she shares her wisdom with younger women in prison, whom she mentors.

“Hope is all you have throughout your whole life to hold onto,” Starr said. “Have hope. Keep hope. Don’t let it die.”

Her children, who were 4 and 7 when she went to prison, were bullied in school because their mom was a lifer. Now, they’re grown with children of their own. She has missed birthdays and graduations, first kisses and heartbreaks.

“I left her as a baby, left him as a baby, but this is a grown man or woman standing in front of me that I don’t know because I didn’t raise them,” Starr said. “That’s hard.”

For Starr, a chance at parole would be an opportunity to reconcile with her children.

“I just want to sit down with my two grown children I left as babies and tell them it was my fault, and I’m sorry for leaving them,” she said, holding back tears. “We just have to pick up the pieces where we are and try to go forward.”

Louisianans for Prison Alternatives (LPA) – a statewide coalition of diverse stakeholders including formerly incarcerated people, crime survivors, faith leaders and other community advocates – is continuing its fight for changes to parole eligibility, among other reforms that will make Louisiana’s criminal justice system more effective.

“We’ve condemned hundreds of Louisianans to die in prison, without assessing how that affects these individuals, their families and our communities,” said Sarah Omojola, policy counsel for the Southern Poverty Law Center (SPLC), a member of LPA. “These harsh sentences are solely punitive, failing to account for whether a person can be rehabilitated and no longer pose a threat to public safety.”

Studies have shown that long sentences are no more effective than short ones. Our country’s prison population has ballooned in large part because of longer prison sentences and stricter release policies, according to a recent report by the Urban Institute titled “A Matter of Time: The Causes and Consequences of Rising Time in America’s Prisons.”

“Attempts to end mass incarceration have largely focused on reforms for nonviolent and less serious convictions, but that won’t be enough,” the report states. “We can’t tackle mass incarceration without addressing long prison terms.”

Men who first walked through the gates at Angola in their late teens and early 20s are growing old in prison. Some are on medications, and others receive major medical treatment like dialysis – all paid for out of the state’s prison budget.

“As more people spend more time in prison, states spend millions housing an aging prison population despite evidence that many of these people could be safely released,” the Urban Institute report states.

Seventy-six percent of the people housed at Angola will die within its concrete walls. Death is a hard reality for many there.

This summer, members of LPA and the SPLC toured the two prisons, meeting people serving life sentences to learn about their time in prison and what the possibility of parole would mean to them.

Here are stories of some of those people. All of them, like Starr, are serving mandatory life sentences for second-degree murder: 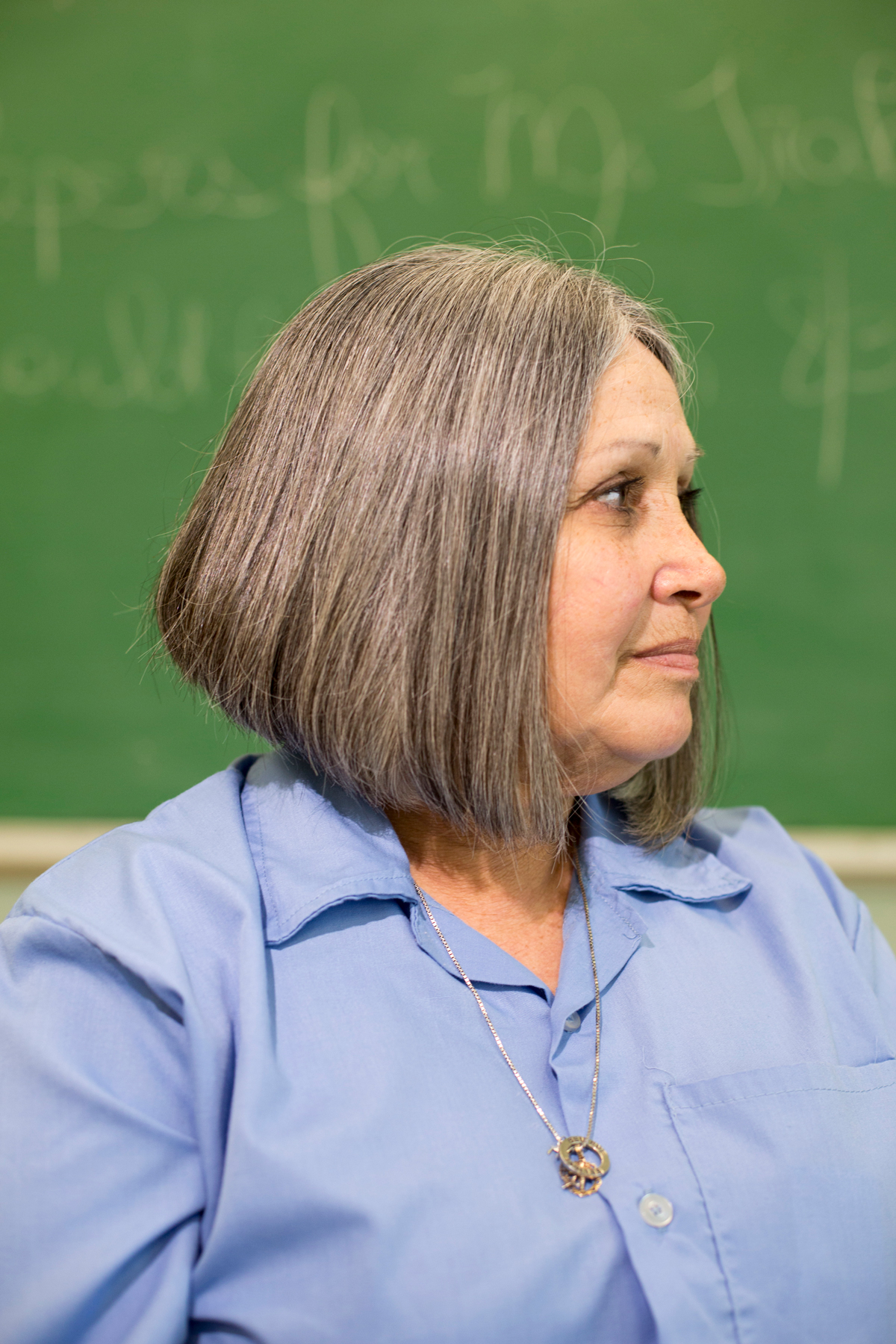 Sabrina Parks has served 36 years of her life sentence in Louisiana.

Sabrina Parks has gray hair and kind eyes, and speaks with a pleasant demeanor while describing her Christian faith. Although she may look like your average 61-year-old woman, her life is anything but average.

Parks teaches seminary classes at the Louisiana Correctional Institute for Women, where she has served 36 years of her life sentence. Since she was placed behind bars at 24, Parks has found God, mentored countless young women, and connected with her biological mother, through the woman who adopted her as a baby.

When Parks was first sentenced to life in prison, she was naïve and emotionally immature, she said. But over time, she has healed. In fact, she’s at peace with her incarceration.

“I don’t think I would have ever become the woman I am today had I not been incarcerated,” she said. “Thirty-six years is a long time, but it’s been 36 years of experience. It’s not in vain at all. Do I want to go home? Sure. And I know when the time is right the door is going to open.”

Parks, like Starr, is just asking for an opportunity. They aren’t asking for freedom, and parole eligibility would not guarantee that. They are looking for a chance to prove they aren’t the same as when they got to prison. They have found redemption by seeking opportunities to learn and change and develop. They want to reunite with their families and give back to their communities.

“I can’t go back and undo what I’ve done. I can’t,” Parks said. “And I could never repay for what I’ve done. But at the same time, I would like to have the opportunity to give back to society.” 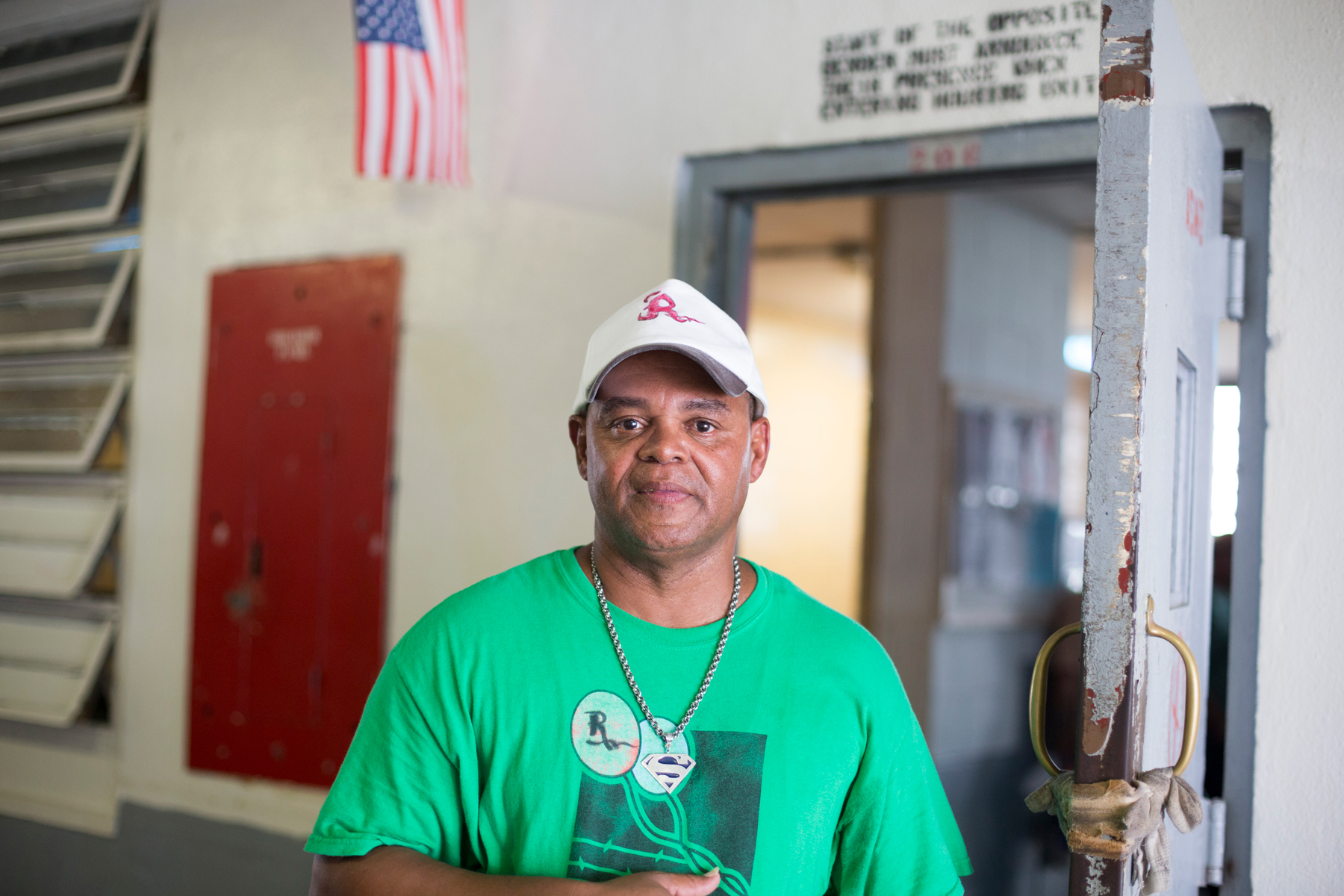 Aaron Brent grew up in Baton Rouge, but he’s been at Angola since he was 19.

Aaron Brent, also 61, started working with Angola’s health care program after a friend of his died. He figured the elderly men there would relate to him because “they know I grew up in the prison with them.” He feeds them and keeps them company.

“When I bring a smile to those patients’ faces, it does me all the good in the world,” Brent said. “It helps my heart. It’s a passion with me and these patients.”

Brent grew up in Baton Rouge, but he’s been at Angola since he was 19.

“I was young, trying to be accepted, and I did foolish things,” Brent said. “It’s been 41 years that I’ve been trying to do everything I can to do the right thing.”

When Brent first got to prison, he did not want to be seen as weak, so he acted out. Now, he wants to set an example for young people at Angola – including his son and younger brother, who are also incarcerated there.

“In order for me to tell them the things not to do, I had to make a change myself,” Brent said. “I can’t tell you what to do if I haven’t made a change, so I have to lead by example.”

If he were eligible for parole, Brent would want to take that same mentorship to youth in his community. He’s learned a hard lesson at Angola that he hopes others don’t repeat.

“Give us the opportunity to show that we can be productive people in society,” Brent said. “All we want to do is show that we have changed.” 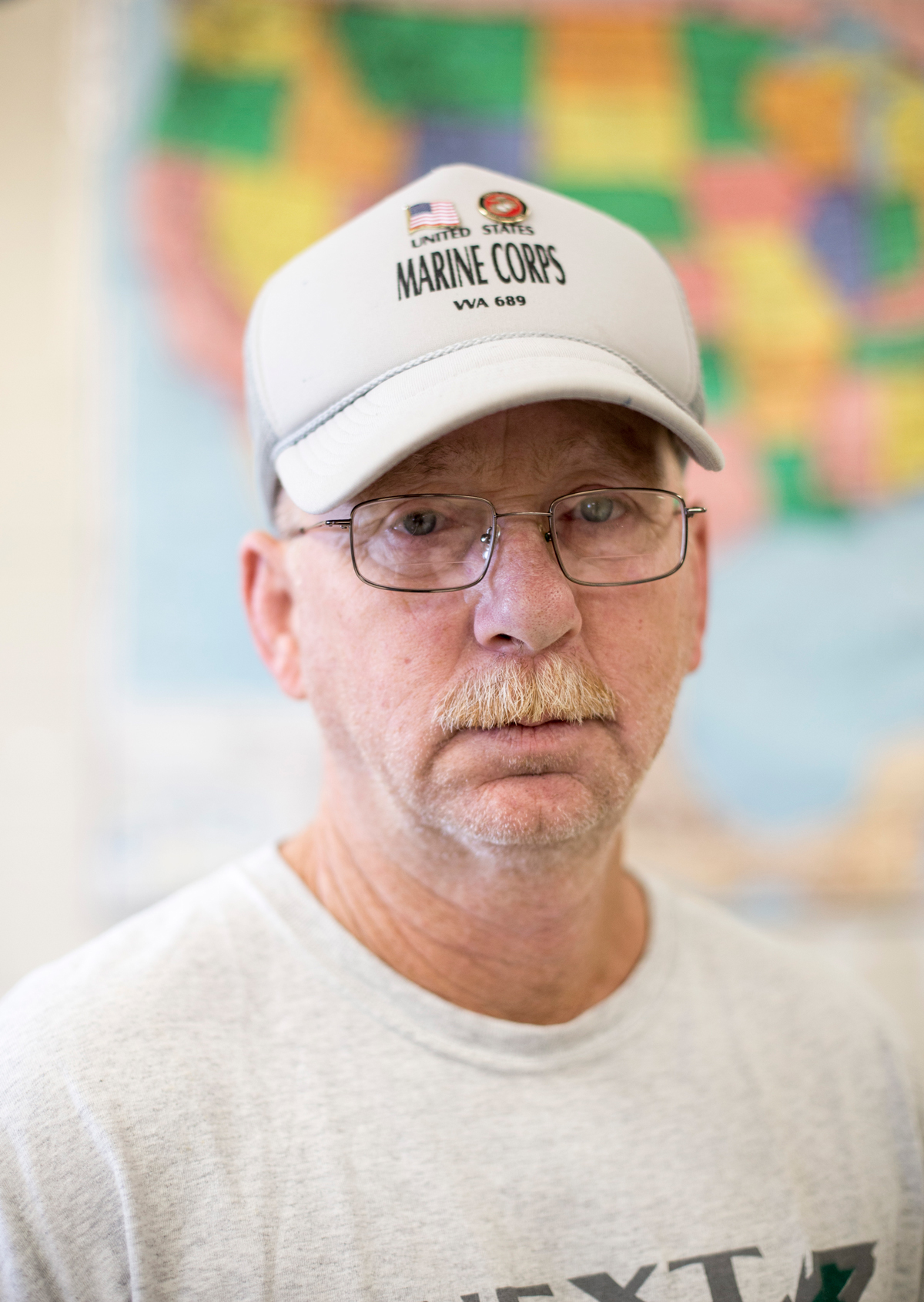 John Richard, 58, who came to Angola in 1988, also wants to reunite with his family.

“About the only thing I really want for myself is to spend time with my grandchildren, teach them the word of God and to maybe help them from making the mistakes I did,” he said in his thick Cajun accent. “I realize I have a lot to pay back, and I don’t mind doing that, because if I can stop just one senseless act like that from happening again, I’ll feel like I accomplished something.”

For now, Richard is focused on doing as much as he can to help those inside prison. He tutors people taking GED and seminary classes. He’s one of the people responsible for delivering death messages – letting incarcerated people know a loved one has passed – and follows up with grief counseling.

“There’s people that’s been here for 30-plus years. These people don’t have an ounce of vindictiveness or an ounce of violence in them anymore. They’ve outgrown that,” Richard said. “There’s a lot of people [who] could really help the communities if given the opportunity.”