Mississippi’s lifetime voting ban strips citizens of their right to vote for many offenses, such as writing a bad check or stealing wood.

It disproportionately harms African-American voters. It even lets legislators decide whose voting rights to restore. And it’s unconstitutional for all of those reasons, according to a suit filed today on behalf of Mississippians seeking to regain their right to vote.

The lawsuit, filed on the plaintiffs’ behalf by the SPLC and the law firm Simpson Thacher & Bartlett LLP, states that Mississippi’s lifetime voting ban violates the Eighth Amendment’s prohibition on cruel and unusual punishment as well as Section 2 of the 14th Amendment.

The lawsuit also challenges Mississippi’s legislative process for restoring citizens’ voting rights. This process, the lawsuit states, violates citizens’ First Amendment right to political expression and association, and violates the Equal Protection Clause of the 14th Amendment on two grounds: First, it arbitrarily grants or deprives American citizens of the right to vote. Second, it was intended to discriminate on the basis of race. 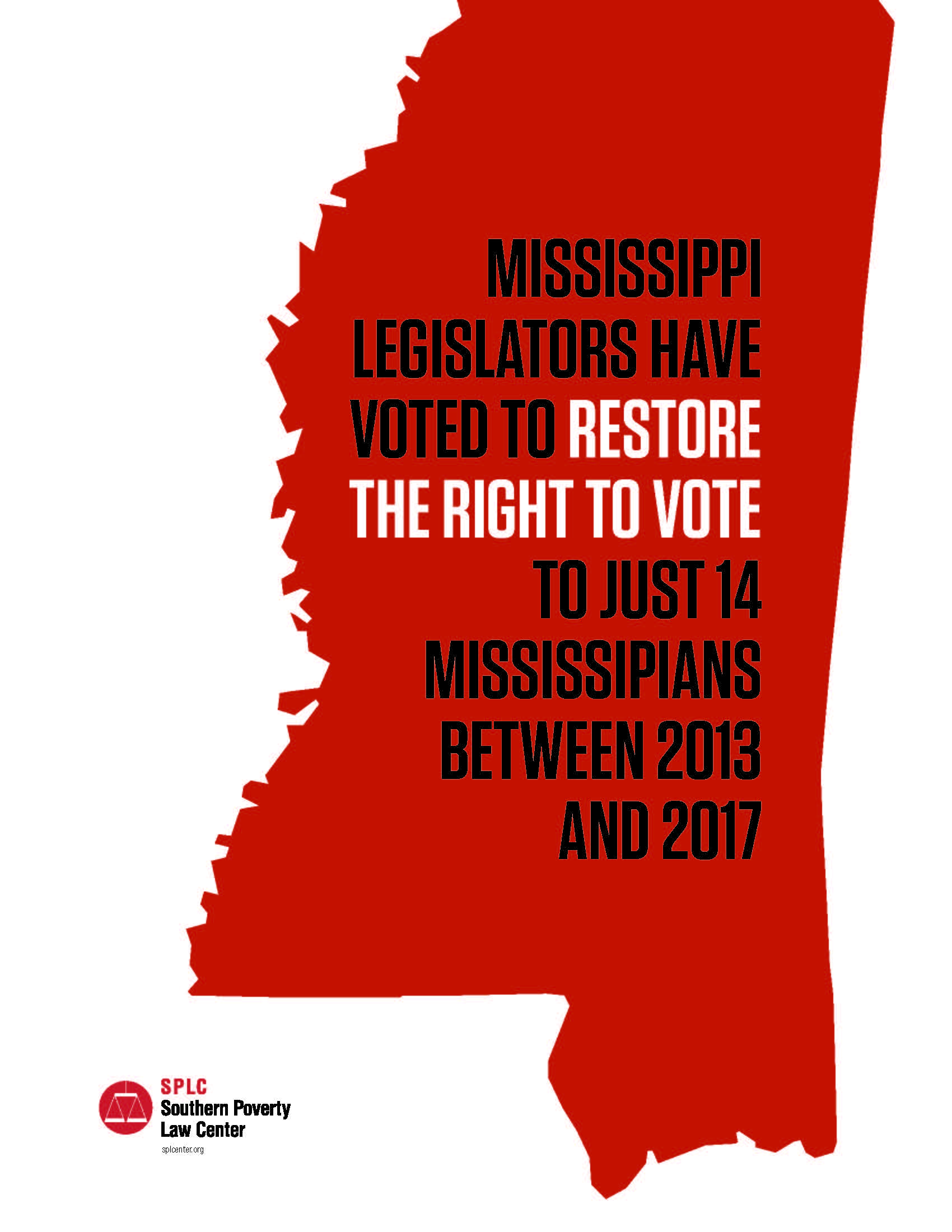 “Mississippi’s disenfranchisement statute is an extension of slavery and suppression of human rights,” said Jody Owens, managing attorney for the SPLC. “Our clients are citizens who made a mistake, paid their debt to society long ago, and now live and work alongside us, pay taxes, worship with us, fight in our wars, send their children to school with ours, and are equal members of our society in every way save one – they have no say in our representation in Mississippi and in Washington.”

Mississippi is one of only four states to impose lifelong voting bans on its citizens for convictions of all disenfranchising offenses. Banned voters in Mississippi are also more likely to be African-American.

Mississippi also has a complicated legislative “suffrage bill” process for restoring citizens’ voting rights. Only a handful of citizens succeed in persuading a legislator to introduce a bill on their behalf. Of bills introduced, most fail to win the required votes in both houses of the Legislature.

Plaintiff Herman Parker lost his right to vote when he was convicted of grand larceny in 1993. More than 14 years after completing his sentence, he was able to convince a representative to sponsor a suffrage bill. The House of Representatives voted in favor of the bill, but it failed in the Senate. As a result, Parker is still banned from voting.

“I’m a husband and father of two beautiful children, and I’m proud to have worked for the city of Vicksburg’s housing authority for over a decade,” Parker said. “I’m not that 19-year-old boy anymore – I’m a man and deserve a voice in government because of who I am today.”

Plaintiff Dennis Hopkins was convicted over 20 years ago of grand larceny. Since then, he has become a business owner, coaches T-ball, baseball, and softball teams, and founded a championship-winning peewee football team. He and his wife of 13 years – an elementary school teacher and school bus driver – have been foster and adoptive parents, and they are raising eight children. 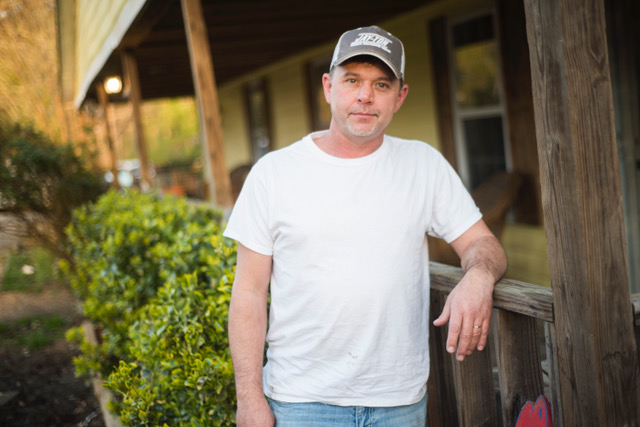 “We salute the flag at the games, but part of me feels like it isn’t for me, even though I work, pay taxes, and try every day to do right by my family and God,” Hopkins said. “In school, they teach our kids that everybody’s vote counts, but no matter how I’ve lived for the past 20 years, I don’t count, not my values or my experience. I have paid Mississippi what I owe it in full, but I still can’t cast my vote for my children’s future.”

Plaintiff Wayne Kuhn is a U.S. Army veteran who was convicted of grand larceny over 18 years ago. His record has since been expunged, and for years he has ministered to homeless and incarcerated men about overcoming drug addiction. In those classes, Kuhn said, “I teach you can turn your life around by doing the right thing because God forgives, but I know Mississippi doesn’t.” 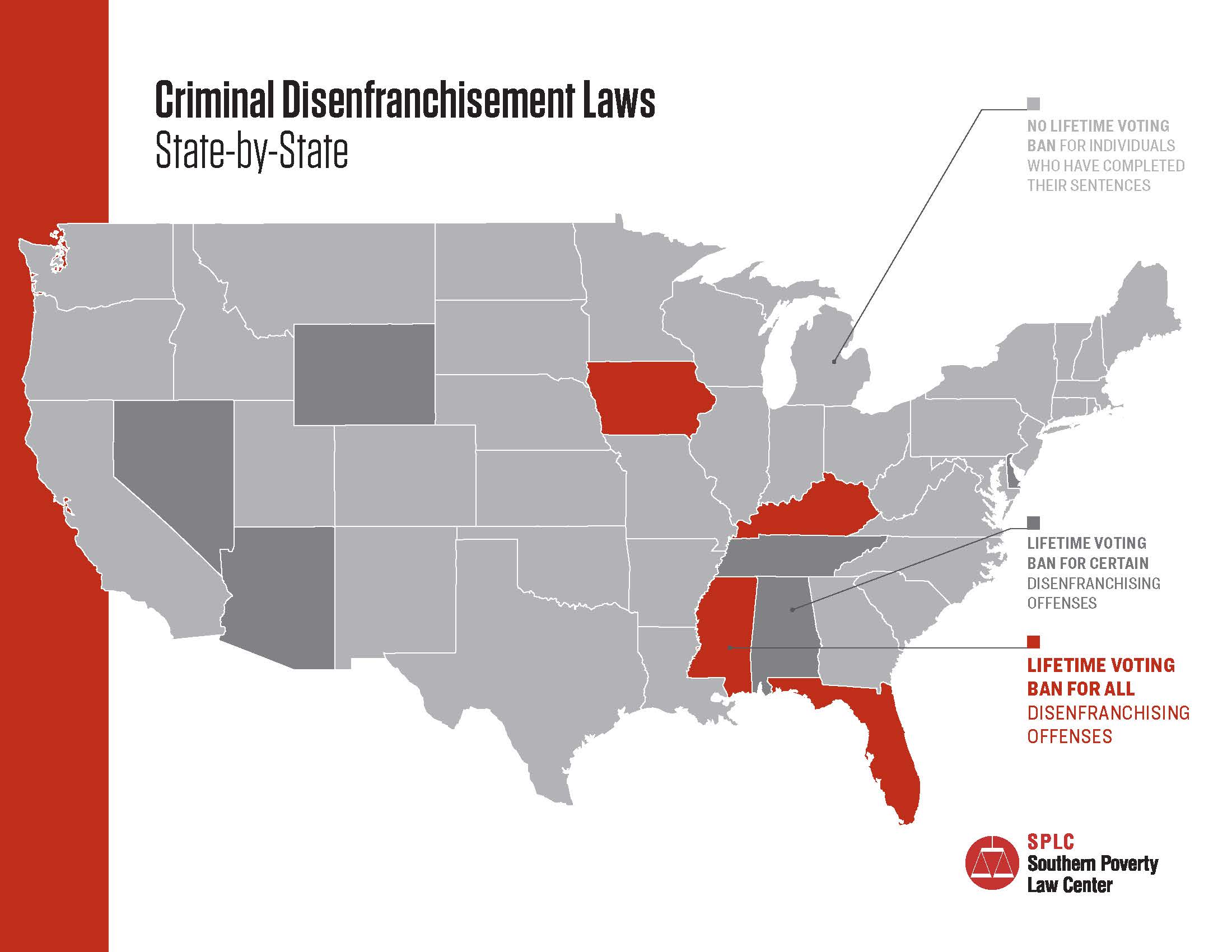 “As a result of both litigation and legislation, states around the country are moving away from disenfranchisement,” said Lisa Graybill, deputy legal director for the SPLC. “These laws are a legacy of Jim Crow and have no place in today’s society.”