Early on the morning of April 4, Angela Jackson of Memphis stood at the intersection of Beale and South Fourth streets, holding a sign reading “I Am a Man.”

She was there to reenact a famous photograph by Memphis photographer Earnest Withers, who covered the 1968 Memphis sanitation workers strike. 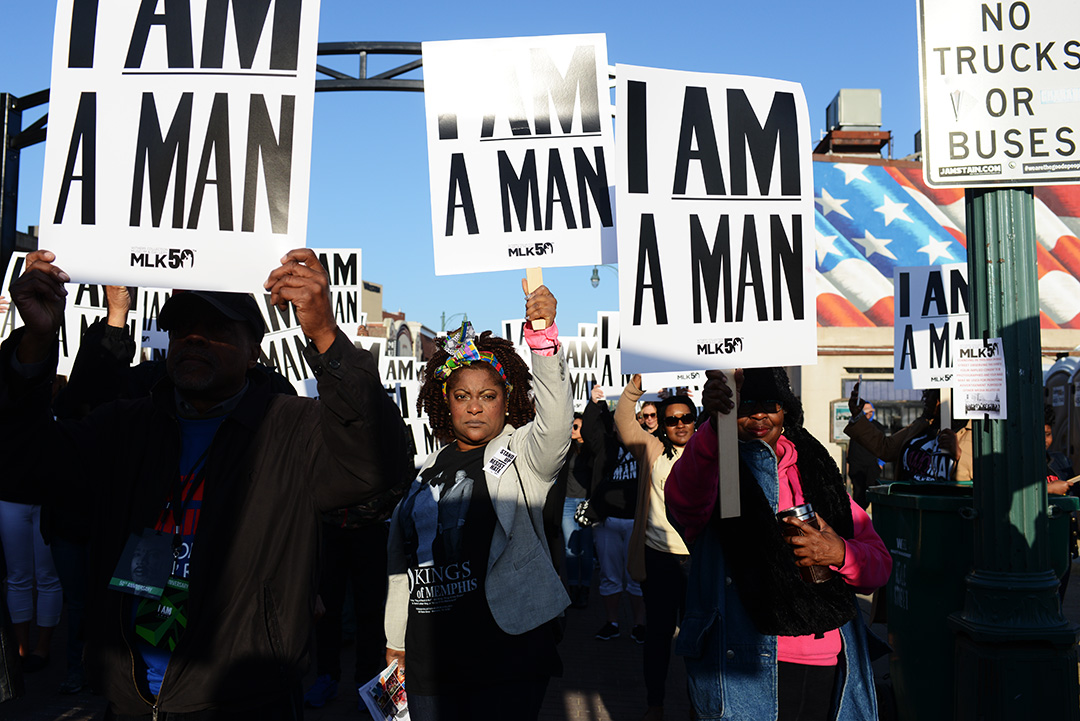 The strike was the reason Dr. Martin Luther King Jr. was in Memphis, where he was assassinated on April 4, 1968. At the time, King and other civil rights leaders were organizing the Poor People’s Campaign, fueled by the idea that racial justice could not be won without economic justice.

After the official photo was taken this past Wednesday, music played and the emcee told people to turn to one another and say, “I love you.” Dean Lucas of Chicago hugged Lisa Handchin of Orlando and shouted, “I love you!” Lucas said his family was from Memphis — and he was old enough to remember the events of 1968. Handchin said, “I believe in everybody having equal rights. I just wanted to be part of it.” 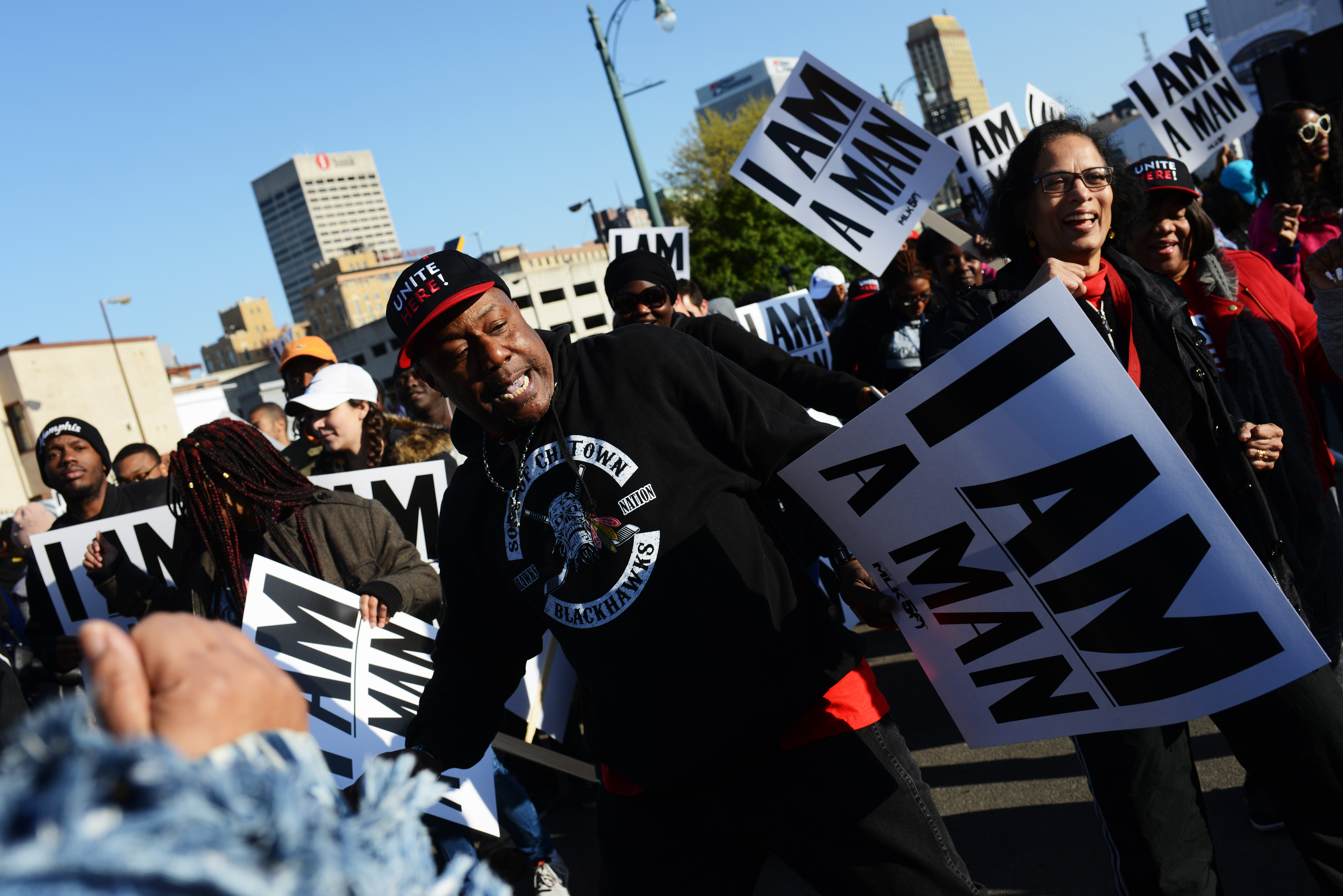 Lucas, wearing a cap embroidered with the words “Unite Here,” joined a group of dancers in the middle of the intersection as “The Cupid Shuffle” started to play over a loudspeaker.

Up the street, a larger crowd had gathered, bearing “I Am a Man” signs, wearing “Unite Here” caps and t-shirts printed with the names and numbers of the unions they represented. They waited to march to the Mason Temple, where King delivered his final speech to striking sanitation workers who had turned out in pouring rain on the night before he died.

A mile away, Julian Bolton of Memphis sat in the hard pews of Calvary Episcopal Church for a service dedicated to reconciling the city’s history of slavery and racism. 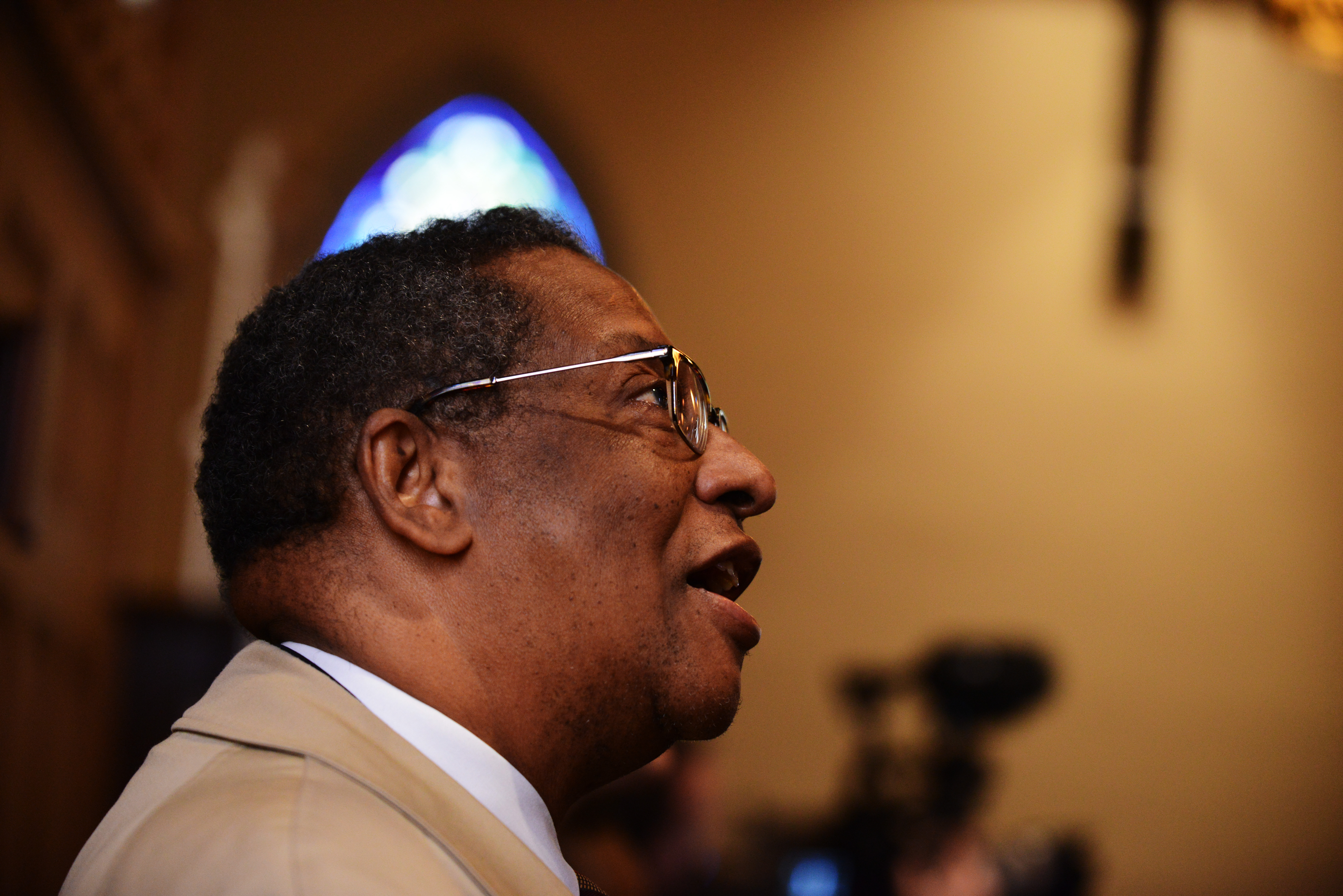 The church sits next to the site of a slave auction operated by Nathan Bedford Forrest from 1854 to 1860. A class of Rhodes College history students researched the auction, tracking down the names of enslaved people sold there. After the service, a National Parks Service monument recognizing the site’s bloody history was unveiled.

During a sermon, the Rev. Dorothy Sanders Wells, a rector at St. George’s Episcopal Church, spoke about the painful legacy of slavery and our collective responsibility to account for the past.

“[T]here’s a lot of painful stuff in our history, but now we walk a reality together,” she said. “And together we must hold one another not in bitterness not in anger but in love. And now, in accountability. Because now it is up to us to redress the wrongs of the past. Now it is up to us to figure out how we move to a better place in the future.” 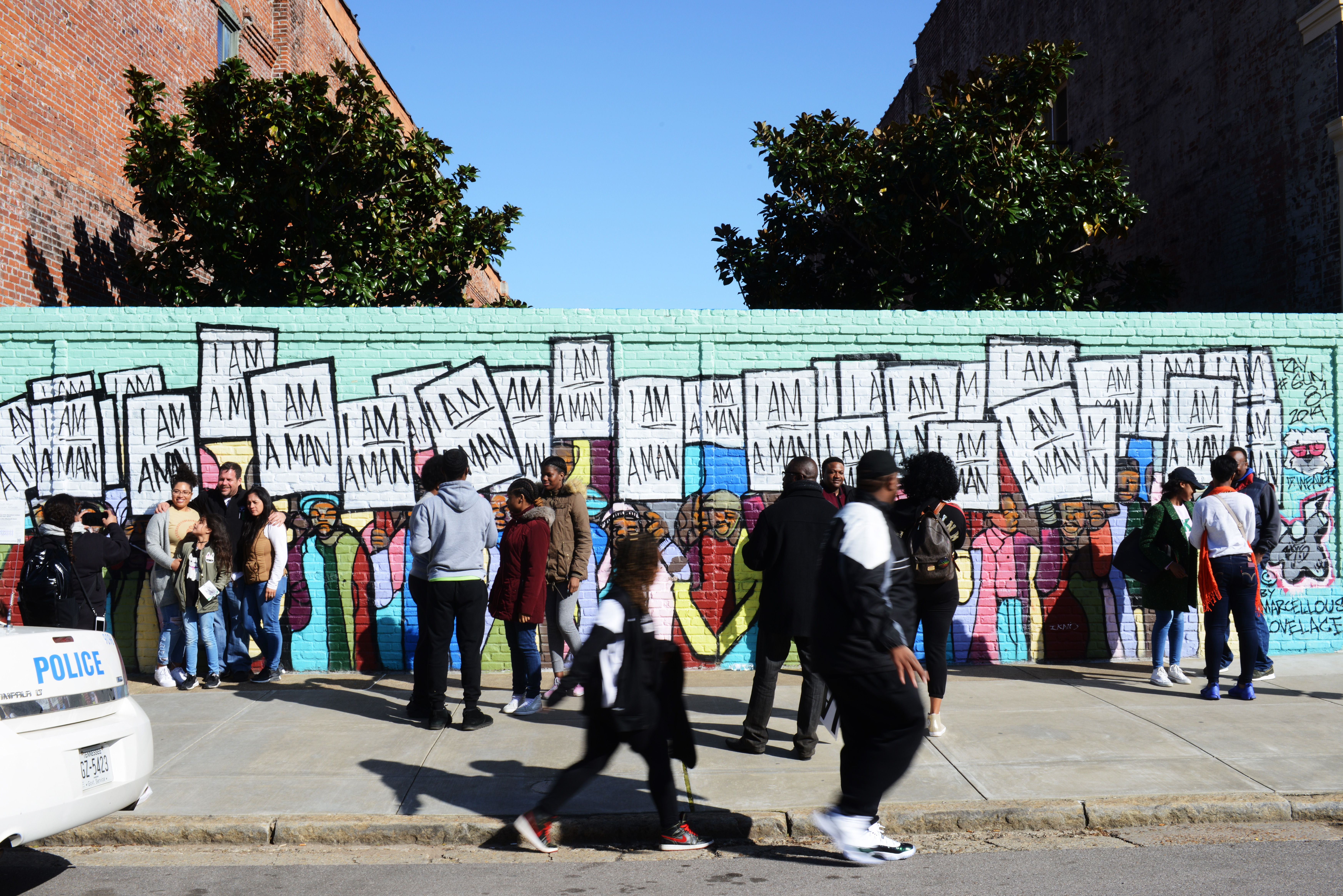 A mile away on South Main Street, pedestrians strolled by a brightly painted mural based on Withers’ photograph of the striking sanitation workers. Some stopped to take selfies and pictures in front of it. The mural, painted in 2014 by Chicago artist Marcellous Lovelace, is a reminder of the role the sanitation workers strike played in the city’s history and the civil rights movement. 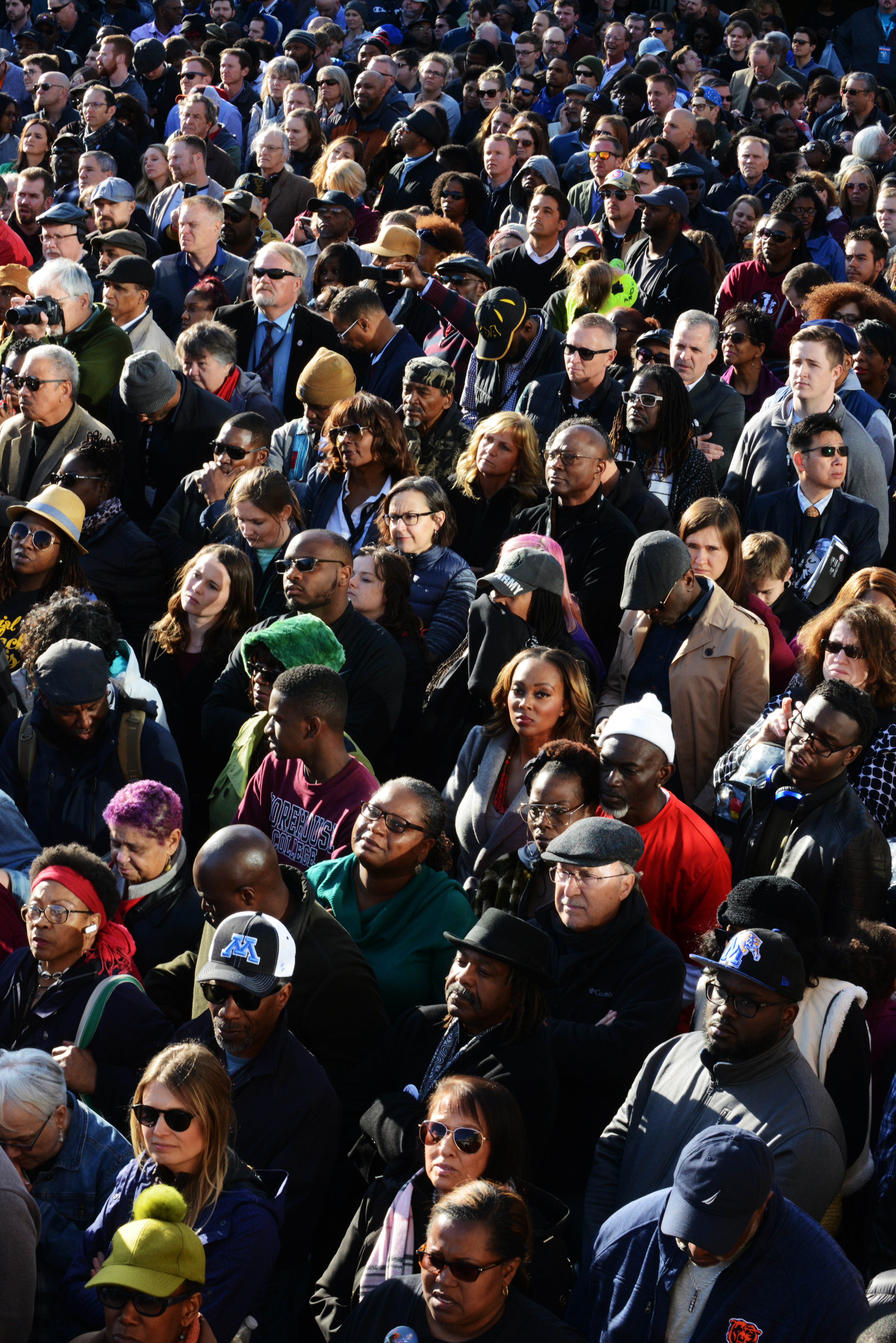 A few blocks away, people stood shoulder to shoulder on a barricaded street, listening to speeches and performances outside the National Civil Rights Museum at the Lorraine Motel. Memphis police estimated that the crowd numbered 10,000, according to the Associated Press. 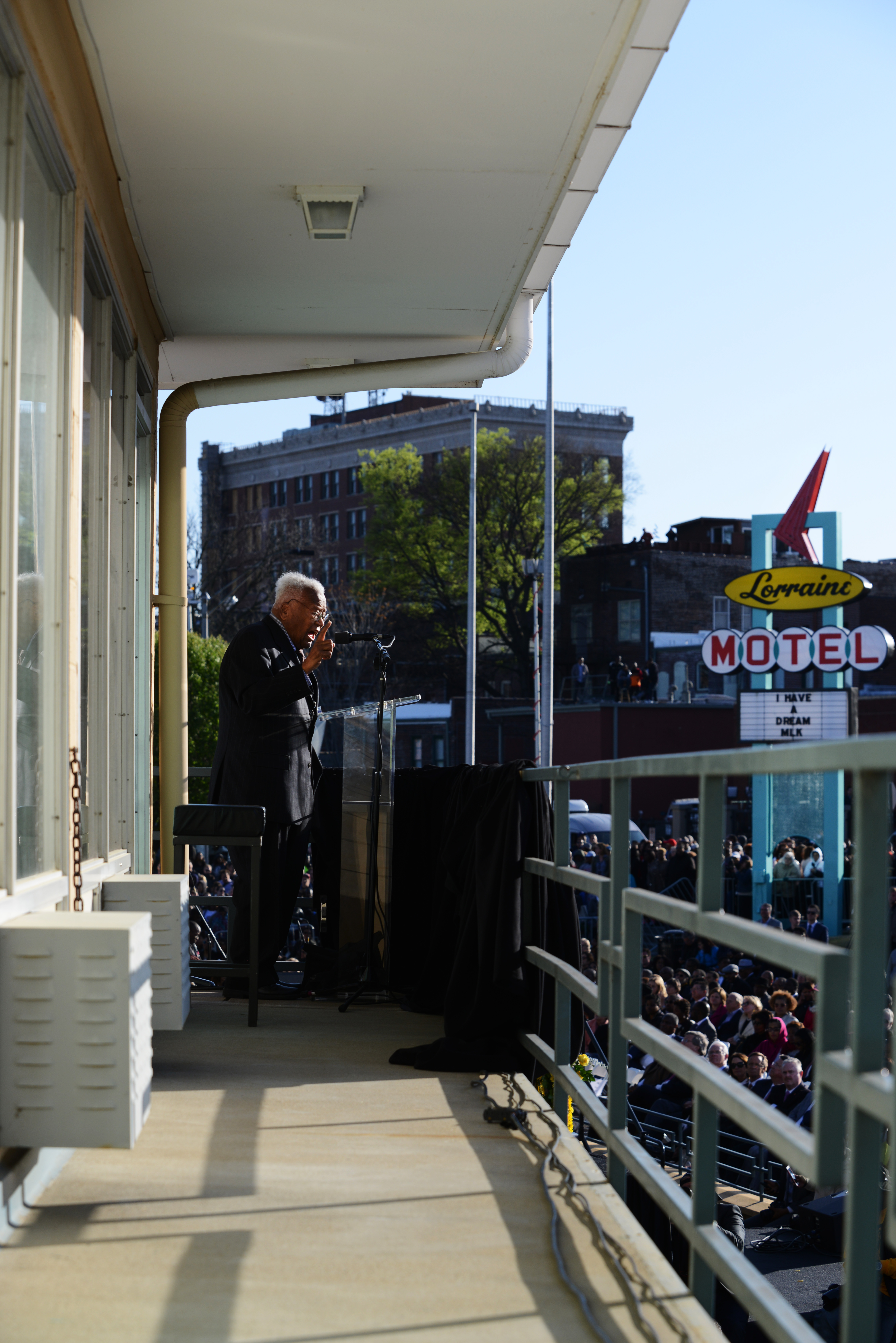 The Rev. James Lawson stood on the balcony of the Lorraine Motel — in the very spot where King was assassinated — to address a crowd gathered to honor the civil rights leader’s legacy.

Lawson, who was a Memphis minister, was instrumental in organizing the Memphis sanitation workers strike. King described him as “one who has been in this struggle for many years; he’s been to jail for struggling; but he’s still going on, fighting for the rights of his people.” 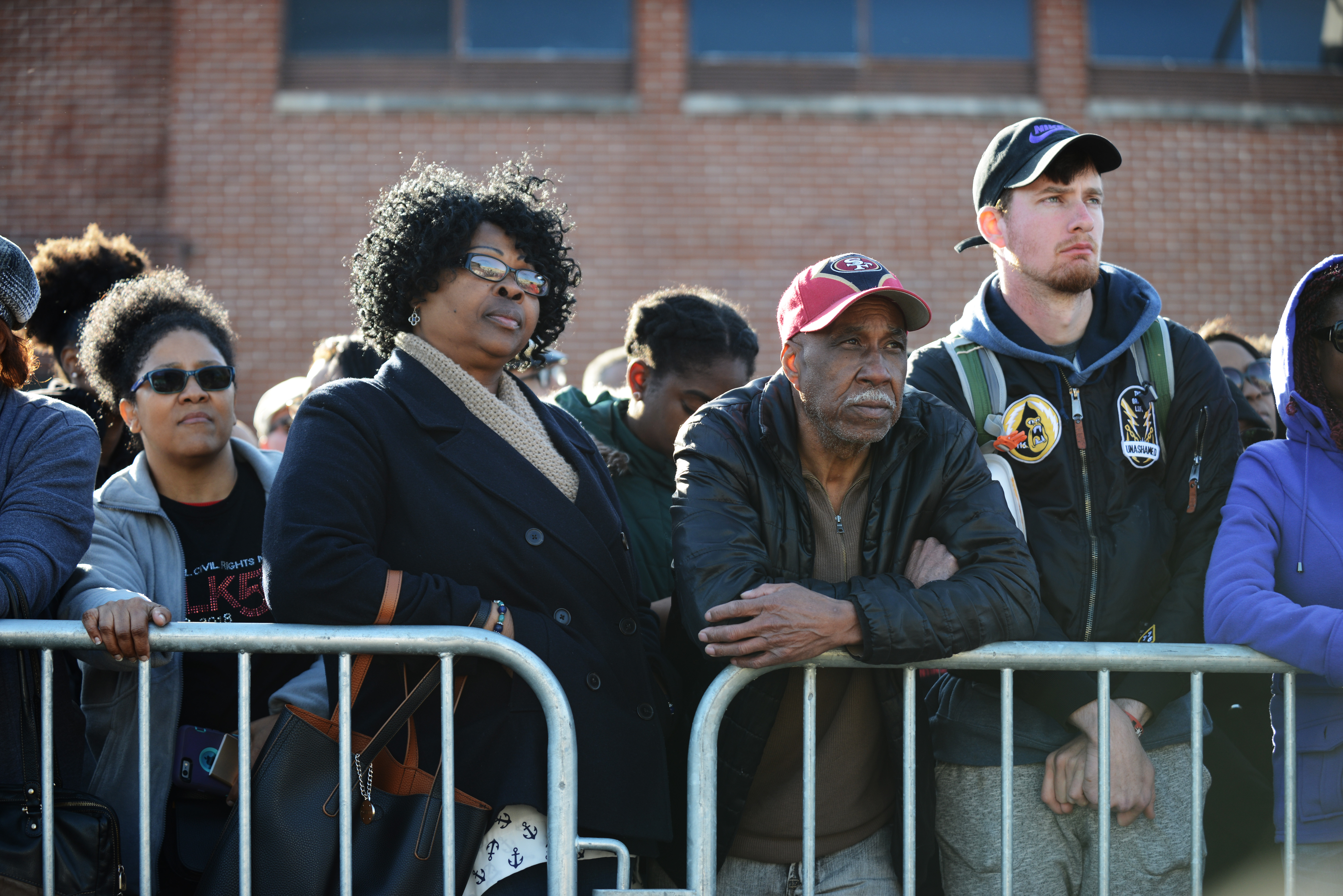 At 6:01 p.m., a bell tolled 39 times — once for each year of King’s life. Members of the audience held their phones aloft, recording the commemoration of the moment of his assassination 50 years ago. 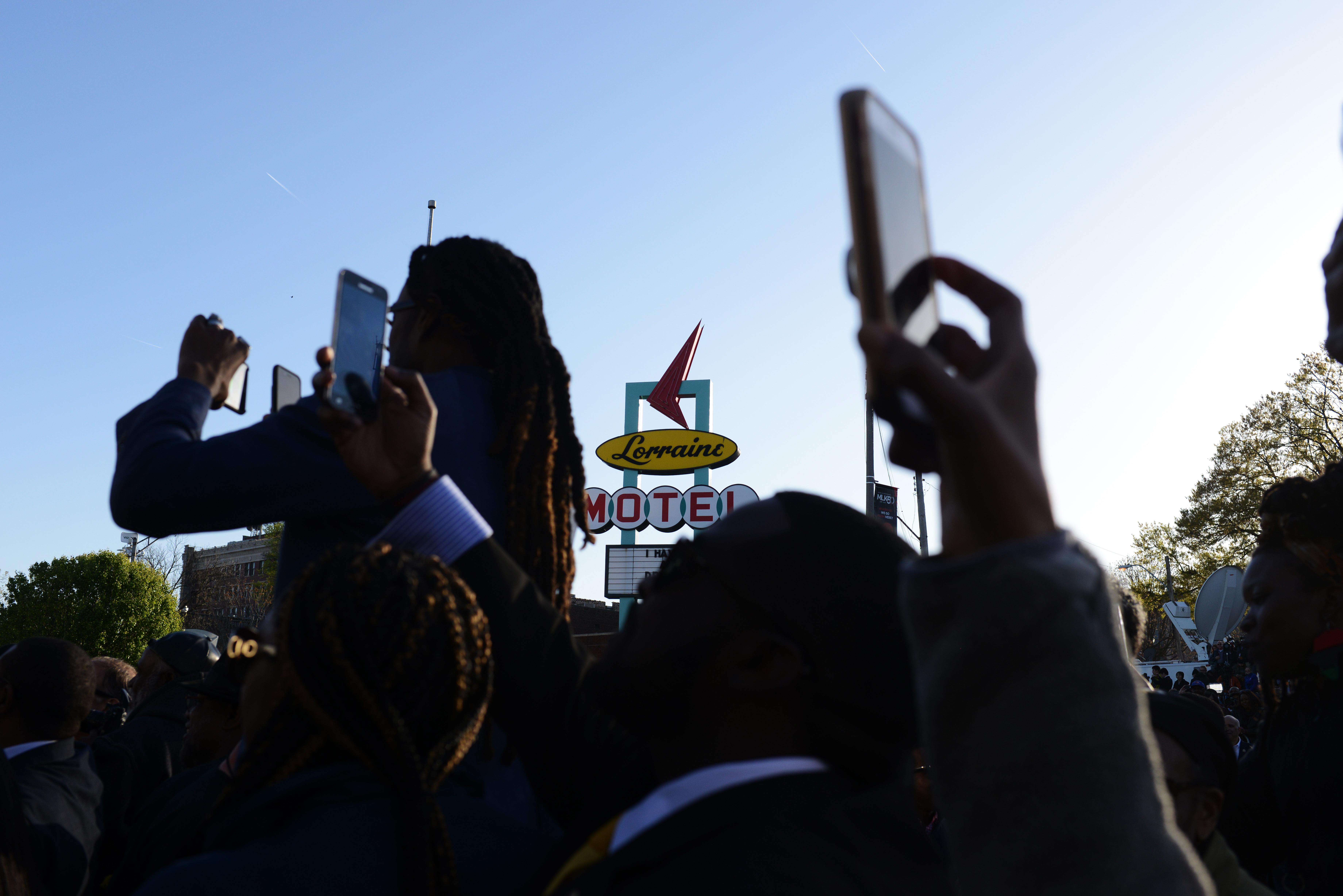