Stories about law enforcement officers disciplined for posting offensive images or words on Facebook are increasingly popping up in the news.

This story contains images that may be upsetting to some viewers.

In early July, a secret Facebook group was discovered where border patrol agents joked about the deaths of migrants and posted lewd comments about members of Congress. Three weeks later, two Louisiana police officers were fired after one of them wrote that U.S. Rep. Alexandria Ocasio-Cortez was a “vile idiot” and “needs a round.”

But in one Central Texas county just outside of Austin, the local sheriff – a lottery-winning millionaire whose department is featured on the popular A&E network show “Live PD” – has resisted calls to publicly address complaints about racist, sexist and violent images posted by a high-ranking officer in his department.

Images found on the now-deleted Facebook page of Commander Steve Deaton, who oversees the patrol division of the Williamson County Sheriff’s Department, include posts that make light of rape and murder. Some of them include photographs of scenes created with Barbies and Elf on the Shelf dolls.

One image, dated Nov. 28, 2017, depicts a black football player being dismembered at the knees by an elf with a chainsaw. An American flag is in the background. The post, apparently written by Deaton, says: “And here’s the start … Our Patriotic elf grew angrier all season. He finally snapped and decided to show the NFL how he goes about taking knees for not standing during our national anthem.”

Other posts show scenes in which the Elf dolls are alluding to sexually assaulting Barbies. 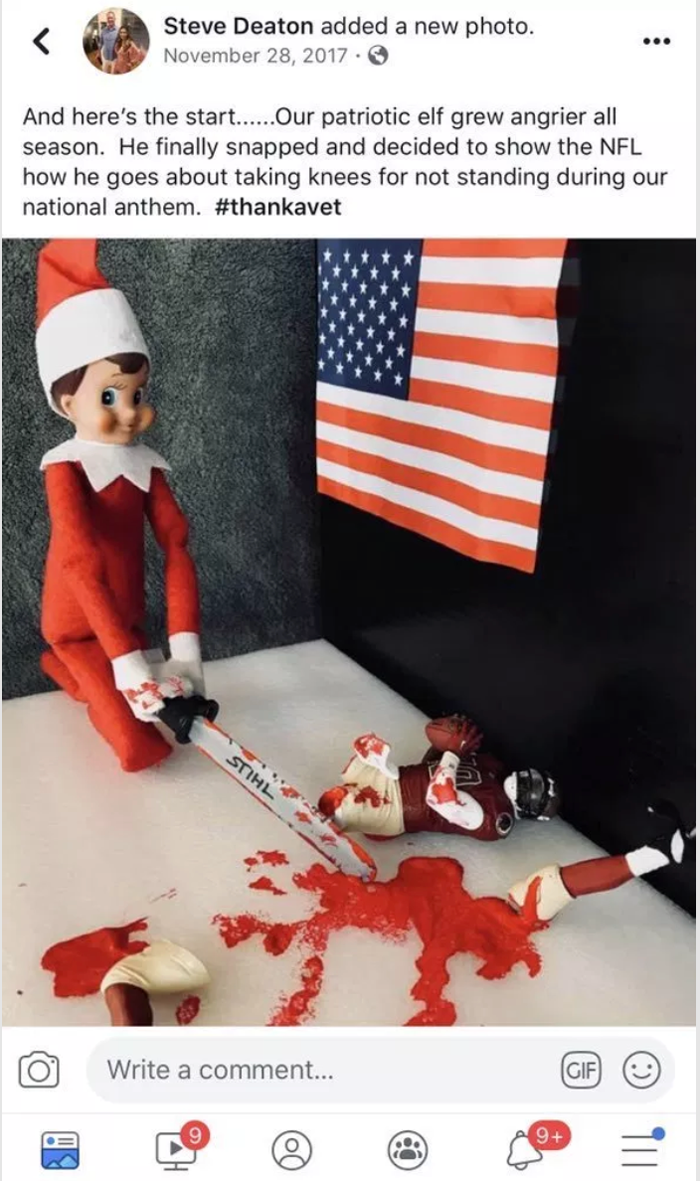 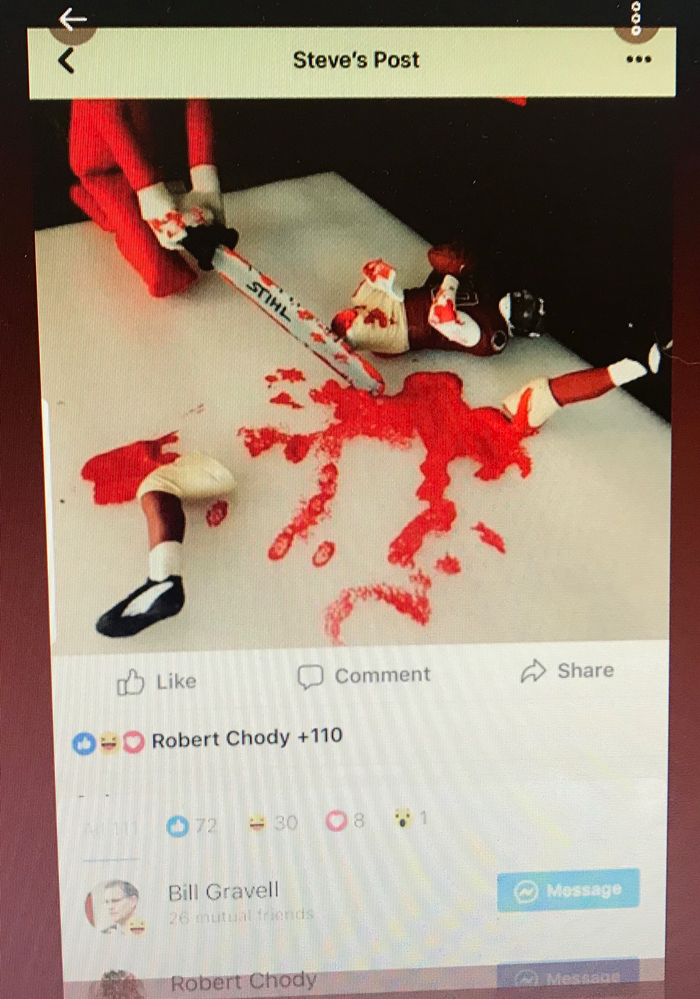 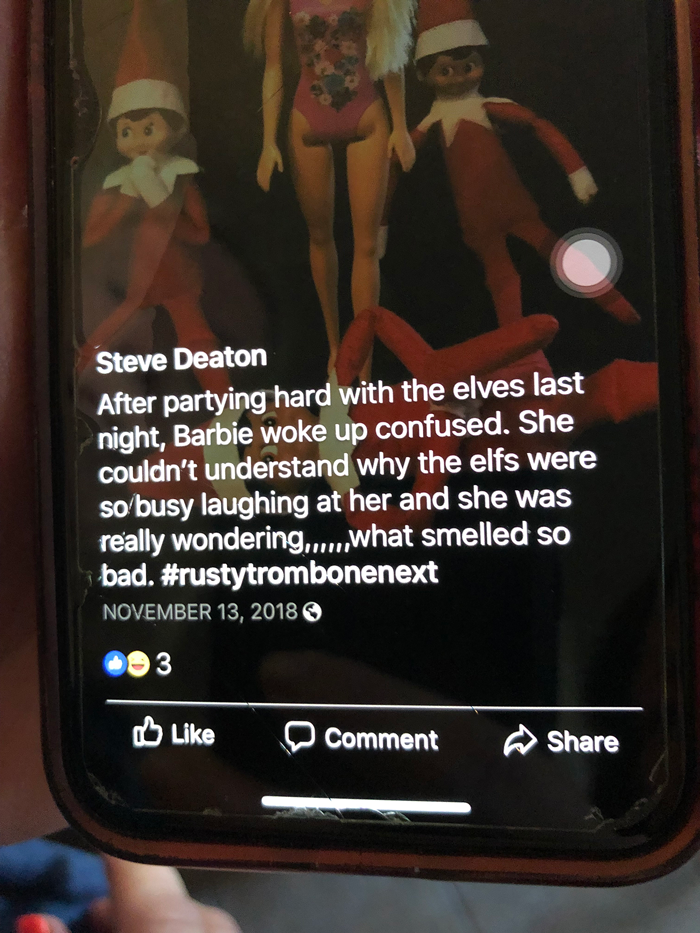 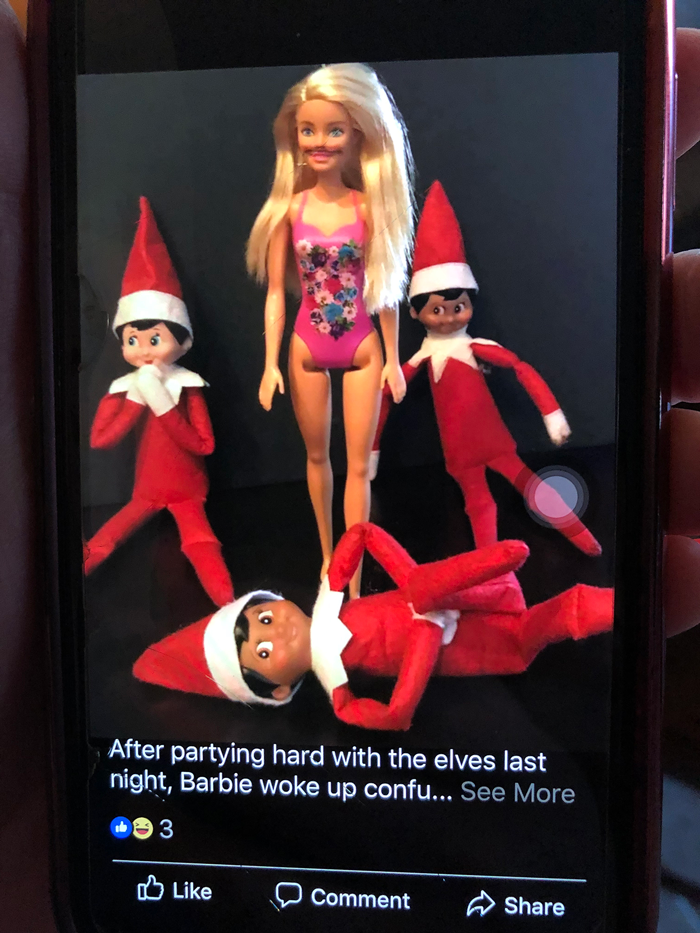 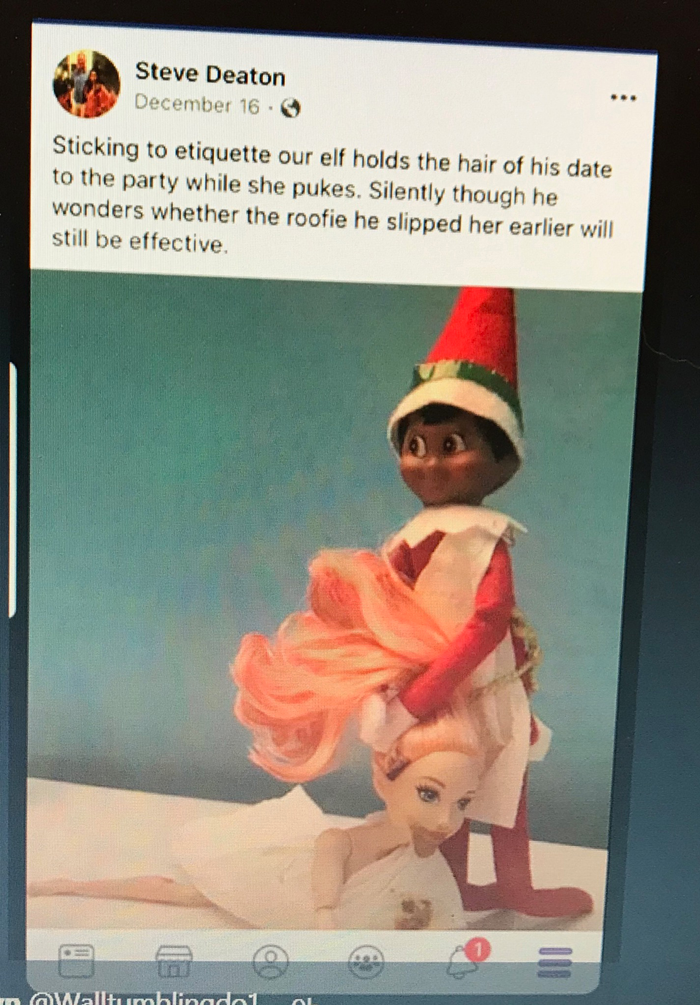 Some residents of this county just north of Austin, including some former department employees, find the images deeply disturbing, especially coming from one of the county’s top law enforcement officers. Yet, no one knows where to turn for accountability. Appeals to Sheriff Robert Chody have gone nowhere, according to messages and emails reviewed by the SPLC.

And because Chody is an elected official who hires his own employees, the county’s Commissioners Court appears to be powerless.

A woman who survived being raped on New Year’s Eve – by two male acquaintances when she was in high school 30 years ago – said she felt violated all over again when she saw the images.

During the holidays, “Sarah” (her real name is being withheld to protect her privacy) stumbled upon the images shared on Facebook by Commander Deaton. One of them depicts an elf holding the hair of a Barbie that appears to have vomit on its face. The caption reads: “Sticking to etiquette our elf holds the hair of his date to the party while she pukes. Silently though he wonders whether the roofie he slipped her earlier will still be effective.”

Earlier this year, Deaton was reprimanded for sexual harassment, though not for his Facebook posts.

According to a grievance filed by other officers, Deaton told about 20 officers during a shift briefing that it was his goal for one of them to have sex with a female producer of “Live PD,” which began airing shows featuring the department last November.

In response, Sheriff Chody ordered a “verbal reprimand” of Deaton. In an interview with a local news station in Austin, Chody said the department has “zero tolerance policy” for that type of conduct and that he was reaching out to “corporate human resources” for sensitivity training for his officers, as well as for himself.

Some residents believe the sheriff, who has garnered a large social media following, is more concerned about his fame on “Live PD” than managing his department.

“The more I saw, the murder scene, the date rape, I kept thinking to myself, this takes a lot of effort to make,” Sarah said. “He’s making outfits for them. He’s thinking these thoughts and he’s putting them down. It’s almost like he’s taking crimes against people and making a joke about it.”

In one post from November 2018, an elf is shown with a ransom note while a Barbie lies nearby wrapped in tape. The caption reads: “Our elf is searching for just the right words to convince Ted he wasn’t fooling around and to pay the ransom. While he didn’t mind burying another body, it was time to get paid.”

A screenshot of the image involving the dismemberment of a football player shows that it was “liked” by someone using Sheriff Chody’s personal Facebook account as well as that of County Judge Bill Gravell, who is the chief administrative officer of the county and presides over the Commissioners Court.

A spokesperson for the sheriff’s department said in an email to the SPLC that the department would have no comment for this story. 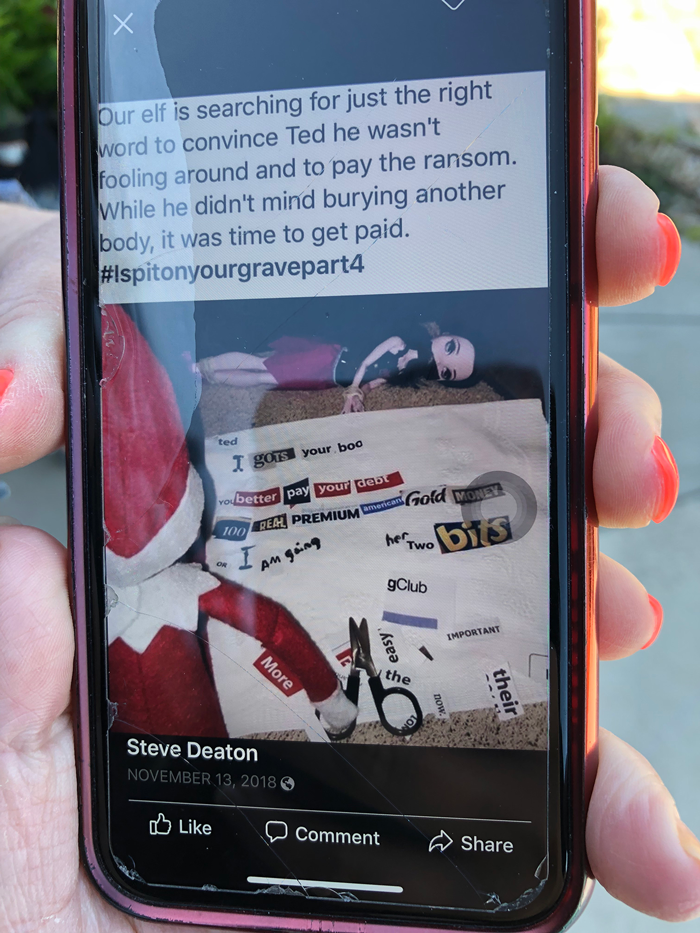 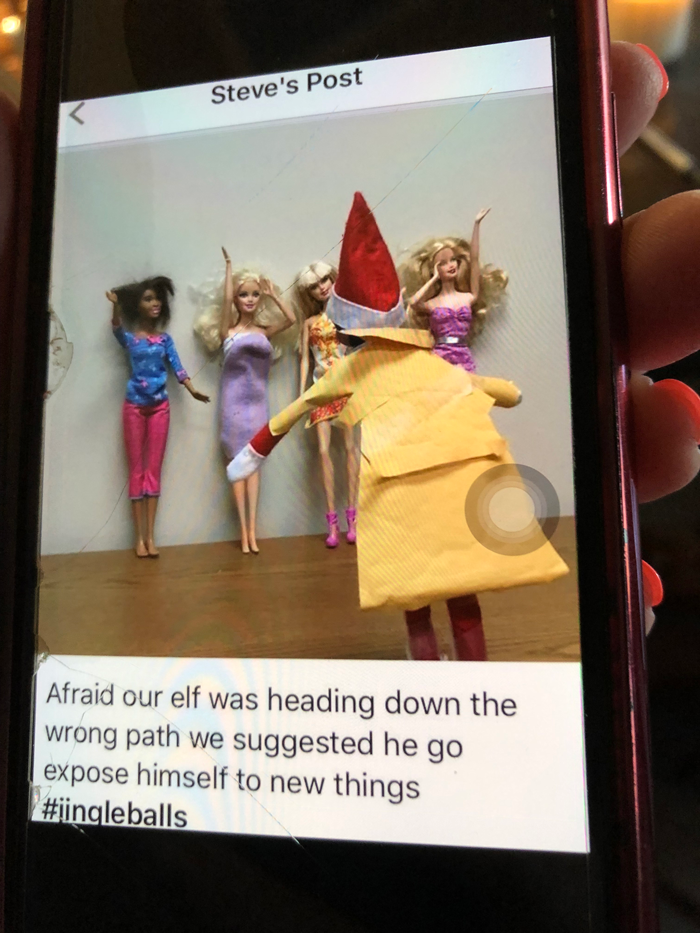 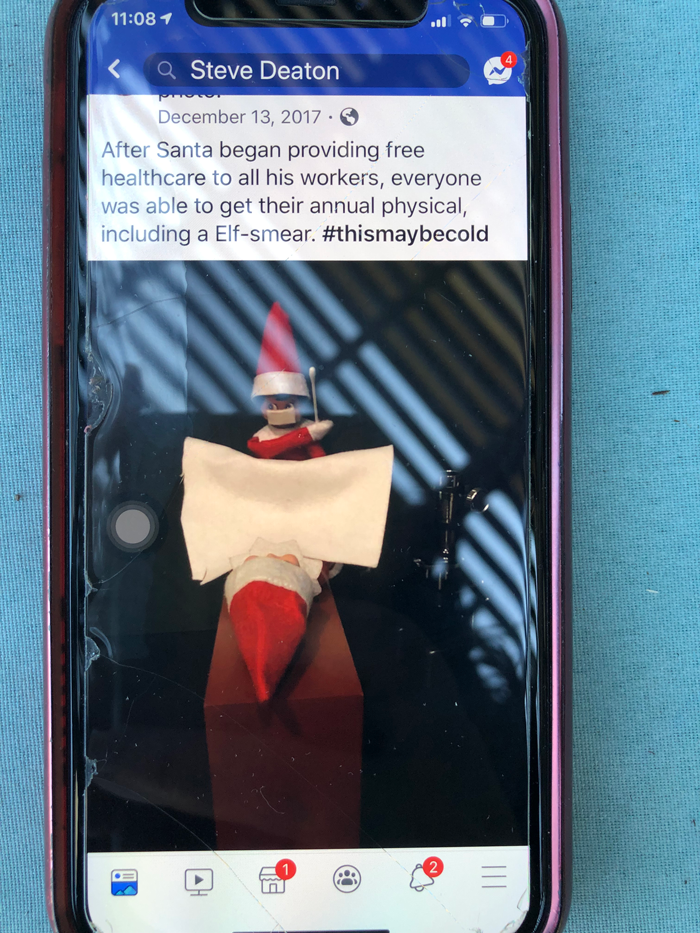 Some in the community say Chody’s engagement with Deaton’s Facebook post is concerning because of his past behavior.

In early 2001, Chody was the subject of a police brutality lawsuit while he was an officer with the Austin Police Department. The suit claimed he used excessive force against a 15-year-old black male and put him into a “full nelson” hold that caused the teen to have a seizure. According to The Austin Chronicle, the lawsuit was quietly settled roughly a month after Chody and his wife collected $51 million in lottery winnings.

For Rhonda Gilchrist, a licensed counselor who previously worked as the victims assistant director under the former sheriff, enough was enough when reports surfaced of Chody’s lax discipline of Deaton following the incident with the “Live PD” producer in April.

“I get it,” she said. “I understand cops have a macabre sense of humor. I understand that. But there’s a disturbing difference between a bad joke and going through the detailed pain of setting up some of those scenarios.”

Around the same time as the reprimand of Deaton, Chody fired two other officers for text messages on their private cell phones. Aaron Skinner, one of the deputies fired, said the private text thread was a place where K9 officers discussed what was going on in the department.

“A lot of those text messages were venting against the chain of command, and about what was going on,” Skinner told the SPLC.

A complaint affidavit regarding Skinner’s dismissal, reviewed by the SPLC, states that it was “alleged that on or before March 12, 2019, Deputy Aaron Skinner, sent electronic messages to other employees criticizing The Williams County Sheriff’s Office.” If true, the affidavit states, this would be in violation of the department’s policy regarding “Restrictions on Behavior.”

“That’s all it said on my complaint affidavit,” Skinner said. “I actually asked, where’s the message? What message are you talking about? I’ll tell you this, as far as making any racial or any type of slurs that would offend the general public, no, we didn’t direct any messages like that, like [Chody] insisted we did when he was interviewed.”

Yet even though criticizing the department falls under internal policies on “restricted behavior,” Deaton remains employed for outwardly racist and sexist comments and posts.

Messages reviewed by the SPLC show that Gilchrist contacted the sheriff through Facebook on April 17 and said she was disappointed in his decision to only reprimand Deaton. “Have you ever seen his Facebook post which was open to the public, he has a very disparaging view of women and some of his post were disturbing and offensive,” her message reads.

Chody responded that he would like to discuss the matter further but that Gilchrist “seemed to have made a decision without all the facts already” and he hoped he trusted him as her sheriff. Gilchrist continued to send images of Deaton’s posts, but Chody stopped responding.

Sarah also decided to come forward to other public officials about the images. She emailed members of the Commissioners Court on April 18 after the news about Deaton’s reprimand surfaced and asked that his Facebook posts be taken more seriously. “Deaton took painstaking measures to create Elf on a Shelf depictions of gang rape, domestic abuse, murder, kidnapping, ISIS references, drug usage and many other scenarios to demean women,” she wrote.

Only one member of the Commissioner’s Court responded. Terry Cook wrote that she was also disappointed about the sheriff’s response to Deaton’s comments regarding the “Live PD” producer. “I thought the County could dismiss this employee of the Sheriff’s dept based on our employee policy manual. But I learned on Tuesday that as a hire by an elected official, we can do nothing.” Cook added, “I’m horrified that he is in a leadership position.”

In response to an inquiry from the SPLC, Cook said in an email that, while the Commissioners Court has authority over the sheriff’s budget, under Texas law “the sheriff, as an elected official, controls who to hire and who to terminate under his ‘sphere of control.’”

One criminology expert said Deaton’s posts had the potential to undermine public trust in law enforcement.

“This is a very specific case that I’m kind of just shocked and horrified by, and that really takes a lot at this point for me,” said Erin Kearns, an assistant professor in the Department of Criminology and Criminal Justice at the University of Alabama. “Posting those sorts of things, I would imagine, would make minorities in the community less likely to trust this sheriff and make women who have been sexually assaulted more hesitant to report anything to law enforcement.”

As more scenarios regarding disparaging posts from law enforcement come to light, researchers are starting to find ways to collect and document each occurrence. The Plain View Project, established in 2017, identifies Facebook posts from current and former officers that contain offensive statements regarding race, religion and acceptability of violent policing, and collects them in a publicly accessible database.

But the Williamson County Sheriff’s Department already lives in plain view on “Live PD,” which has turned some of the department’s figures into social media stars.

Sheriff Chody, who often tweets about the department’s presence on “Live PD” and holds watch parties for the show, has amassed more than 38,000 followers on Twitter. Lt. Grayson Kennedy, one of the most frequently featured officers on the show, has more than 27,000.

“I think it does influence the public,” said Gilchrist. “I don’t think the public knows really what the dynamics are at the sheriff’s department. I think they just see what’s on the show and are like ‘yeah, look how tough they are.’ They don’t know one side of policing is to also care about your community.”

In May, following the incident with Deaton and the show’s producer, the Commissioner’s Court voted 3-2 to retain the contract with Big Fish Entertainment to continue shooting “Live PD,” despite the concerns of some commissioners about the risks and liability for the county.

Shows like “Live PD” and “Cops” have been often criticized for targeting and exploiting people of color and the poor.

In July, Williamson County commissioners heard allegations that some of Chody’s deputies used excessive force in a traffic stop and arrest in June that was featured on “Live PD.” Video from the arrest shows the man pinned to the ground, being Tasered and hit by the deputies’ fists, and saying he can’t breathe. He is also shown unresponsive and lying in a pool of blood, according to the Austin American-Statesman. The man’s lawyer told the newspaper that his client “suffered serious injuries for the sake of reality TV” and “had to see multiple medical specialists while in custody.”
In an interview about the contract renewal with “Live PD,” Sheriff Chody said, "Liability is liability no matter what, no matter whether there’s a camera present or not.”