Lindsey Vaughn walked briskly along a curvy, tree-lined street in a quiet neighborhood of modest homes.

On this warm, sunny October day in Jackson, Mississippi, a light breeze carried the scent of fresh-cut grass and the hint of meat broiling on the grill.

Vaughn gingerly approached a woman who was talking to her teenage children in her driveway. 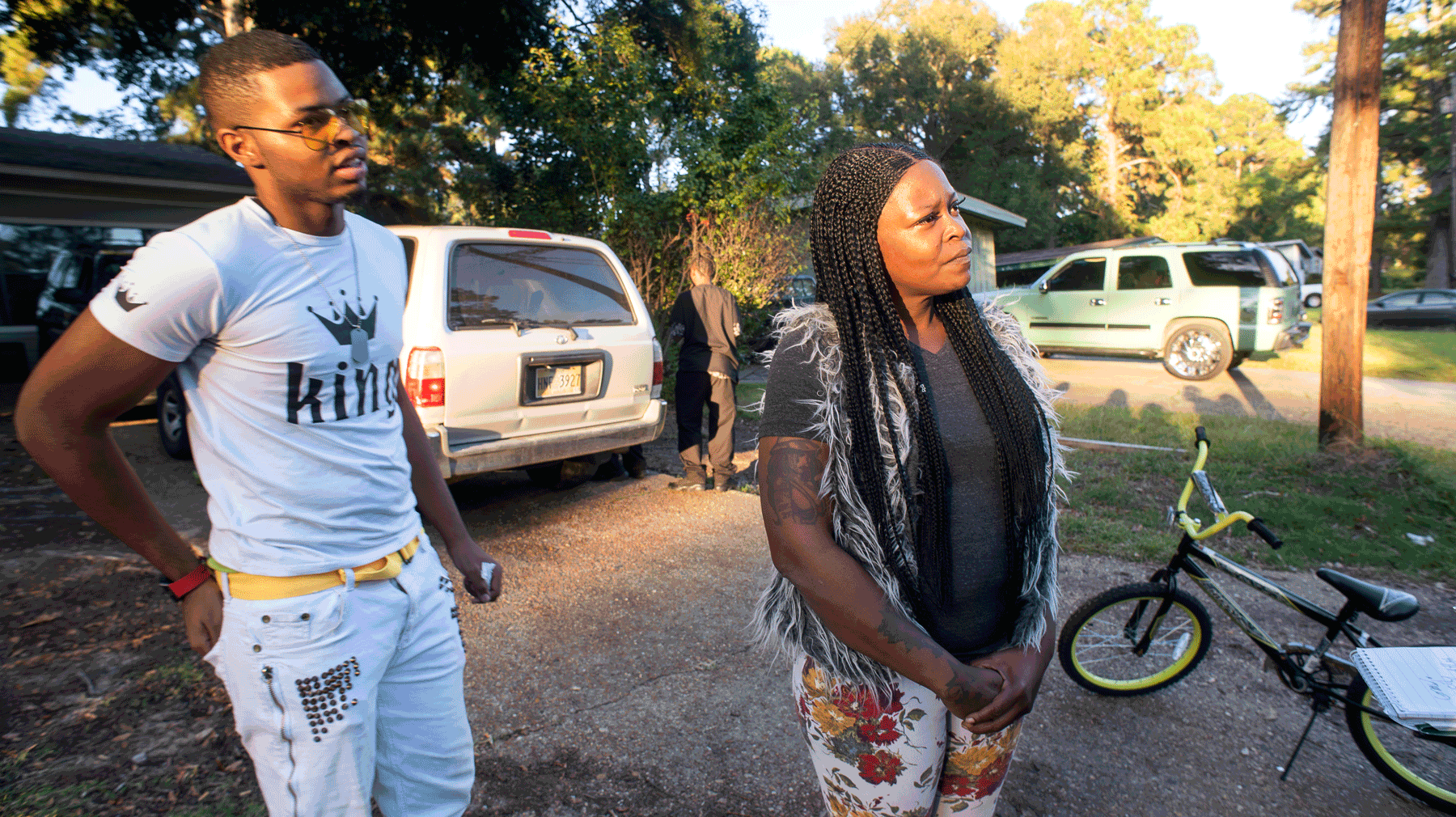 “Hello, is Chastity Hilton home?” she asked, and Hilton confirmed her identity.

“Hi, my name is Lindsey Vaughn and I’m with We Vote! Mississippi, a local grassroots organization encouraging people in our community to vote,” Vaughn said. “As you may know, there is an election being held on Tuesday, Nov. 5, for governor and many state and local offices. On a scale of 1 to 5, with 1 being, ‘I’m definitely voting’ and 5 being ‘I’m definitely not voting,’ what number best describes you?”

Hilton did not hesitate.

“I’m definitely voting,” she said. “It goes back to my grandmother and all of our ancestors. They strived so hard so that we could have the things that we do have, the opportunities that we do have, and I feel like a lot of times it’s put on the backburner, the importance of it. A lot of people feel like your vote isn’t going to count, but the opportunity that you have to make a change is given to you once or twice a year, so you should take advantage of that.”

Hilton is one of thousands of registered voters who are receiving friendly visits at their homes from We Vote! Mississippi, a non-partisan, grassroots voter engagement project focused on voter registration, mobilization and get-out-the-vote (GOTV) efforts across the state. The SPLC is investing $450,000 in the project, ahead of the 2019 statewide Mississippi elections.

“Building political power in the South takes effort, people power, dedication and resources,” said Nancy Abudu, deputy legal director for voting rights at the SPLC. “The SPLC is excited to magnify the ongoing work in communities across the state to secure the franchise for all those eligible to vote in Mississippi.”

Focused on Hinds and Washington counties, as well as on multiple historically black college and university (HBCU) campuses in the state, We Vote! Mississippi seeks to raise awareness of the stakes of next Tuesday’s statewide elections for historically marginalized communities, communities of color and new voters.

Building on the SPLC’s successful We Vote! Jackson project during the 2018 U.S. Senate special election, We Vote! Mississippi began with voter registration drives in Hinds County and on multiple HBCU campuses across the state. The first phase of the project, which began on Sept. 19, continued until the Oct. 7 registration deadline.

Now in its second phase, the campaign has shifted into a door-to-door canvass, voter mobilization and get-out-the-vote operation. The goal, already surpassed, was to directly interact with 35,000 households.

‘What’s holding you back from voting?’

Mike Vestal, one of several people who canvasses voters each day for the project, spent a recent afternoon knocking on doors along the same streets that Vaughn was canvassing. Like the other canvassers, he used an app on his iPhone called miniVAN, which allowed him to track the doors he needed to knock on. 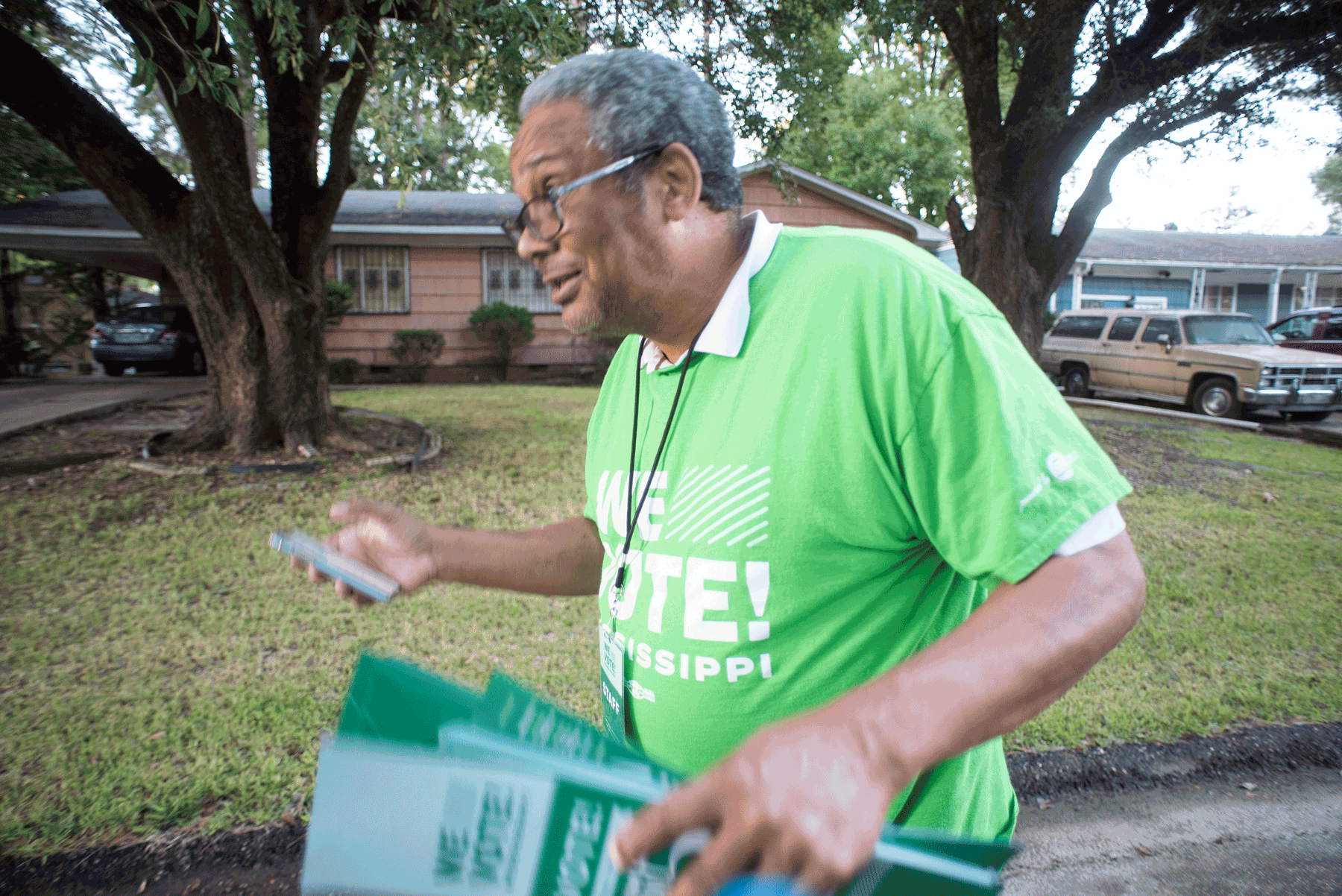 I can remember the time before the 1964 Civil Rights Act was passed. I know what it is to have ‘separate but equal facilities’ and I know how it changed after the Voting Rights Act passed by Lyndon Baines Johnson started to give us our rights to be full participating citizens in this country.”

Dressed like the other canvassers in a neon green T-shirt with “We Vote! Mississippi” inscribed on the front and “Vote! Tuesday, Nov. 5” on the back, Vestal is a commanding presence at 6-foot-2.

He walked up the driveway of a one-story, forest-green house, where Kelvin Hubbs was sitting on the front porch in a chair.

Vestal explained to Hubbs that there was an election coming up. There was a race for governor as well as for many local and state offices, he said. Then he asked Hubbs if he intended to vote.

Hubbs said he had only voted once in his life and wasn’t interested.

“May I ask you a question?” Vestal said. “What’s holding you back from voting?”

Hubbs said he didn’t trust the political process because elected officials make a lot of decisions behind closed doors.

“I understand how you feel,” Vestal said. “But let me say when you vote, you make our elected leaders focus on issues we care about, you know like school funding, youth opportunities, health care, whether or not our trash gets picked up, whether or not our roads are paved. It’s really important especially for underserved neighborhoods. So I was wondering based on our conversation, do you think you would change how you feel and vote this election?”

Hubbs, holding firm to his decision, said, “Not in this lifetime.”

Most voters that day, like most days, however, told Vestal they intended to cast a ballot.

Before quickly moving on to the next house on the app, Vestal told Rankin, “Please tell your family and your friends it’s important for them to vote.”

‘I had lost hope’

Voting is precious for Ebonisha Sexton, a We Vote! Mississippi canvasser who drove the van carrying her colleagues to the neighborhoods where they knocked on doors.

Now 36, she has been voting for half her life – since she was 18. She cannot imagine anyone willfully giving up their right to cast a ballot. But she feels like she has already lost it. 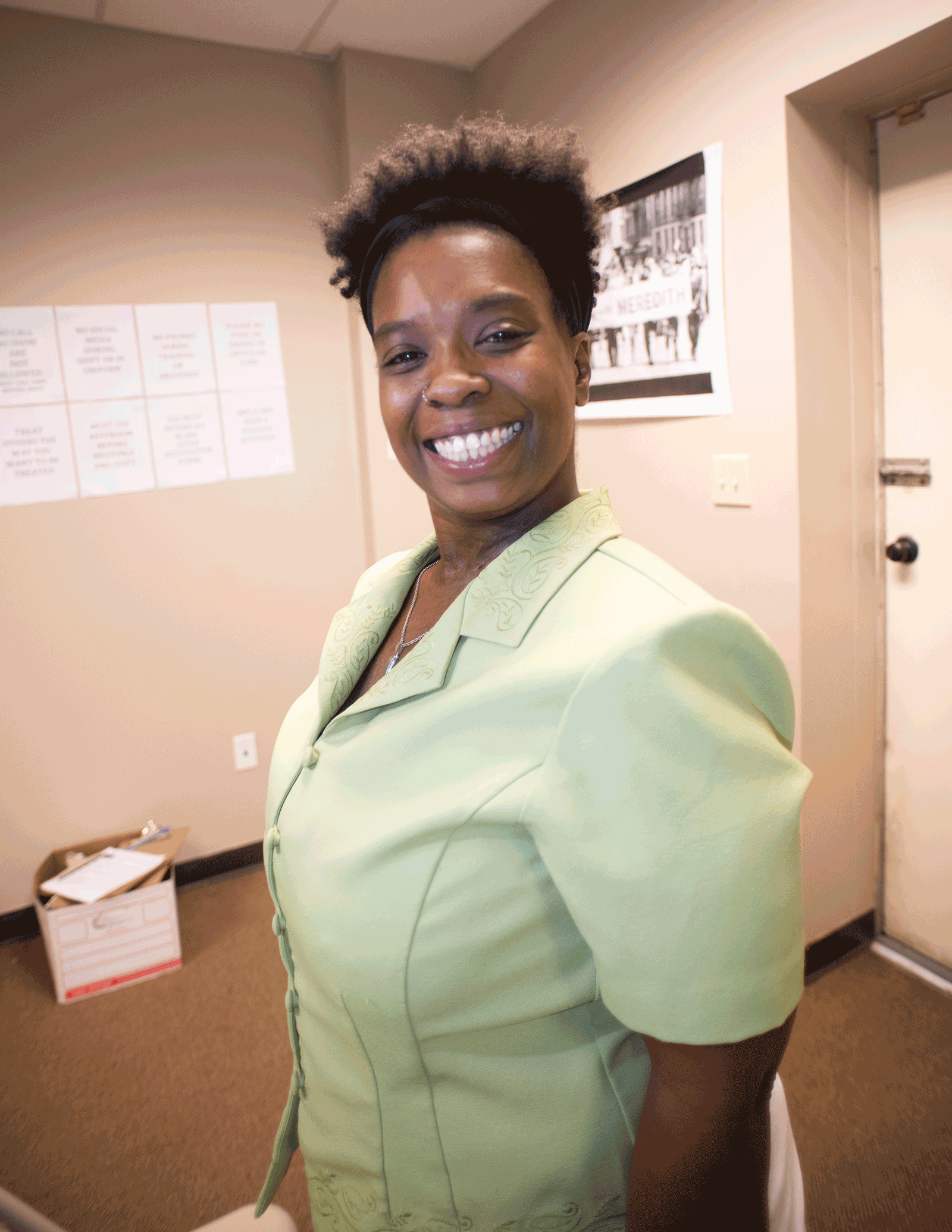 Ebonisha Sexton, a We Vote! Mississippi canvasser, in the Jackson office

In 2017, when her father passed away, she temporarily left her Mississippi home and traveled to Michigan, where she spent time mourning with her sisters. Three months later, she returned home, unaware of any changes to her voter registration status.

In 2018, when she went to vote in the congressional election, a poll worker informed that her name was not on the list – even though she had voted in many previous elections and never changed her address. She was told that she would have to cast a provisional ballot.

She still doesn’t understand what happened to her registration. And she worries that her provisional ballot did not count. It’s too late for her to register for the Nov. 5 election, she said, but she plans to ensure that her name is on the voter rolls in 2020.

“I had lost hope in our system,” Sexton said, her eyes tearing up with emotion. “I see it a lot with people my age. We forget or we don’t know the struggles that people have had to overcome. We learn about it but neglect to understand what they’ve really been through, and we take it for granted. It’s important for me to show a great example for my kids and pass on a legacy that was left. We actually have a voice. It’s real, and don’t listen to what people say about our vote doesn’t count and doesn’t matter, because it does.”

Lily Victory was not having as much luck as Vestal that day. She took one side of the street as he took the other. She came across one young man who opened the door and said his mother “forced” him to register. But after he did, he began to research the candidates and got interested in the political process. 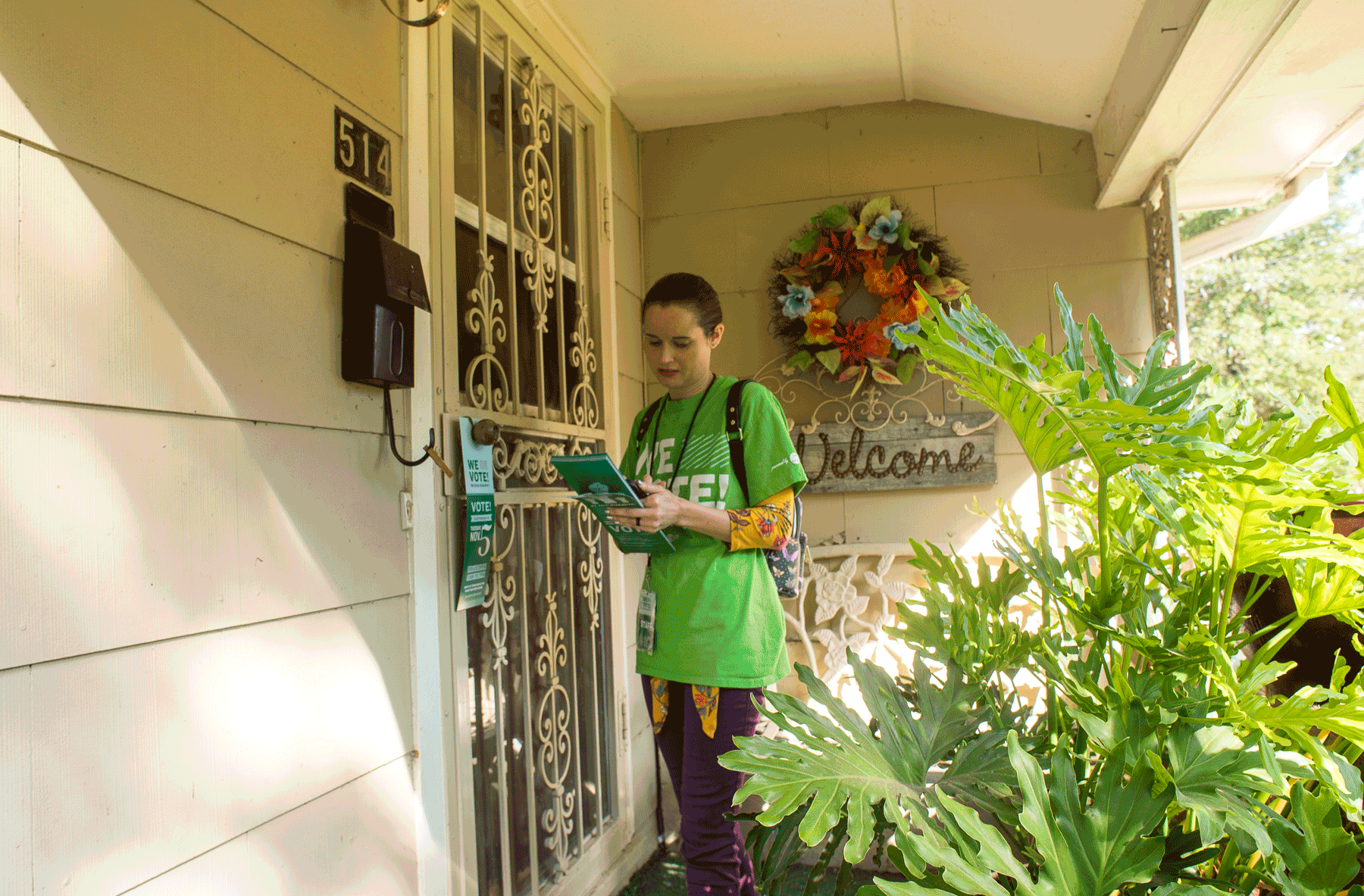 Many older voters may be interested in the political process, too, Victory said, but they face hurdles.

“We have a lot of transportation issues,” she said. “Poverty is a major issue here, and so many things stem from that. Whole families share one car. And people have to get to work. The polls are really not a priority. Fortunately, there’s usually one older person I meet in every neighborhood that does their best to gather everybody up and take them. But we can’t just rely on that one person to do all that for everyone in the neighborhood.”

Victory has driven voters to the polls herself in previous elections, sometimes offering fast food as an enticement to younger people who might not otherwise cast a ballot.

Poverty is among several issues that canvassers hear from voters. Poor water quality, the lack of good educational opportunities and the poor conditions of streets are among the chief complaints. 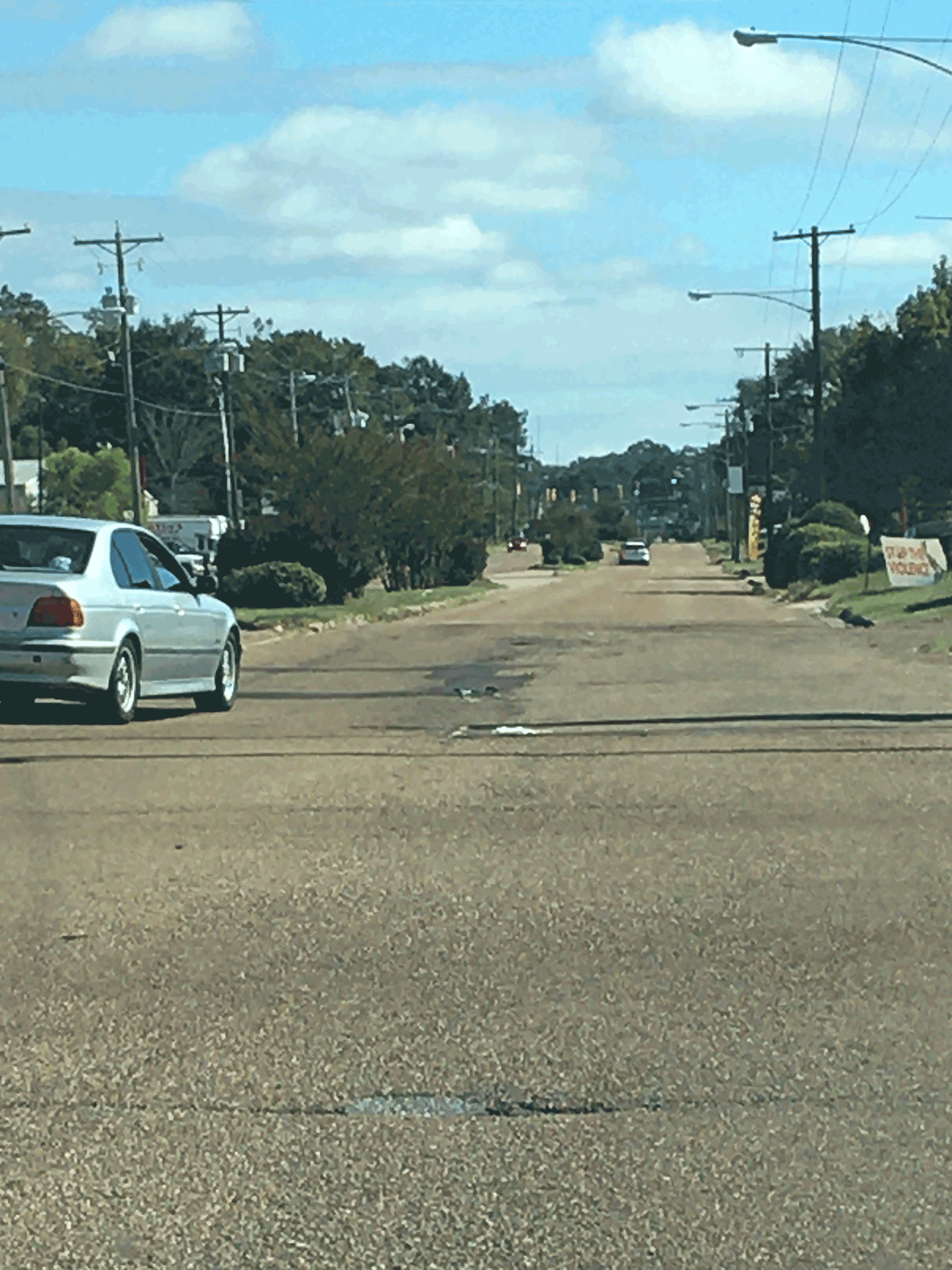 Streets in some of Jackson’s black neighborhoods are clearly in a state of neglect.

On Medgar Evers Boulevard near the intersection of Martin Luther King Jr. Drive – not far from the house where Evers, an NAACP field secretary for Mississippi, was murdered by Klansmen in 1963 – the street is so cracked and full of potholes that motorists must slow down to avoid damaging their car tires and suspensions.

But Vaughn – who like most of the voters she canvasses is African-American – pushes back against the notion that voting will not make a difference.

“By not voting, we’re indirectly voting against ourselves and our community,” she tells them.

Curtis Johnson needed no convincing when Vestal approached him. 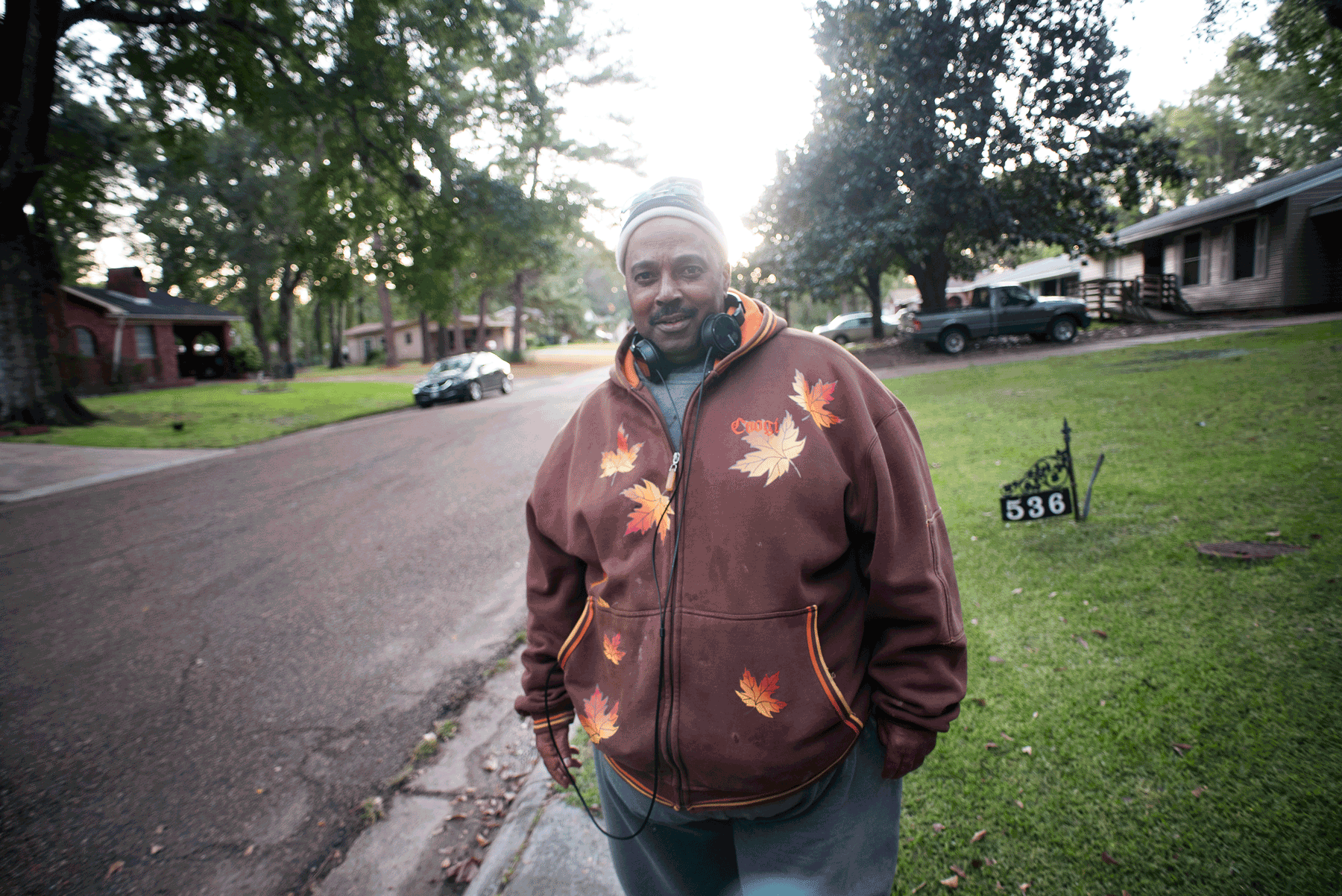 “My parents and grandparents instilled in me to vote in honor of all these people who have died [for voting rights],” Johnson said. “People tried to deny our race of people that privilege. You can’t complain about circumstances if you don’t get out and try to make a change. … So I encourage all, especially our teenagers, to get registered. And not only get registered but to come out and vote on Nov. 5.”