Jonathan sleeps under a bridge at night or on a friend’s porch. During the day, he holds up a “homeless” sign in the grassy area near a highway exit and asks for money.

Some motorists are kind and give him money. Others are cruel. They accuse him of pretending to be homeless, tell him to get a job or threaten to call police.

Jonathan – who suffers from pancreatitis, uncontrolled diabetes and kidney failure, making it extremely difficult for him to find a job and thus to afford housing – was in his usual spot recently, holding up a sign that read: “HOMELESS. Today it is me, tomorrow it could be you.”

Minutes later, a police officer arrived and asked him to rip up the sign. He gave Jonathan a ticket for panhandling and – before leaving – told him that the city of Montgomery, Alabama, had passed a new law that would give him a mandatory two days in jail if he did it again.

“When officers approach me, the feelings that I have are indescribable,” Jonathan said. “I feel lonely, scared, and anxious, wondering what may happen to me.”

Jonathan’s story illustrates the impact that the city’s yet-to-be-enforced panhandling ordinance is having on Montgomery’s homeless population.

This week, in a victory for the SPLC and other homeless advocates, Montgomery city council members rejected an amendment to the ordinance that would have made it a crime for people to give anything to a pedestrian through a car window on a public road.

But the original ordinance, which the council approved in July, remains in place. It requires a mandatory two-day jail stay for anyone who panhandles. The city agreed to delay enforcement for at least 60 days, but that period has now passed without indication of whether or when the city might enforce the ordinance.

In July, the SPLC urged the mayor to veto the original ordinance and threatened to sue the city. The SPLC also launched a campaign in collaboration with the Montgomery faith community and homeless advocates to organize opposition to the original ordinance and amendment. The vote on Tuesday followed a press conference the SPLC held with homeless advocates and members of the clergy. The advocacy included another letter from the SPLC, along with its partners at the ACLU Foundation of Alabama Inc. and the National Law Center on Homelessness & Poverty, again threatening to sue the city if it did not vote down the amendment and rescind the original ordinance.

“Montgomery’s panhandling ordinance unfairly punishes people who are living in poverty and violates their First Amendment right to free speech,” said Ellen Degnan, an SPLC law fellow who spoke at the press conference. “It dehumanizes, ostracizes and incarcerates people for expressing need. It panders to ignorant stereotypes about people who should instead command our respect – people courageous enough to ask for help, despite facing daily disapproval and harassment from passersby and police. It criminalizes expressions of mutual aid and compassion – one person’s decision to give to another.”

City leaders have said the law addresses public safety issues, but the state already has laws in place to address the concerns about traffic and safety that are cited in the ordinance, so there is no need for the law, Degnan said.

Tuesday’s meeting became emotional at times. At least 30 people stood when asked to show who opposed the ordinance.

The Rev. Edward Nettles said at the meeting that many people are just one decision away from living on the streets. “Panhandling may be an eyesore to the city, but it’s survival to those who are on the streets. There are veterans. There are people out there at no fault of their own.”

Across the country, rising housing costs, stagnant wages and inadequate social service infrastructures contribute to a crisis of homelessness. Alabama is no exception. An estimated 3,500 residents of the state experience homelessness on any given day, and many of them live in Montgomery.

Local service providers have counted 574 people living in the city’s homeless shelters, in abandoned housing, in tents and on the streets. But the true number was closer to 800, they said. In 2017, that estimate grew to 900.

Pastor Shane Isner, one of several members of the clergy who vocally spoke against the ordinance at the SPLC’s press conference, said later that if the amendment against handing items to people who panhandle had passed, he and some of his church members planned to violate the ban and get arrested for it. 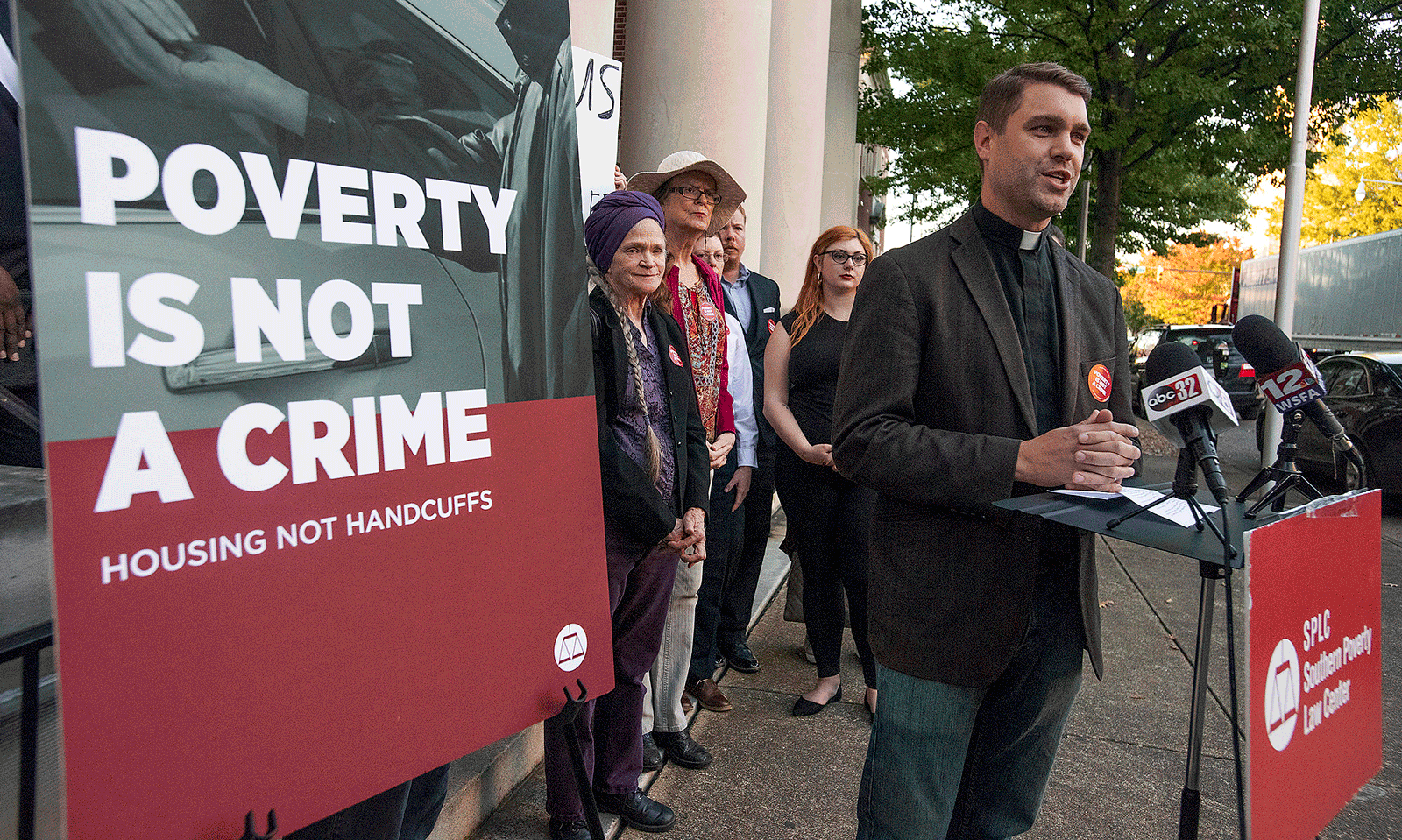 “Have you ever heard a career counselor in school ask if you want to become a panhandler?” asked Isner, who is senior minister at First Christian Church in Montgomery. “Of course not. It’s not a career choice; it’s a survival technique. Making survival a criminal offense is utterly unjust. Imposing fines on people without means to support themselves isn’t just unfair, it’s cruel and shameful.”

Thousands of U.S. cities restrict panhandling in some way, but – based on a growing string of court decisions, laws that outlaw panhandling are themselves illegal, according to Joseph W. Mead, an assistant professor of law and urban studies at Cleveland State University.

“Restrictions on panhandling are routinely struck down under the First Amendment,” Mead said. “People have a constitutional right to ask for help, and laws that exclude people from exercising their right to free speech from large parts of a city have been repeatedly struck down. In fact, similar restrictions have been struck down in Portland, Maine; Albuquerque, New Mexico; and other places.”

In light of rulings that have found that such restrictions violate the freedom of speech, Cleveland, Dallas, Denver and dozens of other cities have repealed laws restricting panhandling in public places since 2015, Mead wrote on The Conversation, a not-for-profit media outlet that uses content sourced from academics and researchers.

Mead told the SPLC that he is skeptical about Montgomery city council members’ assertion that they are trying to address a safety issue.

‘To help rather than to harm and punish’

Rabbi Scott Looper of Temple Beth Or in Montgomery, who wrote an op-ed co-signed by nine other clergy members in The Montgomery Advertiser opposing the ordinance on moral grounds, said he is relieved that the city council voted down the amendment that would have punished people who give to people who panhandle.

“They clearly listened and reached, I believe, a correct conclusion,” he said.

But, he said, “Our aversion to seeing things which strike us as unpleasant, to me, is ridiculous. If we are bothered by the sight of people in need, we should not arrest them and hide them, or transport them out of the city. Montgomery is on the cusp of establishing a new identity for itself, a new name. Will we remain a city that over centuries has oppressed populations while advantaging others? There seems to exist a fear that if we help the homeless and poor, then their numbers will grow. I would like to be a resident of a city that establishes avenues to help rather than to harm and punish.”

Isner echoed Looper’s concerns, saying the city should invest in more subsidized housing, support services for people in poverty, addiction and recovery programs, as well as mental health counseling and other services.

“Those would be more systemic solutions that would reduce the percentage of people in need, and that ought to be our ultimate goal,” Isner said.

Ensuring access to housing, health care and nutrition – instead of punishing people when they ask for help – should be a priority for city leaders across the nation, advocates say, but it won’t be until the public encourages officials to do so.

“People should be unhappy with visible poverty in their cities,” Mead said. “But the solution isn't to make the poverty less visible, it is to address the underlying causes of poverty.”