Kinsey Akers had to take the PSAT but was determined to make her voice heard at a public meeting on school safety that same day.

A junior at Harrison School for the Arts in Lakeland, Florida, Akers took the standardized test, checked out of school early and missed two classes so she could rush home and get ready to speak to the Marjory Stoneman Douglas High School Public Safety Commission.

The commission formed after the February 2018 school massacre in Parkland, Florida, to make recommendations – with public input – to the Florida Legislature about making schools in the state safer. Akers is a member of March for Our Lives, a national, student-driven movement that came together after the Parkland shooting to advocate for gun reform and other measures to improve school safety. 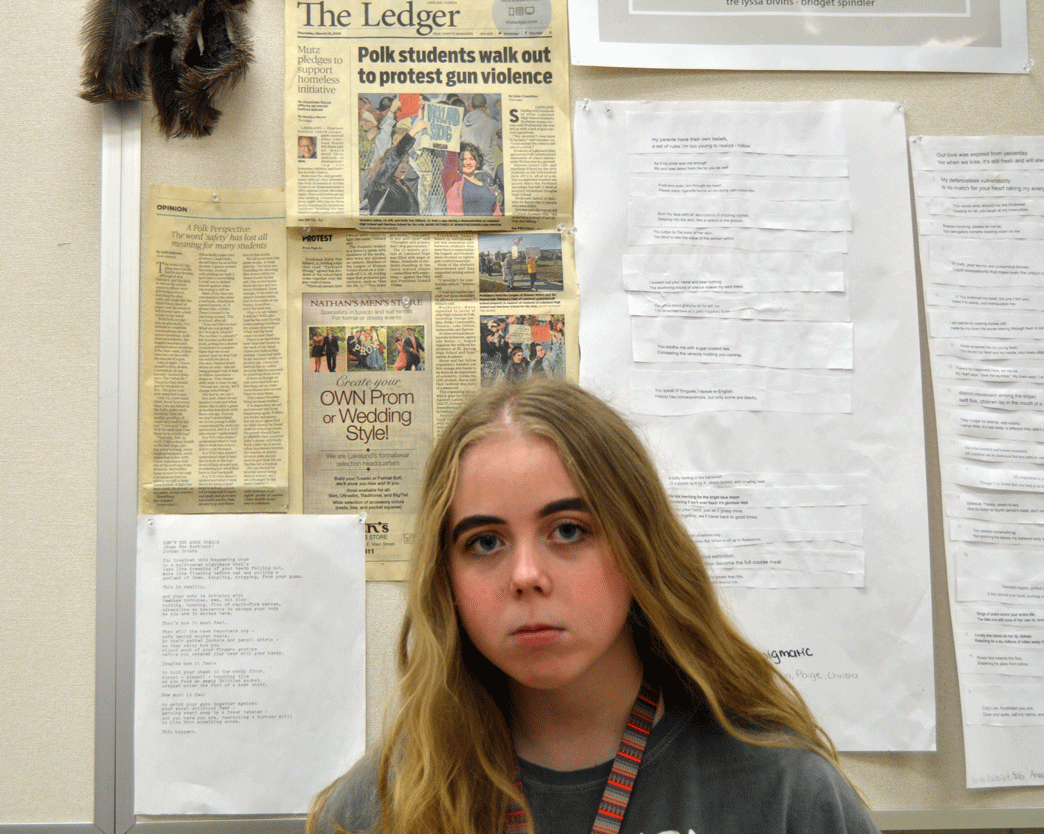 After getting dressed, Akers picked up her cell phone and began typing a message to her mother to let her know she was leaving for the meeting. But then she received a text from a March for Our Lives colleague, telling her that the commission had pushed up the public comments and closed the meeting early.

“At first, I was in shock,” said Akers, 17. “I didn’t think they were allowed to do that. That shock soon turned to anger and a demand for the commission to be held responsible. I could not believe the commission would go to such a measure to silence the people they claim to be protecting. But I will not be silent.”

On behalf of Akers and other young plaintiffs who were denied the right to speak at the Oct. 16 meeting, the SPLC recently filed a lawsuit against the commission for violating Florida’s open meetings laws.

Many of the plaintiffs, including current high school students like Akers, were preparing to leave for or were en route to the meeting in Orlando when they were informed at about 2 p.m. that the commission had decided to take public comment early – instead of the published time of 4:45 p.m. – and had ended the meeting. Some students who were already traveling arrived to find an empty room.

The abrupt change effectively denied the youth advocates their right to publicly address the commission, the lawsuit states.

‘Little regard for the law’

“The MSD Commission violated the law when it refused to honor its own published agenda and denied these young advocates an opportunity to be heard during a critical meeting,” said Bacardi Jackson, managing attorney for the SPLC. “We raised these concerns both in person and in a letter to Commission Chair Sheriff Bob Gualtieri, but were ignored. The commission has shown little regard for the law and the communities it is charged with protecting. We are suing to ensure our clients’ voices are heard.”

The lawsuit states that the commission’s actions are part of a continuing pattern of ignoring the voices of the individuals most affected by their recommendations. A recent report by the SPLC describes how a majority of the commission’s members have law enforcement backgrounds and virtually no experience in public education, school administration, youth development or mental health. Its voting members appear to be all white and do not include students or current educators.

The plaintiffs – March for Our Lives Florida, the Florida Student Power Network, Dream Defenders and individual young people who wanted to speak at the commission meeting – are seeking a court order requiring the commission to comply with Florida’s open meetings laws.

They also ask the court to issue a ruling that would prevent the commission from making further recommendations to the Florida Legislature without providing the youth advocates an opportunity to make the comments they intended to make at the October meeting.

The meeting took place at the Omni Orlando Resort at ChampionsGate, a secluded luxury golf resort destination in a suburb that is inaccessible by public transportation and has an advertised daily parking rate of $18 to $32.

The location and parking fee made it challenging for people without cars, money to pay for parking, or access to a ride. The hearing also took place during a school day when the PSAT and SAT were being administered.

All these actions had the effect of excluding the plaintiffs – mostly young people who attend school – from making their voices heard before the commission.

Florida’s open meetings laws require that state commission meetings be open to the public and held in locations that do not exclude people based on their economic status. The laws also require commissions to give members of the public proper notice of meetings and a reasonable opportunity to be heard at them.

If given the opportunity to address the commission publicly, the student groups would explain how certain recommendations by the safety commission have led to school policies that put marginalized students at risk and make schools less safe.

Evidence-free school disciplinary policies – coupled with over-policing and over-surveillance of Florida schools – have created an environment where students, especially those from immigrant families, feel unsafe. What’s more, these policies will likely contribute not only to the school-to-prison pipeline, but also to the school-to-deportation pipeline.

“I don’t agree with many of the Marjory Stoneman Douglas Public Safety Commission’s policies and decisions,” Akers said. “Their blatant disregard for evidence-based solutions to gun violence in schools raises concerns about their intentions as an organization.

“They have supported dangerous policies such as arming teachers and increasing police presence in schools – neither of which are supported by research,” she said. “On the contrary, evidence shows that more guns lead to more deaths. We need voices on the commission who can speak to these issues.”