This list of 940 active hate groups is based on information gathered by the SPLC’s Intelligence Project from hate group publications, citizen reports, law enforcement agencies, field sources, web postings and news reports. Only organizations known to be active in 2019, whether that activity included marches, rallies, speeches, meetings, flyering, publishing literature or criminal acts, among other activities, were counted in this list. Entities that appear to exist only in cyberspace are not included because they are likely to be web publishers falsely portraying themselves as powerful, organized groups. This list also does not document activism that takes place only online by individuals or groups, whether on Facebook, VK or similar online forums. Major online web forums have in recent years seen their comment sections and registered users grow, but such activity does not occur in real life and thus is not reflected in this count. If the group has a known headquarters, the city appears first in the listing of the group’s chapters and, if there are multiple chapters of the group, is marked with an asterisk.

Groups are categorized as Ku Klux Klan, Neo-Nazi, White Nationalist, Racist Skinhead, Christian Identity, Neo-Confederate, Black Separatist, Anti-LGBTQ, Anti-Muslim, Anti-Immigrant and General Hate. Because skinheads are migratory and often not affiliated with groups, this listing understates their numbers. Christian Identity describes a religion that is fundamentally racist and antisemitic. Black Separatist groups are organizations whose ideologies include tenets of racially based hatred. Neo-Confederate groups seek to revive many of the racist principles of the antebellum South. 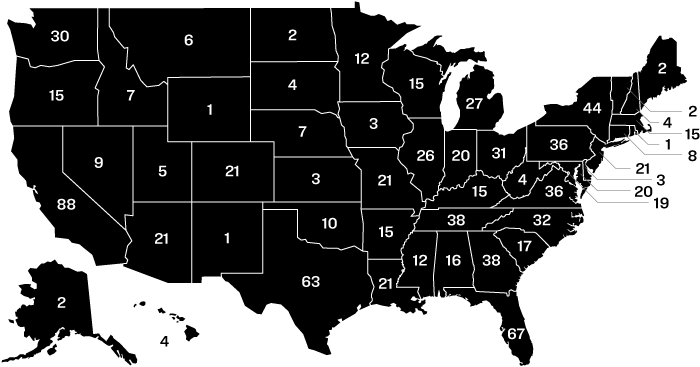 Anti-Muslim groups exhibit extreme hostility toward Muslims and attribute to Islam’s followers an inherent set of negative traits. Anti-LGBTQ groups engage in crude name-calling and disseminate disparaging propaganda and falsehoods about this population. General Hate groups espouse various ideologies of hatred and include the
sub-categories of Hate Music labels, Holocaust Denial groups, Radical Traditional Catholic groups (which reject core Catholic teachings and espouse antisemitism), and Other (a variety of groups endorsing a hodgepodge of hate doctrines).

What is a hate group?

A hate group is an organization that—based on its official statements or principles, the statements of its leaders, or its activities—has beliefs or practices that attack or malign an entire class of people, typically for their immutable characteristics. We do not list individuals as hate groups, only organizations. The organizations on the SPLC list vilify others because of their race, religion, ethnicity, sexual orientation or gender identity—prejudices that strike at the heart of our democratic values and fracture society along its most fragile fault lines. The FBI uses similar criteria in its definition of a hate crime: [A] criminal offense against a person or property motivated in whole or in part by an offender’s bias against a race, religion, disability, sexual orientation, ethnicity, gender, or gender identity.

A “group” is an entity that has a process through which followers identify themselves as being part of the group, such as donating, paying membership dues or participating in activities like meetings and rallies. Individual chapters of a larger organization are each counted separately, because the number indicates reach and organizing activity.

What is the SPLC’s hate group map?

Each year since 1990, the SPLC has published an annual census of hate groups in the United States. The number is a barometer, albeit only one, of the level of hate activity in the country. The hate map, which depicts the groups’ approximate locations, is the result of yearlong monitoring by analysts and researchers. It represents activity by hate groups during the previous year. Tracking hate group activity and membership is extremely difficult. Some groups do everything they can to obscure their activities, while others grossly over-represent their operations. The SPLC uses a variety of methodologies to determine the activities of groups and individuals. These include reviewing hate group publications and reports by citizens, law enforcement, field sources and the news media, and conducting our own investigations. 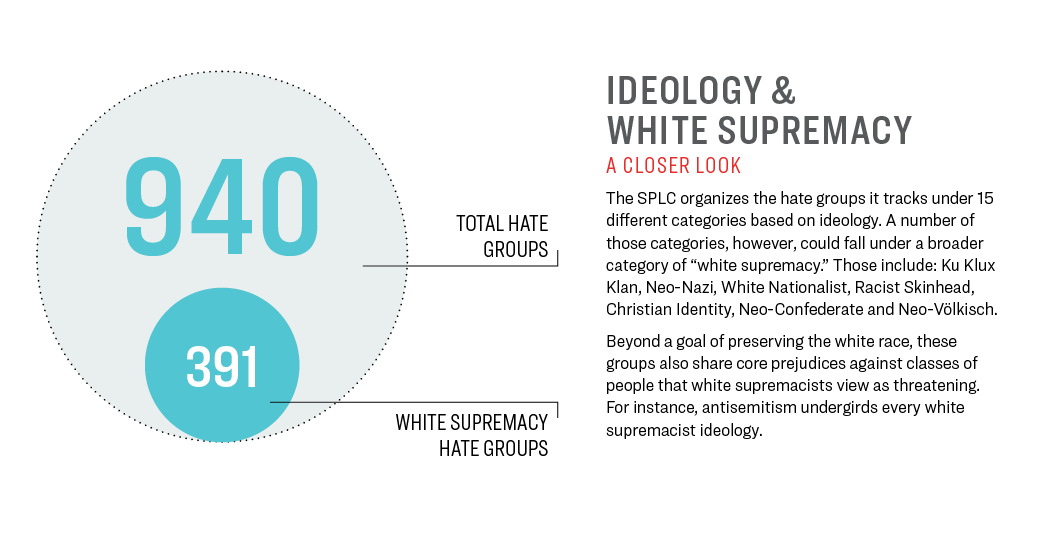 Why does the SPLC compile a list of hate groups?

Hate groups tear at the fabric of our society and instill fear in entire communities. American history is rife with prejudice against groups and individuals because of their race, religion, disability, sexual orientation or other characteristics. As a nation, we’ve made a lot of progress, but our history of white supremacy lingers in institutional racism, stereotyping and unequal treatment of people of color and others. Hate also plays a particular role in crime, and thus the existence and location of hate groups is important to law enforcement. The U.S. Department of Justice warns that hate crimes, more than any other crime, can trigger community conflict, civil disturbances, and even riots. For all their “patriotic” rhetoric, hate groups and their imitators are really trying to divide us; their views are fundamentally anti-democratic and need to be exposed and countered.

Does violence play a role in designating a hate group? 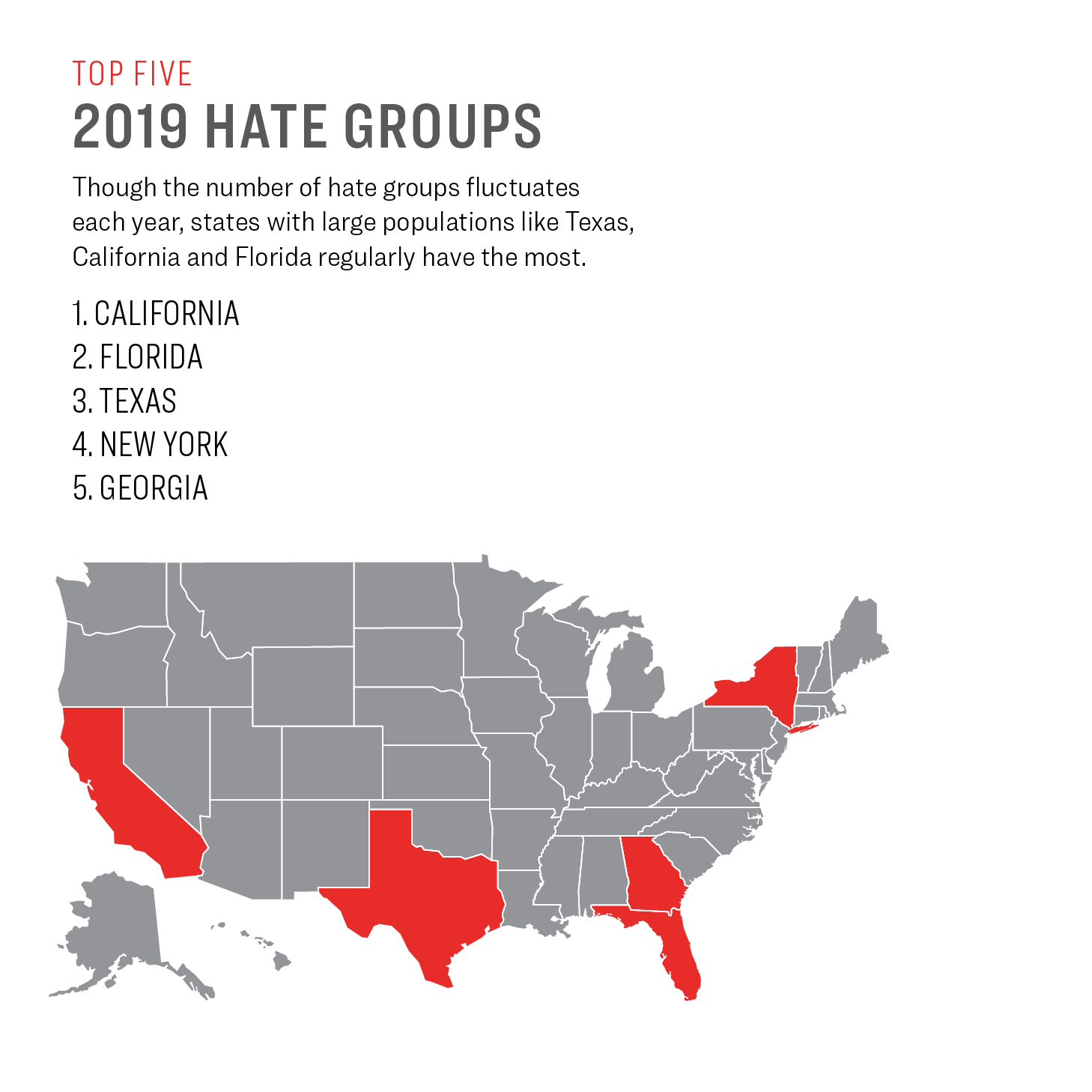 Vilifying or demonizing groups of people on the basis of their immutable characteristics, such as race or ethnicity, often inspires or is a precursor to violence. But violence itself is not a requirement for being listed as a hate group. A group’s ideology can inspire hate violence even when the group itself does not engage in violent activity. For example, Dylann Roof was not a member of any hate group, but his racist massacre at a Charleston, South Carolina, church in 2015 was inspired by the ideology of the white nationalist group Council of Conservative Citizens (CCC), among other hate group websites. The CCC has no track record of leaders or members engaging in violence, but its ideas can clearly prompt hate violence. Conversely, there are some violent groups that are not hate groups. For example, the SPLC does not list racist prison gangs as hate groups, because their goals are primarily criminal, not ideological.