Extremists across the United States and the world continued to launch attacks during 2019. But the worst carnage came in Christchurch, New Zealand, on March 15, when a white nationalist gunman attacked two mosques, killing 51 people and injuring 49. 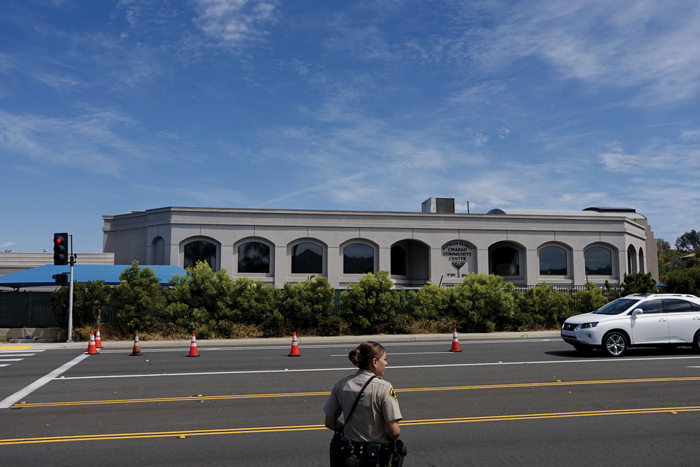 A man armed with an assault rifle attacks the Chabad of Poway synagogue on the last day of the Passover holiday, killing a woman and injuring three other people, including the rabbi. Police arrested a 19-year-old man who said, according to a federal affidavit, that “Jewish people are destroying the white race.” An online document under the man’s name is filled with racist slurs and white nationalist conspiracy theories, and the author says he was inspired by the white nationalist terrorist in New Zealand. 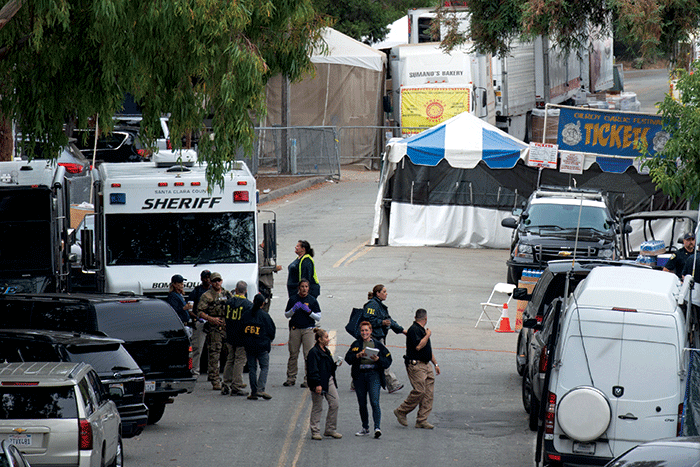 A man opens fire with a semi-automatic rifle at the Gilroy Garlic Festival, killing three people—including a 6-year-old boy and a 13-year-old girl—and wounding 17.

The attacker, a 19-year-old man, is shot multiple times by police before killing himself at the scene. A social media post attributed to him touted the text Might is Right, widely popular among white nationalists. The FBI opened a domestic terrorism investigation after finding a potential list of targets in his car. 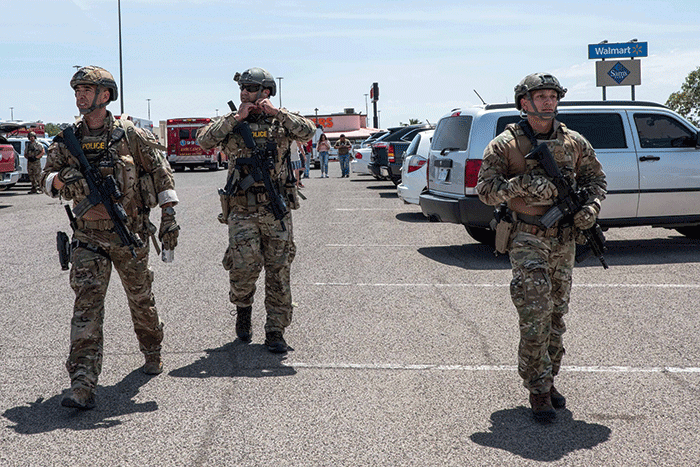 A man opens fire with an AK-47 style assault rifle in a Walmart, killing 22 and injuring 26, as parents and children take advantage of a tax-free shopping day before the beginning of school. After surrendering to police, the 21-year-old from Allen, Texas, is charged with capital murder. Authorities believe he was the author of a racist, anti-immigrant screed posted online minutes before the attack. The author expresses white nationalist themes about “ethnic displacement,” expresses displeasure at “race-mixing,” refers to the attack as a response to the “Hispanic invasion of Texas,” and mentions the Christchurch, New Zealand, shooter. 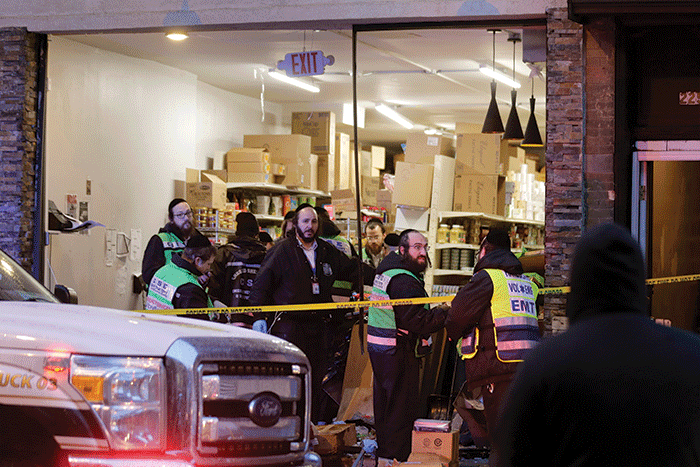 Three people are killed when two assailants open fire at a kosher supermarket, and a police officer is shot and killed moments earlier by the pair at a nearby cemetery. Both attackers, a 47-year-old man and a 50-year-old woman, are killed during a prolonged gunfight with police. News reports link the man to a Black separatist movement and to antisemitic posts online. 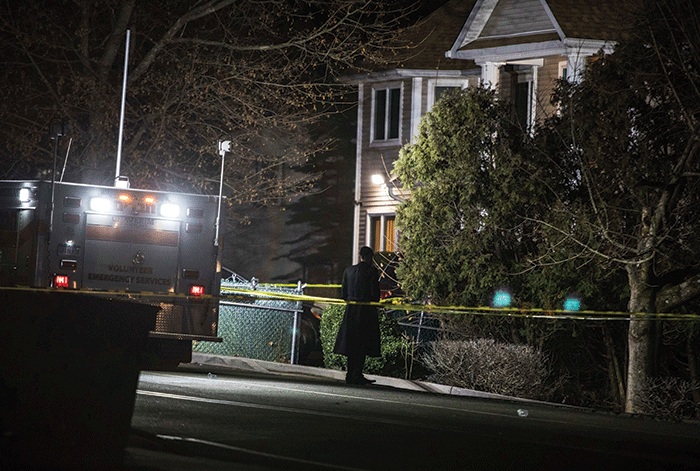 A man armed with a machete bursts into a rabbi’s home and begins slashing people, wounding at least six, during a Hanukkah celebration. Police charge a 37-year-old man with six counts of attempted murder in what New York Gov. Andrew Cuomo calls an act of “domestic terrorism.” The man pleads not guilty, and his family says he has a history of mental illness and “no known history of antisemitism.” But authorities say they found hand-written journals with “several pages of antisemitic references” at his residence. A criminal complaint says a journal appears to reference the Black Hebrew Israelite movement.

Here are some of the most notable alleged extremist plots that led to arrests in 2019.

Police arrest four young men, some of them teens, who they say are plotting to detonate bombs at a 200-member Muslim enclave in Delaware. They discussed the plot on a social media platform popular among white supremacists. Police uncover a cache of 23 firearms and three explosive devices. All four suspects plead guilty and are sentenced to prison terms.

The FBI arrests Coast Guard Lt. Christopher Paul Hasson, 50, who was based at Coast Guard headquarters in Washington, D.C., and confiscate a stockpile of weapons—including seven rifles, two shotguns, four pistols, two revolvers and two silencers—from his home. Prosecutors say he is a self-identified white nationalist and describe him in court papers as a “domestic terrorist” who intended “to murder innocent civilians on a scale rarely seen in this country.” They say he had studied the manifesto of the Norwegian terrorist who killed 77 people in 2011 and had been plotting to kill Democratic politicians, professors, Supreme Court judges and “leftists in general.” Hasson pleads guilty to drug and weapons charges.

Following an investigation by the FBI-led Joint Task Force on Terrorism, agents seize bomb-making materials and an AR-15 from the home of Conor Climo, 23, who is charged with a weapons violation. Prosecutors say Climo communicated online with white supremacists, including members of two neo-Nazi groups, and that he used encrypted messages to discuss attacking a Las Vegas synagogue and making improvised explosive devices (IEDs). Investigators say they found sketches portraying IEDs and infantry squads attacking a gay bar in Las Vegas.

Florida state police arrest Richard Dean Clayton, 26, for allegedly threatening on Facebook to attack a Walmart a day after a gunman killed 22 people at a Walmart in El Paso, Texas. Authorities say Clayton had a history of posting threats and racist and antisemitic comments, including an image of a swastika and references to an ethnostate.

Police arrest self-described white nationalist James Patrick Reardon, 20, after searching his parents’ home and finding a cache of weapons, including two assault rifles, a gas mask, bulletproof armor and a large amount of ammunition. Authorities say an Instagram post indicated he might be plotting an attack against a Jewish community center. 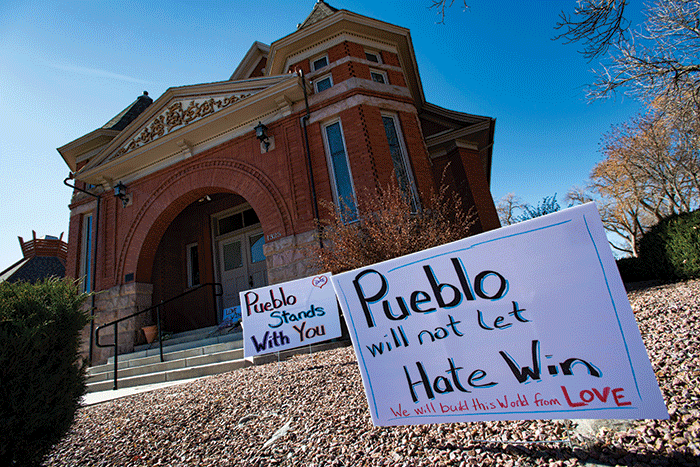 In a sting operation, the FBI arrests self-proclaimed white supremacist Richard Holzer, 27, who they say was plotting to blow up a historic synagogue and poison congregants as part of a “racial holy war.” He was taken into custody when he picked up two pipe bombs and 14 sticks of dynamite from undercover agents and was wearing a Nazi armband and carrying a copy of Mein Kampf.