The distribution of flyers remained a common tactic employed by groups on the radical right in 2019. The SPLC recorded more than 1,500 flyering incidents during the year.

These flyers are used to recruit new members; intimidate and target individuals; respond to and advertise public events; or simply promote a group’s bigotry. The content runs the gamut from mildly offensive to overtly racist.

As in 2018, white nationalist groups posted and distributed more flyers than groups in other sectors of the radical right.

However, while Identity Evropa led the way in flyering efforts in 2018, the number of Patriot Front flyers distributed in 2019 far exceeded any other group.

Members of Patriot Front participated in a campaign to spread their rhetoric in both the collegiate and public spheres. Most notably, the group’s members posted flyers on college campuses at least 335 times, a six-fold increase over the 53 times they posted flyers at academic institutions last year. This jump was augmented by significant flyering efforts in the beginning months of the 2019 fall semester. Overall, Patriot Front flyer drops (including those beyond campuses) rose by roughly 260 percent, reflecting considerable growth in the number of chapters in 2019.

On the other hand, Identity Evropa, which led flyering incidents in 2018, failed to sustain its efforts in 2019. Following the release of its Discord chat logs by the nonprofit organization Unicorn Riot in March, the group rebranded as the American Identity Movement. With the name change also came a change in the aesthetic of its flyers. The group moved away from borderline innocuous slogans superimposed over marble statues of Greek gods into red, white and blue flyers steeped in nostalgia for Cold War propaganda.

In addition, members of Patriot Front nearly doubled the group’s efforts to hang its banners in public places, while the number of banners displayed by members of American Identity Movement was more than halved. Unlike posting flyers, hanging a banner signals a coordinated effort among a small collection of group members, likely illustrating the existence of a chapter in that area.

The number of Ku Klux Klan flyers disseminated in 2019 was significantly lower than the previous year. The Loyal White Knights, based in Pelham, North Carolina, had previously carried out the majority of flyering incidents. However, as the number of its chapters dipped, so did its flyering efforts in 2019. Most notably, the Honorable Sacred Knights, based in Madison, Indiana, distributed flyers several times in advance of a poorly attended public Klan event over Labor Day Weekend. 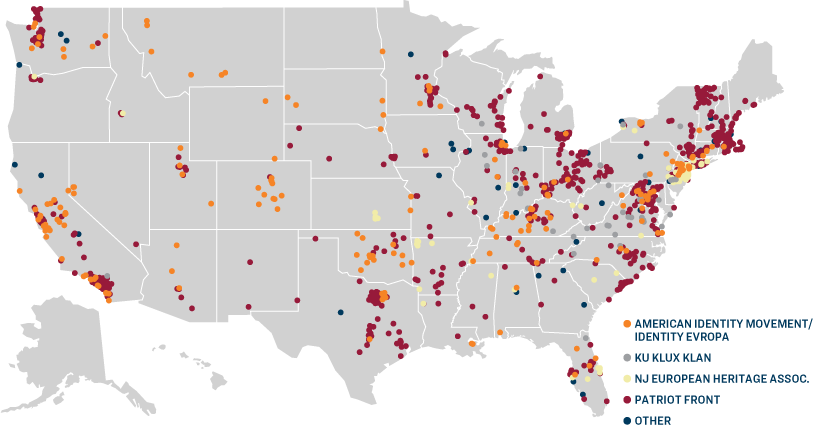