Before the COVID-19 pandemic, Alexis Carr was able to knock on doors in Montgomery, Alabama, register people to vote, instruct them on voting rights and encourage them to cast their ballots on Election Day.

“We were just walking around the neighborhoods in Montgomery and getting information to the residents, letting them know like, hey, if you can’t get to a polling station, there’s a number to call,” she said. “We’ll do that for you. Or even if you’re a person with a felony conviction, there are steps that you can take to be able to exercise your rights.”

But now, with almost everyone encouraged or ordered to stay home or keep a safe distance of at least six feet from other people to avoid spreading the coronavirus, Carr’s get-out-the vote drive has come to a screeching halt.

“It’s kind of been placed on hold,” said Carr, a volunteer for Rollin’ to the Polls, a nonprofit that engages potential voters and offers free rides to polling places in Montgomery. “It felt like everything was being put on pause temporarily.” 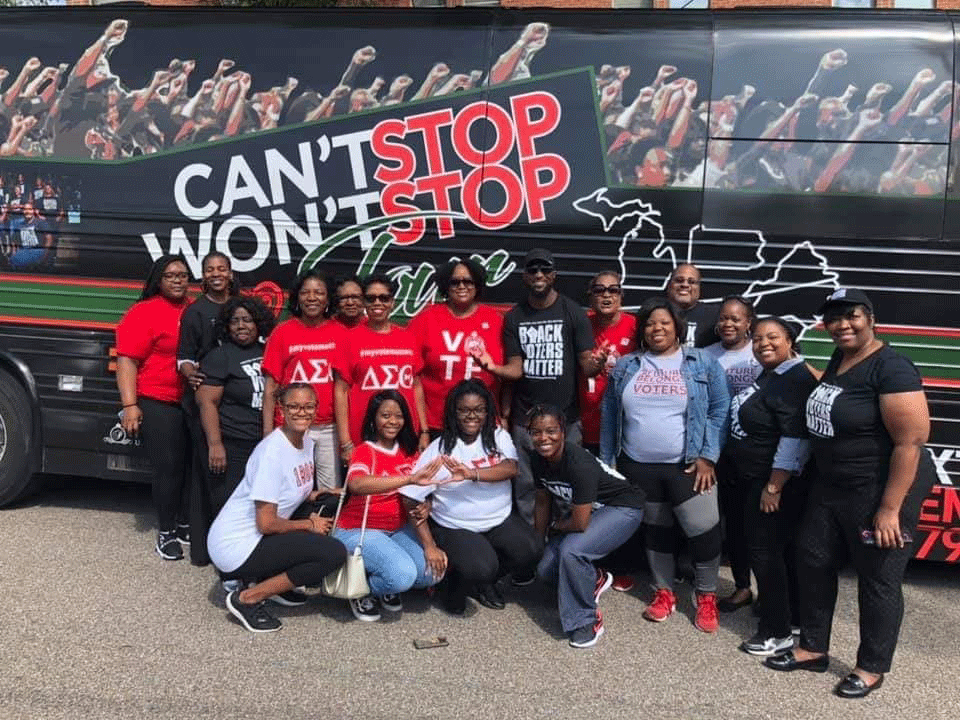 Volunteer Alexis Carr is the first person on the left in the front row. Photo courtesy of Alexis Carr.

In a normal election year, voter registration organizations like Rollin’ to the Polls are busy sending out large numbers of organizers to neighborhoods, supermarkets, churches and other community gathering places.

Independent, grassroots organizations that do the bulk of the on-the-ground voter registration work are planning for a worst-case scenario involving curfews, shutdowns and a lack of door-knocking that could last until the Nov. 3 general election.

“It has been a big concern for us in terms of our operation for Rollin’ to the Polls because a lot of what we do is physical, on-the-ground contact,” said Kynesha Brown, director of Rollin’ to the Polls, which was founded by the Montgomery Alumnae Chapter of Delta Sigma Theta. “So we have been having some strategy calls to kind of explore what our other options are – if any – if this doesn’t get lifted any time soon.”

Jason Barnes, a community organizer who is also the young adult chair for the Metro Montgomery NAACP, said the traditional knock-on-doors effort has moved online. “For community organizers here in the state, particularly in Montgomery, efforts like Kynesha Brown’s Rollin’ to the Polls have to be converted to a digital format,” he said.

Peer-to-peer texting applications like Hustle can help get the word out to voters during the pandemic, he said. Facebook is also useful.

“Facebook is the number-one-used platform in the state of Alabama,” he said.

But while older voters – the majority of the voting base – tend to use Facebook, grassroots organizations are also reaching out to younger people on other platforms.

“People are looking at using Tik Tok and using Twitter and Instagram and Snapchat and those different platforms to meet that younger base,” he said. “But that older base, it has to be on Facebook because that’s where they interact.”

There is one major drawback to digital get-out-the-vote efforts, he said: Many Black, Latinx and Native American people, particularly in the rural parts of Alabama, don’t have access to high-speed internet. That means even more emphasis must be placed on absentee and mail-in ballots. Those are among the recommendations that a coalition of civil rights groups – including the SPLC – recently urged Alabama Secretary of State John Merrill to adopt.

The SPLC, the NAACP Legal Defense & Educational Fund, Inc. (LDF), Greater Birmingham Ministries, the Alabama State Conference of the NAACP, and the Alabama Disabilities Advocacy Program (ADAP) jointly encouraged Merrill to develop guidance and administrative rules that will enable every eligible voter in Alabama to cast a ballot.

The groups would like to see their recommendations put in place in time for the upcoming Alabama primary runoff election, which has been pushed back to July 14 because of the pandemic. 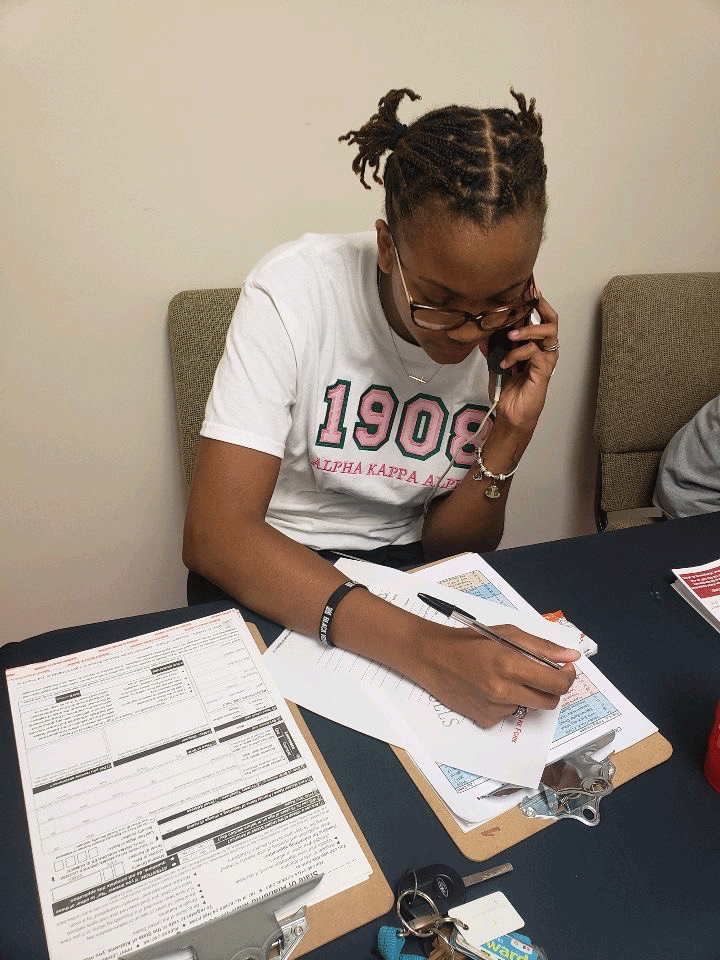 The coalition’s other recommendations include: clarifying the fact that people seeking to vote by absentee ballot because of COVID-19 concerns are exempted from the absentee voting requirement for a photocopy of their photo ID;  extending the absentee ballot request deadline to 3 p.m. on Election Day;  recruiting poll workers, especially those of lower susceptibility to the virus; and undertaking an aggressive public education plan to teach voters how to exercise these new options.

Additionally, the groups are calling on Merrill to allow curbside voting; to allow absentee ballots to be dropped off at any polling place by any person designated by the voter; and to implement these measures for the benefit of all voters who plan to vote in the July 14 runoff election.

The groups especially want those protections in place for elderly voters, low-income voters, voters with disabilities, and voters of color who are less likely to have access to the health care, social networks, and transportation necessary to feel safe voting in-person.

“Alabamians are making great sacrifices as the coronavirus changes so many aspects of our lives,” said Caren Short, senior staff attorney for the SPLC. “But no Alabama voter should have to sacrifice their ability to cast a ballot free from fear and discrimination, and we urge Secretary Merrill to take these recommendations seriously.”

The social distancing protocols that people are following during the pandemic have forced vote mobilizers to rely on digital and phone methods of encouraging people to vote. But those strategies are not as effective as canvassing and in-person interactions, said Rachel Knowles, an outreach paralegal for the SPLC’s Voting Rights Practice Group.

In-person canvassers take registration forms directly to prospective voters, collect their signatures on the spot, and file the completed paperwork on their behalf. But that doesn’t work without face-to-face interaction, Knowles said.

“If folks don’t have mail supplies and a printer at home, they will have to go outside their house,” Knowles said, adding that low-income people are more likely to be without these resources. “Online voter registration is great, but it is not accessible to everyone. It’s only accessible if you have an Alabama driver’s license. It just makes it harder to get folks registered.”

Just as it has affected virtually every other aspect of daily life – with many people working from home – the pandemic has forced get-out-the-vote organizers to cope with a new reality.

The SPLC will continue to support grassroots voter mobilization groups across the South as they pivot from in-person canvassing to digital-based platforms during the pandemic.

“Like three weeks ago, the only thing we were talking about were the Census and the election,” Barnes said. “Now every single call is about COVID-19. Every single nonprofit is moving to digital organizing. That’s been the move because that’s the only place where we can get work done.”