A man who died on June 2 in Alabama Department of Corrections (ADOC) custody with COVID-19 had chronic health problems and repeatedly sent letters over two years to the judge and clerk overseeing his case to raise concerns about his well-being, court records show. 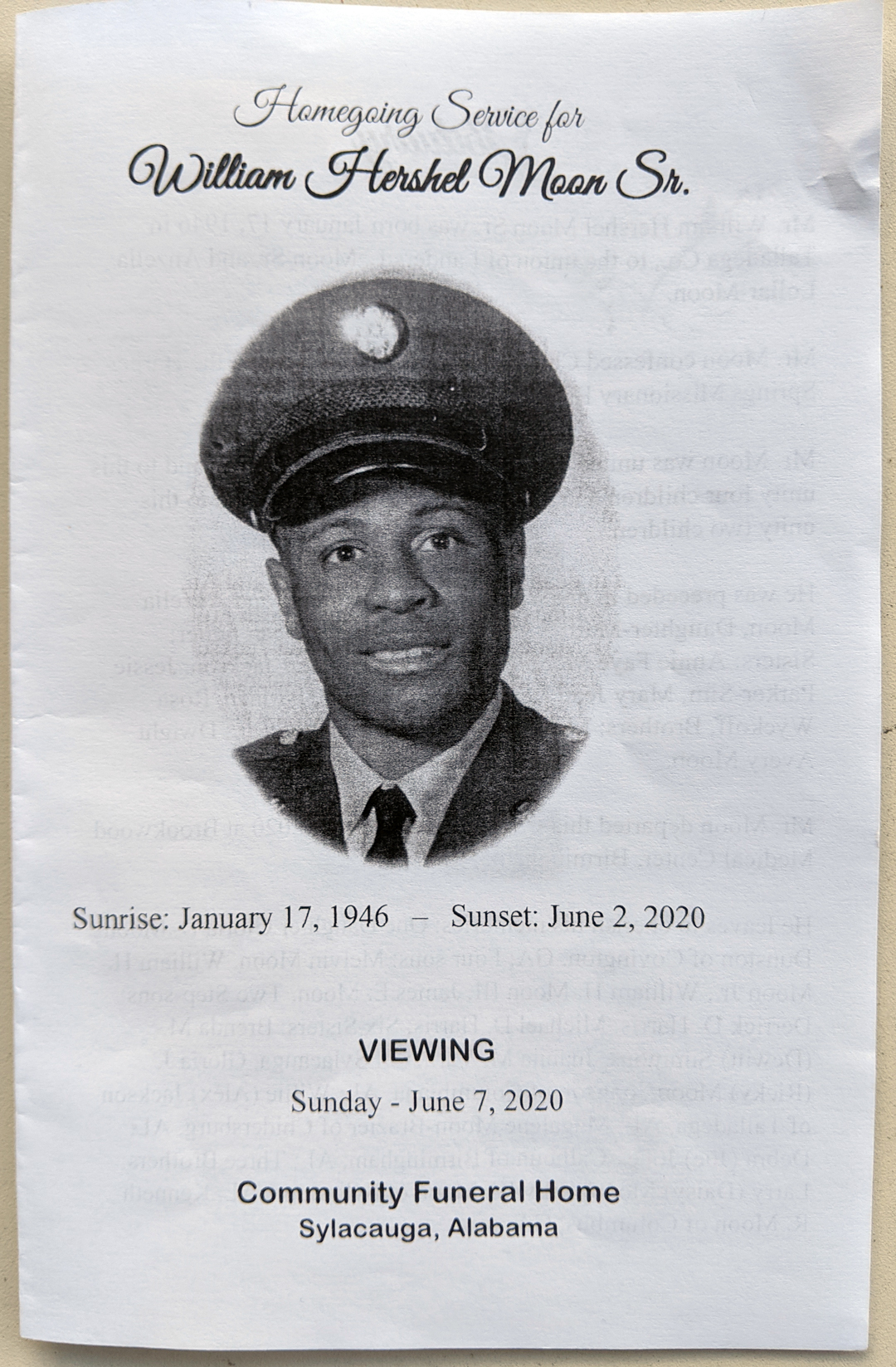 Photo courtesy of the Moon family

William Hershel Moon was denied parole in June 2019, and died at age 74 less than a year later amid a pandemic that experts warned would hit prisons hard. His was the second official “COVID-19 related inmate death” in the prisons, according to ADOC. He showed symptoms of COVID-19 and was taken to a hospital from St. Clair Correctional Facility. He then tested positive for the coronavirus, according to ADOC.

Moon’s sister, Magalene Brazier, 82, spoke to her brother for the last time that day via FaceTime. Doctors had to remove a breathing apparatus from his face so he could see her clearly. “They took the mask off of him for a few minutes for him to see ... and in just a little bit he couldn't breathe,” she said.

Had he been released before his death, Brazier said, she might have been able to find a way to care for him. “But he ended up with this coronavirus,” she said, noting his health history, which included a stroke and “heart and stomach problems.”

“He just couldn’t make it,” she said.

In a statement, ADOC referred to Moon as “a 74-year-old inmate with a known history of chronic, debilitating disease.” He was serving a life sentence with the possibility of parole and was among the more than 1,100 incarcerated people identified by the Southern Poverty Law Center (SPLC) in April to be at elevated risk of developing severe cases of COVID-19 due to age. He was admitted to prison in 2000.

Moon’s history of illnesses would have been no secret to anyone who looked at his court record. In a series of letters written from 2013 to 2014, Moon chronicled his deteriorating health to the court.

Moon was convicted of murder in 2000 in Jefferson County. In the first letter available in the court record, sent to the judge overseeing his case in August 2013, he wrote that the murder stemmed from a domestic dispute. Moon, a Black man, explained that he called Birmingham police to head off a confrontation, but the situation still escalated, ending in Moon striking a fatal blow to a man’s head with a wooden club, according to the indictment. Moon filed multiple motions for post-conviction relief while in prison.

In the first letter, he also noted that he took medication for his blood pressure and acid reflux but was “in good health.”

Things changed just a month later. In a letter dated Sept. 23, 2013, he wrote to the circuit clerk that his health was deteriorating, and he was scheduled for an electrocardiogram. “I am getting into bad bad health,” he wrote. “I’m not getting the treatment that I need.”

He continued: “I hope that someone that read[s] this will understand what [is] going on with me and would get me release[d] so that I can save myself. I am at you all mercy. [sic]”

In December 2013, Moon was set for a parole hearing, but was not granted release. Six months later, he wrote to the clerk again to raise another alarm about his health.

“Why [is] the state still holding me in prison, my health is going bad and I cannot get the medical help that I need,” he said. “I don’t know what motion to file no more, it [is an] overcrowded prison and the danger level is getting very high, I need to be release[d] [for] health reason[s] ... I am just here doing nothing but suffering.” He wrote that his illness was a digestive disorder, which Brazier confirmed he had.

The final letter from Moon available in the record was received by the court on Aug. 1, 2014. “I went ... to see a doctor, and they took some picture[s] of my stomach and ... over the years, I have a buildup of food fungus that need[s] removing,” he wrote. “I do not know what to do at this time. I need help. I am at your mercy.”

Moon later suffered a stroke and was hospitalized, according to Brazier. She said the stroke made it difficult for him to write and walk without assistance. He did get some help, Brazier said, after she wrote to prison officials in Montgomery on his behalf.

Since the coronavirus outbreak began, advocates and public health experts have called on state officials to release people like Moon who are more likely to develop severe cases of the disease.

One way to do that is through Alabama’s Medical Parole Act, which allows for the release of some incarcerated people who are “geriatric,” meaning they are age 60 or older, suffer from debilitating age-related diseases, need assistance with daily activities like walking and pose a low risk to the community.

Data from 2019 obtained by the SPLC shows the program was extremely restrictive last year; ADOC referred 19 eligible incarcerated people for medical parole. The parole board granted it in just four cases.

The state could also ramp up parole hearings and releases. But even as advocates, law professors, public health experts and a former parole board chair have called on the Alabama Bureau of Pardons and Paroles (BPP) to set more hearings and, perhaps, release more people from prison amid the pandemic, the BPP last month granted parole in just 15 of 160 cases.

Among those granted parole, 11 were white and four were Black, though a majority of people with parole hearings in May were Black.

Moon went up for parole again in June 2019, but was denied. Brazier, who went to the hearing in Montgomery, said she was upset when she learned she wouldn’t get to see him. Had he been released before his death, Brazier explained, his family could have come together to take care of him with assistance from home health nurses.

“I think if a person is in there, whether they’re in there for two days or life, if he’s sick or something’s wrong with him, and he can come home where his family can take care of him, let him out of there,” she said.

Correction: This story previously misreported the year of Moon's conviction. It was 2000, not 1999.