When Daniele Anderson was a student at the U.S. Naval Academy in Annapolis, Maryland, she posted flyers around the campus about Black History Month events she was organizing, but they were repeatedly torn down.

At the lunch table where they all had to sit together, her white male colleagues asked her – one of the few Black women attending the academy – why there was not a white heritage or history month.

Underscoring that point, an English professor at the academy wrote a derogatory op-ed in The New York Times while she was there, disparaging students who came from military preparatory schools like the one Anderson attended. Many students at those schools – like Anderson – were Black or Latinx.

To make matters worse, the academy superintendent’s mansion was named after Franklin Buchanan, a naval commander who switched sides in the midst of the Civil War and fought for the Confederate Navy.

Today, Anderson, who served aboard Navy ships for five and a half years after graduating from the academy, is the chief strategy officer at the Black Veterans Project, a nonprofit whose mission is to advance research around racial disparities and inequities in the military and across the veteran landscape.

And she, like many others, is calling for the removal of Confederate names and symbols from military bases and installations, as well as from all public spaces.

After the police killing of George Floyd, which catalyzed a national reckoning on racial injustice, polls show that a majority of Americans support the removal of markers celebrating Confederate generals and others who fought against the United States to preserve slavery. 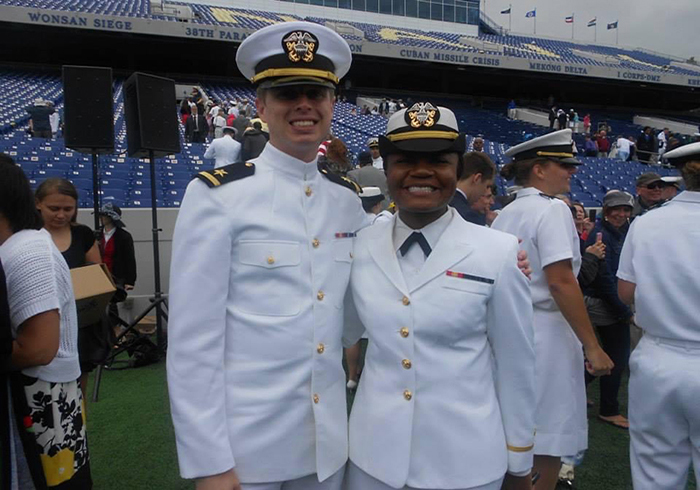 Currently chief strategy officer at the Black Veterans Project, Daniele Anderson served aboard Navy ships for five and a half years. Anderson says removing Confederate names and symbols from military bases and installations would be a step toward racial reconciliation with Black people who served their country. Here, she is photographed with classmate Alex Kane following their graduation and commissioning ceremony at the U.S. Naval Academy in May 2013.

‘A step at racial reconciliation’

“I certainly think that removing these Confederate names is just the right thing to do, and it’s just a step in the right direction,” Anderson said. “It’s a step at racial reconciliation with Black people who served this country before they were recognized for their service.”

When the COVID-19 pandemic ends, members of the Black Veterans Project plan to tour the country, interview Black veterans and create a digital monument to Black servicemembers in order to create a more inclusive picture of veteran history than is currently available.

The nonprofit group is also pushing for the release of data on racial bias in the military. Since 2013, the military has been required to collect this information along with data about gender bias, but so far it has not shared the results, she said.

What’s more, the organization has filed an amicus – or friend-of-the-court – brief in the U.S. Supreme Court case Gary L. Jackson v. Kenneth J. Braithwaite, in support of a Black man who is suing the Department of the Navy over discrimination he experienced in the Marine Corps.

When it comes to military bases named for Confederate officers, a breakthrough might be on the horizon. Both the House and Senate have passed an annual defense authorization bill that would require changes to at least 10 bases, including Fort Bragg in North Carolina, Fort Hood in Texas and Fort Benning in Georgia.

The $740.5 billion appropriations bill, however, likely won’t receive final congressional approval before the Nov. 3 elections – and President Trump has vowed to veto the bipartisan legislation if it requires the renaming of bases. Trump has consistently dismissed concerns that the Confederate flag symbolizes white supremacy and has called Confederate monuments “beautiful.”

Anderson, however, pointed out that the United Daughters of the Confederacy erected hundreds of statues at local courthouses and other public spaces across the South to distort American history and celebrate traitors to the Union who fought to keep Black people enslaved. 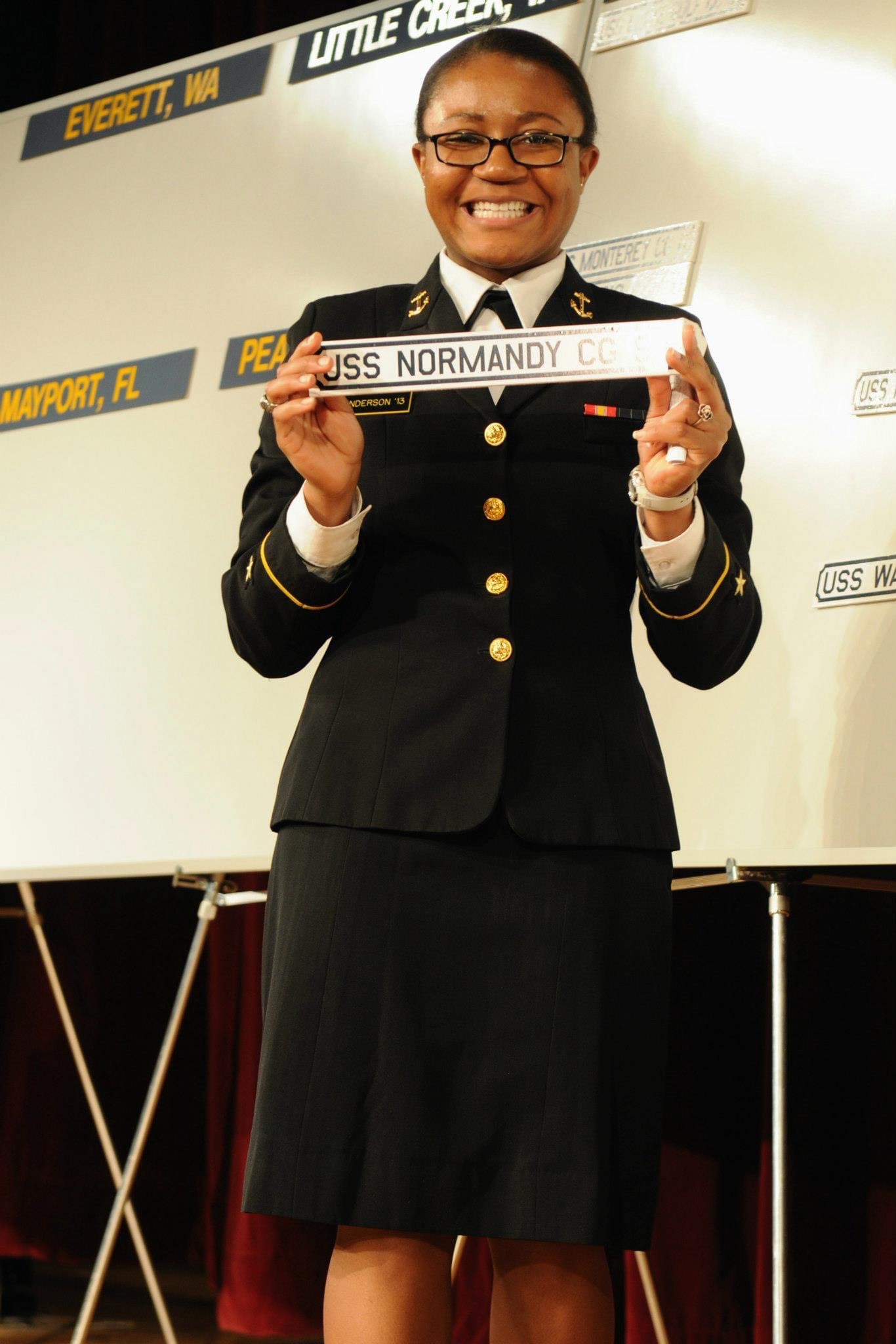 Throughout her tour of duty, Anderson often felt isolated. She served as an officer on two guided missile cruisers. On the first, she was one of only two Black female officers. On the second, she was the only Black female officer until another came on board toward the end of her assignment. “Leaders and commanders … should encourage open discussion about racism and sexism in the military,” she says. Here, Anderson is photographed at the U.S. Naval Academy’s Ship Selection Night in January 2013.

In its 2016 report Whose Heritage? (updated in 2019), the Southern Poverty Law Center (SPLC) documented more than 1,700 monuments, flags, place names and other Confederate symbols in public spaces across the country. The SPLC study found that most of these were put into place during the beginning of the Jim Crow era and again during the civil rights movement. The 2015 white supremacist attack on a church in Charleston, South Carolina, which left nine Black people dead, sparked a nationwide movement to remove them, and the effort has only accelerated since George Floyd was killed by a white police officer last May.

SPLC Chief of Staff Lecia Brooks said she is encouraged by the example of the U.S. Marine Corps, which announced in June that it is banning the Confederate battle flag, including its appearance on bumper stickers, mugs and T-shirts, as well as on public spaces at all of its installations here and abroad.

“For over 100 years, the Confederate flag has stood as a symbol of white supremacy and the enslavement of Black people,” Brooks said. “Confederate symbols have no place in our public spaces or institutions.”

When Anderson’s friend Timothy Berry was a senior at West Point – the military academy for the U.S. Army – he lived in Lee Barracks, named in honor of Gen. Robert E. Lee, who led the Confederate Army.

“He’s one of the Confederate generals who were memorialized at the academy, and I’m hoping that in the next few years, his name is replaced,” he said.

After graduating from West Point in 2013, Berry served in the 101st Airborne Division from 2014 to 2016. His total active duty service spanned five years.

Citing inequities in the military, Berry – who was a U.S. Army captain – left the service in 2018 and founded a nonprofit called Collaborate and Graduate, which helps Black and Latinx students prepare for the SAT and ACT college entrance exams.

Whenever he has recruited Black students to his alma mater, he has told them about his time in Lee Barracks, but not without mixed feelings.

Preserving Confederate monuments disrespects Black soldiers as well as Union soldiers who fought and died for their country, Berry said.

As one of fewer than 20 Black women in her class of 1,200 at the Naval Academy, Anderson often felt isolated and unsupported.

She played rugby, was a powerlifter, and had come from a mostly minority military preparatory school. All of these facts made her an outcast because her white counterparts felt that she had not earned the right to be there, even though she was a good student in high school.

The New York Times op-ed written by an English professor only deepened her sense of alienation.

“Around this time, when there was a lot of upheaval around the country with affirmative action, he writes an article about the Naval Academy preparatory school as sort of really a fast track for people, minorities, for Black people, for athletes to sort of get a foot in the door to the Naval Academy that they don’t deserve.”

Even though she was never in that professor’s class, she wondered if her own professors believed the same thing.

“It was definitely a feeling of, wow, this is sort of what people think about me,” she said. “Is this something that truly everyone believes?”

For example, classmates – who were asked to issue peer rankings that influenced each other’s overall grade-point averages – frequently ranked their Black classmates lower than their white counterparts.

Black students would even compare notes about this seemingly unfair ranking system.

“We’d be at the bottom five and we’d also be labeled as aggressive,” she said. 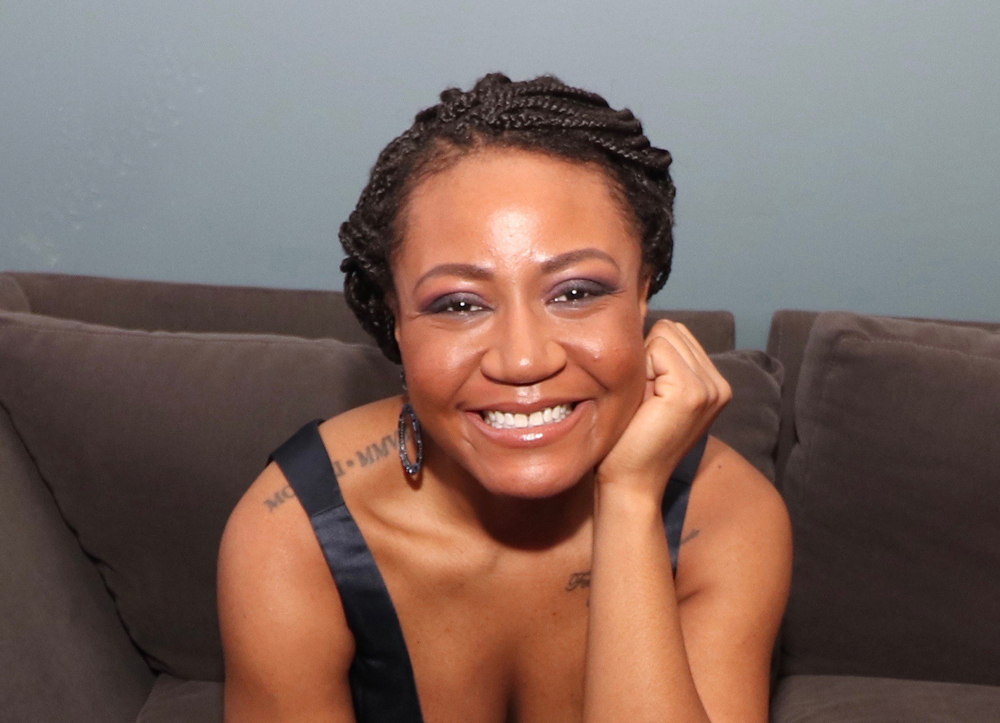 During her SPLC interview, Anderson pointed out that the United Daughters of the Confederacy erected hundreds of statues at local courthouses and other public spaces across the South to distort American history and celebrate traitors to the Union who fought to keep Black people enslaved. She believes that Confederate monuments belong in museums, where they can be studied and placed in their proper historical context. Here, she participates in a photo shoot for breast cancer survivors in February 2020.

Her racial isolation continued after graduation, when she served as an officer on two guided missile cruisers. On the first ship, she was one of only two Black female officers. The other left halfway through the assignment. On the second, she was the only Black female officer until another came on board toward the end of her assignment.

“I knew I wanted to get out of the Navy. After about a year and a half, I realized that this wasn’t for me.”

However, she stayed another four years, even though she observed not only rampant racism but also sexism and homophobia. “All of these things sort of congregated together. The environment itself kind of breeds other vices.”

‘A place of honor’

Leaders and commanders in the armed forces should encourage open discussion about racism and sexism in the military, Anderson said, and they should remove the names of Confederate soldiers from military bases and other installations because – among other reasons – they send the wrong message to Black servicemembers.

Anderson believes that Confederate monuments belong in museums, where they can be studied and placed in their proper historical context.

“I’m a historian myself and I could spend all day in a museum,” she said. “I love reading. But these [military installations] aren’t museums. This is a place of honor. If somebody named a building or a base after me, it would certainly be an honor.”

Veterans and active servicemembers need to recognize military duty and history, she said.

“But it doesn’t have to be done by erecting certain monuments and giving Confederate traitors a place of honor.”