Most people see hate filtered through the individual events that reach our daily lives or news feeds – a chance encounter, a video, a story from a friend. But hate rarely emerges at random. There are patterns, sources, and cultures that give rise to hateful trends. When our team at the podcast Sounds Like Hate was approached with a trove of secret recordings from the Base’s vetting room for domestic terrorists in training, our goal was to understand the patterns in this data. You can hear the full story of our investigation by listening to our podcast series.

The Base is a terrorist organization that began in 2018 to advance a white supremacist agenda​ ​of the collapse of America, an impending race war, and preparation for ​violence. Each recording contains a vetting call where members of the Base talk to potential recruits over the messaging app Wire. We were faced with the task of analyzing a significant amount of data, 83 hours in total. In this post, we will describe how we applied statistical analysis, data visualization, and machine learning to understand the trends beneath the hate. 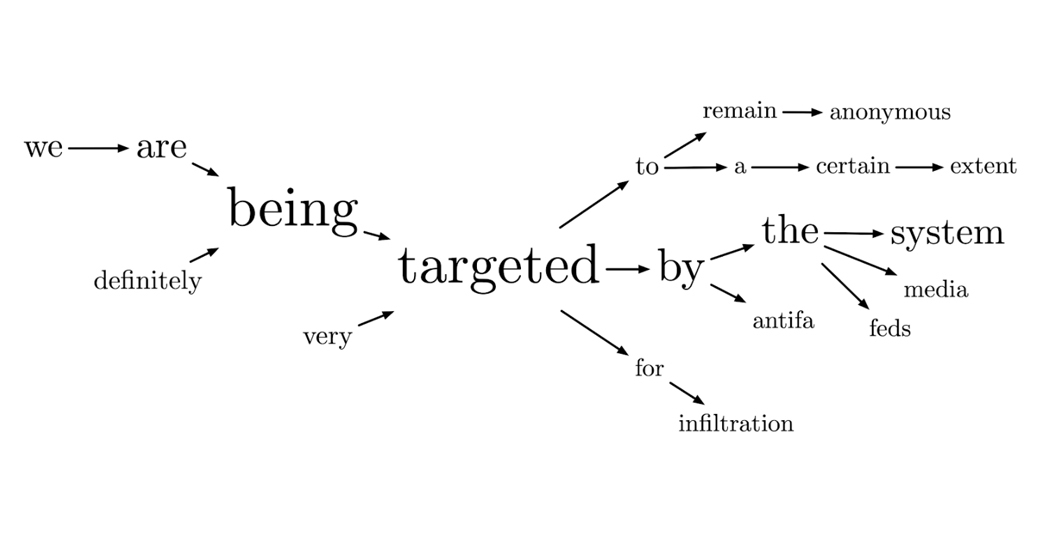 What causes people to become neo-Nazis?

To be clear, these vetting calls are not about conversion. The men who apply for membership are already believers.  For instance, the men on these secret recordings share an interest in president Trump. His name was brought up 69 times and was mentioned in 18% of all conversations. While they didn’t all agree with him, they all agreed he was serving their agenda. ​“It’s a kind of like we're climbing a ladder. We hit a rung and we hit another rung on a ladder. And so I think this next election will be just interesting. And depending if Trump wins and if the left, depending on how bad they freak out, how bad they riot and things like that. There's potential for some, you know, mass kind of lawlessness and things like that.​“ [Speaker 86]

The central theme of the Base’s neo-Nazi doctrine is whiteness, both as a race and as a culture. In the recordings, “white” was mentioned more than “Black,” “Jew,” or any other racial/ethnic term combined. The most commonly mentioned phrases including “white” were “white nationalism,” “pro-white,” “white people,” and “white power.” When discussing white people, recruits would frequently extol their perceived virtues of whiteness and bemoan the perceived decline of the white race. For example, these are verbatim excerpts of the transcripts:

To further understand the context in which recruits would describe race, we generated word-tree visualizations that show how often an anchor word, like “race” (above) or “targeted” (below), is used in a sentence with words around it. We found that the term “race” was most commonly mentioned in “race mixing,” “race war,” and “the white race.” “Race mixing” was condemned as an affront to white supremacy, while a “race war” was a hope for the future. Base member “Erik” described how “if you look at the economy and this whole fiat currency, even if it doesn't collapse, it's just going to degenerate more and more until even the military starts to revolt. [...] Every empire falls, you know. So that's why I'd say just prepare for the fall.”

While these findings help explain the recruits’ ideology, they don’t fully explain how these people acquired their hate in the first place. To dig deeper, we wanted to compare the similarity between the recorded calls and other examples of hate speech. We used a machine learning model from the ​Berkeley D-Lab​ that was trained on data from Twitter and Reddit to distinguish positive and hateful speech. What they found surprised us: The vast majority of recorded speech was not considered hateful, and in fact much of it was classified as positive. These are in-group conversations among people who have shared ideologies and goals. In positive speech, recruits frequently mentioned “skills,” “knowledge,” “friends,” and a “mission” as reasons to join the Base.

Rinaldo Nazzaro, the founder of the Base, was recorded as saying: “What we're doing [...] is trying to instill in those that kind of create a vanguard that has the skills and abilities and the camaraderie in the form of the network to see us through the hard times that we're in.”

Through these findings, we can see that people sought out the Base due to its ideology and its sense of brotherhood. As Speaker 10 put it, “I've always fit in with a more racist crowd.”

Today, a disturbing trend is the continuing influx of young men that adopt a white supremacist ideology. Of the recruits in the audio recordings, 88% of them are under 30. They told stories of being converted by racist friends, of becoming a racist after being intimidated by a non-white person, and of reading racist literature disseminated in dark corners of the internet. But statistically, how are recruits most likely to find the Base?

To answer this question, we looked at the number of times recruits mentioned different internet discussion platforms and compared how these mentions change across age groups. 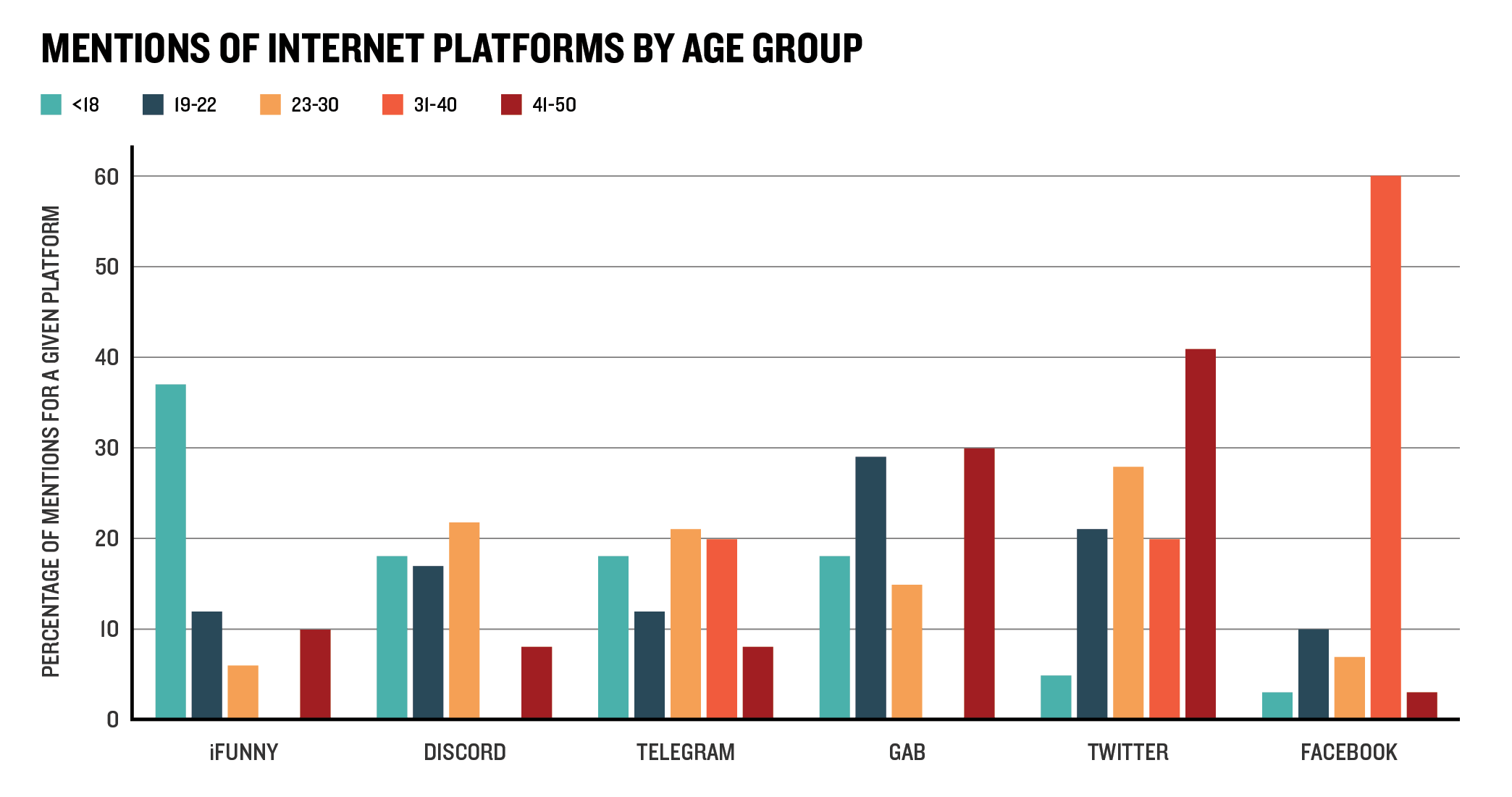 These findings reflect two basic facts: First, white supremacists aren’t limited to a single platform – their reach extends to every kind of social media. Second, each age group is being targeted for recruitment on their favorite platform: iFunny for young people, Gab and Twitter for college kids, and Facebook for the older generation.

White supremacist groups like the Base train recruits with the goal of engaging in violent terrorism. Their words reflect their goals. The phrases “shoot,” “gun,” or “firearm” appeared in two-thirds of the conversations, a total of 360 times.

The Base’s long-term mission is to establish an organization of terrorist cells across the United States. The specific term “cell” appeared in half of the conversations, a total of 209 times. They speak frequently about the need to build a widespread network that’s resilient to discovery by authorities.

How are they avoiding detection?

A central theme we uncovered in the recordings is a deep paranoia: a fear of being listened to, investigated, and found out. The Base’s recruiters tried to keep the vetting calls strictly about legal activities like meeting up, training in legal use of firearms, and distributing racist propaganda. The specific phrase “not doing anything illegal” came up in 30% of all conversations. Conversely, a word-tree diagram of the phrase “targeted” shows how the members felt they were targeted by many organizations: Antifa, the feds, the media, or just “the system.” 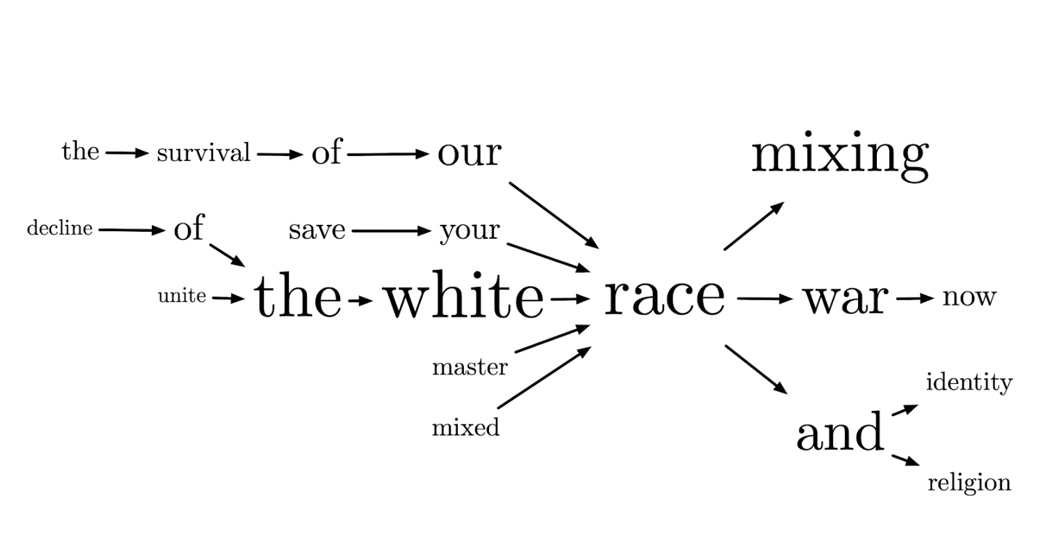 Base members frequently talked about how they restricted their discussions to avoid incriminating speech.

Speaker 15 described their practice of “bug out spots”: “Anything the system can touch into we keep it professional. [...] We have like these bug out spots where no like arms in the system can like interfere with what we're talking about, we just got to be like man to man discussing shit. And like during those times, we can go a lot more deeper into topics. But when it's on ... in chat rooms online on like iPhone or some shit like the Feds are already on their like, you can't, if you say something dumb, like they're going to check your shit, you know?”

In summary, by using machine learning and statistics to analyze the Base’s vetting calls, we were able to quantify certain aspects of hate. We revealed patterns of their behavior reflecting how neo-Nazis target men who are ideally younger, have military experience, have alliances with other hate groups, or own land. The implication is exponential growth of small violent cells across the nation and the spread of poisonous ideology delivering young men to terrorist organizations like the Base.