When Ricky Vickery stands by the side of the road, holding up a sign that says, “homeless and hungry,” he gets mixed reactions from motorists.

Some lower their car windows and hand him money. Some call him nasty names. Others mockingly wave wads of cash at the 57-year-old or pretend to eat a sandwich before speeding away.

Still others call police in Montgomery, Alabama, who have ticketed or jailed Vickery 15 times while enforcing a state law that bans panhandling.

But not all police are quick to arrest him.

“Some of them don’t like the law. But a lot of them do,” he said. “A lot of them think it’s a waste of their time, you know. It ain’t even police work, someone messing around with people who are standing there holding a sign.”

Recently, however, the police harassment of Vickery and other people in Montgomery who depend on the benevolence of strangers for their survival ended.

Under the terms of a lawsuit settlement that the Southern Poverty Law Center and its partners announced just before Thanksgiving, Montgomery police will no longer enforce two state statutes that authorize the arrest or ticketing of people who panhandle.

Vickery is one of at least 3,200 Alabama residents, including more than 230 families and 290 veterans, who experience homelessness, according to data from 2019. In Montgomery County, more than 350 people are homeless on any given night.

Panhandling laws, including those in Alabama, have their origins in vagrancy laws that were designed to criminalize Black people after the Civil War. The discriminatory impact continues today, with people of color disproportionately harmed by laws that target people who panhandle because of a lack of stable housing or resources.

The SPLC, ACLU of Alabama and the National Homelessness Law Center filed the federal lawsuit against the city of Montgomery in February on behalf of Vickery, Jonathan Singleton and Micki Holmes – three men who panhandle in the city – to challenge two unconstitutional state statutes that make it unlawful for anyone to “beg” or “solicit,” subjecting those who do so to fines or jail. 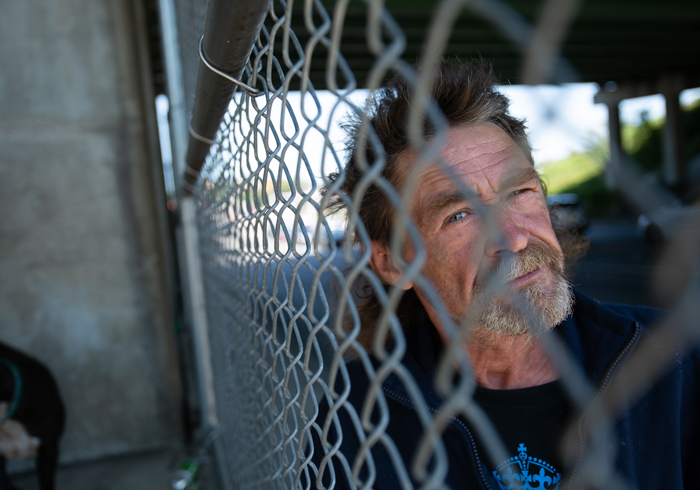 ​Under the terms of a lawsuit settlement that the Southern Poverty Law Center and its partners recently announced, Montgomery police will no longer enforce two Alabama statutes that authorize the arrest or ticketing of people who panhandle, including Ricky Vickery. “I’m happy about it,” he said. “It’ll be good for me.” Photo by Stephen Poff

In the same lawsuit, the organizations also sued Montgomery County and the state of Alabama for enforcing those statutes. The lawsuit against the state and county is still active, but the settlement ends the litigation against the city.

“The city of Montgomery is doing the right thing by ending its enforcement of Alabama’s inhumane and unconstitutional laws that criminalize homelessness and poverty,” said Ellen Degnan, an SPLC staff attorney. “Housing, not handcuffs, is the way to end homelessness. While the terms of this settlement – if correctly implemented – will help people who panhandle within the city limits of Montgomery, there are still thousands of Alabamians who remain at risk of being jailed or ticketed for simply asking for help.”

Punishing people who ask for help is not only illegal and inhumane, it also wastes limited public resources that should be invested in housing and support services for people in need, said Tristia Bauman, senior attorney at the National Homelessness Law Center.

“In the midst of a national homelessness crisis, governments should be investing in proven solutions – not wasting time and money on punitive approaches that only worsen the problem,” Bauman said.

‘Tomorrow it could be you’

The settlement with the city of Montgomery can be traced to a dispute that began in 2019, when the city passed an ordinance imposing mandatory jail time on people who panhandle. The city repealed the law, but only after dozens of people experiencing homelessness, clergy and service providers voiced their opposition to it at a city council meeting.

The city, however, continued enforcing two separate state statutes that criminalize panhandling. Between July 2018 and December 2019, the city issued more than 400 citations enforcing those statutes.

Singleton, 45, was cited or arrested at least eight times for standing by the side of a highway exit ramp, holding a sign that said: “HOMELESS. Today it is me, tomorrow it could be you.”

A former carpenter, he struggles with chronic illness – including kidney failure and diabetes – that makes it difficult for him to maintain stable employment, housing and health care. As a result, Singleton and Bella, his black pit bull, are at the mercy of other people.

Sometimes, the sign he holds up also asks for food and water.

“I’m not asking anybody for any money,” he said, adding that he is simply exercising his free speech rights.

The SPLC and its partners agree.

“We are pleased that Montgomery Mayor Steven Reed and the city council have recognized the wisdom of not punishing people who are simply exercising their First Amendment right to free speech,” said Micah West, senior staff attorney for the SPLC’s Economic Justice Project. “People like Jonathan Singleton and others who have enough courage to ask for help, despite facing disapproval and disrespect from passersby, do not need further harassment from the police. A person’s expression of their desire for compassion should not be punished as if it were a criminal act.”

JaTaune Bosby, executive director for the ACLU of Alabama, said, “Montgomery city officials must take this agreement seriously, ensuring that no person is criminalized for seeking assistance and finding better ways to address … the needs of those without housing in Montgomery.”

“They told me it was illegal to be homeless and said that I was being evicted from underneath the bridge where I was sleeping at the time,” he said.

So he decided to build his own makeshift house.

It started out as a tent near a fire he had built on a grassy hill near the highway exit. Over several months, using the construction skills he developed as a carpenter, he erected an 8-by-14-foot, wooden-frame structure on that spot.

He turned the pit where he had been burning wood into a fireplace, complete with its own chimney. Soon, he also had a window and a front door.

During the winter months, unlike other homeless people, Singleton felt safe and comfortable inside.

“Everybody out here was shaking in their boots when it was cold,” he said, chuckling. “I was sitting warm half-naked.”

But that semblance of safety and comfort came tumbling down earlier this year when the owner of a nearby hotel called the police, who came with a demolition crew to tear down the makeshift house. The hotel owner said the structure was on public land and was too close to his establishment.

Now, Singleton and his dog are again sleeping under a few blankets atop a cardboard box under the bridge or in a tent outside a friend’s house.

Vickery, whose mother recently passed away from COVID-19, is receiving help from the SPLC in getting his state identification card, medical records, birth certificate and other documents that will help him get his life on track, he said.

“I can’t even rent a motel room without a state ID,” said Vickery, who also plans to seek Social Security benefits. “Once I get that, I won’t have to stand out here and hold a sign.”

Vickery got an unexpected gift while holding his sign in a grassy area next to a highway exit ramp, as motorists stopped for a traffic signal.

A law enforcement officer reached out the window and handed him some money.

“She told me, ‘Don’t ever say nothing, OK? Because I might lose my job doing something like this,’” he said.

Image at top: Jonathan Singleton and his companion Bella are photographed by Stephen Poff in Montgomery, Alabama, on Sept. 30, 2020. According to data from 2019, Singleton is one of at least 3,200 Alabama residents who experience homelessness.