One of the powerful lessons we must take away from this week’s coup attempt by President Trump and his supporters is that 2021 is not a time for half measures in the fight against hate and extremism.

Yes, Wednesday began with hope. The results of the Senate runoff elections in Georgia offered proof that the South can help lead the way into a new political era. But the events at the U.S. Capitol reminded us of the racist violence that continues to threaten our country. This violence is bolstered by the infrastructure of white nationalist movements that the Southern Poverty Law Center has been tracking and fighting for decades.

The images from Wednesday’s coup attempt will be seared into people’s memories. Extremists stormed Capitol Hill and incited a riot that resulted in five deaths, including the killing of a Capitol Police officer who physically engaged with rioters as he attempted to secure the building. The mob of Trump’s supporters endangered the lives of thousands as they flew the Confederate flag – a symbol of racism and violence that did not even enter the halls of Congress during the Civil War. This attempted coup on our democracy comes as no surprise. White nationalist groups have been energized by Trump since he was a presidential candidate.

The weeks of planning that went into this attack underscore why organizations like the SPLC, which celebrates its 50th anniversary this year, remain critical in the fight against hate and extremism. We will remain vigilant in 2021, ensuring that the necessary actions are taken to put an end to this siege that Trump has both unveiled and advanced. 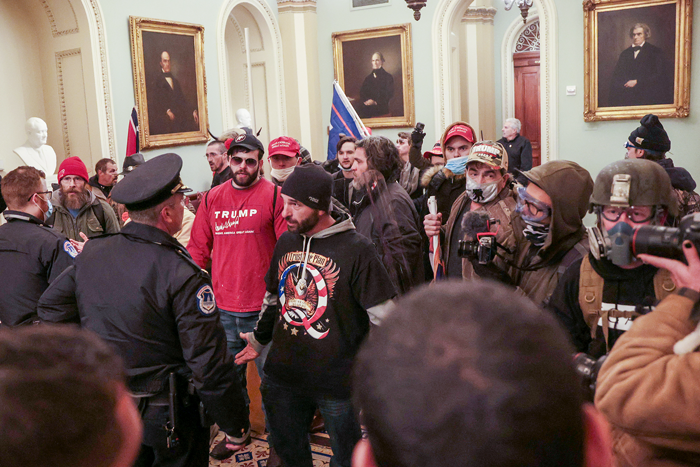 Supporters of President Trump confront police inside the U.S. Capitol on Jan. 06, 2021, in Washington, D.C. The siege temporarily interrupted a joint session of Congress that was called to ratify President-elect Joe Biden’s Electoral College win over Trump. Photo by Getty Images/Win McNamee

There is simply no way to overstate the gravity of what took place in the Capitol this week. While these extremists failed in their mission to prevent the counting of Electoral College votes, this attack can – and will – become a recruitment tool for white nationalist movements across the country and around the world.

This nationally coordinated coup attempt revealed highly organized networks of white supremacist organizations, extending beyond the Capitol and into statehouses around the U.S. that have been the target of protests. Unsurprisingly, statehouses in the South – a region with high populations of communities of color – have been particularly targeted.

These hate groups, emboldened by the president, pose a direct threat to the lives of millions of Black and Indigenous people, as well as other people of color around the country. They will not go away after President-elect Joe Biden’s inauguration.

In the face of hate, we must transform

We also must realize that the violence in Washington was predictable and preventable.

In 2019, the number of white nationalist groups identified by the SPLC rose for the second straight year, a 55% increase since 2017. Given the severity of the issue, in 2020, the SPLC published recommendations for confronting hate and threats to our democracy. There are a number of steps the federal government can take to combat white nationalism and its threat to our political systems, transform institutions that reflect dangerous ideologies and rebuild trust in our democracy.

Let us be clear: We are not powerless – but we must take swift and bold action immediately to prevent future attacks and ensure the safety of millions of vulnerable people. These recommendations must be prioritized in the first 100 days of the new administration to combat this threat:

Securing the daily lives of people during this pandemic is also important. These are dire, difficult times and hate groups can use financial uncertainty and other desperate situations to cast blame and recruit. In 2021, the SPLC will join coalitions advocating for pandemic unemployment benefits, health benefits and protections against evictions.

Building, organizing and mobilizing our communities

The last 12 months have greatly tested American institutions and our democracy. While the pandemic claimed hundreds of thousands of lives and brought to light the systemic racism embedded in every corner of our country, the Trump administration showcased its inability to unify the American public by failing to address long-standing disparities in health care, housing, education and the economy. During the summer, our country experienced civil unrest and demonstrations for the brutal killings of Floyd, Breonna Taylor, Tony McDade and others at the hands of police.

However, it was a year of great mobilization in our communities which resulted in the rejection of an administration that frequently promoted a white nationalist agenda. Black, Latinx, Asian and Indigenous people showed up in record numbers, demonstrating that democracy remained in the hands of the American people.

It was a movement that resulted in the historic election of Joe Biden and Kamala Harris – the first woman, Black person and Asian American to be elected vice president – as the team to move our country forward. And it was a movement that continued into 2021 with Georgia electing the Rev. Raphael Warnock, its first Black U.S. senator, and Jon Ossoff, its first Jewish senator. We now have a Senate that can work with the new administration to pass legislation that empowers our communities.

It is no coincidence that the Capitol Hill insurrection attacking our democracy happened on the same day that Congress was counting the Electoral College votes, certifying Biden’s legitimate win. But despite the "American carnage"  that Trump mentioned in his inaugural speech manifesting itself this week, our optimism must endure.  We have shown that our communities are strong when they work together. We must uplift and empower the narratives that showcase the power of our movement.

In the aftermath of this coup attempt, the Capitol building will be repaired, but it is up to all of us to build a nation in which all communities can thrive – a nation that lives up to its highest ideals of justice and equity. I can think of no better way to celebrate our 50th anniversary than by working closely with our supporters and allies to achieve that goal.