The youngest child of Dr. Martin Luther King Jr. playfully wrestled with another girl in high school and trapped her in a headlock.

The girl fought back. She scratched Bernice King’s face and pulled her hair. Bernice wanted to throw a punch, but her parents’ nonviolent training kicked in.

“Somebody has to cut off the chain of violence,” her mother, Coretta Scott King, would say, reflecting the nonviolent philosophy she and her husband had espoused together. 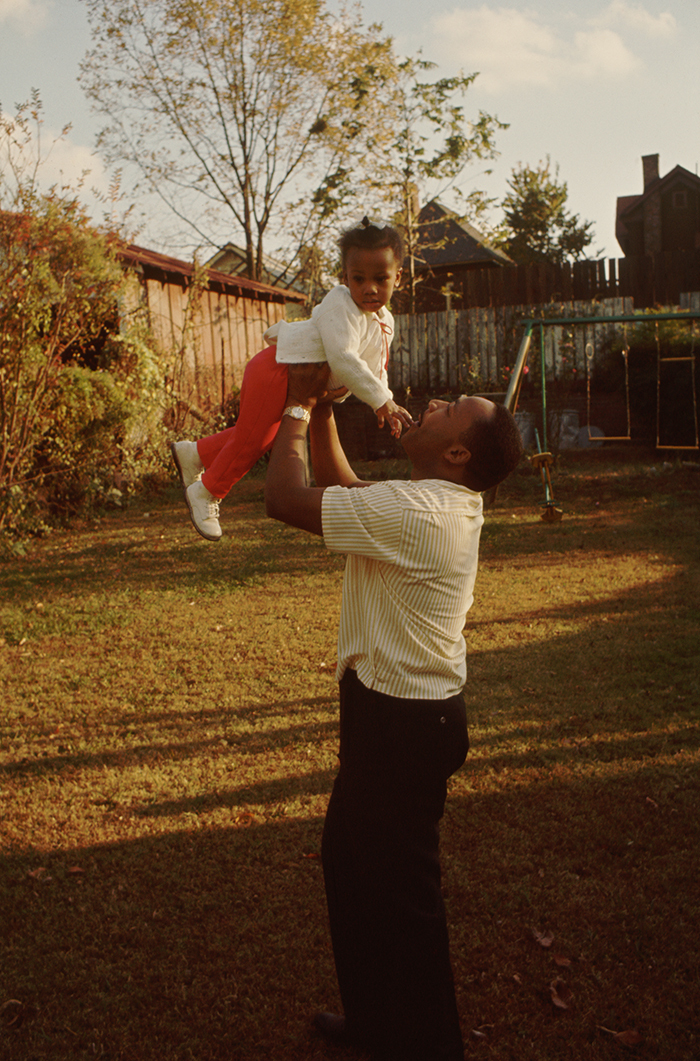 Dr. Martin Luther King Jr. lifts his daughter Bernice while playing with her in their back yard. (Photo by © Flip Schulke/CORBIS/Corbis via Getty Images)

“She said it so often that it prevented me from making a serious error as a teenager,” recalled Dr. Bernice A. King, whose father was assassinated on April 4, 1968, when she was only 5.

Today, Bernice King is CEO of The Martin Luther King, Jr. Center for Nonviolent Social Change – also known as The King Center – which is dedicated to educating, inspiring and empowering new generations to carry on King’s work.

That work is urgently needed.

“As we bear witness to the dangerous rhetoric from President Trump that encouraged white nationalists to violently attack the U.S. Capitol, leaving five people dead, we must fully embrace King’s message that ‘[n]onviolence is a powerful and just weapon, which cuts without wounding and ennobles the man who wields it. It is a sword that heals,’” said Tafeni English, director of the Civil Rights Memorial Center, which is operated by the SPLC and includes interpretive exhibits about civil rights martyrs. “Embracing King’s message of nonviolent social change is the best way to honor his legacy.”

On Friday, which would have been King’s 92nd birthday, the SPLC celebrated the civil rights icon’s legacy with an online panel discussion titled “The March Continues: Building Collective Power to Impact Policy and Dismantle Systems of Oppression in 2021 and Beyond.”

In an interview with the SPLC, Bernice King reflected on her father’s message of nonviolent social change and how it applies today, in light of the racial reckoning sparked by the police killings of Black people including George Floyd, Breonna Taylor, Tony McDade, Sean Reed, Yassin Mohamed, Ahmaud Arbery, Rayshard Brooks and so many others.

That message is clearly outlined in her father’s last book, Where Do We Go From Here: Chaos or Community?

“Although it was written in 1967, I believe it is a blueprint for us today on how to eradicate racial and economic injustice, while also advising us on the need for heart change,” King said. “In it, he shares that ‘the ultimate answer to the race issue will be when people obey the unenforceable.’”

This “heart change” and the need for higher consciousness will prevent people from hurting each other, even when there is no law in place to stop them.

“As my father said, ‘Morality cannot be legislated, but behavior can be regulated. Judicial decrees may not change the heart, but they can restrain the heartless,’” she said. “So we must have both heart change and legislative change.”

King would have supported the Movement for Black Lives, a coalition that includes Black Lives Matter, his daughter said.

“My father believed that every human being has value and should be treated with dignity,” she said. “He would certainly applaud the assertion that Black lives matter and the passion for aligning reality with the assertion.

“Black Lives Matter is saying, ‘Value my personhood. Treat me with respect. Equal respect.’ His teachings remind us that we must correct any system, policy or practice that refutes these statements. And, therefore, we must work diligently to perpetuate justice at its best, which he defined as ‘love correcting everything that stands against love.’”

Her mother taught what her father called the “beloved community,” in which caring and compassion drive policies that support the worldwide elimination of poverty and hunger, and all forms of bigotry and violence.

“With all of this in mind, I believe that my father would not only support those working on behalf of the liberation and empowerment of Black lives but would also seek to foster understanding of nonviolence and attention to the beloved community, not only for participants in the movement, but for those who so vehemently oppose BLM, as well.”

The country would not be as focused today on racial injustice, such as police brutality, she said, if not for the energy, commitment and work of Black Lives Matter activists and organizers.

“Whenever I speak about Black Lives Matter or have an opportunity to communicate with BLM leaders personally, I often encourage them to consider my father’s quote in their movement – our ‘nettlesome task’ is to ‘discover how to organize our strength into compelling power so that the government cannot elude our demands,’” she said.

“It is my hope that, as we continue the fight for racial justice, the movement around Black lives will grab hold of these words and reflect a more defined and unified agenda with a fine-tuned strategy for achieving that agenda.”

Bernice King does her best to follow the teachings and examples of both parents. When her mother passed away in 2006, she began to recognize her responsibility to carry forth not just her father’s but also her mother’s legacy.

Coretta Scott King was a prominent civil rights activist in her own right. She was more politically active than her husband when the two first met, and her support of the Montgomery Bus Boycott did not waver – even after her house was bombed by white supremacists with her and her 10-week-old baby Yolanda inside. The two were not harmed.

“Not only did I start noticing commonalities in gestures, I also undertook a serious journey to understanding nonviolence at a greater level, eventually committing to it as a way of life, as they were committed,” King said. “Indeed, I am my parents’ child.”

Just the other day, she said, her commitment to nonviolent social change surfaced when someone asked her about the legacy she inherited.

“Trying to create my own legacy is unnecessary because the legacy that I inherited must be advanced and built upon,” she said. “Being a bearer of this legacy requires faithful stewardship and a great deal of energy, effort and focus. This legacy includes nonviolence, being and emulating love, showcasing forgiveness and speaking up for the ‘least of these’ and the left out. I can’t deny that legacy. Why wouldn’t I embrace it?”

Unlike her siblings – Dexter King, the late Yolanda King and Martin Luther King III – Bernice is the only one who followed in her father’s footsteps by taking up the ministry as a profession.

Like her father, who became a minister at 19 after giving a trial sermon at Ebenezer Baptist Church in Atlanta, she was called to the ministry at 17. 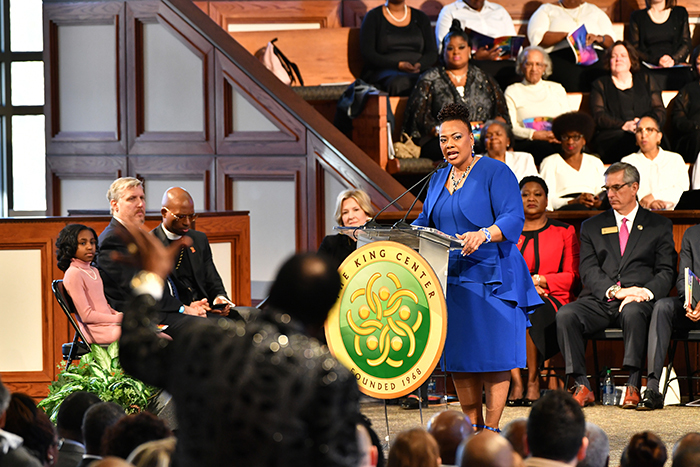 After graduating from Spelman College with a bachelor’s degree in psychology, she earned a law degree and Master of Divinity degree from Emory University. In 1988, she delivered her first sermon at Ebenezer, where her father and grandfather had preached.

Drawing on her legal background, she helps young people, particularly those who are in trouble. Although she has spoken out against war in the Persian Gulf and addressed sexism in churches, her approach is more of a personal, intimate ministry than a social, political gospel.

Like her father, she believes that the church plays an important role in responding to racism and poverty, just as the Dexter Avenue King Memorial Baptist Church – which her father pastored – played a key role as an organizing center for the Montgomery Bus Boycott that sparked the modern civil rights movement.

But at the same time, she said, the Christian church as a whole must address its history as an accomplice in the structural racism of American society.

Quoting her father, she said, “The church, by and large, sanctioned slavery and surrounded it with the halo of moral respectability. It also cast the mantle of its sanctity over the system of segregation.”

Today’s church, she said, “must take the lead in social transformation and in eradicating racism, poverty (and the third evil of the Triple Evils that my father often mentioned, which is militarism); and commit to doing justice, loving mercy and walking humbly with our God.”

King also shared her thoughts about where the movement should go next, hoping for more coordination among groups seeking social change around a unified agenda. That would help the movement focus more sharply on achieving racial and economic justice and equity, she said.

“There is so much great, needed work happening and I believe that joining the work together where we can, and utilizing coalition building, will help us advance the cause of justice/equity significantly,” she said. “And of course, I recommend commitment to nonviolence as the way to effectuate systemic change and create new policies, practices and behaviors.”

‘Conscience tells him it is right’

Her father made many statements that continue to inspire her, including that he had decided to stick with love because, as he said, “Hate is too great a burden to bear.”

Coretta Scott King would often remind Bernice and her siblings about that quote and another one: “If a man has not discovered something that he will die for, he isn’t fit to live.”

But this one inspires her the most, and she repeats it most often: “There comes a time when one must take a position that is neither safe, nor politic, nor popular, but he must take it because conscience tells him it is right.”

Photo illustration at top by SPLC.