In 2020, a year marked by political and social turmoil, the repugnant messages spewed by hate groups across the U.S. only proliferated. Fueled in part by a presidential administration steeped in racism and misogyny, the number of racist flyering incidents in 2020 grew to well over 4,000.

Used as a tool for recruitment, publicity and intimidation, flyering is a relatively low-risk, contactless activity during a pandemic, therefore contributing to the rise in incidents. Most often, those posting flyers or hanging banners wear masks to conceal their identities. Thus, the only revision to this tactic in 2020 was a focus on public spaces rather than on campuses, as many academic institutions moved to online learning. The number of campus flyering incidents dropped from 530 in 2019 to about 250 in 2020. 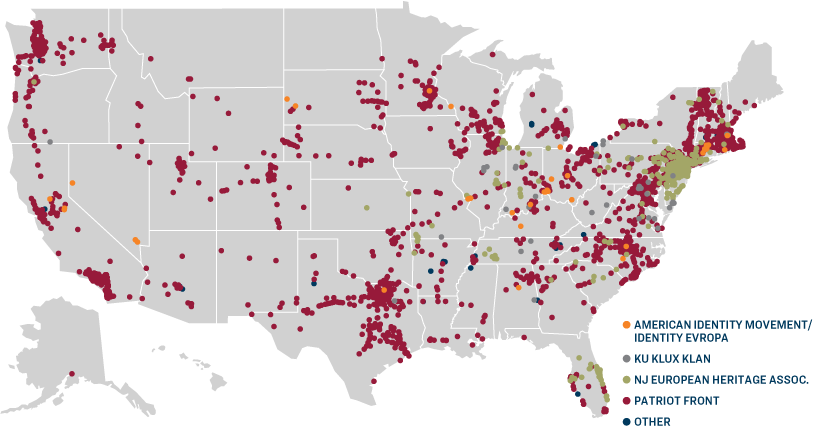 With regards to groups and ideologies that carried out the bulk of flyering, trends remained largely the same across 2019 and 2020. White nationalist groups disseminated the most flyers, banners and stickers across the country. Amongst groups under that ideology, Patriot Front was again by far the most active, with over 3,500 incidents. These incidents include posting flyers and stickers in public places, attaching banners to highway overpasses, and spray-painting racist and antisemitic messages. Among the more notable actions in 2020, Patriot Front dropped a banner reading: “The United States is no longer of America. Now we are on our own,” over a Black Lives Matter billboard in Houston, Texas.

Also continuing on the same trajectory from 2019, the number of flyering incidents attributed to the American Identity Movement continued to drop significantly until the group’s leader announced their disbandment on Nov. 2. However, having increased their flyering efforts in June 2019, white nationalist group New Jersey European Heritage Association continued to regularly post flyers up and down the Eastern Seaboard in 2020. Posting roughly 630 flyers and banners throughout the year, most efforts were concentrated in New York, New Jersey, Pennsylvania and Florida, with occasional postings in the Carolinas, Tennessee and Kansas.

Outside of the white nationalist ideology, several newly formed neo-Nazi groups utilized the tactic to recruit and spread their odious messages. Most notably, Nationalist Social Club (NSC 131) distributed flyers over 130 times in states across the country, including Massachusetts, New York, Arkansas and New Hampshire. Other recently formed neo-Nazi groups partaking in racist flyering during 2020 include Moonkrieg Division, Iron Youth, Folks Front/Folkish Resistence Movement and 14First. Since each flyering incident compiled on this map denotes real-world activity from members of organized hate groups, this map is largely a reflection of where each of these hate groups are currently located.

Most of the aforementioned groups across the white nationalist and neo-Nazi ideologies post about their flyering endeavors on such platforms as Telegram and Gab, where racist rhetoric flourishes completely unfettered. As various social and political events transpired throughout the year, the messaging – both in print and on social media – changed accordingly. In mid-February, when reports of the coronavirus were initially surfacing, the American Identity Movement posted flyers emulating President Trump’s xenophobic, anti-immigrant rhetoric about the virus.

This year’s Ku Klux Klan flyering numbers were nearly identical to last year’s, with an estimated 42 incidents. Of those, roughly two-thirds can be attributed to the Pelham, North Carolina-based Loyal White Knights, who left flyers in driveways across several states in the Mid-Atlantic region. Other groups that dropped flyers in 2020 include the Honorable Sacred Knights, Knights of the Ku Klux Klan, Imperial Klans of America and Church of the National Knights.

While the climate across the country remains tempestuous, flyering will continue to be a staple of far-right recruitment and propagation. The impact of the Biden-Harris administration on flyering is unforeseeable, as is the impact the vaccine will have on its popularity as a tactic. Despite the increasing number of hateful flyering incidents in 2020 and the uncertainty of flyering in 2021, the resiliency of communities across the country has remained steadfast in the face of racism.