2020 was pivotal in the spread of the antigovernment movement, galvanized by the coronavirus pandemic, Black Lives Matter protests against police violence and the 2020 presidential elections. The perfect storm of events not only fueled the movement, but also increased the potential for violence as disinformation spread mostly unchecked across social media platforms. In this report, we will explore in three parts the events that fueled the feverish antigovernment activity of 2020.

Late summer’s crackdowns on Facebook and Twitter drove many in the antigovernment universe to more permissive platforms where participants continued to spread unchecked conspiracy theories, planned events and shared violent threats against public officials. So though there may be a slight drop in the numbers of organized antigovernment groups this year, shared beliefs created larger, looser movements such as the boogaloo and QAnon movements, whose supporters often appeared side-by-side with more organized groups. The antigovernment movement thus became more flexible and more metastatic.

Public health lockdowns and restrictions on gatherings and mask mandates drove antigovernment groups to massive protests at state capitols in 2020, and led to a plot in Michigan to kidnap the governor. (The militia group also plotted to do the same to the Virginia governor). BLM protests also drove antigovernment groups to counterprotest, as they painted BLM and supporters across social media with racist dog whistles such as “thugs” and blamed violence on leftists. The 2020 presidential elections also provided fertile ground for dangerous conspiracy theories about voter fraud, which evolved into mass movements of right-wing activists upset about the legitimate election of Joe Biden.

After the election, another movement galvanized antigovernment forces that wanted to “stop the steal” as they pushed the conspiracy theory that Joe Biden and Democrats had somehow stolen the election from outgoing President Donald Trump. The falsehood was spread by Trump himself and Republican lawmakers such as Missouri Sen. Josh Hawley and Texas Sen. Ted Cruz, who challenged the Electoral College certification on Jan. 6.

The waves of disinformation across the antigovernment movement culminated in horrific violence as thousands of Trump supporters converged on the U.S. Capitol building in Washington, D.C., on Jan. 6, egged on by President Trump at a rally near the building. Hundreds forced their way into the Capitol in a domestic terror assault that security and law enforcement were clearly unprepared for, while Congress met to confirm electoral ballots for President-elect Joe Biden and Vice President-elect Kamala Harris.

The attack included groups and individuals from across the right-wing extremist spectrum, including antigovernment groups such as Oath Keepers, white nationalists such as Nick Fuentes and Tim “Baked Alaska” Gionet, QAnon adherents and members of the hate group the Proud Boys. Those who broke into the Capitol ransacked offices, vandalized and stole furniture, and allegedly stole documents and electronic devices. At least one individual dressed in paramilitary garb was photographed carrying zip ties into the Senate and House chambers. Dozens were injured and five people died, including a Capitol police officer who was beaten by protesters, and a QAnon supporter who was shot by law enforcement.

Against this backdrop, the movement enters a new year, and with Trump no longer president, the movement could continue to grow, feeding off conspiracies and resentment against President Biden and enabled by platforms that allow such rhetoric to flourish.

The coronavirus pandemic ignited activity by antigovernment groups in 2020 as many resisted stay-at-home orders and requests to wear masks. This included militias, constitutional sheriffs, conspiracy theorists, antigovernment secessionists and members of boogaloo and QAnon movements.

Many groups have denied the virus’s existence or severity, reacting by spreading baseless conspiracy theories, claiming government health guidelines were tyrannical and calling lawmakers who implemented them tyrants. Constitutional sheriffs across the country refused to enforce stay-at-home orders, claiming they were “unconstitutional” mandates while antigovernment groups cheered them on.

As stay-at-home orders were implemented to slow the spread of the virus, antigovernment groups took to the streets to protest, claiming their liberties were being infringed upon. Law enforcement has arrested members of at least two groups on various charges including bombing and kidnapping, based on actions they took in opposition to the state’s coronavirus response.

On April 12, Ammon Bundy, known for coordinating standoffs against the U.S. government in Nevada in 2014 and Oregon in 2016, hosted an Easter Service on his property in Emmett, Idaho, that protested and defied the state’s stay-at-home orders. A makeshift sign stood in front of the pulpit that read, “Defy martial law.”

Bundy’s group, People’s Rights, has hosted dozens of events to protest coronavirus restrictions, including events at government buildings in Idaho, at government workers’ homes in Washington state, and in Montana, where they threatened citizen’s arrest of those enforcing coronavirus policy.

The Nevada Caravan Protest of Government Overreach was also held April 12 in Las Vegas and was promoted by Eagle Forum Nevada. This was the first of many reopen protests held in Carson City, Reno and Las Vegas, Nevada.

Other extremists at protests include the Proud Boys at an April 18 protest in Las Vegas, the Lightfoot Militia at a May 2 protest in Carson City, a crew of armed “boogaloo boys” at an event in early April and “boogaloo boy” Cody Cunningham hosting a May reopen rally in Las Vegas. The same group would later be arrested and charged for plotting to firebomb a power substation during a May 30 Black Lives Matter protest. According to the criminal complaint, they wanted to see a violent overthrow of the government and their goal was to induce confrontation between police and protesters to provoke it. They intended to execute the first phase at a May 16 reopen protest, setting off fireworks, smoke bombs or noise makers to create a public panic, but called it off on May 13.

Another protest was Operation Gridlock, on April 15, in Lansing, Michigan. Cars jammed the roads around the state Capitol to oppose stay-at-home orders. According to police estimates, 3,000 to 4,000 people attended. Proud Boys and the Michigan Liberty Militia were present.

One day later, a protest was held at the Texas Governor’s Mansion in Austin. The event’s Facebook page stated, “We want to reopen Texas businesses and we want to hold our government officials accountable for infringing upon our rights as American citizens.” The Texas Freedom Force militia was present, along with Owen Shroyer of Infowars, a conspiracy propagandist site. A day prior, Shroyer questioned the severity of the pandemic and alleged that the death toll from the coronavirus was Chinese propaganda. 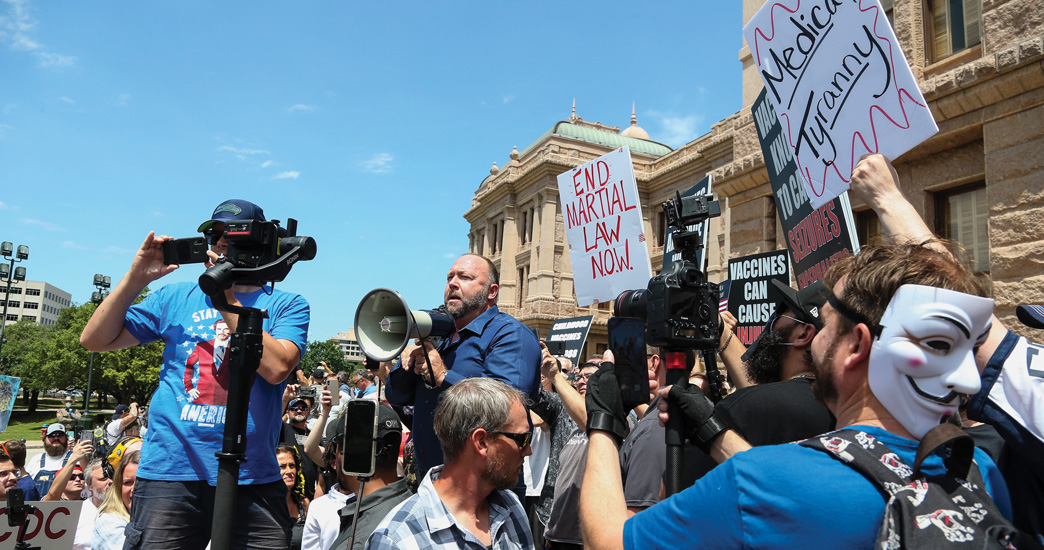 Shroyer held his own rally in Austin on April 18, defying the state’s coronavirus restrictions. On June 28, the day Travis County had its largest spike in coronavirus cases up till that time, Infowars founder Alex Jones hosted an Austin anti-mask rally with Shroyer. At the event, they claimed mask mandates were illegal orders and equated them with slavery. “We’re going to tell the globalists, ‘We’re not your slaves, we’re not in your cult, and if you want war, you better believe you got war,’” Alex Jones yelled from a bullhorn.

Oath Keepers also were active in opposing and defying coronavirus guidelines in Texas. Leader Stewart Rhodes spoke at a rally in Palestine, Texas on May 16, and Texas Oath Keepers hosted a rally in Austin, Texas on May 23. They were involved in one of six incidents in Texas where armed individuals sought to “protect” businesses that reopened during the lockdown. On May 30, their Texan Spartan group put out a call to action, saying Dallas salon owner Shelley Luther had authorized them to provide security for her property. They invited members, encouraging them to open carry rifles. 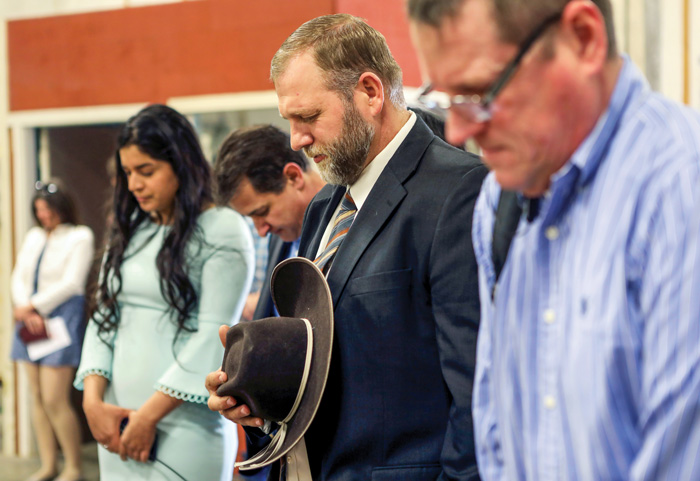 On the same day, Oath Keepers hosted a rally in Newburgh, New York, for a member’s business that was reopening against state guidelines. They invited “Oath Keepers, three percenters and patriots” to come to the tattoo shop of Robert Minuta. The invite, signed by Rhodes, claimed Minuta was the first business owner to defy the New York governor, and called the event “a display of defiance against a tyrannical dictator.”

Across the country, protesters referred to their governors as dictators, kings and tyrants for imposing coronavirus restrictions. Arguably, no one was more villainized than Michigan’s governor, Gretchen Whitmer, for whom, as CNN noted, Trump reserved his harshest rhetoric. On April 17, Trump tweeted, in all caps, the words “LIBERATE MICHIGAN.” 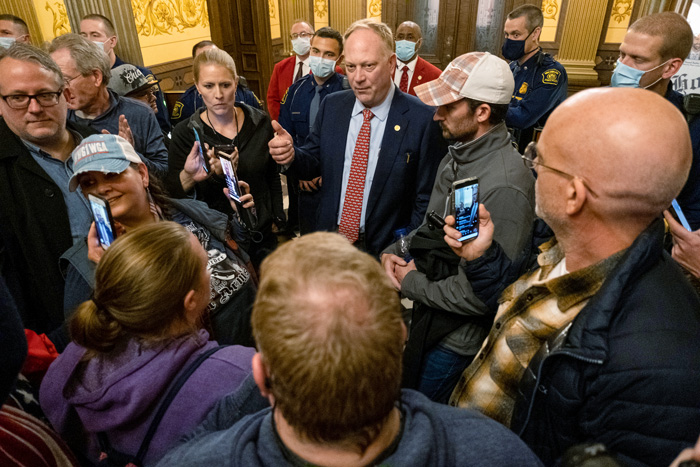 On the same day, armed protesters stormed the statehouse where legislators were meeting to discuss extending the state’s stay-at-home orders, intimidating lawmakers. State Sen. Dayna Polehanki, a Democrat who represents the 7th District, posted a tweet from the Michigan State House with a photo, writing: “Directly above me, men with rifles yelling at us. Some of my colleagues who own bullet proof vests are wearing them.”

Two of the men in Polehanki’s photo were Michael and William Null, members of the Wolverine Watchmen militia who were charged on Oct. 8 with providing material support for terrorism. Enraged with Michigan’s coronavirus restrictions, the group and additional individuals conspired to kidnap Gov. Whitmer. Some also discussed kidnapping Virginia’s governor Ralph Northam and burning down the Michigan State House or invading it to “take hostages, execute tyrants, and have it televised.”

The day the men were charged, Sen. Polehanki spoke on the floor of the Michigan State Senate, telling her colleagues:

Men armed to the teeth stormed our chambers to intimidate us. Today we found out that these threats were real. There was a plan in place to not only scare us, but to kidnap us and kill us.

We literally dodged death this time. But what about next time? We may not get a second chance like we have today.

Although not all antigovernment activity related to the coronavirus has been violent, Polehanki’s words speak to the potential for violence when these groups become angry and agitated. Unfortunately, the lesson learned in Lansing did not prevent an insurrection from unfolding at the U.S. Capitol on Jan. 6 of this year.

Groups who did not plot acts of terrorism still took part in activities dangerous to themselves and others by spreading conspiracies and misinformation about the virus and its transmission, downplaying the pandemic’s severity and disregarding public health guidelines designed to keep people safe. Many antigovernment extremists attended large events, maskless, including stay-at-home protests where they often created an atmosphere of fear by carrying weapons, rallying outside homes and forcing their way into government buildings, all in an attempt to defy the government and its policies.