Far-right extremists and white supremacist terrorists have embraced Telegram as their platform of choice, signaling a shift away from these groups’ traditional methods of organizing and toward a dangerous future defined by leaderless resistance and “lone actor” terrorism.

Telegram, a messaging app, is a haven for neo-Nazis, white nationalists and antigovernment extremists locked out of traditional social media sites, as Hatewatch first reported in mid-2019.

But 2020 presented a year full of new hurdles for in-person organizing for the movement, ranging from legal quagmires to the COVID-19 pandemic. As a result, extremists have come to rely less on in-person groups, such as those recorded in the Southern Poverty Law Center’s annual hate count, and more on diffuse, leaderless digital networks, such as those facilitated by Telegram. While this shift does indicate that extremists are using new strategies for organizing, it does not signal a decrease in the threat those extremists pose in the United States and around the world.

“If [a group has] got a logo, a name, and an online presence, that’s three strikes, run for your life,” wrote one moderator of a prominent white supremacist accelerationist channel in a guide, distributed on Telegram, for organizing white supremacist terror cells. 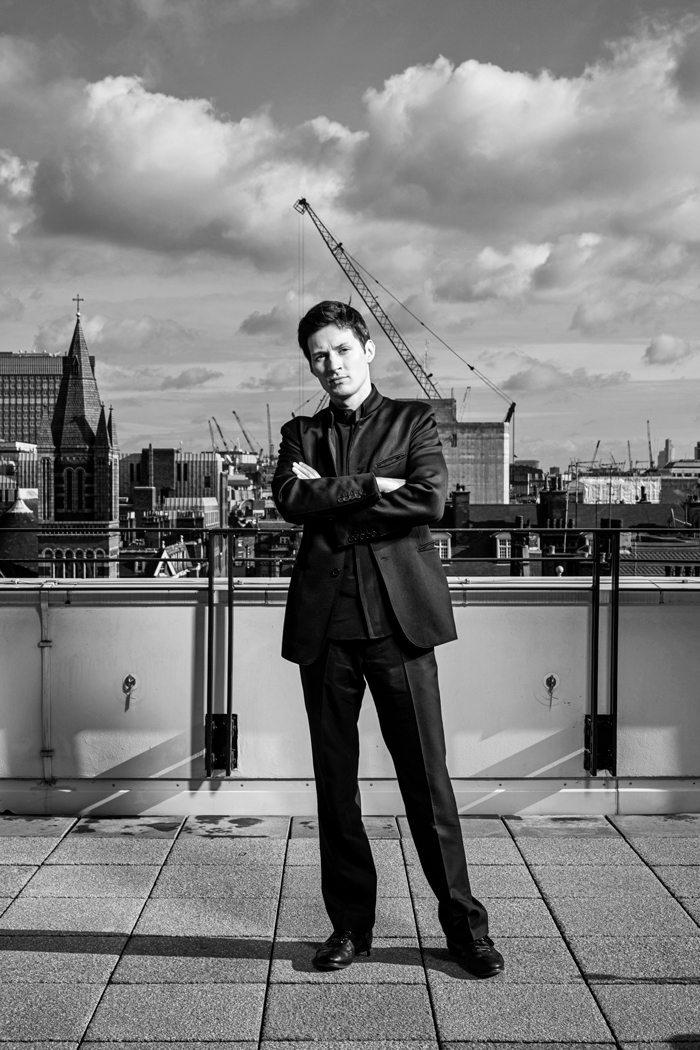 Pavel Durov, considered by some to be “Russia’s Mark Zuckerberg,” founded Telegram in 2014. Its appeal to extremists is twofold. First, the platform’s technical features make it especially effective for spreading propaganda. As on Twitter or Facebook, an individual user or group can start an account – known as a “channel” on Telegram – that allows them to post messages, pictures, videos, customizable “stickers” and other files for their followers. Messages and digital media can also be “forwarded” or shared between channels on Telegram, increasing the audience for hate content.

The file storage feature in particular is leveraged on Telegram to store and share massive libraries of multimedia propaganda. These may include images and videos dedicated to white supremacist terrorism and encouraging violence against religious and ethnic minorities, guides for 3D printed weaponry, white supremacist literature, hate music and more. These same channels have also provided a space for livestreams of white supremacist terrorists, including the perpetrators of the 2019 terrorist attacks in Christchurch, New Zealand, and Halle, Germany, engaged in acts of mass murder. Telegram’s lax enforcement policies have allowed these videos to proliferate long after they were purged from other parts of the internet.

In addition to enabling the spread of propaganda, Telegram’s built-in features also facilitate recruitment by making it easy for extremists to set up public or private encrypted discussion groups. (Encryption refers to the process of scrambling data so that messages cannot be read by anyone other than the sender and recipient.) In these chat groups, potential recruits can mingle with organizers of a group, talk with other members, learn the culture of the group and gain access to media deemed too sensitive for the public-facing propaganda channels. Many channel administrators have also leveraged Telegram “bots” to support vetting requirements and to automatically erase content from the channel, thus reducing the likelihood that a channel is infiltrated or that its contents are copied. Telegram’s “secret chat” feature allows for a private conversation between two users.

Increasingly, Telegram chats consist of individual extremists who are not members of any group sharing hate content and discussing plans with one another.

In late 2019, Telegram, in partnership with European law enforcement, launched a systematic effort to boot the international terrorist organization that calls itself the Islamic State (also known as ISIS or Daesh), and related networks from its platform. 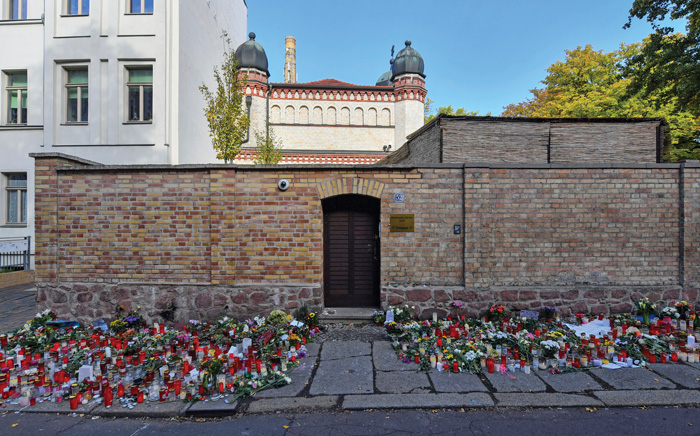 Makeshift memorial at the site of the 2019 mass shooting in Halle, Germany. Despite terms of use that forbid promoting violence, attacks such as these are commonly celebrated in some spaces of Telegram, with little moderation or oversight.

As a Europol press release announced in November 2019, this move took place alongside an expanded reporting mechanism that would allow users to “refer and classify the content they find inappropriate and violent” for the app’s moderators to review. From there, channels could be removed or banned from the platform entirely, or simply quarantined. In the latter case, they would be inaccessible to users accessing the app on particular devices, such as iPhones, while still available on others, such as desktop computers. 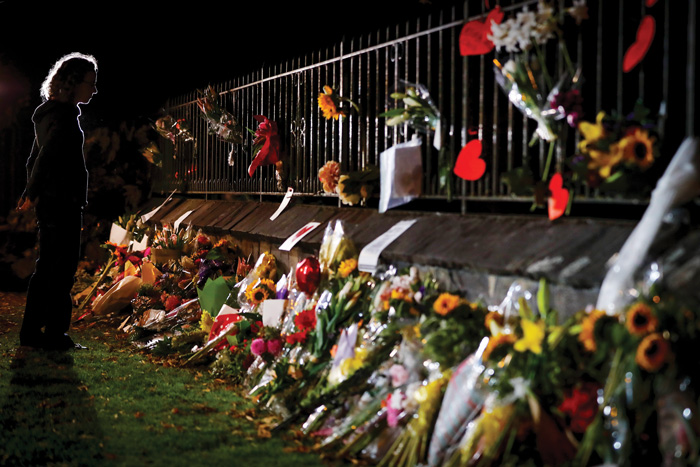 Makeshift memorial at the site of the 2019 mass shooting in Christchurch, New Zealand. Despite terms of use that forbid promoting violence, attacks such as these are commonly celebrated in some spaces of Telegram, with little moderation or oversight.

However, a 2020 review conducted by a handful of academics of nearly 28,000 channels reveals that these enforcement mechanisms have done little to prevent the spread of violent content. Rather, according to an analysis of 498 channels that had been restricted in some capacity for terms of service violations, a mere 58 were quarantined due to violent content. Instead, channels were more frequently limited on iOS, Android and Microsoft devices because they showed pornographic content (344 channels) and engaged in copyright infringement (96 channels).

To limit access to channels on specific devices, platforms such as the Apple Store – where users would download the Telegram app for devices such as an iPhone or iPad – look for flags that label an individual channel as “restricted.” This snippet of code would make a channel and its content that had been forwarded elsewhere on Telegram not visible to a user on that particular device. Users of Apple's iOS, for example, who try to view a restricted channel would instead be presented with an error message telling them that the material violated the Apple Store’s prohibition on “objectionable content,” which includes a section on “defamatory, discriminatory, or mean-spirited content.”

Among many of the channels restricted in this manner for violent content are an array of networks associated with white supremacist accelerationism – an increasingly popular strategy on the extreme right that contends modern society is irredeemable and offers up an apocalyptic race war as a solution. At least one channel had been restricted just a few months before its moderator, 21-year-old Luke Hunter, was charged in the United Kingdom for alleged supporting Feuerkrieg Division, an international neo-Nazi terror group. Hunter’s association with the group was far from subtle; on Oct. 1, 2019, he reposted a Feuerkrieg Division propaganda video to his Telegram channel with the caption: “Edited by yours truly.”

But these device-based restrictions had little to no effect on the membership of many channels. In fact, an analysis conducted by the Southern Poverty Law Center of 36 far-right channels that had been restricted for violence revealed that 21 of them continued to attract followers at a median growth rate of 43.63% between 2019 and the end of 2020. Most of them continued to promote white supremacist terrorism and accelerationism even after being “quarantined” by Telegram and the app stores. One channel associated with the Nationalsozialistische Deutsche Arbeiterpartei International – a nod to the official title of Hitler’s Nazi Party – grew at a rate of 2,031.87% after being “restricted” by Telegram, boosting their followers from 775 in 2019 to 16,522 in 2020.

In other cases, administrators chose to abandon their prior restricted channels and simply create a new, unrestricted channel using a new name. One such channel, run by former Republican congressional candidate and white supremacist accelerationist Paul Nehlen, grew over 150% between 2019 and 2020 after being rebooted under a similar name.

Telegram could ban these channels, as it did to those operated by ISIS and its supporters. Indeed, the Telegram terms of service, as of December 2020, states that in registering an account you agree not to “promote violence on publicly viewable Telegram channels, bots, etc.” It simply, for whatever reason, chooses not to enforce this clause when it comes to right-wing terrorism.

How Telegram’s popularity has reshaped the white power movement

Telegram’s favorability among right-wing extremists has gone hand-in-hand with the growth of accelerationism. As the “alt-right” seized the spotlight in the early Trump era, accelerationism flourished in niche internet communities and forums, such as Iron March. Today, Telegram has enabled this accelerationist influence to reach the mainstream white power movement.

Nowhere is this fact more evident than a network of neo-Nazi accelerationist channels known as “Terrorgram.”

This network, which fuses the glorification of political violence with a distinctive hyper-stylized visual aesthetic, consists of a small network of channels that share memes glorifying an apocalyptic race war, instructions for 3D-printing weapons, extremist literature and manifestos, and video recordings of white supremacist terror attacks that have been removed from other platforms. Many of these channels came into existence in 2019, and by 2020 all of them had grown their subscriber counts from the double- or triple-digits into the thousands. The data was collected from Telegram’s own internal systems by accessing its application programming interface (API), which provides a window into the application’s data layer and is designed for developers to access.

Three channels identified by the Southern Poverty Law Center as part of the Terrorgram network were created as late as spring and summer of 2020, and by the end of the year had collectively acquired over 16,100 followers. One of these three channels, which originated in February 2020, focused specifically on tying extremist messaging to the COVID-19 pandemic. 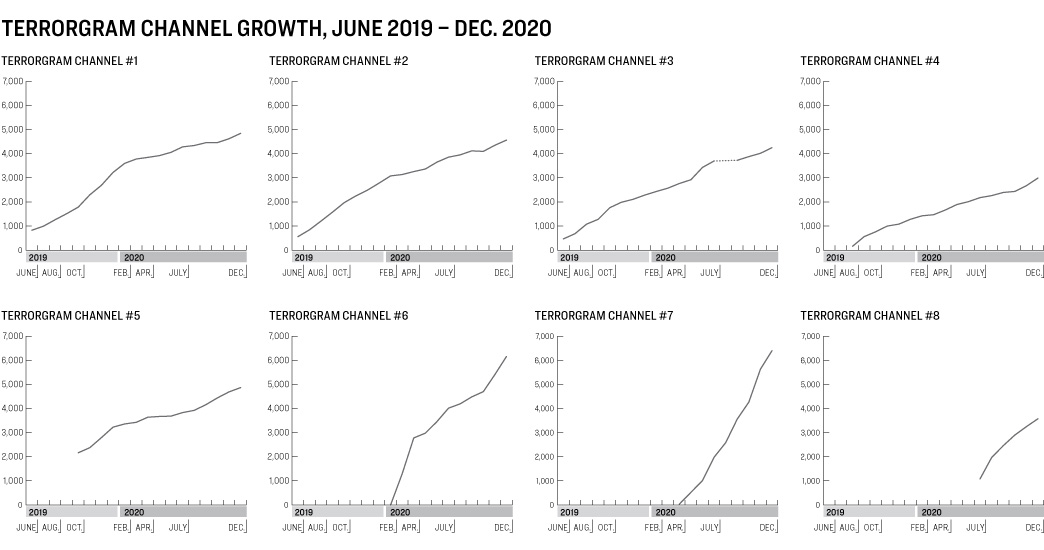 Many of the Terrorgram channels experienced triple-digit growth throughout 2020 despite previously being banned from the platform or being restricted on some devices. One channel at the heart of the network, which is one of the few neo-Nazi channels that been banned from Telegram on a few occasions, has garnered nearly 3,000 followers since it was newly created on Oct. 9, 2020.

These Terrorgram channels epitomize what the U.K.-based Institute for Strategic Dialogue (ISD) has referred to as a “post-organisational paradigm.” ISD researchers Jakob Guhl and Jacob Davey describe a new way of organizing in which an “online connection to extremist culture and ideology could be equally important for inspiring violence as connections to ‘on the ground’ groups.”

We already are seeing this paradigm play out on the ground. Both reporters and antifascist activists observed a handful of extremists tied to neo-Nazi Telegram channels appearing at racial justice protests throughout the country. One Ohio National Guardsman took to Telegram chats to express his enthusiasm about being deployed to Washington, D.C., in early June, according to reporting from Right Wing Watch and Unicorn Riot. Extremists on the platform have also used it to organize other real-world activities once traditionally considered the domain of groups, such as distributing downloadable propaganda and instructions for how and when to post flyers and banners.

Telegram presents other challenges to the white power movement’s traditional mode of organizing. The platform makes promoting visual propaganda simple, and users are bombarded with an almost endless wall of neo-Nazi imagery when they log on. There are no requirements for membership to public channels, as well as many chats, which makes joining easy. Additionally, anyone with access to image editing software can create and broadcast their own extremist propaganda. As the white power movement increasingly shifts to organizing online, these aspects of the platform will prove to be crucial.

Durov, Telegram’s founder, was once asked by WIRED about his plans for finding a new headquarters for the company after his self-imposed exile from his native Russia. Durov explained that he was searching for “a country that will allow us to develop our projects with privacy and freedom of speech in mind.” He went on to add, “We like freedoms, strong judicial systems, small governments, free markets, neutrality and civil rights.”

With Telegram still the leading platform for fomenting terroristic violence, albeit now on the far right, it is worth pondering whose civil rights Durov is aiming to protect.