The grandmothers are tired.

Desperate for a way to earn a living after she was released, Singleton at one point started clipping coupons, buying body wash, shampoo, clothing detergent, anything she could find deals on, and reselling them at flea markets. These days she and McCoy work concession stands part-time at TIAA Bank Field in Jacksonville, Florida. But that work dries up when football season ends. Both find comfort in prayer, in helping their community and in trying to give their people a political voice.

But despite all the scraping and praying, the debt is still there. Fees, fines and restitution. That’s what the government calls the yoke that silences both women’s voices by denying them the right to vote. Singleton owes at least $15,000 by now. McCoy owes $7,000. And the interest on the debt keeps building, the yoke growing heavier every day.

No wonder they are tired. They are low-income Black women convicted of felonies. They long ago completed their sentences for the first crimes they ever committed. But Florida wants to make it virtually impossible for them to cast a ballot ever again.

“It’s life or death,” McCoy said of what voting means to her. “People like me, we have a better understanding of the issues, the problems people are going through, what keeps people down. If people like me don’t vote, when people get into office they don’t hear us, they don’t hear our concerns and our issues. They can close their eyes to the truth.” 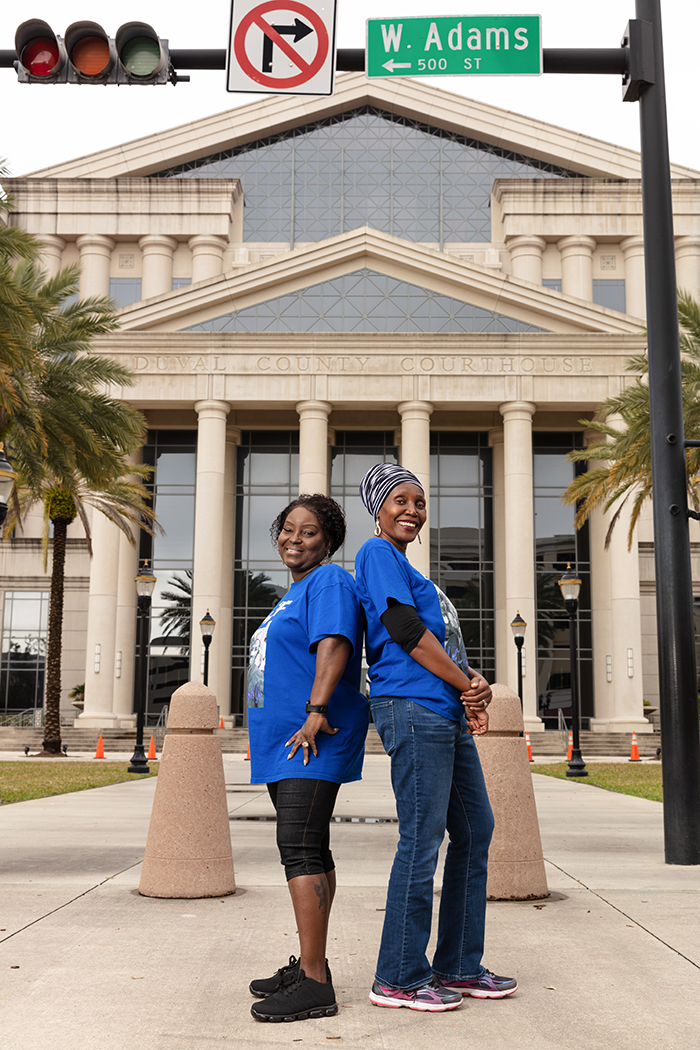 McCoy and Singleton, represented by the Southern Poverty Law Center, are plaintiffs in a lawsuit, McCoy, et al. vs. DeSantis, et al., which argues that tying the right to vote for women with felony convictions to the ability to pay back fines, fees and other legal financial obligations is a violation of the women’s constitutional rights, including their right to vote under the 19th Amendment.

“For women struggling to make livable wages after incarceration, voting is simply no longer an option,” said Nancy Abudu, who as SPLC’s deputy legal director for voting rights leads the team that brought the lawsuit.

“It’s generally known that women still get paid less than men, that people of color get paid less than white folks and that poor people in our country have a hard time satisfying financial obligations,” Abudu said. “And our clients satisfy all three of these categories, so it should be understood that this law is essentially equivalent to them never being able to vote again.”

Back in November 2018, it seemed that felony disenfranchisement would be an injustice Florida had left in its past. That’s when a ballot measure to amend the state constitution to end this practice won at the ballot box. Supported by two-thirds of Florida voters, Amendment 4 restored the right to vote to an estimated 1.4 million people.

McCoy, Singleton and many others like them had lobbied for the amendment and collected signatures to get it on the ballot. When it became law, they rejoiced. At last, it appeared, more than one in five Black people of voting age in Florida who had been denied the right to vote because they had been convicted of felonies would be able to cast ballots. It was the largest single expansion of voting rights since the Voting Rights Act of 1965.

But it wasn’t long before the Republican-controlled Florida Legislature slammed the door on the hopes of people like McCoy and Singleton. Six months after Florida voters cast their ballots for Amendment 4, the Legislature passed Senate Bill 7066, requiring people who have been convicted of felonies to pay all financial obligations related to their convictions before they could vote. On June 28, 2019, Republican Gov. Ron DeSantis signed it into law.

‘Too broke to vote’

The new law snatched away the historic voting rights victory and plunged the SPLC and other civil rights organizations into a series of legal battles on behalf of people who have been formerly convicted of felonies in Florida and have been denied the right to vote. The current lawsuit argues that since nearly a quarter of all Black women in Florida live below the poverty line, and since the unemployment rate for Black women in Florida is more than 43%, the restitution law renders it difficult if not impossible for them to satisfy the registration requirement.

The suit was dismissed by a district court and initially rejected by the United States Court of Appeals for the Eleventh Circuit. In a new brief filed in February, the SPLC asks the appeals court to reevaluate the impact of the law. The brief argues that the law places a severe burden on ballot access that women – particularly women of color – have, even when they are compared to other people with felony convictions.

“Plaintiffs meet every voting qualification except one,” the brief reads. “They are too broke to vote.”

The SPLC argues that the law is a Jim Crow-era poll tax that conditions the right to vote on the ability to pay fines, fees and restitution, and that it particularly affects women of color.

“The landscape of opportunity for women of color is frankly not great, so the application of this law, we argue, harms them more than others,” Abudu said. “All of these barriers already exist for them to survive and now, by completely eliminating their right to vote, you have silenced them politically.”

While the lawyers battle in the courts, Singleton and McCoy are doing everything they can to avoid being silenced. McCoy, a Navy veteran and former real estate agent, and Singleton, a certified nurse’s assistant before she was incarcerated, both registered to vote after Amendment 4 became law. They cast ballots in municipal elections in Jacksonville and have been volunteering ever since to register voters. McCoy serves on the board of the local chapter of the American Civil Liberties Union. Singleton is a member of the voting rights group Florida Rising.

Both women have also been collaborating on their own initiative, Harriet Tubman Freedom Fighters Corp., which focuses on economic justice, voter education and civic engagement.

Together with other volunteers, they provide meals to homeless people. They knock on doors, handing out literature about registering to vote. In December, they helped get out the vote for the two U.S. Senate runoff elections in Georgia.

“We tell people, we have been disenfranchised, we can’t vote, so you go out and vote for us,” McCoy said. “If not, our neighborhoods are going to keep on being rundown. We’re going to keep having these homeless problems. We are people that have a foot on our neck. We are gonna rise up.”

All the while, both women face economic peril. McCoy, 63, lives as simply as she can on unemployment benefits and the small stimulus check she got last year. She struggles to pay her mortgage and maintain her car. She has been turned down for jobs at Walmart, insurance companies and communications firms.

“I get an interview, they all say they really love me, but once they do a background check on me, they say they just can’t (hire me),” McCoy said.

Singleton said that if it weren’t for her husband, an Army veteran, post office worker and truck driver, she would not be able to keep a roof over her head.

‘Another form of slavery’

Neither woman has any savings. And since Duval County, Florida, where they live, requires all restitution to be paid in one lump sum, they can’t even chip away at their debt by making payments.

“Who can pay an amount of money like that all at once?” McCoy said. “I mean, someone probably can, but not us.”

Despite their troubles, McCoy and Singleton said they believe the legal fight that the SPLC is waging on their behalf will bear fruit.

“Having our vote taken away, it’s just another form of slavery,” Singleton said. “And me and Rosemary decided we ain’t going back. We are not going back to slavery. We’re going to keep fighting this and we’re going to win in the end.”