It was 24 hours before Georgia’s crucial runoff Senate elections and Kathy Allen’s ballot was still stuck in an office park in New Hebron, Mississippi.

Using the tracking app on her phone, Allen could see exactly where the ballot was. She could tell that it sat in an Atlanta post office for three days. That didn’t put it any closer to being counted.

Sitting at the side of her dying mother, far away from her home in Marietta, Georgia, Allen was in despair. A pandemic had taken her job. Illness was stealing her mother. And now, on the eve of a vote she cared about more than any other in her lifetime, the vagaries of the postal system were taking her voice. 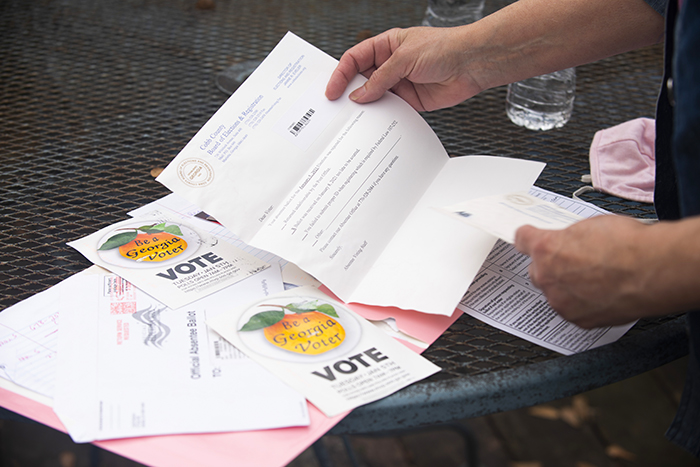 Allen’s ballot never did get counted. But in the three statewide elections in Georgia between January 2020 and January 2021, more than 1 million mail-in votes did, far exceeding past election cycles in the state. The huge vote-by-mail turnout helped Democrats win the presidential contest in Georgia and flip both the state’s U.S. Senate seats from Republican to Democratic for the first time in decades.

If Republicans in Georgia have their way, voting absentee will get harder, not easier, the next time around. With a sweeping series of bills making their way through the Georgia Senate, Republicans are attempting to end no-excuse absentee voting, which since 2005 has allowed registered voters in the state to request and cast mail-in ballots for any reason and not just if they are out-of-state, elderly or disabled.

The legislation would require absentee voters to provide their driver’s license or state identification number on their applications and the oath envelopes that contain the ballot. Voters lacking such identification would have to include a copy of another form of accepted identification. Currently, registered Georgia voters need only provide their signature on an application form to request an absentee ballot. The signature is matched with others in their registration file before ballots are accepted.

The Southern Poverty Law Center is among the organizations pushing back on the proposed new restrictions.

In February, Nancy Abudu, deputy legal director for the SPLC’s Voting Rights Practice Group, called the legislation “a marathon of anti-voter activity ... designed to infringe on everyone’s freedom to vote – with particular and intentional harm to voters of color.”

At a hearing the same month of a Special Committee on Election Integrity convened by the Georgia state Senate, SPLC voting rights Staff Attorney Poy Winichakul testified that the photo ID requirement “does nothing to enhance election security. Instead, it is a calculated attempt to rein in the participation of voters of color and other voters in the political process.”

The legislation would also shorten the amount of time voters have to request ballots and to send them in. That means the considerable obstacles that tripped up Kathy Allen – her ballot was first sent to the wrong address, and despite express mail it took six days to get to her county elections board – are likely to affect many more voters.

Yet for Allen, 62, mail-in voting was her only chance of casting a ballot at all.

The resident of Cobb County, in the suburbs of Atlanta, had voted regularly her whole adult life. But as the general election approached, her mother was getting sicker with lymphedema. In March 2020, Allen made the eight-hour drive to her childhood home in Indianola, Mississippi, thinking it would only be for a few weeks. But the need to care for her mother, along with concerns that traveling could put them both in danger, kept her there through this February, when her mother passed away.

Determined to vote despite her inability to get back home because, she recalled later, “I do believe that small acts added together can change the world,” Allen applied for and mailed in her ballot for the presidential election. It never arrived at her polling place.

“I was trying to keep tabs on it,” she said.

But the ballot traveled from the little town of 10,000 people where her mother’s house is located to postal facilities in Jackson and then, inexplicably, south to New Hebron, instead of east to its intended destination at the polling station in the Atlanta area.

“It was just traumatizing that it got stuck,” Allen said. “I was already at my wit’s end, and this just created additional stress and trauma.”

Allen said she is still distressed that her vote wasn’t counted in the two elections. She wants to make sure that voting, not just for her but for anyone, isn’t an odyssey in the future.

“It’s a fight that everybody has to join in now,” Allen said. “It’s an uphill battle, but a lot of people want to do the right thing.”