It’s all that. But in some ways – though certainly not including the prevalent racial terror and violence of the era – it’s much like old Jim Crow, wrapped up in a new package, one that’s only slightly less transparent than the laws enacted across the South in the late 1800s and early 1900s to deny Black people access to the ballot, along with many other rights.

And so the scene of the March 25 bill signing couldn’t have been more appropriate: Georgia Gov. Brian Kemp surrounded by six other white men  standing in front of a painting of a Georgia plantation where hundreds of people had been enslaved prior to the Civil War. 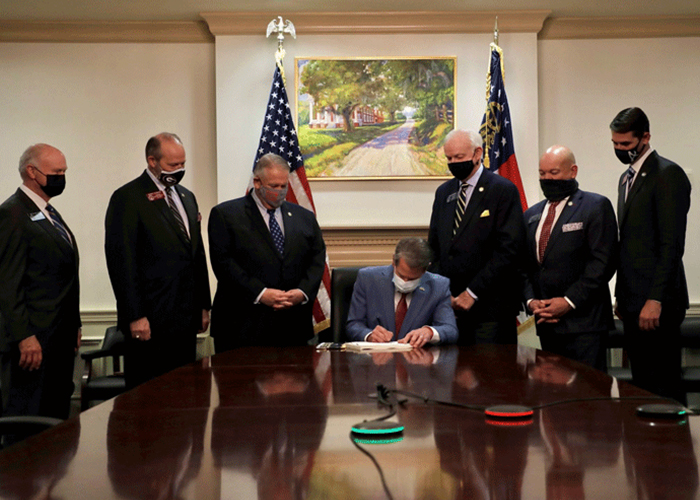 Georgia Gov. Brian Kemp signs into law a sweeping overhaul of state elections on March 25, 2021, at the State Capitol in Atlanta. The law includes new restrictions on voting and greater legislative control over how elections are run. (Handout photo)

The painting wasn’t the only symbol of the racist politics at play that day in Georgia, as Will Bunch of the Philadelphia Inquirer wrote:

At the very moment that Kemp was signing the law with his all-white posse, a Black female Georgia lawmaker – Rep. Park Cannon – who’d knocked on the governor’s door in the hopes of watching the bill signing was instead dragged away and arrested by state troopers, in a scene that probably had the Deep South’s racist sheriffs of yesteryear like Bull Connor or Jim Clark smiling in whatever fiery hellhole they now inhabit. 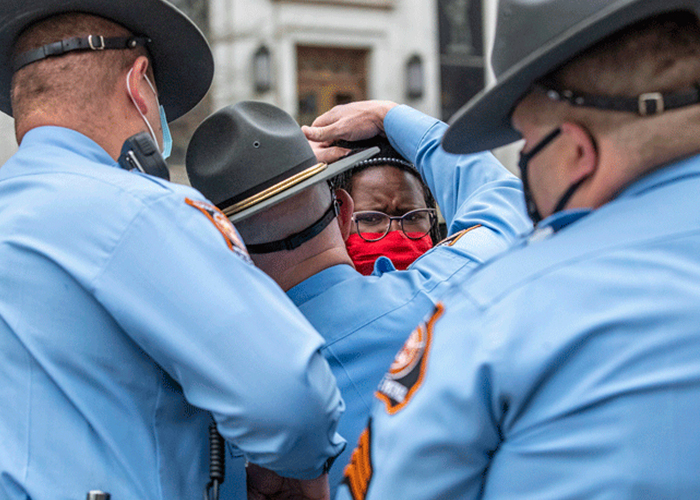 Georgia state Rep. Park Cannon is placed into the back of a Capitol Police car in Atlanta on March 25, 2021. Cannon was arrested at the State Capitol after she attempted to knock on the door of Gov. Brian Kemp’s office. Kemp had just signed into law a sweeping overhaul of state elections that includes restrictions on voting. (Alyssa Pointer/Atlanta Journal-Constitution via AP, File)

For those who don’t know or understand the parallels between the period we’re in today and what happened more than a century ago, it’s worth a quick review.

At the end of Reconstruction, in an era known by historians as the “Redemption,” Southern states enacted an array of Jim Crow laws and new state constitutions designed and promoted explicitly to disenfranchise Black people. Unlike today, there was no attempt to disguise what was happening. And it was all done for a simple reason: to maintain political power for the aristocratic class at a time when Black people were gaining a political voice and helping elect candidates of their choice.

After the 14th Amendment guaranteed Black men the right to vote in 1868, for example, 33 Black members were elected to the Georgia Assembly. The same thing happened in legislatures and various city and county offices across the South.

Of course, though the impact was not nearly as severe, the Jim Crow laws also disenfranchised many poor white people who were increasingly siding with the more progressive candidates not only favored by their Black neighbors but more likely to respond to their similar needs. The laws and customs of Jim Crow took care of this loss for poor white people by segregating society along racial lines and creating alternative systems of justice, relegating Black people to second-class citizenship.

Dr. Martin Luther King Jr. spoke of this phenomenon at the conclusion of the Selma-to-Montgomery voting rights march on March 25, 1965 – 56 years to the day before the signing of Georgia’s new law. With a nod to the historian C. Vann Woodward, King noted that segregation was not a “natural result of hatred between the races immediately after the Civil War.” It was, rather, a “political stratagem” employed by the ruling class to “keep the southern masses divided and southern labor the cheapest in the land.”

King told the thousands of marchers massed at the Alabama Capitol:

[T]he southern aristocracy took the world and gave the poor white man Jim Crow. … And when his wrinkled stomach cried out for the food that his empty pockets could not provide, he ate Jim Crow, a psychological bird that told him that no matter how bad off he was, at least he was a white man, better than the black man. And he ate Jim Crow. And when his undernourished children cried out for the necessities that his low wages could not provide, he showed them the Jim Crow signs on the buses and in the stores, on the streets and in the public buildings. And his children, too, learned to feed upon Jim Crow, their last outpost of psychological oblivion.

So what do we have today?

In Georgia, we have a Republican Party that is desperately trying to hold onto power in the face of a changing electorate in a state growing more racially, ethnically and culturally diverse by the day. Here’s what the Republican chair of the Gwinnett County Elections Board, Alice O’Lenick, said in promoting voting laws changes at the beginning of the legislative session in January: “They don’t have to change all of them, but they’ve got to change the major parts of them so that we at least have a shot at winning.”

O’Lenick’s comments came shortly after the historic Jan. 5 runoff elections in which her party lost two seats in the U.S. Senate and following Donald Trump’s loss in the general election, after which the former president launched a disinformation campaign of baseless claims and conspiracy theories about alleged voter fraud.

It’s no coincidence that these numerous statutory changes, which make virtually every aspect of voting more difficult, came after Georgia voters – and Black voters especially – turned out in historic numbers despite the COVID-19 pandemic. Nearly 5 million people in Georgia voted in the 2020 general election, compared to 4.1 million in 2016.

Nearly 30% of Black voters cast their ballot by mail in the 2020 general election, compared to 24% of white voters. And candidates preferred by Black voters received a higher percentage of absentee votes relative to their overall percentage of the final vote count.

In the Jan. 5 runoffs for the two Senate seats, more than 2 million voters cast early, in-person ballots – and this early voting turnout was particularly high in counties with large minority populations, with some counties seeing more than a 500% increase.

There was, as we all know, no voter fraud, as the defeated president claimed. In the litigation that followed, state and federal judges rejected at least nine lawsuits challenging Georgia’s results based on false claims. Courts across the country reached the same conclusion in dozens of other suits. Georgia Secretary of State Brad Raffensperger, whose office investigated the false claims, described the elections as “secure, reliable and efficient.”

Nevertheless, Georgia House Speaker David Ralston said that he did not want every registered voter to receive an absentee ballot because it would “certainly drive up turnout.”

So the Republican-controlled Legislature acted. In an analysis, The New York Times identified 16 provisions in the 98-page law “that hamper the right to vote for some Georgians or strip power from state and local elections officials and give it to legislators.”

You can read the details of the law and a review of Georgia’s long history of voter disenfranchisement in the lawsuit we filed along with our allies at the end of March.

Because of the new law, there will be less time to request an absentee ballot and onerous new requirements for obtaining one. It will be illegal for an election official to mail out an absentee ballot to a voter unless the voter has requested one. Drop boxes will be vastly curtailed; only one will be allowed for every 100,000 voters in a county, with some small counties able to have just one. This provision greatly impacts more populous counties, which will have to reduce the number of available drop boxes by as much as half or more. Mobile voting centers are banned.

It will even be against the law to approach a voter standing in line with food and water.

Georgia was the first state to enact such sweeping election law changes in the backlash to the 2020 elections. But other states are getting into the act.

According to the Brennan Center for Justice, as of March 24, lawmakers in 47 states had filed 361 bills with voting restrictions – with Georgia, Arizona and Texas leading the pack. Five bills had already been signed into law, and at least 55 were moving through legislatures in 24 states. Most of the proposals take aim at absentee voting, and many seek to strip power from local officials. “After county election officials conducted elections during a pandemic and stood up to pressure to manipulate the results, state lawmakers are now seeking new criminal penalties to target these officials,” the Brennan Center analysis says.

As of this writing, two anti-voter bills were heading to the floor of the House and Senate in Florida this week.

The fact that this radical assault on voting rights comes amid a period when the white nationalist movement is growing larger and more militant is no accident. Both are extreme reactions to America’s growing diversity. Both feed on that same “psychological bird” that King spoke about in 1965.

We saw a white supremacist assault on the U.S. Capitol on Jan. 6, one fueled by lies and conspiracy theories – led by Trump but promoted by many leaders in his party. Now, Republican lawmakers in numerous states they control are determined to exploit those same fraudulent claims to justify new restrictions on voting rights.

In 1907, Hoke Smith won the governor’s office in Georgia after campaigning on a pledge to disenfranchise Black voters, vowing, “The white voters of Georgia are to be given the fullest opportunity to rule in the state and to express their wishes at the ballot box.”

Georgia Gov. Kemp and his party weren’t as open about their new law. But the intent was just as clear.

In the photo at the top of this story, people wait in a long line to vote at the Buckhead library in Atlanta on the first day of in-person early voting for the Georgia Senate runoff election on Monday, Dec. 14, 2020. (Jason Armond/Los Angeles Times via Getty Images)