Nearly a week before the verdict in the trial of Derek Chauvin, the former Minneapolis police officer who murdered George Floyd by placing a knee on his neck for over nine minutes, I, Tafeni, was conducting an interview in front of the Civil Rights Memorial Center and was asked what my expectations regarding the pending verdict would be.

At the time, there was no verdict, and closing arguments were set to begin the following day. I paused. Honestly, I hadn’t thought about it. But as I reflected on this moment, I realized my expectations weren’t high at all.

The long history of police killing Black people and not being held accountable for it showed us that it would be almost a miracle if Chauvin was found guilty. Even with ample video evidence, filmed by 17-year-old Darnella Frazier, along with testimony from eyewitnesses and other law enforcement personnel, I was not convinced beyond a reasonable doubt that Chauvin would be convicted.

I’m old enough to recall the savage beating of a Black man named Rodney King in 1991 by four Los Angeles police officers – three of them white – that was caught on camera by a bystander. The graphic video was broadcast into homes nationwide and around the globe. But in that case, like in many others involving assaults on Black life, the officers were found not guilty. 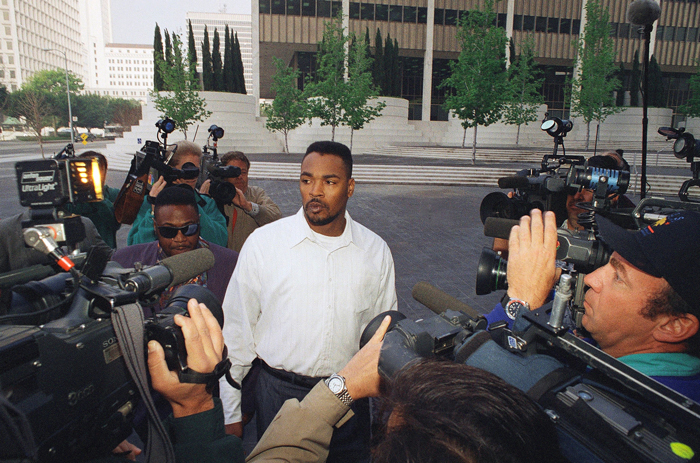 Rodney King makes his way through a crowd of news media outside the Royal Federal Building in downtown Los Angeles on March 29, 1994. King was arriving to resume testimony in his $9.5 million lawsuit against the city of Los Angeles after four police officers had savagely beaten him. (AP Photo/Michael Caulfield)

In the days leading up to the Chauvin verdict, I stood in front of the Memorial conducting this interview about civil rights martyrs. As I did so, I couldn’t help but reflect on Cpl. Roman Ducksworth Jr., a military policeman on emergency leave to be with his wife and baby, who was taken from a bus and killed by a police officer on April 9, 1962. I thought of Jimmie Lee Jackson, who died on Feb. 26, 1965, after he was shot by a state trooper during a voting rights march, and so many others.

Not only did I reflect on the past, but also more recent times as unarmed Black people have been murdered by police, often without a sufficient level of accountability. I thought of Breonna Taylor, Atatiana Jefferson, Stephon Clark, Ahmaud Arbery, Botham Jean, Philando Castile and many more. I also wondered how many more times I will have to conduct interviews like this at the Memorial, confronted with similar questions.

The Chauvin verdict was not the norm and shouldn’t be viewed as a metric of justice. The conviction was just one instance and marks only one small step as the march continues toward holding an entire system accountable. Historically, when police use unjustifiable force against Black people, there is no conviction. There is no accountability. There is no justice.

This was evident in the way that people responded to the pending verdict. We began to see the call for the National Guard, the barricading of businesses and law enforcement called to the front lines. The expectation that the world was prepping for massive protest was telling. We, like many others, were glued to the television and news alerts once we were notified that the jury had reached a verdict. As the judge read the verdicts of guilty on all three counts, we exhaled and committed to celebrating with the community – but just for a moment.

We could not fully breathe in the sweet scent of justice because the foul stench of another murder at the hands of police that same week – not far from the jury trial – still hung in the air. Daunte Wright was fatally shot by a Minnesota police officer during a traffic stop, after the officer apparently mistook her handgun for a Taser.

Before we could catch our breath, a 16-year-old Black girl named Ma’Khia Bryant was shot by police after charging at two other teenage girls with a knife. We wondered if there might have been some other way for police to stop her besides shooting her to death.

Before we could breathe again, we learned about the police shooting death of Andrew Brown Jr., a Black man whose killing was described as an “execution” by family members and attorneys representing him. 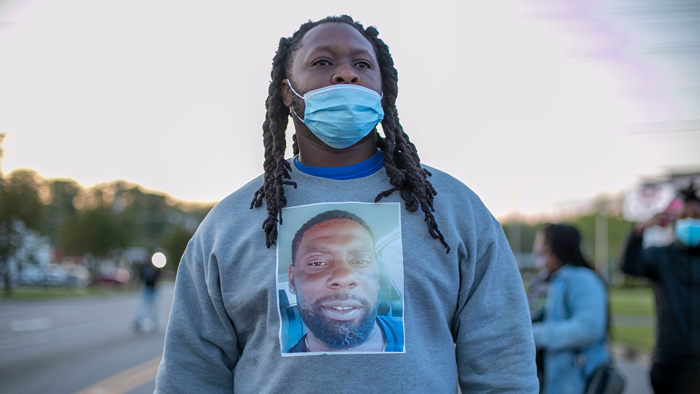 A demonstrator wears a shirt bearing an image of Andrew Brown Jr. during a march on April 22, 2021, in Elizabeth City, N.C. The march was in reaction to the death of Brown, who was shot and killed by a deputy sheriff earlier in the week. (Robert Willett/The News & Observer via AP)

It seems like open season for hunting and killing Black folks, as more and more incidents of police killing us are reported on the news and across social media.

“I can’t breathe.” These were the final words that Eric Garner spoke when he was killed by police in New York as they put a choke hold on him. These were the same words that George Floyd uttered when Chauvin kneeled on his neck for nine and a half minutes.

Before we in the Black community can breathe a collective sigh of relief, violence against us from police – or from wannabe cops – must come to an end.

Tafeni English is the director of the SPLC’s Civil Rights Memorial Center. Brad Bennett is the SPLC’s interim editorial director.

Lead photo: A demonstrator places flowers at a memorial outside Cup Foods in Minneapolis on April 20, 2021, as supporters gather to celebrate the murder conviction of former police officer Derek Chauvin in the killing of George Floyd. (AP Photo/John Minchillo)