The doors of the precinct were about to shut on the January evening when Javier Rivas-Sanchez rushed in to cast the first ballot of his life.

Still in clothes caked with dirt from his landscaping job, the 22-year-old saw the normally 45-minute drive from his worksite stretched longer with traffic. It was a good thing for him that the polling place was still open when he got in line just before 7 p.m. It meant that he would have the opportunity to vote in the U.S. Senate race in Georgia.

Latino Community Fund Georgia (LCF Georgia) and a coalition of civic organizations encouraged Rivas-Sanchez and more than 1.2 million other Latinx people to cast ballots in the last election cycle. But a new law widely restricts how Georgians like Rivas-Sanchez can vote.

Among multiple provisions, the law, SB 202, curtails ballot access to voters in fast-growing urban and suburban counties – which are home to many immigrants and people of color – by limiting weekday voting hours in most cases to between 9 a.m. and 5 p.m., too early for people like Rivas-Sanchez to get to the polls.

That is just one of the many restrictions in the 98-page law, which also makes it harder to vote by absentee ballot, severely limits the number of secure ballot drop boxes, bans mobile voting centers, disqualifies most out-of-precinct provisional ballots, reduces early voting for runoff elections and dismantles local control of elections. It even criminalizes offering food and water to people too close to the voter lines, which tend to be longer in densely populated communities of immigrants and people of color.

Enacted amid demonstrably false claims about “voter fraud” perpetuated by former President Donald Trump and his allies after Trump and two U.S. senators from Georgia were defeated at the polls, SB 202 is a wide-ranging and blatant repudiation of voter rights in a Southern state with a long history of disenfranchisement, particularly for people of color.

The law is part of a wave of legislation designed to suppress the vote that has swept the country since the 2020 election, adding force to a dark wave of such laws passed over the last decade. Hours after Florida’s Republican Gov. Ron DeSantis hastily signed a plethora of new voting restrictions, the Republican-led Legislature in Texas pressed ahead with its own far-reaching bill that would make it one of the most difficult states in the nation in which to cast a ballot. 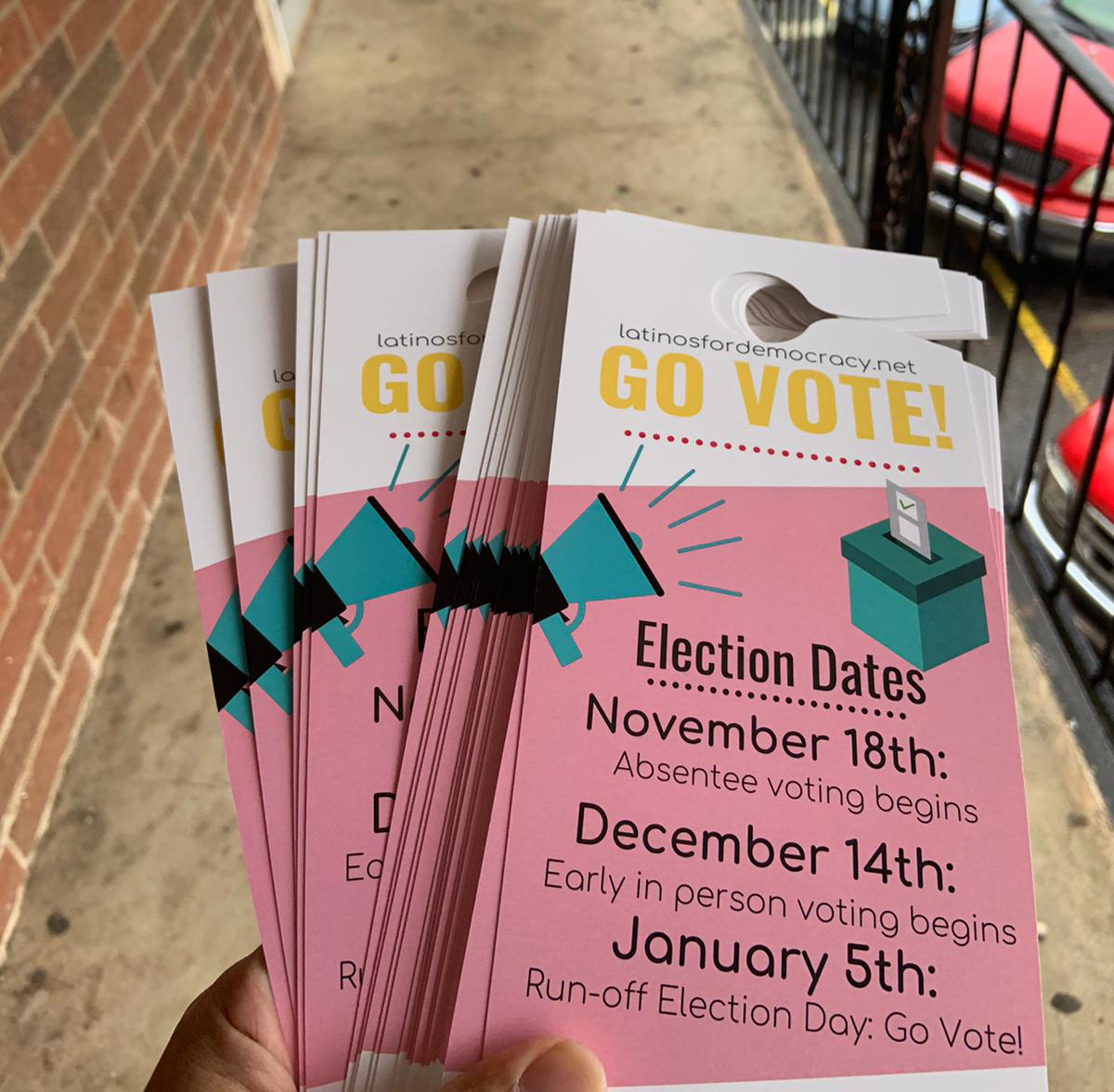 Since March, more than 250 bills restricting the vote in the name of tackling election fraud were pending in 43 states, according to The Washington Post, which cites the nonpartisan Brennan Center for Justice as its source. Courts have found no evidence of systemic, widespread voter fraud during the 2020 election cycle.

Pushing back against SB 202 is LCF Georgia, a nonprofit that for the past several years has led a coalition of civic organizations in a massive effort to register Latinx voters, get them to the polls, help them apply for absentee ballots and protect their votes. In March, LCF Georgia and several other civil rights organizations became party to a lawsuit filed in federal court challenging the new law.

The lawsuit, Sixth District of the African Methodist Episcopal Church v. Kemp, charges that multiple provisions of the law violate Section 2 of the Voting Rights Act and infringe on Georgians’ rights under the 14th and 15th amendments, as well as the First Amendment in terms of the ban on the free distribution of food and water. The suit was brought on behalf of LCF Georgia and other organizations by the Southern Poverty Law Center (SPLC), American Civil Liberties Union (ACLU), ACLU of Georgia, NAACP Legal Defense and Educational Fund Inc. (LDF), and the law firms WilmerHale and Davis Wright Tremaine.

“This law is a continuation of efforts in Georgia to minimize voter participation among Latinx and other Black and Brown voters,” said Nancy Abudu, deputy legal director for the SPLC’s Voting Rights Practice Group. “We know that Black turnout and Latinx turnout increased significantly in the 2020 election, and then we get this bill. We know there was significant participation by these new voters in a runoff election, and then we get this bill shortening the time for people to register and vote during a runoff. The state says it is not targeting these voters, but there is no question who is the most impacted by this law, who is the most burdened.”

Along the stretch of the Atlanta area’s Buford Highway that the Rivas-Sanchez family calls home, immigrant communities live with many burdens. They also enjoy the aromas, colors and vibrancy of a multicultural tapestry. Local merchants sell Mexican party dresses, Vietnamese snacks and Salvadoran empanadas. The music of myriad cultures spills out of open apartment windows. Colorful murals adorn storefronts.

But while the area that many call BuHi (named after Buford Highway) reminds immigrants of home, navigating the electoral system can make them feel like strangers in a strange land, said Sergio Mendez, grants administrator for LCF Georgia.

“As far as voting, we believe that simple is better for getting people out there and participating, having their voices heard,” Mendez said. “One of the main struggles we encounter with get-out-the-vote efforts is the confusion that comes from government policies and rules and regulations, especially when you start layering them on.” 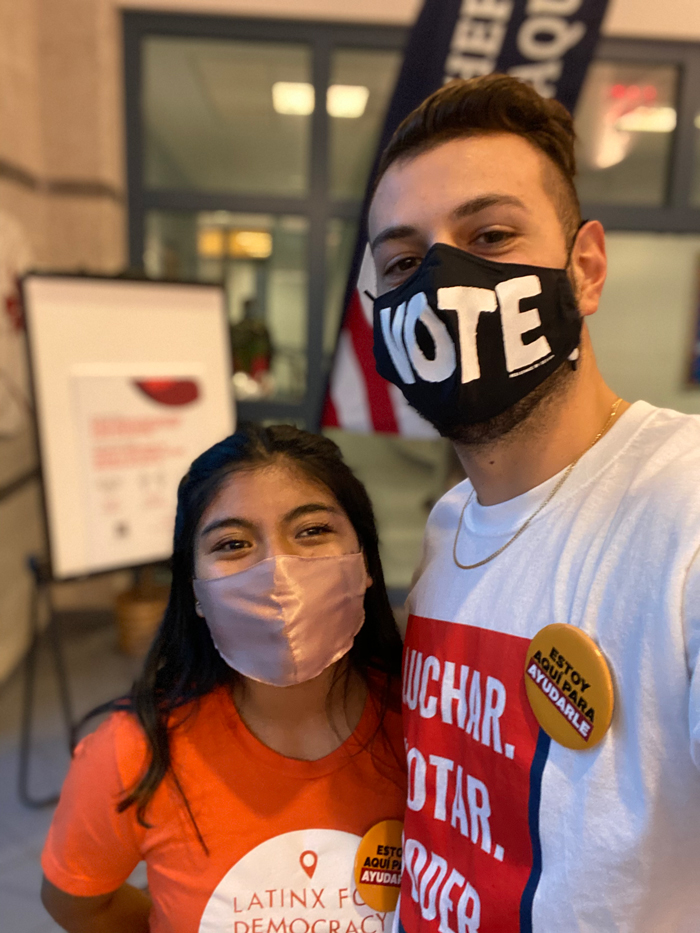 In this past election cycle, canvassers for LCF Georgia and seven partner organizations fanned out the length of Buford Highway and to Latinx communities throughout Georgia to encourage people to register and vote. They texted half a million voters, mailed more than 1.2 million bilingual voter education pamphlets, and distributed hundreds of thousands of flyers, mostly in Spanish but also in several Mayan languages. They went door to door in six counties.

What’s more, the organizations deployed a small army of election protection workers and volunteers who helped people feel safe going to vote. They also helped voters apply for absentee ballots and get to drop boxes and precincts.

Victoria Rivas-Sanchez, Javier’s sister, was among the community organizers who made a difference last year. A marketing student then in her last semester at Georgia State University, the 24-year-old helped community members fill out absentee ballot applications and marshalled a small team of volunteers to engage eligible voters on various social media platforms. They hung flyers on doors and sat patiently with people explaining to them the importance of casting a ballot.

The new law will make all those efforts harder. It cuts the time period to request absentee ballots by more than half, from nearly six months before an election to fewer than three. That is likely to reduce the number of people who seek absentee ballots and put significant strain on efforts by already overburdened organizations in their get-out-the-vote efforts.

Another deep concern likely to impact the populations LCF Georgia serves is that there are strict new ID requirements for absentee ballots. Previously, voters were simply required to sign absentee ballot applications. Now they will have to provide their date of birth and a number from a driver’s license or other state-issued identification. In some cases, they must include partial Social Security numbers, creating fears among voters of identity theft. Failing to correctly follow all the steps could get their ballots tossed out.

“People are apprehensive. These are new Americans having sometimes a lot of distrust of officials and police forces, having to do with the trauma of wherever they fled from,” Mendez said. “That translates into apprehension about doing something that might be illegal. They are worried that any mistakes they make could have criminal implications. Even when they are not actually at risk, it creates this climate of fear that really hampers getting out the vote.”

Javier Rivas-Sanchez and his sister are the children of immigrants from Guanajuato, Mexico. Their parents scratched out a living in Atlanta to raise them as U.S. citizens. Javier and his sister grew up translating for their parents, literally being their voice in a new country that could still make them feel fearful and alone.

Victoria Rivas-Sanchez now continues that kind of work for her community. The get-out-the-vote efforts in which she has participated over the past year have allowed her to reassert her own humanity in the midst of a pandemic. Her work has also prompted a deep process of learning the obstacles to representation that her community faces.

“It feels like with this new law, they are just doing everything they can to stop my community’s voice, to silence it,” she said. “But we’re going to just encourage everybody to get out and vote, no matter what.”