Living in New Orleans in 2015, CJ Hunt was frustrated that Confederate symbols still occupied the city’s common spaces – or “neutral grounds” – intended for all citizens, which he called “absurd.” At the time, the nation was reeling from the deadly attack at the historic Emanuel AME Church in Charleston, South Carolina, where nine Black people were killed by a young white supremacist who had posted a picture of himself with a Confederate flag.

But when the state of South Carolina removed the Confederate flag from its capitol, Hunt could tell a powerful movement was brewing to remove Confederate symbols nationwide. In New Orleans, the organizers of Take ‘Em Down NOLA, a grassroots organization that has fought for the removal of Confederate monuments, were already marching in the streets, and the mayor took the calls to remove those statues seriously when he demanded the removal of four monuments. The backlash, Hunt said, was intense. 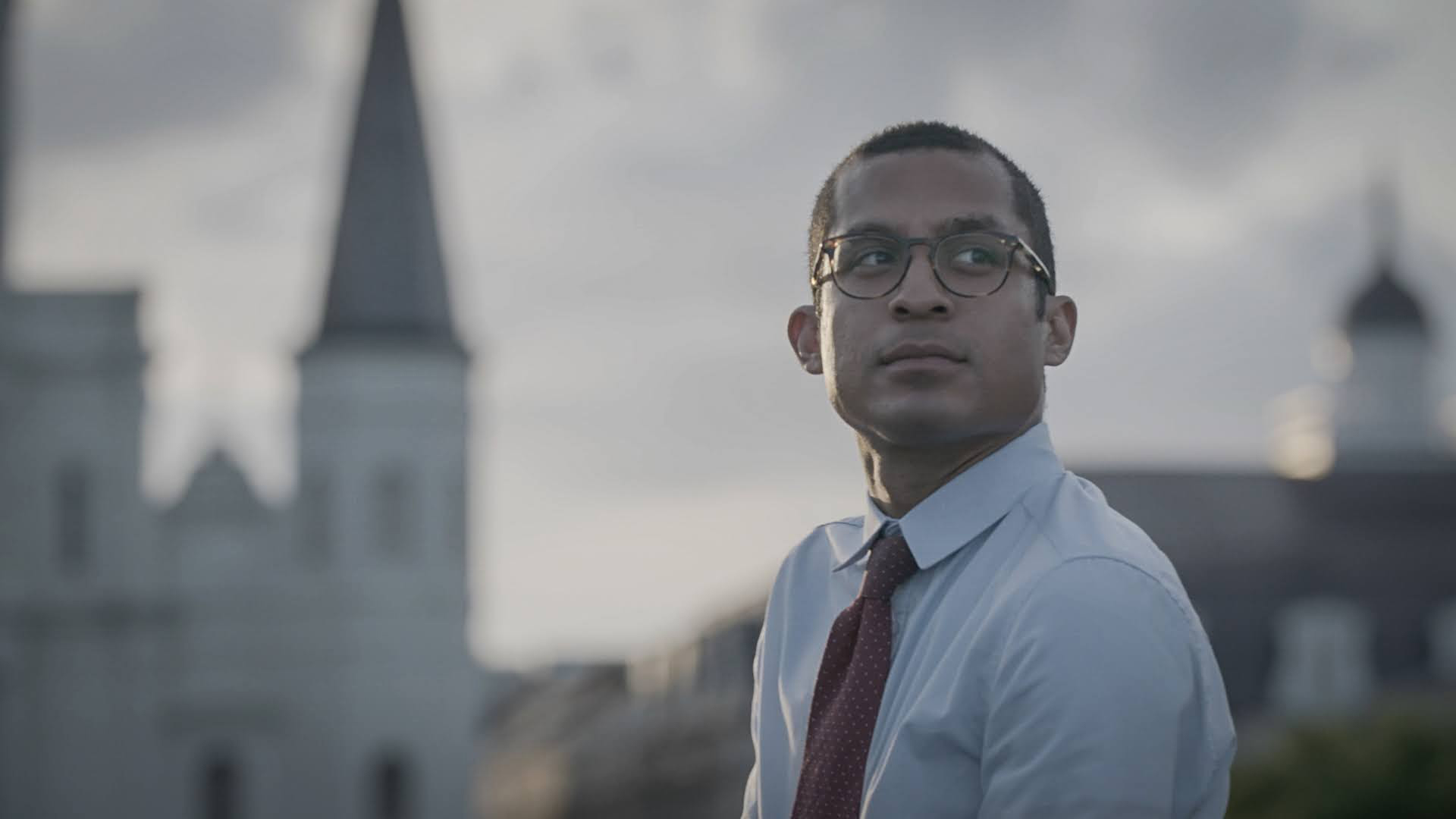 That same year, Hunt – a biracial comedian who now works as a field producer for The Daily Show – decided to capture why many of his white Southern neighbors become angry and even violent when Confederate monuments are taken down.

His debut feature documentary, The Neutral Ground, not only exposes why Southerners cling to Confederate iconography but also challenges the “Lost Cause” mythology – a romanticized, and false, version of Southern history in which the Confederacy and its leaders were fighting for “states’ rights” and defending their region against Northern aggression. 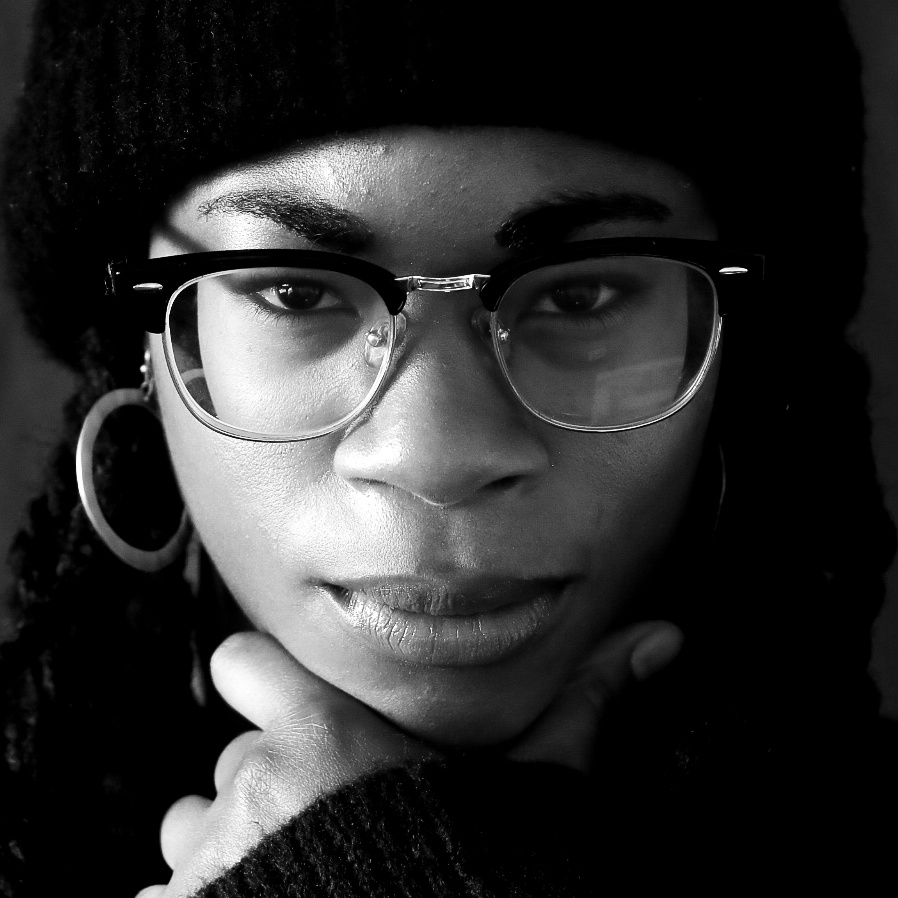 For the documentary, which won a Special Jury Mention at the 2021 Tribeca Film Festival, Hunt and his producing partner Darcy McKinnon teamed up with Courtney Staton, a Black organizer and filmmaker who co-organized the removal of the University of North Carolina at Chapel Hill’s Confederate monument, Silent Sam. As the film’s impact producer, Staton worked to ensure the film could be a springboard to transform the way people think about the “Lost Cause.”

“I wanted to find a way where we can end this conversation about white violence misinformation and talk about Black history and resistance,” Staton said. “Impact producing takes the documentary one step farther and asks how a film can change power on the ground – in this case, piercing the pernicious myth of the Lost Cause."

Producing the film led Hunt to a better comprehension of the white resentment and vitriol plaguing the country and how white supremacy comes at the expense of his Blackness – and that of others.

“The journey of looking at the Confederacy absolutely helped me understand my Blackness in a different way,” he said. “The journey of the film is the journey of me learning that my own Blackness must be grounded in something more than a confrontation with white supremacy, whether you’re chasing whiteness to possess it or expose it. I hope the film gives to all people of color the chance to ask, ‘What does it look like to give up the chase?’”

The documentary begins in December 2015, when Hunt, who serves as host and narrator, attends a rowdy city council meeting held to discuss the removal of the statues in New Orleans. An outraged Black man equates the statues’ presence with “subjugation, every day.” More follow suit.

But others – all white people – loudly argue that they “will not destroy the past” and that the statues represent “our history.” The stark divisions on the meaning of the statues become immediately clear. Those opposing the statues’ removal would later march the streets in protest, some wearing KKK uniforms. Although the city council votes to remove the statues immediately, death threats cause long delays.

In 2017, Hunt readies himself to travel across the South to seek an understanding of why many white people in the region hold such reverence for a losing, renegade army from 1865. What Hunt and Staton find is that myth, transformed into nostalgia, plays a large part in people’s attachment to the Confederacy.

“They could let [the myth] go, but it would shake their entire foundation of how they see the world,” Staton, 23, told the SPLC. “When you start to reckon with the real history, you wonder what else you could be wrong about. And while dispelling the myth does come with the shakeup of the foundation, an awakening is possible.”

In the film, Hunt is so determined to understand this curious attachment to the Confederacy that he attends a Civil War reenactment, despite admitting that he’s scared. There, he is told that the iconic, anti-slavery novel Uncle Tom’s Cabin was “propaganda” and that it’s “bulls*it” that the war was fought over slavery. Moreover, one man claims it’s “horse hockey” that Black people were kept in bondage during the war.

Historical documents, of course, tell a different story. The film shows the viewer, for example, how the Mississippi Secession Convention declared, “Our position is thoroughly identified with the institution of slavery – the greatest material interest of the world.”

Similarly, Confederate Vice President Alexander H. Stephens said in his Cornerstone Address, “Our … cornerstone rests upon the great truth that the negro is not equal to the white man; that slavery, subordination to the superior race, is his natural and normal condition.”

The film also exposes how the Old South has been glorified in textbooks and Southern lore as a “genteel society.” The war was heroic and just, according to the “Lost Cause” mythology, a narrative that romanticizes the Confederacy while burying the history of the white supremacy upon which it was based.

It’s at this point that Hunt asks the viewer, “Can you admit the country was built on white supremacy?”

It would take two years for the city to remove the statues, even though, as then-City Council President Jason Williams says in the film, New Orleans can build cranes to build hotels but can’t find a crane to tear down a statue.

On April 24, 2017, Hunt watches as masked crews finally tear down the Battle of Liberty Place statue, a stone obelisk once described as a symbol of “white pride” by former Klan leader David Duke. The removal of the Confederate Gen. Pierre Gustave Toutant-Beauregard statue takes place on May 16 and 17, and the statue of Jefferson Davis, the president of the Confederate States of America, comes down on May 11 at 3 a.m. After the statue of Gen. Robert E. Lee – the commander of the Confederate States Army who was an enslaver and white supremacist – is removed from its pedestal on May 19, Hunt asks himself and the viewer if anything is now possible.

“We started this film in a world where a proposal to take down four monuments was revolutionary,” Hunt said. “No American city had done a Confederate statue removal before. Now in 2020, it’s normal. I am incredibly grounded about the ways white Americans’ investment in white supremacy constricts how progress is made, but it’s our job to remember that change is possible.”

Hunt then wonders if the nation is at a turning point, or if this movement is just a flash in the pan.

“People are realizing that all of our struggles are interconnected,” she said. “I see a moment of us waking up to racism. We are facing a big campaign, but there’s no way this is just a flash in the pan. It’s all building off the movements of the past. I remember what happened in the sixties and seventies, and even though some came back to attack us, there were pieces of the wheel that were removed.”

Hunt and Staton are already talking to teachers in New Orleans to create lesson plans, a discussion guide and curricula to incorporate the documentary into their classrooms.

But the very idea of teaching the truth about the history of racial oppression in the United States is under attack.

“Some teachers are not allowed to teach about Frederick Douglass, so it’s great that we have this resource that can now allow others to shape their own messaging and fight against the lies,” Staton said.

Hunt and Staton’s approach is to develop materials educators can use right away, without limitations, and work with teachers who are already teaching about slavery and the Civil War.

“What I really love about The Neutral Ground is its emphasis on the truth,” said Jalaya Liles Dunn, director of the SPLC’s Learning for Justice (LFJ) program. “It corrects so many of the lies we’ve been told and taught about our history by lifting up the facts and the primary documents that support them. In fact, it aligns nicely with the key concepts of LFJ’s Teaching Hard History framework. For educators, we’ve already created resources to help them do this history justice in the classroom, and this film could be used in whole as more professional learning on the subject or in part as a classroom resource.”

“The increase of legislation and ‘registries’ targeting anti-racist teachers and practices this year alone have made it clear that honest learning about the history of our country needs to happen at the community level as well.”

“Lawmakers are making it harder to teach the truth about history,” Hunt said. “Teachers are on the offense, and our defensive strategy is to push back against these lawmakers who are doing what the Lost Cause has always done.”

‘So much to unpack’

Six years after the Charleston church shooting, about 300 Confederate statues and other symbols have been removed from public spaces. But nearly 1,900 remain and some Southern states have enacted laws that make it illegal or difficult for local officials to take them down.

Staton wonders, if we can’t acknowledge the past enough to simply move statues, how are we going to move the nation toward other important conversations?

“These monuments didn’t have to be there,” she said. “But with the movement to remove symbols and laying bare the institutions and folks who want to keep the monuments up shows us that we can apply conversations to all other systems. We still have so much to unpack, but we can’t have these conversations if we’re still believing in the Lost Cause.”

*The Neutral Ground is currently airing on the Public Broadcasting Service. Watch here.