The private security guard, armed with an assault rifle, moved swiftly through the dingy halls of the extended-stay, residential hotel outside of Atlanta on a crisp fall day.

He banged on one door after another, pointing the rifle at longtime residents and forcing them to leave.

The stunning evictions terrified people living at Efficiency Lodge in Decatur, Georgia. Many of them are low-income workers and families with young children who had made the lodge home for years because they had no other option besides living on the street. Only the emergency efforts of a local church ensured that they had beds to sleep in that night in September 2020.

“I never seen nothing like that in my life, just to put a person out on the street,” one resident, Armetrius Neason, told The Associated Press. 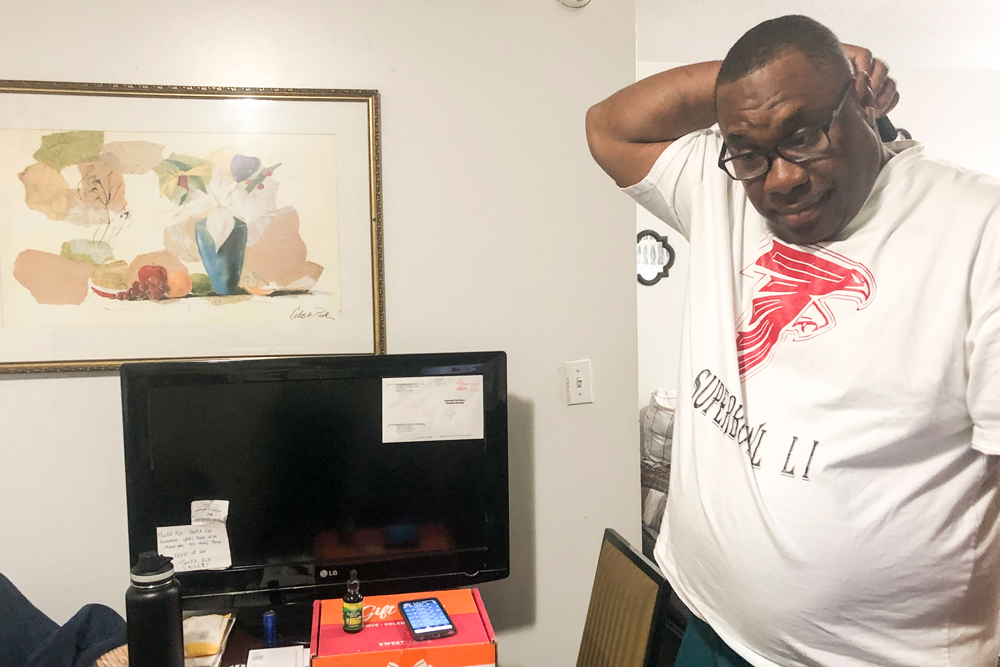 Armetrius Neason poses for a photo inside his room at the Efficiency Lodge hotel outside Atlanta on March 16, 2021. Neason has lived at the hotel for more than five years, but was told during the pandemic he had fallen behind on rent and could be immediately locked out. (AP Photo/Sudhin S. Thanawala)

Neason, a carpenter, had lived in the hotel for five years, in a room with a small kitchen he had carefully decorated – until the security guard came with the gun.

“You had to go then,” Neason said.

Neason and two other tenants are plaintiffs in a lawsuit filed against the hotel’s owners by the Atlanta Legal Aid Society. The suit argues that because the residents lived there for months or even years, they should be given the same rights as tenants in apartments or houses. Their attorneys argue that the expulsions violate laws designed to protect tenants.

Most of the tenants who were forced out never got to return. But Neason and one other tenant are living at the hotel again. A Superior Court judge ruled that they must be considered tenants under the law and prohibited Efficiency Lodge from kicking them out without filing an eviction in court. The hotel owners are appealing the ruling.

“These sorts of extended-stay hotels can provide a source of stable, safe housing for folks, many of them low-income Black and Brown folks, who otherwise would be on the street,” said Emily Early, senior supervising attorney for the SPLC’s Economic Justice Project. “As a matter of law and a matter of morality, these are their homes and they have the right to have them protected. These sorts of places should be not only extending the same sorts of protections that other renters enjoy, but absolutely providing a safe and comfortable environment for people to live.”

‘They should be treated as tenants’

How the case is ultimately decided may have far-reaching implications. Unemployment during the COVID-19 pandemic has made it harder for millions of Americans to keep up with the rent.

A federal moratorium on evictions for people in dire financial straits does not apply to hotel guests. In the past year, people living in hotels in California, Colorado, Florida, Louisiana, New Jersey and Virginia have reported being threatened with immediate eviction. 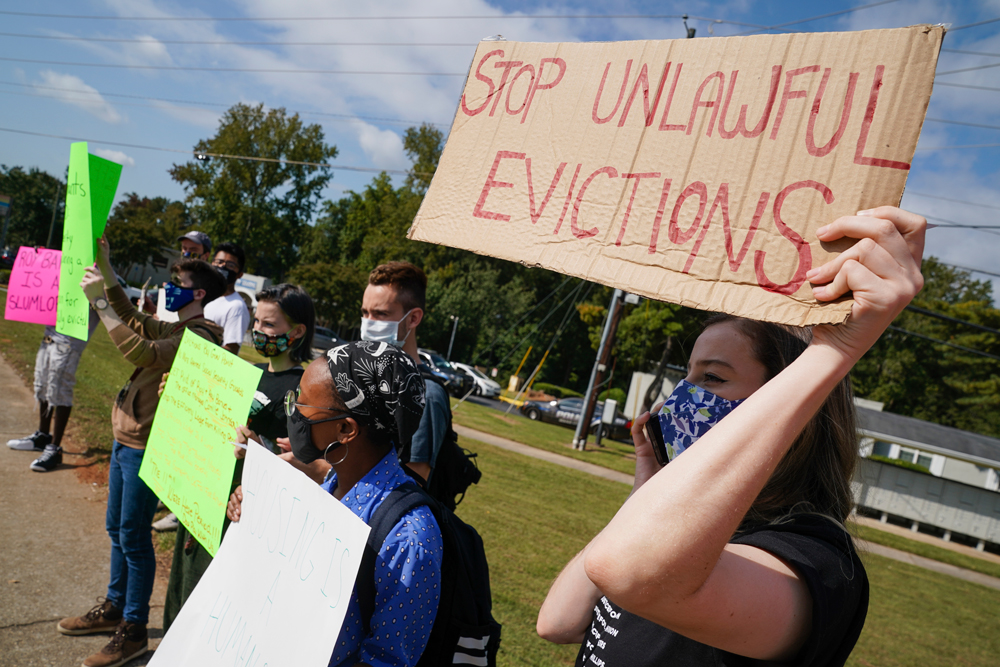 Because they are on government assistance or living from paycheck to paycheck, many of these people live in low-budget weekly rentals. The units come with furniture and some cooking facilities, all for about $200 a week.

Many residents who live in these units are unable to qualify for a traditional apartment because they might have been recently evicted, leaving a negative mark on their credit report; they can’t afford the security deposit or monthly rental rate; or otherwise cannot qualify because of their rental history.

In many cases, these units are poorly maintained and are crawling with roaches and other pests. But this kind of lodging is often all that stands between a poor family and homelessness.

Georgia and many other states do not clearly define when hotel guests become tenants. Tenants have the legal right to contest an eviction attempt before a judge, and to continue living in the units while their cases move through the court system. This legal ambiguity leaves long-term tenants at properties like Efficiency Lodge vulnerable to quick, summary expulsions when they can’t pay.

Yet businesses like Efficiency Lodge reap all the benefits of the traditional landlord-tenant relationship – including steady rent payments – while avoiding its costs and statutorily mandated duties, such as maintaining their properties to livable standards.

Efficiency Lodge owns 15 properties in Georgia and Florida that it calls motels. But it markets itself to the long-term, weekly rental market as part of its business model. The slogan on its website is “Stay a Nite Or Stay Forever.” Its properties have been repeatedly cited for violations of health and safety codes but continue to attract tenants to their furnished rooms with inducements that include no requirement for a credit check.

“Our view is, these people have made this place their home for an extended period of time, and they should be treated as tenants,” said Lindsey Siegel, director of housing advocacy at the Atlanta Legal Aid Society and part of a team of lawyers representing the tenants.

“It’s the address on their driver’s licenses,” Siegel said. “The school bus picks one of our clients’ kids up from just outside the property. The landlord advertises the hotel as a place to live long-term. Tenants have the right to an eviction process before they are kicked out. So is this landlord, who provided rental housing to our clients, allowed to just put them out of their homes with no motive, just force them out of their homes? Or do they have to go through the courts?”

For Neason and other residents, the legal storm threatens their shelter.

Neason had been living at Efficiency Lodge since 2016. It was his only home and he paid his full $204 rent each week. The rental agreement he signed when he moved in did not include any check-out date.

But last year he was injured and was unable to work for six months. He claims in the lawsuit that a former manager at the hotel told him he didn’t have to pay his full rent during the pandemic. He says he paid what he could, but fell behind. First came a notice that the rent was due. Then, the private security guard showed up, wielding the assault rifle.

Lynetrice Preston, one of the other plaintiffs in the suit, has been living with her two teenage daughters and her grandson at Efficiency Lodge since 2018. Furloughed from her job at a parking valet service in March 2020 because of the pandemic, Preston began to fall behind on her rent after her unemployment benefits stopped.

She had been making smaller payments when she could. And then one day in September 2020, she was told that she had two days to catch up on her rent or she and the children would be evicted.

“They will lock you out,” Preston told The New York Times in December 2020. “Lock your doors if you can’t pay rent, and they don’t let you come back in and get your stuff if you are not there.”

Preston told the Times she was able to regain access to her unit after her parents helped her pay some of the overdue rent. She is now working at a chicken restaurant while the lawsuit moves through the courts.

As the Efficiency Lodge residents seek the simple security of knowing they will not be kicked out of their homes in the middle of the night again, they are representing the struggles of communities with the most to lose.

“This definitely hits vulnerable communities hardest,” Siegel said. “That includes poor communities, communities of color, people with disabilities, anyone who is a vulnerable class, anyone who’s had an eviction filed against them in the past so they have this mark on their background.

“With the housing market in places like Atlanta tighter and tighter, more people are being forced to use this sort of housing as a last resort,” Siegel said. “And if they don’t have the protection of the legal eviction process, you are asking them to live with the constant threat that their landlords could kick them out of their homes and onto the street at any time.”

Photo at top: The entrance to the Efficiency Lodge in Decatur, Georgia, is shown here on Oct. 7, 2020. Some of the residents, along with members of the Atlanta-area Housing Justice League, staged a protest across the street from the hotel, alleging that residents are being unfairly evicted and that the hotel provides substandard living conditions. (Credit: AP/Ron Harris)