When members of the so-called Greatest Generation returned home from World War II and the Korean War, most were accepted with open arms.

“The Black veterans had no place of their own,” former Louisiana state Rep. Terry Landry said. “The veteran buildings were for the white veterans.”

Excluded from white veterans halls in New Iberia, Louisiana, a group of Black veterans lobbied the parish government in 1957 to build a structure on land they had purchased and donated to the parish. They made the donation under a 1958 contract in which the parish agreed to construct the building and give control of it to a veterans board.

Fast-forward 63 years, and Black veterans are fighting to keep control of the building where their American Legion and Veterans of Foreign Wars posts have long operated.

After fighting for years to get a capital outlay project approved and completed to renovate the Robert B. Green Memorial Building – named for the first Black New Iberian killed in World War I – the Black veterans who meet there were recently told to hand over the keys.

The Robert B. Green Board of Control had long operated the building, but it is now being replaced by an advisory board that gives control of the building to the Iberia Parish Government, which has other plans for the space.

In response, the veterans have filed a petition to dissolve the land donation, leaving the future of the building up in the air as the legal battle ensues.

“New Iberia’s Black veterans returned home to the same racist ideology that they left their families and loved ones to fight against,” said Lecia Brooks, chief of staff for the Southern Poverty Law Center, which works in partnership with communities across the South and beyond to dismantle white supremacy and advance human rights. “In response, Black people were forced to create their own spaces to remember and honor contributions to a country that diminished their existence. The parish should immediately halt its seizure of this meeting hall – which is filled with Black history that New Iberians can be proud of – and return full control to the Black veterans.”

Seeking to hold on to the building, the Black veterans have lobbied the Iberia Parish Council to adjust the land-use agreement, but to no avail. 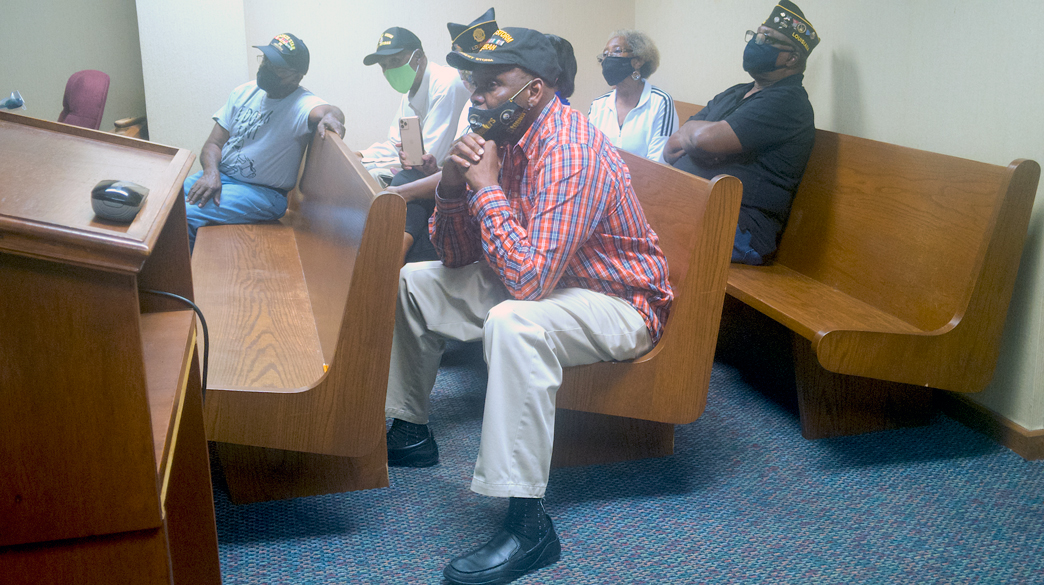 Members of two Black veterans associations in New Iberia, Louisiana, attended several Iberia Parish Council meetings earlier this year to push back against efforts to strip control of the Robert B. Green Memorial Building away from them. (Credit: Dwayne Fatherree)

“We’re not saying that we are not willing to work with the Iberia Parish Council,” said Robby Bethel, a member of the Robert B. Green Board of Control, at the council meeting where the idea of having advisory input instead of independent control of the building was introduced. “We’re supposed to work hand in hand. What we are saying is that we are not going to be bullied.”

In the mid-1950s, after Black veterans who served their country in World War II and the Korean War had returned to Iberia Parish, there were four buildings in the parish built to serve veterans. Two of them, one for white veterans and another for Black veterans, were in Jeanerette, a little over 10 miles from New Iberia down Highway 182. A third was in the town of Lydia, and the fourth in New Iberia’s City Park.

Although the racist separate-but-equal laws had recently been removed from the books, the Black veterans were not welcome in the New Iberia building.

An agreement was reached to build a new structure in the city’s more diverse West End community. A local landowner donated a parcel of ground for the facility, and the American Legion Post 533 adopted an agreement with the Iberia Parish Police Jury to have the parish provide the building.

A state attorney general opinion in effect at the time prevented the new structure from being donated to the American Legion outright, Landry said. Instead, the Robert B. Green Veterans Memorial Building was listed as a recreational facility.

“It was a dark time, but the police jury had the foresight to do it right,” Landry said. “The veterans drew up an agreement between their board and the parish government, and they both signed off on it.”

Under the agreement that American Legion Post 533 drafted and the parish police jury affirmed, the Iberia Parish Government would maintain the building, keeping it on its records as a recreational center – even though it served almost exclusively as the home for the Black veteran organizations under control of their own board.

Fred Wesley became a member of the All American Veterans of Foreign Wars Post 12065 in 2010. A member of the VFW since 1991, he transferred to the West End location, where he saw that some improvements were needed. 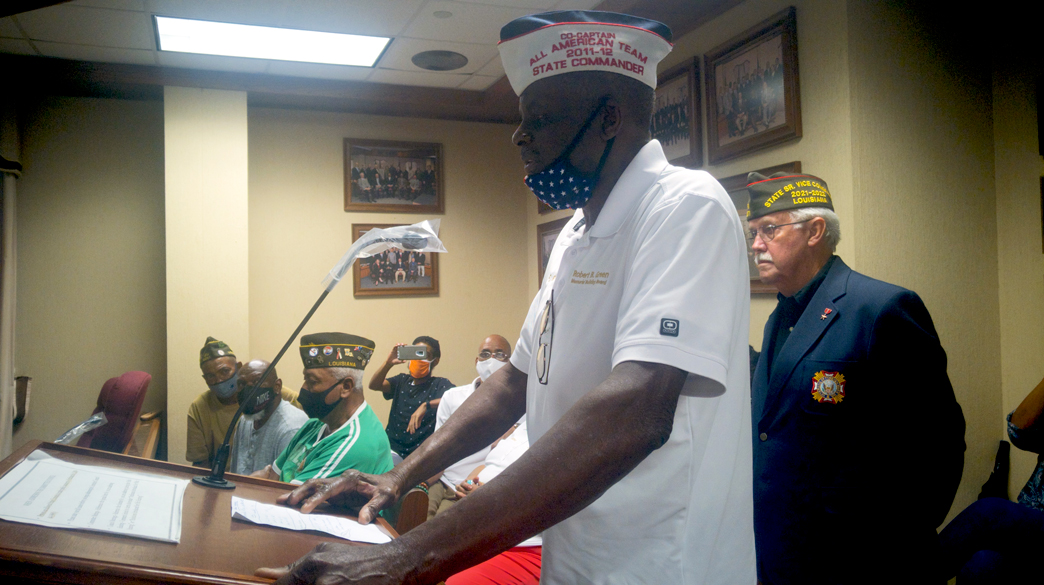 After seven years of efforts to renovate the Robert B. Green Memorial Building, VFW Post 12065 Commander Fred Wesley (center) is fighting to keep control of the building after the Iberia Parish Government abolished the veterans board that had overseen the facility for more than 60 years. (Credit: Dwayne Fatherree)

Over the previous half century, maintenance from the parish had been spotty. Parts of the air conditioners had been stolen, rendering them inoperative. Issues with the Louisiana soil, composed of materials left by the water of rivers and floods, caused cracks to develop in the cinder block walls, allowing drafts to leak cold air in during the winter and cool air out from the laboring air conditioners during summer. Water damage from roof leaks caused ceiling panels to fall, leaving open gaps.

Wesley coordinated with Landry, who was then serving his first term in the state Legislature, to identify capital outlay funds. Eventually, after years of persistence, work began on the revival of the structure.

Finally, in July, the building was reopened with a ribbon-cutting ceremony. But the members of the two organizations based there – Robert B. Green American Legion Post 533 and VFW Post 12065 – were not invited or even informed of the festivities.

Instead, the Iberia Parish Government coordinated with members of another veterans group to post the colors and conduct the ceremony.

“Fred Wesley didn’t even know it was going to happen,” Landry said. “He heard about it on the street.”

What’s more, the building’s signage was changed during the renovation, Landry said. Instead of being labeled the Robert B. Green Veterans Memorial Building, the word “veterans” was notably absent.

“Why would that be, unless there was a plan for it to not be used for the veterans?” Landry asked.

Wesley, now commander of the VFW chapter, expected to have the keys turned over to him after the event. But that did not happen. Instead, he was rebuffed on several occasions before finally submitting a written request.

“They gave me keys to use for our meeting, with instructions to bring them back after we were finished,” Wesley said. “That was after I wrote a letter and hand-delivered it. I got the key, with a note for me to bring it back by Friday. The parish government has not been in touch with me at all.”

The issue came to a head in August, when the Iberia Parish Council had an item on its committee hearing agenda to change the governing authority for all five of its veteran buildings from boards of control to advisory boards.

According to Parish President Larry Richard, himself a Black veteran, the change came at the request of groups in nearby Lydia and Jeanerette who wanted to cede control and maintenance responsibilities for their buildings back to the parish.

“We were doing this for some, so we thought we would do it for all to make them uniform,” Richard said.

“When the building was falling apart, they didn’t want it,” Bethel told the council members. “Now that we got the grants to have it renovated and restored, now they see it as a cash cow. We are good enough now that the building is repaired. But it was not good enough when it was falling down.”

At that meeting, council members agreed that the board would be allowed to continue, with an agreement to define the duties and responsibilities of the council, the parish administration and the veterans.

During a separate meeting between Iberia Parish Legal Counsel Andy Shealy and members of the Green board, board members presented a tentative plan for the operation of the building.

But at the next council meeting, the council passed a resolution creating an advisory board, ignoring the veterans’ pleas. In the short term, the parish administration said it plans to rent the facility out for private use when the veterans are not actively using it.

“When we got to the council meeting, it was a whole different ball game,” Wesley said. “We’re really confused. We don’t know why Iberia Parish Government is interested in it.”

Landry and Wesley both said they do not see the building, which might draw $200 per rental, as a revenue stream for the parish.

“As a rental, it makes no sense,” Wesley said. “They might have plans down the line to sell the facility. That’s the only thing we came up with that could benefit the parish. To this day, I don’t understand the goal.”

Even if there were financial gain to be envisioned on the government’s part, the process of taking control of the building ignores the fact that the Black veterans not only put their time into founding the memorial building, they also provided the land and history for it.

‘Do the right thing’

After the veterans enlisted attorney Charles Cravins to represent their cause, the Iberia Parish Government engaged outside counsel, hiring the firm of NeunerPate to represent its interests in the case.

Landry said he is waiting for the court to decide on the petition but has no idea what the outcome will be.

“It would be good to see someone do the right thing,” he said.

Editor’s note: Terry Landry Jr. is the policy director in Louisiana for the SPLC. He is the son of former state Rep. Terry Landry, but was not involved in his father’s work on the Robert B. Green Memorial Building or in the production of this story.