Donald Eaglin was in a quandary and didn’t even know it.

The 25-year-old Jeanerette, Louisiana, native was planning to vote on Nov. 13. But when he arrived at the Jeanerette City Hall just blocks from his home to cast a ballot – as he had in every election since he was first able to vote in 2016 – the polling place was no longer there.

“I went to town to go vote,” Eaglin said. “Then they told me I had to go to Belle Place.”

Belle Place Middle School, where Eaglin’s precinct had been relocated without his knowledge, is nearly 10 miles away.

But fortunately, volunteers with A New Chapter PUSH – a ministerial organization in Iberia Parish that helps residents exercise their right to vote – not only found out where his new polling place was but took him there, too.

“When we went to pick him up to vote, he said he voted at City Hall,” said the Rev. Wilfred Johnson, founder of the organization also known as ANC/PUSH. “We used the QR code on his registration to make sure where he was going to vote and got him there.”

The group – which also went door to door encouraging residents to vote and helped them get to the polls for early voting – had been preparing for these sorts of issues to crop up for months, ever since the Iberia Parish Council approved a consolidation of voting precincts.

The parish’s “cleaning up” process cut the number of precincts nearly in half – from 64 to 37. Under the new plan, five of the eight polling places that were closed served a higher-than-average number of Black voters, raising concerns that the move disproportionately affected people of color.

Officials say the move was intended to save taxpayers money and not to disenfranchise anyone.

But the reduction in polling places in predominantly Black areas prompted a grassroots effort by ANC/PUSH, Black Voters Matter and other groups that worked tirelessly to ensure that every voter in the parish knew where they were supposed to vote and – if necessary – provided them with transportation.

“Organizers shouldn’t have to compensate for unfair election administration and discriminatory obstacles to voting – but time and again, they shoulder that burden,” said Liza Weisberg, a staff attorney with the Voting Rights Practice Group at the Southern Poverty Law Center. The SPLC works in partnership with communities across the South and beyond to dismantle white supremacy and advance human rights.

Across the South, new voting laws have popped up like weeds, effectively choking the rights of Black and Brown voting populations.

Iberia Parish officials say that even though their move had a disproportionate effect on people of color, it was not intentional.

In 2019, the Iberia Parish Council voted in favor of a plan to consolidate precincts and polling places as a cost-saving measure ahead of the full redistricting process based on the 2020 U.S. census.

Redistricting is the process of redrawing the lines of electoral districts so that they are reflective and representative of the communities they contain. States and local governing bodies redraw these district lines every 10 years following completion of the census, which counts every person living in the United States. Every district at the same level of government must have the same total population (this rule is strict for congressional districts and slightly looser for other districts).

The principle of “one person, one vote” is embedded in the U.S. Constitution. Redistricting must also comply with the Voting Rights Act of 1965 (VRA). The VRA prohibits “minority vote dilution,” which means that redistricting plans cannot be drawn in a way that results in Black voters (or other racial or language minority groups) having less opportunity than other members of the electorate to participate in the political process and to elect representatives of their choice.

Ideally, the reapportionment process occurs every 10 years with little or no disruption. But in Iberia Parish, the delays in receiving census data due to the COVID-19 pandemic pushed back the decennial reapportionment and redistricting. That created a situation where more than 20,000 voters in the semirural Louisiana parish had their precincts changed. A large subset of that group has to vote at an entirely new polling place. 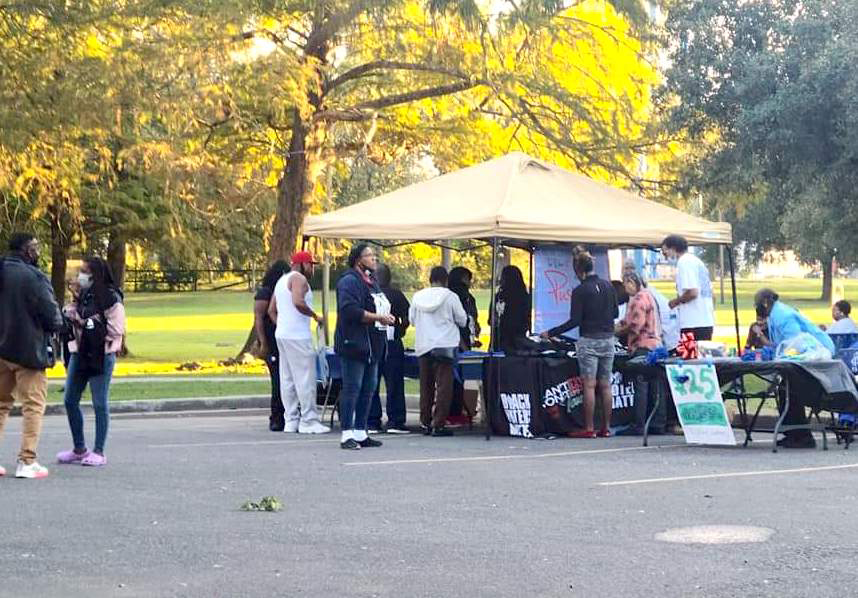 Iberia Parish residents gathered on Nov. 11, two days before the latest municipal election, for a “Get Out the Vote” rally in New Iberia’s West End Park. The rally was just one part of a grassroots effort to make sure voters knew where they were to be voting after the parish shuttered a dozen polling places and changed precincts for more than half of its voters. (Photo credit/Robby Carrier-Bethel)

“Maybe it’s normal, maybe not,” said M. Christian Green, vice president of the League of Women Voters of Louisiana. “But then when they said they were closing polls, and when we saw where the polls were located – right in the inner city, in the West End neighborhood – it raised red flags for us.”

The move also alarmed local voting rights activists who have been working for years to boost registration and participation in elections across the board, but particularly in communities of color. When residents began receiving cards notifying them of changes in polling places, an effort began to reduce the effects of the changes on the voting community.

A confluence of circumstances

Iberia Parish’s 2019 move to consolidate districts is allowed under Louisiana law to prepare for the upcoming redistricting. It is supposed to make the redistricting process easier.

But three things happened during this cycle that threw the system out of whack.

First and foremost, the data from the U.S. census that is used to create new district maps was delayed almost six months, partially because of the COVID-19 pandemic, and to a lesser extent because of the bumpy transfer of power from the Trump administration. Usually available in February, the data was not released this year until Aug. 12.

Second, several statewide ballot measures came out of the 2021 legislative session, requiring a fall election. The resignation of the New Iberia city marshal earlier this year also put a local item on the ballot to select his replacement, further complicating matters.

In normal years, these issues would not have mattered: The reapportionment would have been completed in time for the district and polling place map to be submitted prior to a fall election.

The third and less tangible force at play is the focus on redistricting nationwide. The growth of legislation – particularly in Southern states – that restricts voter access has brought a heightened interest to any steps that could be seen as a restriction on voters’ rights.

Because the data was delayed, the interim 37-precinct map was still in place when preparations were being made for the fall 2021 election.

In August, several local officials, along with ANC/PUSH and Black Voters Matter, organized a town hall at the Sliman Theater in New Iberia to find out how the changes had come about and what, if anything, they could do to remedy the situation.

Iberia Parish Clerk of Court David Ditch said he was not in favor of closing any of the polling sites.

“I’m very adamant about the fact that I don’t think we should be reducing, that’s a personal belief of mine,” Ditch said. “I think we should be increasing access. I think everyone should have the same equal opportunity to vote as close to their home as possible.”

Ditch and Registrar of Voters Kristie Blanchard both said the changes came about because of the parish council decision in 2019.

When Blanchard submitted a map to the Louisiana Secretary of State’s Office this year, the one adopted in 2019 was on the books.

In 2013, the U.S. Supreme Court gutted the Voting Rights Act’s “preclearance” provision, which previously required states like Louisiana with histories of racial discrimination to submit voting law changes to the U.S. Department of Justice (DOJ) for approval before implementation.

Without that preclearance, Iberia Parish was able to put any changes it wanted into effect, and the state accepted them.

“A sign of a healthy democracy is one where every citizen can participate in the political process. The fact that we are still fighting to remove barriers to voting means critical work remains,” said LaShawn Warren, the SPLC’s chief policy officer. “In this year alone, 19 states have passed 33 laws making it increasingly more difficult to vote. Inaction is not an option if we are to live up to our highest ideals as a democratic nation. Congress must pass both the John Lewis Voting Rights Advancement Act – which will restore the federal oversight needed to guard against laws intended to make it harder for people to engage in the political process – and the Freedom to Vote Act, which will ensure fair and equal access for voters in federal elections.”

In Iberia Parish, several civil rights and social justice groups submitted a letter to the Iberia Parish Council objecting to the closure of eight polling places, citing the disproportionate effect on Black voters.

Johnson of ANC/PUSH signed the letter, along with representatives of Campaign Legal Center, NAACP Legal Defense and Educational Fund, the League of Women Voters of Louisiana, the American Civil Liberties Union of Louisiana, and Black Voters Matter Fund. 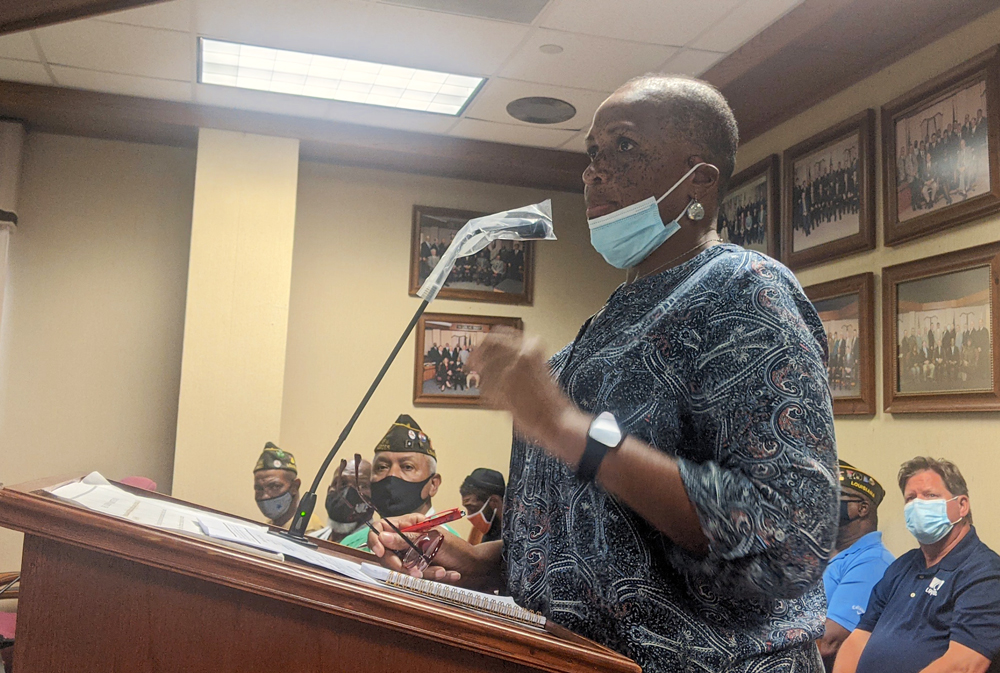 Former 16th Judicial District Judge Lori Landry, above, told members of the Iberia Parish Council that their closure of eight polling places — five of which were in districts with a higher than average number of Black voters — amounted to a disenfranchisement of the Black community. (Photo credit/Dwayne Fatherree)

“The main issue is not just precincts,” Landry said. “This move closes eight polling places, five of them in predominantly African American communities. The council is now saying it’s not wanting to close polling places, but when you voted for this in 2019, it started down this path.”

In the weeks leading up to the election, ANC/PUSH and other groups were canvassing precincts, providing support for voters throughout the early voting period.

Volunteers were canvassing for two weeks solid prior to the election, with Black Voters Matter providing logistical support in the form of the miniVAN voter canvassing app and software.

“We went out door to door throughout our precincts,” said Beanie Bonin, former head of the parish’s public defender office and an active election rights volunteer. “It was wonderful the reception we received. People were happy to see us come out to help them make sure they could cast their vote in the right place.”

Johnson said that during the early voting period, they provided transportation for 149 voters to the Registrar of Voters office, where they made up about 6.4% of the total early votes cast. Another 63 people were taken to polls on Election Day.

Overall, almost 11% of the more than 15,000 registered Black voters in the parish turned out, compared with 16% of the 29,000 white voters. These numbers are in line with turnout in previous non-presidential elections despite the poll closures.

“African American voters did turn out and made it to the polls even with the obstacles,” said Robby Carrier-Bethel, a local voting rights activist. “There is work to do to get more to the polls, but the outcome sends a strong message.”

Photo at top: The Rev. Wilfred Johnson (right), one of the founders of A New Chapter PUSH, worked tirelessly for weeks attempting to contact every voter in every neighborhood of Iberia Parish to make sure they knew where their polling place was for the Nov. 13 election. Pictured next to Johnson is his wife, Susan Johnson. (Credit: Wilfred Johnson)