On the grounds of a museum in North Carolina is the site of a fierce battle in the waning months of the Civil War, where 1,600 Black soldiers in the Union Army staged a frontal assault on entrenchments protecting the Confederacy’s last remaining open seaport, a critical link in the supply line that kept the war alive.

Until recently, there were no markers to honor the valor of the Black troops who took heavy losses in the Battle of Forks Road and paved the way for the fall of Fort Fisher in Wilmington and the end of the war two months later.

But now, as the nation continues to fight against systemic racism, and the movement to remove Confederate iconography gains momentum, these Black Union soldiers and the pivotal battle they fought are being recognized.

To honor the United States Colored Troops (USCT) soldiers who fought in the Battle of Forks Road – 80% of whom had been previously enslaved – artist Stephen Hayes created “Boundless,” a sculpture that was unveiled last month on the grounds of what is now the Cameron Art Museum, where the battle was fought over several days in February 1865.

If not for the discovery of the site in 1980 and the investigation that followed, the critical role the Black soldiers played in the assault that helped end the Civil War might have been lost to history. But now, their gallantry is memorialized in Hayes’ work. 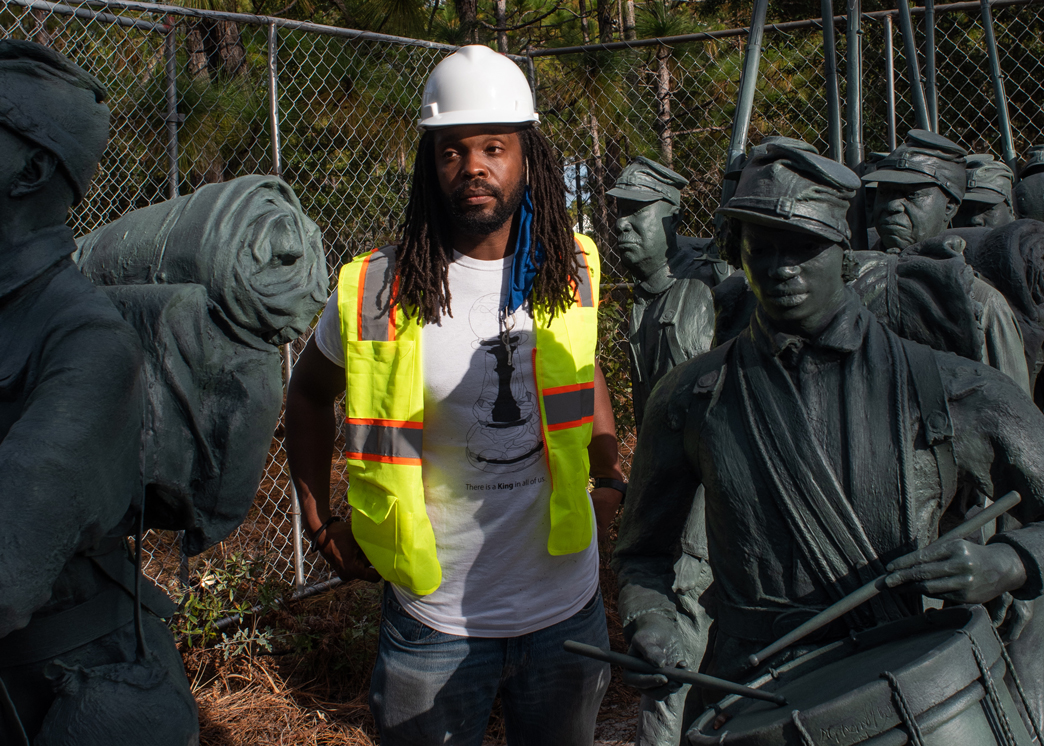 “It’s unfortunate that the contributions of the ‘Colored Troops’ who courageously served a country that devalued them routinely go unnoticed in American history,” said Lecia Brooks, chief of staff for the Southern Poverty Law Center, which works in partnership with communities across the South and beyond to dismantle white supremacy and advance human rights. “These truths of Black heroism are conveniently excluded from American history books. But Mr. Hayes’ ‘Boundless’ sculpture rights that wrong. While his piece focuses on Wilmington’s Battle of Forks Road, it also imparts stories of untold Black regiments that led Union advances during the Civil War, understanding that their survival was unlikely.”

Hayes, an assistant professor of art, art history and visual studies at Duke University, spent two years creating the life-size bronze sculpture, made in part from the casts of Black men whose ancestors are tied to the battle site and its story. Hayes told the SPLC he hopes the sculpture will help people understand the bravery exhibited by Black Union soldiers and the connection of Black history to Wilmington’s future.

“It’s not a sculpture of being worn or beaten down,” Hayes, 38, said. “It’s a message of pride, a sense of honor that I hope moves people to think about the past, present and future.”

“We knew from the beginning that we wanted this work depicting the USCT to be figurative,” said Wilson. “Stephen’s work, which navigates the narrative of agency and Black bodies in America, captivated our imaginations. We reached out to Stephen in early 2019 after looking at his work and talking with other museums across the state. It has been an honor to work with Stephen and to watch him grow over these past two years.”

Two years in the making

Hayes began his studies at North Carolina Central University, where he planned to study mechanical engineering. But after failing a math class, he was introduced to graphic design by a friend and ended up taking a ceramics course. He excelled in the medium and later obtained a residency at the New York State College of Ceramics at Alfred University before earning a master of fine arts in sculpture degree from the Savannah College of Art and Design.

From there, Hayes found immediate success. His thesis exhibition “Cash Crop” has been traveling around the country for nearly a decade and highlights the transport of African people as commodities. 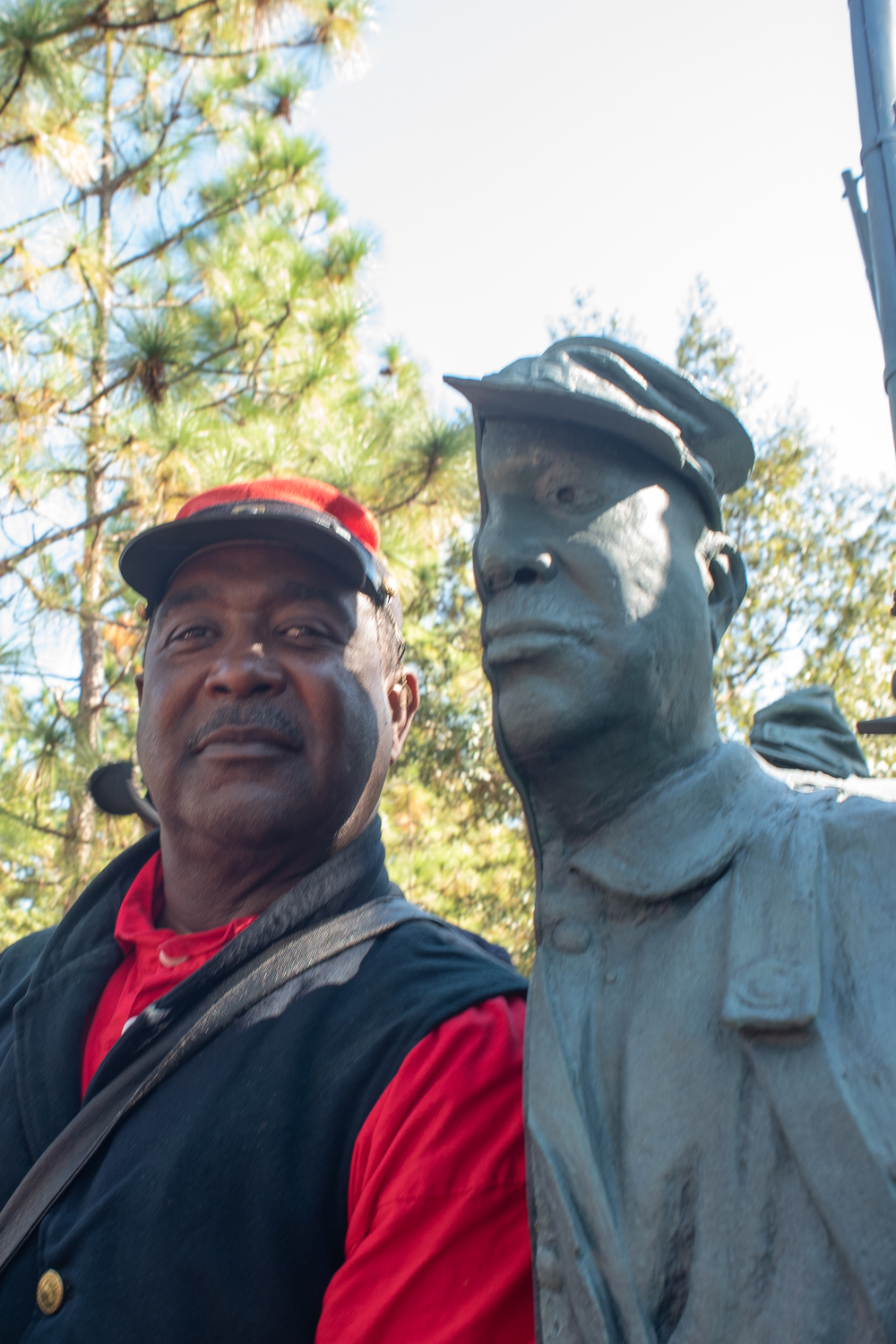 The descendants and reenactors of those who fought in the Battle of Forks Road were used as models for the soldiers featured in the "Boundless" sculpture. (Credit: Alan Cradick)

To begin “Boundless,” Hayes got in touch with the descendants and reenactors of those who fought in the Battle of Forks Road. He used their faces to create molds from which he cast faces for the 11 men standing in a line, wearing backpacks and carrying rifles as they march to battle.

“I thought about that boundless flow that people still fight today,” Hayes said of the sculpture’s name. “All of my work deals with capitalism, consumerism, brainwashing and the ideas of how the Black body is being seen today. There’s an endless number of fights that we as Black people have gone through and continue to go through, and this battle continues.”

Wilson said that art such as Hayes’ work can affect the way we think about one another and our respective histories.

“Public art reflects what we as a community value; it reflects who we are as a people, and it can impact our individual and collective identity,” Wilson said. “Stephen Hayes’ sculpture proclaims that the USCT’s story is important, is valued and is not forgotten.”

The Battle of Forks Road, part of the larger Battle of Wilmington, was largely forgotten until 1980, when local history buff and veteran Robert E. Treadwell discovered relics at the battle site and invited a friend, Civil War historian Chris Fonvielle, to help explore the area.

The America Comes Alive website provides this account: “Treadwell and Fonvielle investigated the land, and Dr. Fonvielle dug into records and maps and manuscripts to piece together what happened. Dr. Fonvielle soon saw that what they were looking at were the remains of a hotly fought battle that no one ever talked about. Given the battle’s location, he took to referring to it by the name of its road: the Battle of Forks Road. As he studied what must have happened, he saw that the Confederates were so well-entrenched that they wanted to hold on. But the Union – embodied by about 1600 U.S. Colored Troops –matched the Confederate grit and stubbornly fought to win.”

After this discovery, a housing development was planned for the site. But a local movement sprang up to preserve it, and the owner of the land, Bruce Barclay Cameron, later donated it for the construction of the Cameron Art Museum in his wife’s memory, with the stipulation that the earthworks at the battle site be preserved and the battle’s history interpreted.

Fonvielle later wrote a book about the battle, Glory at Wilmington: The Battle of Forks Road.

Hayes said the fall of Wilmington means everything to him.

“I wouldn’t be where I am today if things had turned out the other way around,” he said. “But even though we won, we are still fighting today, fighting for our freedoms. [The sculpture] will hopefully put everything into perspective for the next generation.”

Before its unveiling, Hayes did not know what to expect.

“Everybody will have a different view,” he said. “Everybody has a certain history they want to put forward. We’ve washed over certain types of history and at the end of the day, I want to see what conversations the sculpture will bring. People will have their own thoughts, but I don’t know what that will bring up.”

The turnout for the sculpture’s unveiling was greater than Hayes had expected.

Previously, it only existed as a preliminary drawing but has been transformed into a work of art that speaks volumes to the lived Black experience.

“We are overjoyed with the extraordinary response from our community to the unveiling of  ‘Boundless,’ ” Wilson said. “Visitation and attendance have surpassed our expectations.  ‘Boundless’ is vitally important to who we are and where we are going.”

Hayes said the response from the crowd of over 1,500 people through the opening weekend made him ecstatic and proud. North Carolina Gov. Roy Cooper declared Nov. 13, when the sculpture was unveiled, as United States Colored Troops Remembrance Day.

“I’m always dreaming of new pieces to create, and I hope my work changes the narrative.”

Top photo: The sculpture “Boundless” was unveiled on Nov. 13, 2021, on the grounds of what is now the Cameron Art Museum in Wilmington, North Carolina. (Courtesy of Alan Cradick)