As the first Black woman to run as a major party nominee in a general election for Alabama’s 3rd Congressional District, Adia “Dr. Dia” Winfrey learned a lot about community outreach during the course of two consecutive campaigns – even though she did not win either one.

Using hip-hop music to energize a younger Black voting base during her latest political campaign showed her that there was a desire among young voters to be involved, to have a voice in the way government worked.

As the tallies rolled in on the night of Nov. 3, 2020, the seeds of Transform Alabama, a nonprofit geared toward educating and empowering voters, were sown. Even in defeat, Winfrey and her campaign team saw that they had made an impact.

“My campaign became more about voter education than about me as a candidate, and I am cool with that,” Winfrey said. “This isn’t about Election Day. It’s about helping the public to see the importance of the electoral process, how they fit into it and the fact that your vote matters and your voice is very, very important. So we used the campaign for that.”

The newly minted 501(c)(3) nonprofit, dedicated to voter registration, voter education and political engagement, grew out of the nontraditional outreach that Winfrey used in her campaign. This included not only hip-hop music but also music videos and a call to action aimed directly at the young Black voters in her district.

“In the organizing and voting rights space, you often hear that young people aren’t engaged in the political process or are apathetic about democracy issues, but I don’t think that is true,” said Rachel Knowles, outreach paralegal for the Southern Poverty Law Center’s Voting Rights Practice Group. “Young people like myself care deeply about the future of their communities, but sometimes legacy civic engagement organizations just don’t know how to connect with us. Dr. Dia and Transform Alabama do not have that issue because they are an organization by and for younger Alabamians.”

Oscar Austin is a perfect example. He wasn’t actively political, but that changed the day he met Winfrey in 2018 while spinning tunes as a DJ for an event at Tuskegee’s Chisholm Park.

“They were putting out signs,” Austin said. “She was running for Congress, the first time. She walked up and said, ‘Y’all are really jamming. Do you mind if I introduce myself?’ ” 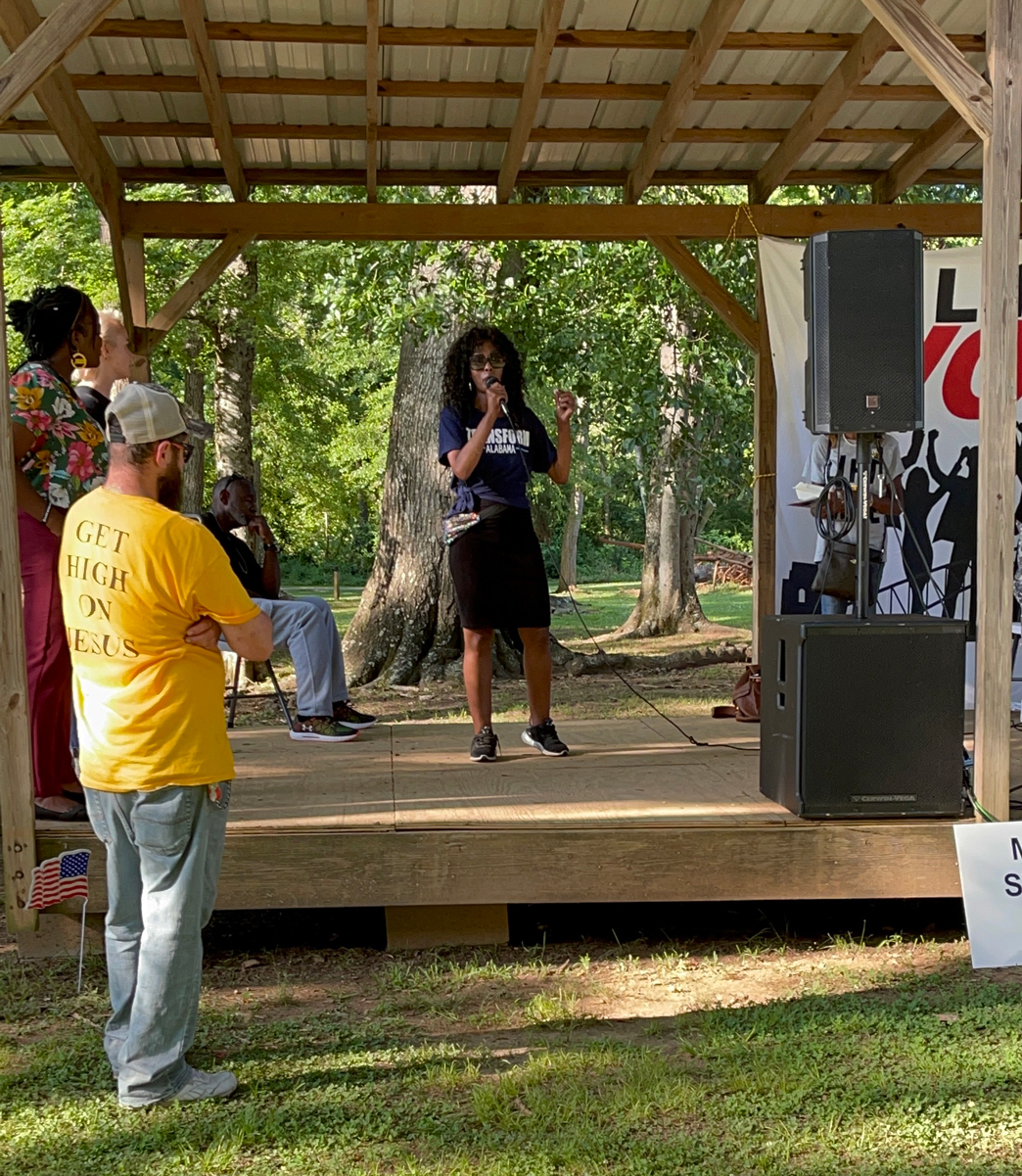 After Austin gave the mic to Winfrey so she could make her stump pitch, she said something that would prove pivotal for them both.

“You know what would be a dope idea?” she asked Austin. “What if I had my own DJ for the campaign?”

He joined Winfrey’s staff, first providing a soundtrack for her election hopes. Then he became the campaign’s media director. He also brought skills as a researcher to the team, utilizing his background as a graduate in history from Tuskegee University.

Combining hip-hop and traditional politics may seem unorthodox, but it isn’t the first time Winfrey has merged the two like a DJ mixing songs on the turntables.

She branded herself as “the mother of hip-hop psychology” after her doctoral dissertation led to a book, Healing Young People thru Empowerment (H.Y.P.E.): A Hip-Hop Therapy Program for Black Adolescent Boys, which integrated hip-hop culture with psychological theories. Transitioning her efforts and messaging from a political campaign to nonprofit outreach was organic.

“Our aim from the beginning has been getting practical political education info to as many Alabamians as we can,” she said. “We decided that operating as a nonprofit is the best way to achieve this.”

‘Bet our time is now’

She did some hip-hop music videos while working with Austin during her political campaign. Using that same medium for Transform Alabama was a no-brainer. The first clip, “Bet,” features Winfrey on location at the Edmund Pettus Bridge in Selma and Kelly Ingram Park in Birmingham.

In the video, she raps over a trance beat:

They thought they had us beat/Killing in the streets

Hip-hop is the force/The movement is the source

Pull up to the poll/There’s power in your vote

Bet our time is now/Register I show you how.

The closing couplet, “They thought they had us beat/Bet we prove them wrong,” repeats over footage of the Bloody Sunday march for voting rights across the Edmund Pettus Bridge, along with recent footage of Transform Alabama supporters crossing the bridge.

Video for “Bet” was shot on location at the Edmund Pettus Bridge in Selma, Alabama, and Historic Kelly Ingram Park in Birmingham, Alabama. (YouTube)

“By us infusing hip-hop culture in the delivery, the words and all aspects of my campaign – because that is kind of how all this came about – we found people were more open,” Winfrey said.

The first rap came out of a discussion between Winfrey and her team about a radio spot.

“I told them if we were going to do radio, I wanted to do a song, something catchy,” she said. “I didn’t want to just talk.”

She wanted to call out to the 13 counties in Alabama’s 3rd Congressional District. Although the district is the largest from a geographic standpoint, its counties are largely rural, stretching along more than half of the Alabama-Georgia line. The district has yet to support a Democrat for either president or U.S. representative in this century.

What came out of the brainstorming session was a 40-second spot that featured the “3rd District Roll Call,” a song in which Winfrey rattles off the names of counties in the district along with the election date, a disclaimer and a few dance moves from Winfrey and her four children.

“I really wanted to call out all of the counties of the 3rd District,” she said. “When I found the statistic that we had the lowest voter turnout as a district, county for county, it was almost like our voice as a district did not move the state of Alabama. If we could do a song and call the counties out by name, maybe we could get them excited and get them out to vote.”

Taking that momentum and bringing it into next year, when the midterm elections take place, is a primary goal for Winfrey.

“In 2022, we’re hoping to do some events and get out into the public more, now that things are opening up a bit,” Winfrey said. “In 2021, we were really just getting established, getting our vision, our mission and a good foundation in place.”

Already, Transform Alabama is scheduled as a partner on the 21st Annual Stop the Violence Rally in Selma on Jan. 17 (Martin Luther King Jr. Day) and the 2022 Selma Jubilee Intergenerational Hip Hop Political Summit scheduled for March 5. And, of course, Winfrey is looking for the group’s next hip-hop track.

“Every movement has an anthem, so I’m going to start meditating on the next song,” she said with a laugh. “We are working on a new song, and we are cooking up something for 2022. We always have music involved and are working on a cool campaign.”