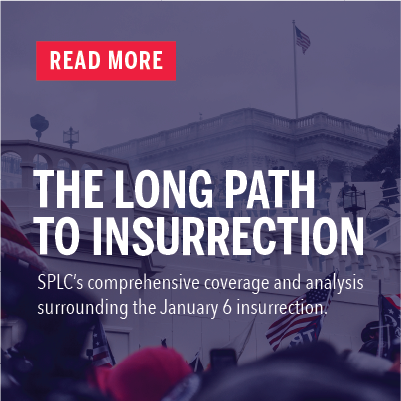 A year after the Jan. 6 insurrection, as groups across the nation mark the day with vigils to remember those killed or wounded and rallies in support of democracy, the attorney general of Washington, D.C., is busy.

Karl Racine’s office is tasked with handling the criminal prosecutions of more than 750 people charged so far in the failed coup attempt, with hundreds more still to come. His office has also filed a civil suit against two far-right extremist groups – the Proud Boys and Oath Keepers – along with more than 30 other people, for their part in inciting the violence that left more than 140 police officers injured, five people dead and close to $9 million in damage to the U.S. Capitol.

But Racine places the overall blame for enabling the insurrection directly at the feet of someone else.

“I think the story is clear,” Racine said during an interview on the eve of the first anniversary of the Capitol assault. “Donald Trump was the ringleader.”

• Video: What Comes Next? A Conversation with SPLC leader

Racine is no stranger to challenging Trump in the courtroom. Previously, his office has filed suit against the Trump Inauguration Committee and has joined on to a multistate lawsuit seeking to overturn Trump administration lending rules. He has also not been shy about his thoughts on Trump’s involvement in the events of Jan. 6. In the days after the attack, he said criminal charges against the former president were possible.

He also dismisses the idea that the violence on Jan. 6, 2021, was unexpected. Instead, Racine posits that the desecration of the seat of democracy was a goal.

“[T]he red flags were yelling, screaming,” Racine said. “Anybody who tells you that it was an intelligence failure isn’t telling you the whole story. It was intentional. [T]he president of the United States wanted the insurrectionists to keep going until others prevailed on him to stop it.”

In addition to the inaction in responding to the attack, Racine points to Trump’s teasing and promotion of the event in the months after his loss to Joe Biden in the 2020 presidential election.

“Don’t take my word for it,” Racine said. “Let’s go back. What did Donald Trump say in November and December of 2020? ‘Come to Washington, D.C. It’s gonna be really wild.’ He kept advocating and encouraging folks to come to D.C., and they got going themselves with chatter.”

He also pointed to the difference in security efforts for the Black Lives Matter protests in June, which were in large part peaceful, and the anemic security precautions prior to Jan. 6.

“That’s why he got National Guard from an overwhelming number of states that have Republican governors to come to Washington, D.C. That’s why he got Homeland Security police, wardens of federal prisons … and ICE officers to dress up as if they were going to war against nonviolent protesters back in June of 2021.”

Trump’s actions before and during the insurrection were far different.

“The common denominator, Donald Trump, was in charge of protecting our freedom and democracy on Jan. 6,” Racine said. “He appeared at a rally on Jan. 6, lying again right to the people who came here to support him, and said, ‘We’re going to march to the Capitol. I’m going to march with you.’ But cowards don’t march. They go back to a safe place.

“And then he let it go on until he sent a feeble email and a video calling these insurrectionists ‘patriots’ and asked them to go home.”

Despite Racine’s views about Trump’s culpability, getting a case before the courts is a matter of law.

“Proof in law is tricky and hard,” Racine said. “Accountability is necessary, and I’m really focused on bringing the necessary accountability to everyone without regard to position, title or office.”

The deeper effect of the disinformation and polarization that the Trump camp ramped up after his election loss is the erosion of voting rights across multiple Republican-controlled states.

“Our democracy is in the fragile zone,” Racine said. “We know that’s true because you have numerous states that have decided to restrict access to voting. They claim it’s for voter integrity. Well, we know that in the over 70 cases in which Donald Trump and the Republican Party sought to claim the election that they lost was because of fraud, the courts threw them out, including the United States Supreme Court. That’s why it’s called ‘The Big Lie.’”

Racine said he hopes that some sort of healing or reconciliation can take place, even though many Trump followers continue to disagree with the fundamental facts.

“Good Republicans have lost their ballast, their sense of honor, integrity and fidelity to our country’s values,” Racine said. “We’ve got to work hard to bring them back in the fold. Or else, we’re going to lose our freedom.”

Top Photo: District of Columbia Attorney General Karl Racine speaks about an announcement related to the Jan. 6, 2021, attack on the Capitol during a press conference at House Triangle on Capitol Hill in Washington, D.C., on Dec. 14, 2021. (Credit: Sipa USA/Alamy Live News)