On pedestals a mile apart in Montgomery, Alabama, two sculptures rise into the air. The first, about 8 feet tall, is a traditional bronze statue of the so-called “father of modern gynecology,” a physician named J. Marion Sims who in the 1840s performed experimental surgeries on enslaved women with neither consent nor anesthesia in the name of medical progress.

The second just went up in September. Almost twice as high as the Sims statue – and that is no coincidence – it uses steel, shards of glass and discarded metal objects to depict, in searing, intimate and bold detail, Anarcha, Lucy and Betsey, three of the women whose bodies were mutilated by Sims. Its title, “The Mothers of Gynecology,” stands as rebuke and reckoning.

The two sculptures are just a short walk from each other. But they represent an understanding of history that could not lie at any further remove. And while the Sims statue, erected in 1939, stands on public ground at the Alabama State House, the Mothers of Gynecology monument is the concept and creation of one bold Black woman who cobbled together the money for it out of her own savings and private donations.

The Southern Poverty Law Center recently granted $50,000 to Michelle Browder, the artist who created the monument and who has ambitious plans to construct around it a center for education, art and discussion about Black women leaders, women’s health and a broad array of issues surrounding civil rights, activism and social justice.

The grant was one of five awarded by the SPLC to support the work of museums, monuments and cultural centers devoted to Black history. In addition to Browder’s project, the recipients are the Zora Neale Hurston National Museum of Fine Arts in Eatonville, Florida; the Thiokol Memorial Project in Woodbine, Georgia; the Fannie Lou Hamer Civil Rights Museum in Belzoni, Mississippi; and the Cecil Williams South Carolina Civil Rights Museum in Orangeburg, South Carolina.

The SPLC has also commissioned artwork for billboards honoring each museum. The billboards will be displayed along highways near each museum throughout February in celebration of Black History Month.

“If there’s a father of gynecology, there must be a mother,” Browder said. “This is our legacy, in all its pain and all its strength. Why aren’t we talking about the mothers and what Black women have contributed to this country for the past 400 years?”

The grant will help Browder get people talking.

Inspired by an article in The Washington Post about Alabama’s use of state tax dollars to support museums that honor the Confederacy without providing the same level of support to museums honoring Black history, the SPLC enlisted the help of members of Congress to identify deserving institutions.

Largely overlooked for funding and support by the governments and arts commissions of their states, the institutions supported by the SPLC all seek to breathe air into the ignored spaces of American history where Black men and women – their accomplishments, their struggles and their humanity – have long been kept from view.

“It is critically important that we preserve these parts of our history that are not in the history books, that are not taught in schools but that need to be told,” said U.S. Rep. Terri Sewell, whose congressional district includes Montgomery and who identified the Mothers of Gynecology project to the SPLC. 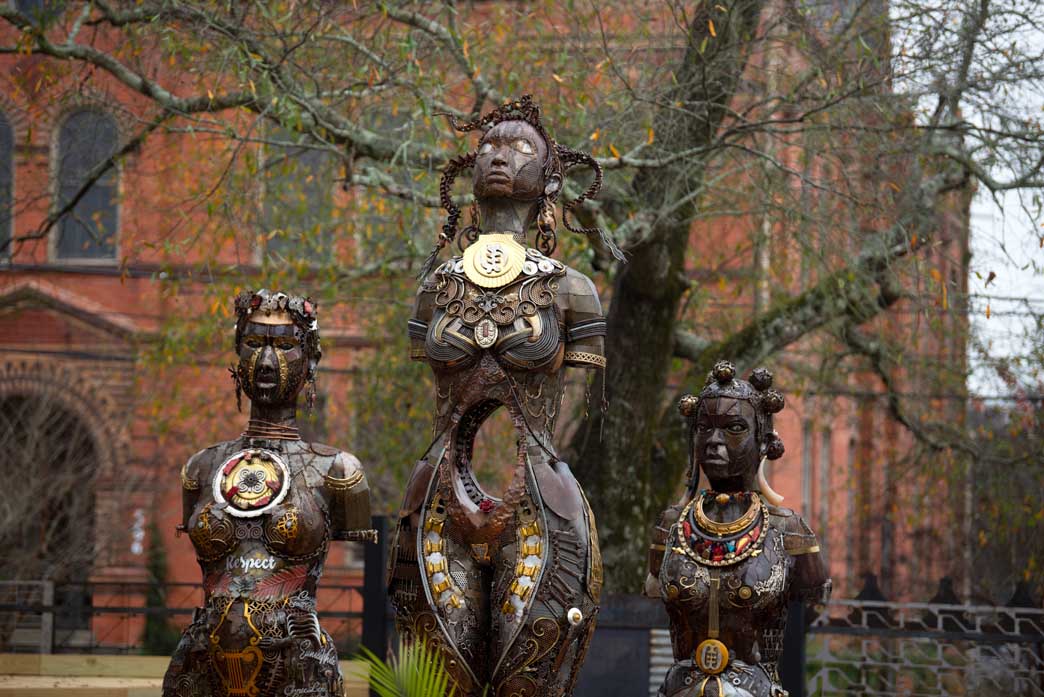 The Mothers of Gynecology monument in Montgomery, Alabama. (Credit: SPLC)

“Often what we see is what state-sponsored history wanted us to see,” Sewell said. “And in the Deep South, that is often unfortunately the Confederacy, and not Black history. We are replete with amazing spaces and places that deserve to be preserved and their story told. And so, it is backing by groups like SPLC that is needed to tell not just ‘his story,’ but her story too, as well as the stories of all the voices that have been muted by history.”

Across the United States, but especially in the South, the disparity is immense between the recognition and funding given to museums, monuments, parks and historical archives on the Confederacy and those that depict the 400 years of Black history on U.S. soil. Of the 95,000 entries in the National Register of Historic Places, only 2% reflect the experiences of Black people. While dozens of Confederate memorials have been taken down around the country since 2015, the SPLC estimates that more than 2,000 Confederate parks, museums and other honorary structures and spaces remain.

What’s more, right-wing politicians and interest groups are increasingly pushing back against any attempt to change the traditional historical narrative. Teaching about racism and bigotry in public schools has been decried by conservatives who have in some places banned the discussion of inclusive education, also known as “critical race theory,” and removed books from curricula, many of them literary classics, they say cast aspersions on white people. School board meetings have become increasingly contentious, with many nonpartisan school board members faced with threats of intimidation and physical violence by right-wing groups.

“The reason there is this visceral reaction to movements like Black Lives Matter is because people are walking around with their eyes closed to the lived experience of Black and Brown people in this country,” said SPLC Chief Policy Officer LaShawn Warren. “These museums are so important because they open people’s eyes to this history that is clearly there.”

In Alabama, as in many other states, the inequities play out in funding disparities. The Alabama Historical Commission, the state’s main historical preservation institution, says it directed some of its $1.3 million in funding last year to “African American projects.” But small museums around the state that honor the history of the civil rights movement, the contributions of enslaved people and the victims of enslavement, such as Sims’ experimental subjects, operate entirely without government funds.

Meanwhile, The Washington Post reported that one museum, the Confederate Memorial Park in the little town of Mountain Creek, Alabama, receives more than $600,000 a year in taxpayer dollars. Its dedicated revenue stream was established by the Legislature and codified in the state’s constitution.

As for monuments like that honoring Sims, they are not going away anytime soon.  In 2017, Alabama Gov. Kay Ivey signed legislation barring the removal of monuments that have been on public property more than 40 years. Pending legislation in Alabama would be even stricter, increasing the penalty for removing monuments from a flat $25,000 to $5,000 a day.

That protects the statue of Sims, who was not an Alabama native, only worked in the state for a few years and has been unseated from his perch as a gynecological pioneer by recent scholarship. The procedure he has been credited with – repairing an abnormal opening that sometimes forms between the bladder and the wall of the vagina as a complication of childbirth – is believed to have been conducted by Sims in a dangerous manner. And instruments credited to Sims, including the speculum, had already been in use before his experiments took place. Following protests, a statue of Sims was removed from New York’s Central Park in 2018.

Since 2017, the nonprofit Alabama African American Civil Rights Heritage Sites Consortium has been trying to address the funding inequities. It is working with 20 historical sites across the state, helping them build capacity and raise needed capital. Still, over four years into the project, all the consortium’s funding has come from out-of-state institutions.

“Black history is a page of American history, and without its full telling the story is incomplete and inaccurate,” said Priscilla Hancock Cooper, director of the consortium. “But the problem is not just in Alabama. Alabama is reflective of the national trend of what’s going on in our country in terms of the lack of information about African American history and culture, in everything from textbooks to archives.”

Across the border in Georgia, similar disparities have museums dedicated to Black history scraping for funds. Among them is the Thiokol Memorial Project in the small town of Woodbine, where founder Jannie Everette says “our backs were up against the wall” before the $50,000 grant from the SPLC “gave us breathing room.”

Everette founded the project in 2015 to raise awareness of the 1971 explosion at the Thiokol Chemical Plant that took the lives of 29 workers, predominantly Black women. More than 50 others were injured, among them Everette’s mother, who suffered serious burns. The explosion was one of the worst industrial disasters in U.S. history, and it was caused by the federal government’s misclassification of explosive material that was being used to make trip flares for the Vietnam War. But its history is largely unknown. It is still not taught even in local schools.

Everette said the chemical plant had changed lives by providing well-paying jobs to Black workers but then became the scene of tragedy and lifelong wounds that have never been fully acknowledged.

“She never forgets them,” Everette said of her mother’s memories of the co-workers she lost that day. “And she just feels America forgot them. They were helping our boys in Vietnam. They were so proud, because this was their opportunity to help, that’s the way they saw it. They deserve to be honored and remembered.”

Since 2013, Everette has dedicated her life to unearthing the history of the Thiokol disaster. Her efforts at fundraising, researching and building a community of volunteers have borne fruit. Today the museum has space in an office building where it displays more than 350 artifacts of the Thiokol plant era. They produce an annual booklet and are working with local filmmakers on a documentary series called “Remembering Woodbine.” Children tour the museum regularly.

Over the past seven years, the museum has received grants of more than $14,000 from the Georgia Council of the Arts. But with an operating budget of between $26,000 and $36,000 per year, it runs largely on donations and volunteers.

“Funding from the SPLC means everything,” Everette said. “We just had a meeting in August where we took a vote on whether we should close our doors and leave.”

Everette said she plans to use the grant to install a sound system in the museum that would allow visitors to hear the voices of people who lived through the disaster, to upgrade displays and to erect a sign on the outside of the building for the first time. The grant will also help fund further research and work with local schoolchildren.

For all the institutions, the grants are designed to be just a start.

“Part of the theory behind the grants was to provide a greater level of visibility to these institutions, particularly from political officials, and to encourage other partners to donate,” Warren said. “We believe that will give them the kind of uplift they need to get donations and expand their reach.”

Top picture: The SPLC commissioned artwork by Mark Weaver for billboards honoring each of the five museums — from left, The “Mothers of Gynecology” monument in Alabama; the Fannie Lou Hamer Civil Rights Museum in Mississippi; the Zora Neale Hurston National Museum of Fine Arts in Florida; the Cecil Williams South Carolina Civil Rights Museum in South Carolina; and the Thiokol Memorial Project in Georgia — throughout February in celebration of Black History Month.