Crossing the historic Edmund Pettus Bridge in downtown Selma, Alabama, this week, the woman with the bullhorn shouted: “Show me what democracy looks like!”

“This is what democracy looks like!” answered back a crowd of thousands taking part in the annual Selma Bridge Crossing Jubilee event that commemorates the anniversary of “Bloody Sunday” on March 7, 1965. 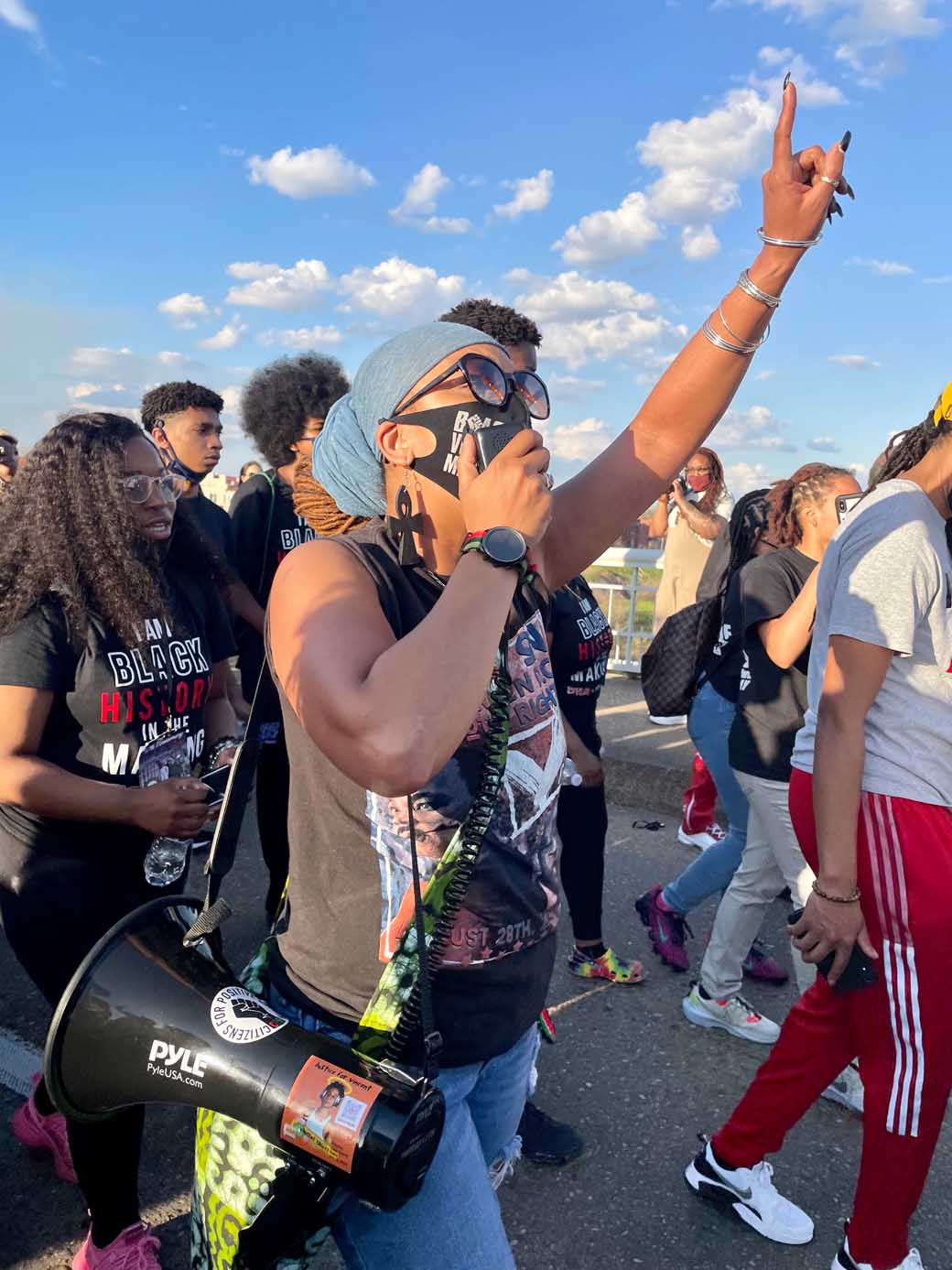 A woman with a bullhorn leads the crowd in chants as they make their away across the Edmund Pettus Bridge during the annual Selma Bridge Crossing Jubilee event Sunday, March 6, 2022, in Selma, Alabama. (Credit: Liz Vinson)

On that day in history, voting rights activists led by the late congressman John Lewis were brutally beaten by white state troopers and sheriff’s deputies, some on horseback, as they tried to cross the bridge on a march to Montgomery to demand voting rights for Black people.

The marchers were turned back that day. But the violence outraged the nation and thousands of activists poured into Selma to join the campaign, culminating in the completion of the 54-mile march at the steps of the Alabama Capitol 18 days later and the eventual passage of the 1965 Voting Rights Act.

As the nation commemorates the 57th anniversary of Bloody Sunday this week, activists are fighting a slew of voter suppression proposals making their way through state legislatures.

The Southern Poverty Law Center has joined that fight through litigation, advocacy and support for grassroots organizations that work to protect the right to vote.

Margaret Huang, president and CEO of the SPLC, led a group of SPLC staffers who participated in the Jubilee and joined the march on Sunday.

“The SPLC has joined this Jubilee for many, many years, but this year it feels more potent, more important than ever,” she said. “The attacks on our voting rights … make this march so much more meaningful this year. There are many people in the political arena who are worried about retaining power, and I think they see the country is changing. They see communities of color turning out [to vote] in new and exciting ways, as well as young people, so their instinctive response is to shut it down to protect their political future.”

As people mobilized to cross the bridge, the sound of drums echoed down the street. Many people carried banners featuring John Lewis with the slogan, “Protect Our Vote.” 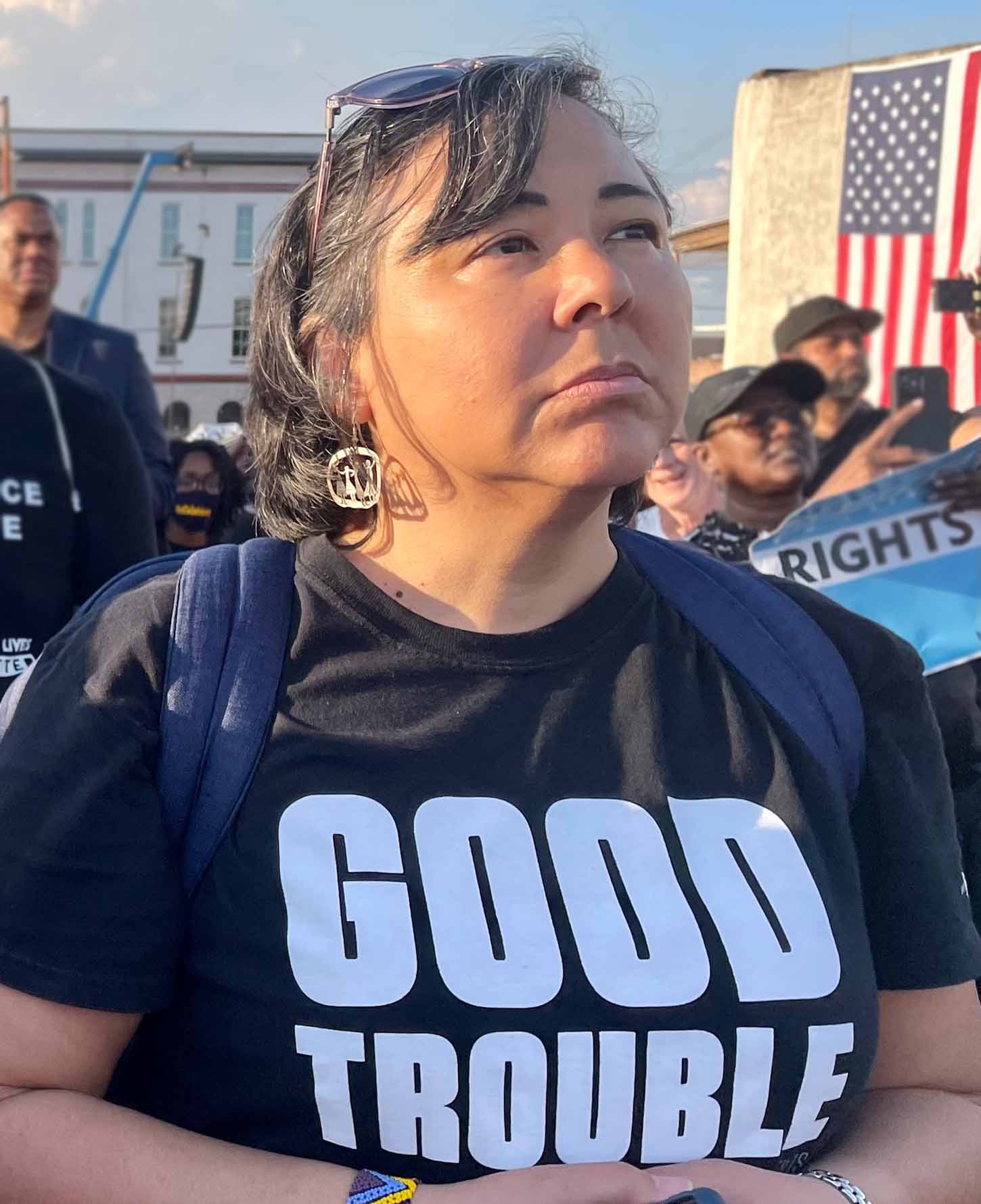 Jerome Dees, the SPLC’s Alabama policy director, was among the SPLC staffers who attended the Jubilee.

“This march is important because it is an annual reminder for us of what we’re constantly fighting for,” Dees said. “We’re facing an onslaught of voter suppression legislation, but we can’t rest on the laurels of the civil rights movement of the 1950s and 1960s. The march signifies the ongoing struggle and steps we need to take to ensure democracy is preserved for Alabamians and all Americans. We’re seeing a dedicated attack on stripping voting access primarily from minorities, so this event reminds us that the fight for the right to vote is still firmly in place.”

Since the gutting of the Voting Rights Act in the U.S. Supreme Court’s Shelby County v. Holder decision in 2013, Alabama legislators and officials have employed various tactics to suppress the vote, such as purging eligible voters from the rolls and implementing photo identification laws. These measures have made it increasingly harder for people in Alabama to register to vote and cast a ballot.

In 2017, Alabama passed the Definition of Moral Turpitude Act, which helped clarify state policies for restoring voting rights to people with felony convictions. The law re-enfranchised many, but Alabama still disenfranchises thousands of people who owe fines, fees and restitution, or who are on probation and parole. The state also requires that eligible voters with convictions complete an additional application process to exercise their voting rights.

And across Southern states, bills like HB 2 in Alabama have the potential to make the right to protest a criminal act, stripping Americans of their First Amendment rights.

“The SPLC is here because we think this is a very important moment,” said Brock Boone, a senior staff attorney with the SPLC. “This is an important moment today, like it is every year, to remember Bloody Sunday. Today, not only are voting rights under attack, but the right to protest is at stake, so if there is ever a time we should be protesting or standing up for voting rights, this is the time.”

The day was wrapped in an aura of excitement as a diverse crowd of demonstrators held signs with slogans that included “Muslims for Black Lives,” “Hindus for Black Lives” and “Black Voters Matter.”

In support of Black lives and the right to vote, the SPLC’s Patrick Martin, education coordinator for the Civil Rights Memorial Center, wore a shirt reading, “White Silence is Violence.”

“The whole point of having white privilege is being able to acknowledge it and use that as a voice for people that are often marginalized,” Martin said. “Having that privilege and not using it is really adding to the effects of systematic racism in the U.S., and we should use our voice to make a difference, like we are today.”

‘Still in a fight’ 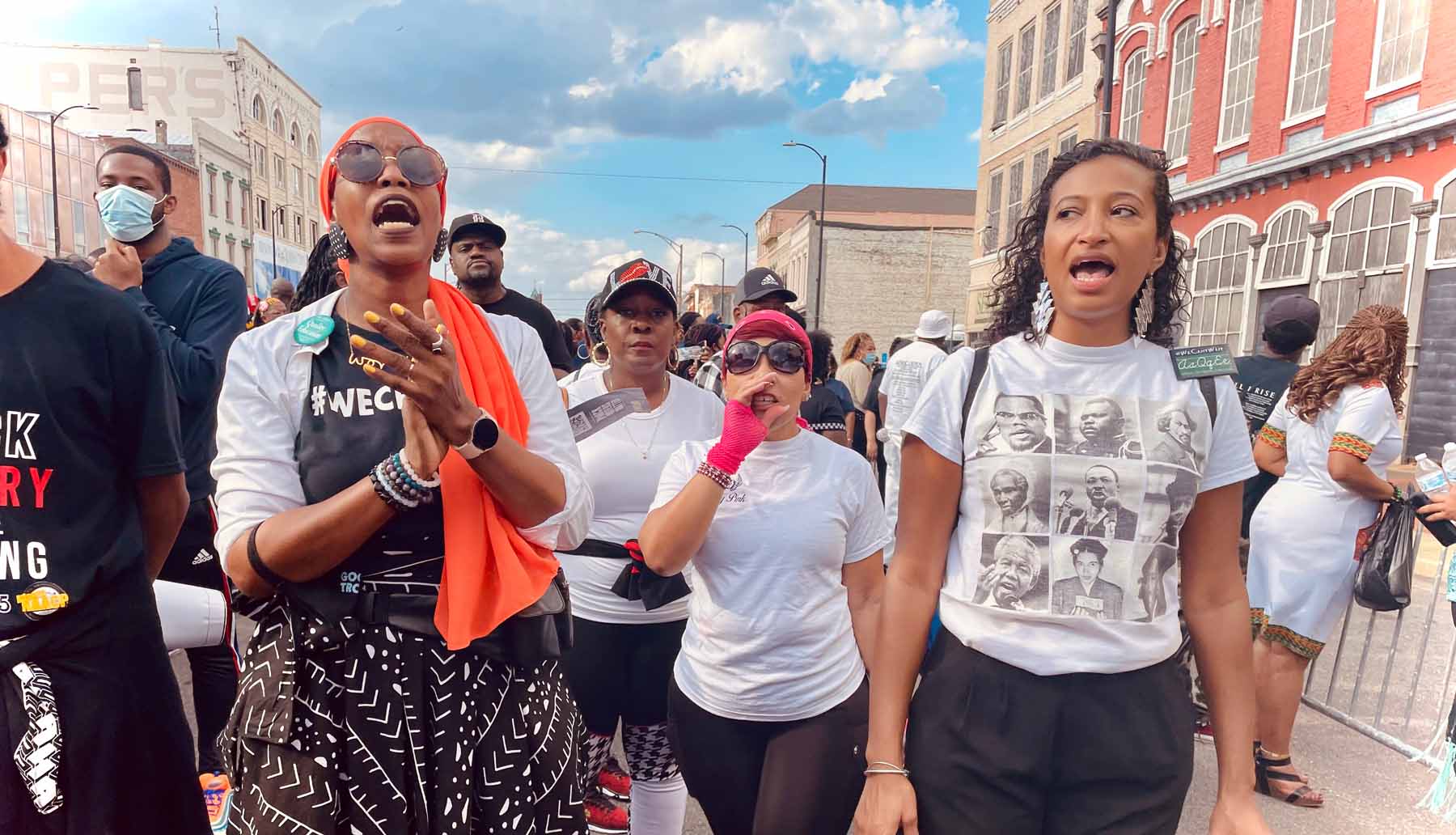 “Today, we stand on this bridge at a different time,” Harris told the crowd. “We again, however, find ourselves caught in between. Between injustice and justice. Between disappointment and determination. Still in a fight to form a more perfect union, and nowhere is that more clear than when it comes to the ongoing fight to secure the freedom to vote.”

At one point, the crowd began singing, “We Shall Not Be Moved,” an anthem of the civil rights movement, before voting rights leader William Barber, co-chair of the Poor People’s Campaign: A National Call for Moral Revival, declared, “Selma was not about a day but about a movement.”

Huang said she hopes the energy and passion of the day will carry forward as activists battle voter suppression and racial gerrymandering.

“This is about making the change that we need happen sooner and with greater support from all of us,” she said. “We need people to recognize both their responsibility and their right to vote. Events like today’s really help remind people why that right is so valuable and what it means.”

Huang said the SPLC remains committed to fighting for ballot access in the courts and state legislatures.

“We are bringing allies and partners to the table, and we’re monitoring the way that white supremacists and white nationalists are invading our political space. We are working hard to make sure that their hate doesn’t affect elections,” she said. “The truth is, we are seeing a real growth in the political power of communities of color who are multiracial, multi-religious, multi-ethnic. This collective growth means that political dynamics are changing.

“White supremacy has always been about ensuring the white population stays in power, stays on top. And that is going to change in the future if we all work together.”

Top picture: The crowd makes its way across the Edmund Pettus Bridge in Selma, Alabama, during the Selma Bridge Crossing Jubilee event on Sunday, March 6, 2022, to commemorate the 57th anniversary of Bloody Sunday. (Credit: Liz Vinson)