Sometimes the open hand of history reaches down through the ages, grabs onto unwitting messengers and erupts in riveting artwork that becomes the perfect symbol for an entire people’s suffering – a eulogy to human tragedy beyond comprehension. Picasso’s Guernica comes to mind.

The statue will be unveiled today at the Southern Poverty Law Center’s Civil Rights Memorial Center (CRMC) in Montgomery, Alabama.

Rising 16 feet tall and weighing 750 pounds, the Blank Slate Monument has three connected figures that capture the excruciating history of African Americans, from enslavement through the Civil War and the civil rights movement. A fourth figure, a young child, is borne on his mother’s back and gazes upward to represent hope for a better future.

The statue’s emotional power derives from its sculptural dynamism coupled with a naturalistic depiction of its figures. We can read suffering in their eyes, hear cries and moans from gaping mouths, feel the folds in clothing and the strained muscles beneath.

The Blank Slate Monument is also an interactive, technical tour de force that transforms willing spectators into active protesters. Wi-Fi housed within the sculpture, in concert with a cellphone application, enables onlookers to post messages on the statue’s interactive placard screen. In this way, spectators can unburden their own emotional scars by expressing their feelings, hopes and dreams for a more just and equitable future.

“The timing of the exhibition couldn’t be better. It coincides with Confederate History Month and Confederate Memorial Day on April 25 and follows the re-opening of the CRMC after COVID,” said Lecia Brooks, SPLC chief of staff and culture and founding director of the CRMC.

The story of how the Blank Slate Monument came to be is as inspirational as the statue itself.

In December 2018, a social justice and blockchain enthusiast who uses the name Rana Ahmed on social media was having a spirited discussion with a wealthy friend in New York City over Confederate monuments. More than 2,000 such monuments and other kinds of iconography remain in the United States, according to the SPLC’s most recent survey, Whose Heritage?

“‘What kind of country celebrates traitors?’ I asked my friend,” Ahmed recalled. “I said they had to come down. My friend said, ‘That’s not how dialogue happens. The answer is more art.’”

When the conversation veered to the subject of freedom of speech, Ahmed’s friend called it “the best virtue of a free society.”

“So, I said, ‘OK, Mr. Freedom of Speech, you build something that represents the other side [of Confederate monuments].’ And that’s how it came to be. He said he would put the money behind it.” (The donor wishes to remain anonymous.)

In its earliest conception, the two envisioned a Black version of the common Confederate equestrian statue, but with a Black rider. The monument would be permanently exhibited at a museum, they imagined, perhaps in Birmingham, Alabama, because of its rich civil rights protest history.

Ahmed called her good friend Elkhair Balla, a Morehouse College graduate, to discuss finding the right artist to execute the monument. Balla had seen Akoto-Bamfo’s devastating 2018 outdoor installation of seven shackled, life-size figures titled Nkyinkyim (a journey) at the National Memorial for Peace and Justice in Montgomery and immediately knew he wanted him to be the sculptor. Through Balla’s Morehouse alumni network, he quickly connected with the artist.

“A month later we were on a plane to Accra, Ghana, to meet with him,” Balla said.

He recalls “going on and on about the problem of Confederate monuments” in the United States over their first dinner meeting, all the while Akoto-Bamfo was sketching.

“I didn’t have to explain anything to him about them. He was already ahead of me.”

Kwame Akoto-Bamfo first garnered international attention in 2017 with his controversial installation commemorating Ghana’s 60th anniversary of independence from colonial rule. The work, exhibited as Faux-reedom, consists of 1,200 heads representing Ghana’s enslaved ancestors. His reputation grew further with Nkyinkim in 2018 and then in 2020 with My Francophone Brother, exhibited in Germany. To date he has created some 7,000 individual sculptural pieces that explore the scars of the African and African American experience.

“I am an artist and activist and educator,” said Akoto-Bamfo, 39. “I use African heritage to empower Black people, Africans, and to heal Africans. In the African way of life, we don’t separate the community from the individual. By attempting to view the plight of Black people, I attempt to heal myself. It’s a two-way process.

“The Blank Slate is my contribution to the pain of my Black American siblings. It’s not to relive the African American experience. I want to take on racism. It’s a problem for everyone with Black skin. The Blank Slate Monument is a call to action for me by using art, to realize that living conditions of Blacks in America and in the world – racial justice and equality – is a human rights issue.”

As the creative team assembled, the concept for the sculpture crystallized. Akoto-Bamfo thought the sculpture should be interactive to deeply engage spectators and provide a “counternarrative [to Confederate equestrian monuments] to do justice to the original idea,” he said.

His idea for the mother figure to hold a bullhorn – a common symbol of protest – morphed into a placard with a sliding, exchangeable paper card that spectators could write on. The sculpture’s four figures came from deep within an imagination immersed in African heritage.

“I pick the emotions to depict what I want to tell,” said Akoto-Bamfo, who uses human models from his Accra community as a realistic springboard.

“I will work through the emotions I feel. I’ll videotape myself, take photos of myself to have a reference for my model. I’ll put myself in the position to experience the physical part of the emotions. I can’t really feel what a lynched person feels, but I put myself in the position to refine what I feel. Yes, crouching on the ground, to be in a noose, to be gagged. All of that.” 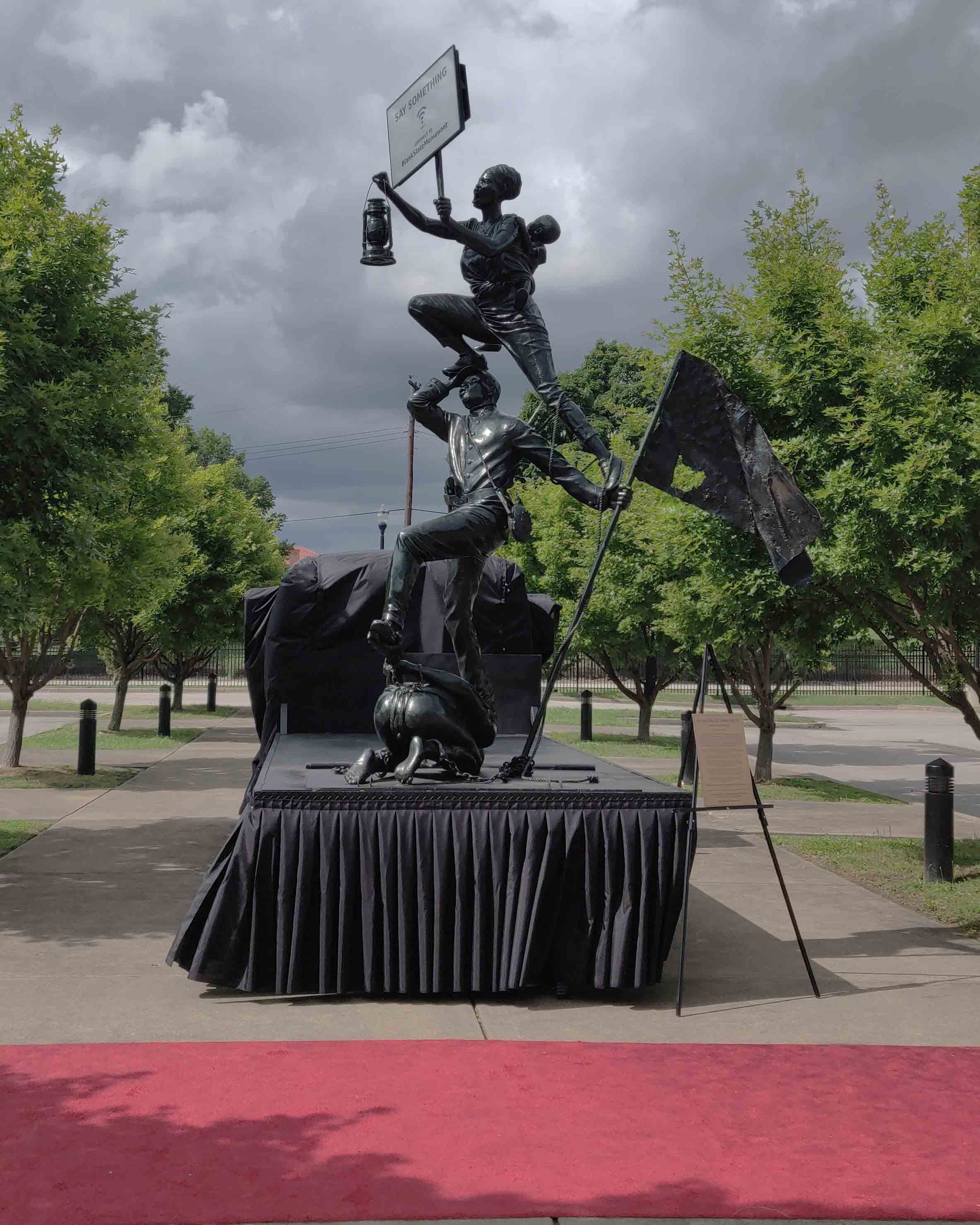 The Blank Slate Monument shows a mother and child being supported by a Union soldier and an enslaved person. (Credit: Motherland Media)

Akoto-Bamfo finished the sculpture in 12 months, and it arrived in the U.S. in late 2020 after a series of COVID-related delays. Balla had been unable to secure permits for the statue’s permanent placement at a museum or on public land, so it sat for months in a storage crate in an Atlanta warehouse.

Meanwhile, Brendan Burke joined the creative team. His task was to solve the formidable challenge of making the 750-pound resin and fiberglass statue moveable so it could tour. Burke’s technical wizardry mounting large-scale art fabrication and installations, designing interactive lighting, computer software, theater sets, high-end store interiors and in film and photography has been on display at the Burning Man Festival, Bonnaroo and Coachella music festivals and in music videos for fashion designers such as Tommy Hilfiger.

“They wanted to use this powerful piece as a rebuttal against Confederate monuments,” Burke said. “So, the idea was hatched to display it guerrilla fashion, to juxtapose it without permission in front of the monuments the SPLC listed on its Whose Heritage? survey. Balla was told it was impossible to make the statue mobile, so they called me in because I have a diverse skill set, and I like to push myself in new directions.”

Balla called Burke, who lives in Brooklyn, “a genius.”

Burke realized that the statue, which had no base, was too heavy for guerrilla installations where it might topple onto people. He also rejected the idea of placing the 16-foot statue upright on a truck, where it would be too tall to clear roadway bridges and telephone wires.

Burke devised a plan to lay the statue down on a truck bed and use a custom hydraulic armature to raise and lower it. When the statue went on display, the entire truck, including the armature, would be covered with a custom-made, black theatrical stage skirt so that the concealed truck would appear to be the sculpture’s base – but not the colossal kind usually supporting Confederate statues.

“Kwame’s idea conceptually is, instead of being a ‘pedestal of privilege,’ of wealth and power of the figures, the Blank Slate figures don’t have power or wealth, so the figures have to lift each other up,” Burke said. “Confederate monuments are intimidating. The Confederate generals the monuments celebrate look down on others. With the Blank Slate, the people stand atop each other to get higher together, to speak truth to power.”

Burke agreed with Akoto-Bamfo’s vision for the slate to be interactive, and with his background in interactive design, he suggested creating the digital placard where spectator messages would appear on screen in 30-second intervals. Participants can even choose custom fonts that resemble protest signs from the past. And if more than one spectator sends a message at a time, a digital queue forms.

Messages have included “We shall overcome,” W.E.B. Du Bois quotations and many honoring Breonna Taylor’s June 5 birthday during the monument’s exhibition the first week of June 2021 at the Kentucky Center for African American Heritage in Louisville, Taylor’s hometown. When the monument’s exhibition in New York City’s Times Square coincided with the June 25 sentencing of Derek Chauvin, the monument’s team posted the digital message “22.5 Years,” reflecting Chauvin’s sentence.

For Akoto-Bamfo, witnessing the emotional responses of spectators in the 12 American cities where the monument went on display before arriving in Montgomery has not been easy. Unveilings have been both celebratory and solemn. Many cry as they gaze upon the statue, remembering a loved one’s life cut short or derailed by police brutality: the mother of a son stomped dead by a corrections officer in 1999 who came to Louisville; grief-stricken friends of Breonna Taylor; those who note the uncanny resemblance of the statue’s crouching, chained bottom figure to George Floyd, who was murdered by police before Akoto-Bamfo created the sculpture.

“I’ve experienced this for a long time, but inside me I have a hard time handling the emotions of people who are broken down by my work,” the artist confided. “The team tries to shield me, because having to see so many women and children crying, that for me is the most challenging. That’s the part people miss when it comes to African issues of enslavement. You may weep, take a smile for the camera, then weep more. The camera only captures the one moment in time when you have to put up a smile. You can’t show the whole Black experience you have gone through in the face of racial injustice. There are wins for us, triumphant moments I compare to the one smile, but the journey may be unbearable.

“Sometimes people forget that I am Black and that I live in a country with the highest number of slave dungeons, castles and forts in the world,” Akoto-Bamfo said. “There is no escaping the colonial legacy in Ghana.”

Although the statue never made it in front of a Confederate monument as once planned, Elkhair Balla and Rana Ahmed foresee an expansive future for it that includes as many digital versions as there are Confederate symbols still standing today – 2,089 of them, according to the SPLC’s latest Whose Heritage? survey.

“When we first started, we joked and called it the Confederate Pride Monument,” Balla said. “Now we call it the Blank Slate Movement.”

Photo at top: Preview of the Blank Slate Monument, set to be unveiled on April 12, 2022. (Credit: Hillary Andrews)