“I’m 62, and that land was my grandmother’s,” Williams said of his property on Confederate Rest Road. “It probably came to her from her mother. It was passed down to my daddy, and when I am gone it will probably go to my niece.”

The question facing him is what his heirs will be able to do with the land in this small, coastal town that stretches along Mobile Bay. Williams and other Black property owners in the southwestern portion of Baldwin County are facing a renewed attempt to apply zoning and development standards on property that has existed, largely without any restrictions, in the unincorporated areas of the county.

An election held in December 2020 seemingly approved those standards, creating Zoning District 19. However, at least two lawsuits have been filed contesting the election on a variety of grounds, from the lack of notification about the vote, to tactics used to suppress Black voter turnout, to gerrymandering of the zoning district to target Black homeowners.

The result is an impending legal battle involving a mix of voting rights and land use issues that will shape the future of the Black community in this area — an enclave that has been spared the high-end home construction Williams has watched spread along the Alabama coast.

Overall, the situation in Baldwin County illustrates an important feature of our electoral system, according to Melvina Ford, interim chief legal officer for the Southern Poverty Law Center, which is not involved in either lawsuit.

“Elections impact every facet of our lives — including how and whether we continue to live on land we own,” she said. “All elections must be fair, equal and accessible. The December 2020 zoning election appeared calculated to deter and diminish Black voter participation and, ultimately, to make it harder for Black people to call Point Clear home.”

If the zoning election stands, it will usher in new guidelines and standards for structures and improvements on Williams’ land and that of his neighbors. Roads and buildings that were good enough under the previous rules will become nonconforming uses, meaning they could not be expanded or rebuilt without first coming into compliance with the new regulations.

The home and office on Williams’ property would have to meet all the applied zoning regulations if he ever wants a permit to make improvements on his land. The same would go for the property of his other family members farther down Ponder Road, where two mobile homes are located. What’s more, any future construction would have to comply with subdivision regulations, and lots would have to meet the county standards. 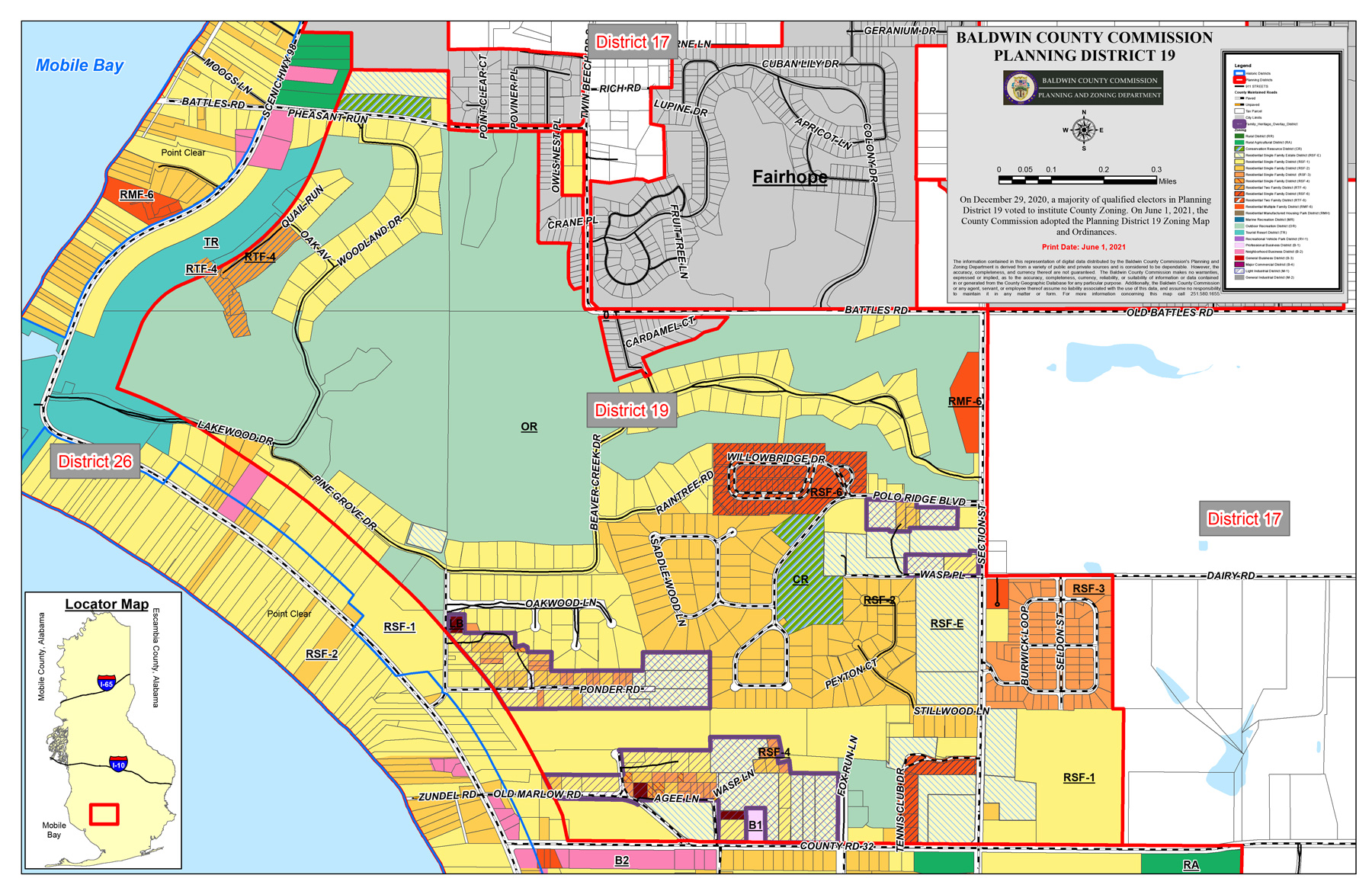 Willie Williams’ property near Ponder Road in the city of Point Clear, Alabama, lies on the lower portion of the new District 19 in Baldwin County. It would have to meet all the applied zoning regulations if he ever wants a permit to make improvements on his land. Click on the map to zoom. (Credit: Baldwin County Commission)

The effort to create a new zoning district to encompass portions of Baldwin County south of the city of Fairhope goes back more than a decade. The county administrator who shepherded through the latest effort attempted a similar measure in 2006 when he was the county’s zoning administrator.

That effort landed in court because the proposed zoning district did not follow the lines of the county’s voting precincts as required under Alabama law. Instead, the lines extended beyond voting Precinct 10 to include a larger percentage of white voters.

“Two commission members lost their seats after that one,” Williams said of the voter backlash.

The same argument — that the zoning district does not match the voting precinct, as required by law — is being raised against the latest attempt to create a new zoning district. In this case, however, the proposed zoning district is smaller than Precinct 10.

A separate lawsuit filed last year by two residents claims the votes cast in favor of the new zoning district were insufficient to meet the state requirement, passed in 2010, that the county needs a majority of the qualified voters in a proposed zoning district to approve its creation. Here, only 42% of the voters living in the proposed zoning district voted in favor of creating the district. The lawsuit highlights other issues, including a failure by the county administration to notify members of the Black community that an election had been scheduled.

“Many if not most of the African American qualified electors in District 19 did not receive notice of the zoning election,” according to the filing.

Reflecting on the vote, Williams said county officials purposely set the election on Dec. 29 — the middle of the Christmas break — to suppress voter turnout.

Another point of contention was the use of a church sanctuary — rather than a church community hall — as the polling location. The location was “highly irregular and inappropriate,” according to the lawsuit brought by two residents. “Some African Americans chose not to vote because they were shocked and intimidated by the election being held in the church’s sanctuary. Normally, if not always, elections are held in a church’s community hall or center, not the sanctuary where people worship God.”

An issue of due process

While there is no shortage of contentious zoning issues in communities across the nation, the dispute in Baldwin County is unique.

“This issue is not so much about zoning as the due process of creating a zoning district,” said Jordan Yin, an assistant professor of community and regional planning at Alabama A&M University in Huntsville and the author of Urban Planning for Dummies.

Those arguments make the two currently filed lawsuits more in line with voters’ rights cases than true land use litigation. In a lawsuit filed by lawyers for the Teachers’ Retirement System of Alabama (TRS), they claim that TRS was not notified of the election.

As the owner of the Lakewood Golf Course, TRS argues that the imposition of zoning restrictions without notice will deprive the organization of the right to create new residential areas and simultaneously make its current golf club a nonconforming use.

“This effort to intentionally discourage Black participation in the voting process potentially violates longstanding non-discrimination protections under the U.S. Constitution,” according to the TRS complaint. “Here, the long history of the Black community’s resistance to zoning, coupled with the unusual and extra-legal steps taken to circumvent that resistance, provide troubling evidence of a potential constitutional violation.”

The best way to create workable standards and to achieve buy-in from the community is to do it as part of a comprehensive plan for development, not as one-off districts, Yin said.

“It needs to be part of a conversation, like ‘Here are the community’s expectations for the future and here is how we get there,’” he explained.

That sort of discussion did not occur in Baldwin County.

“When land use is implemented right, people are generally happy,” Yin said. “When it is done wrong, it can be so hard to untangle the knots.”

In the meantime, the Baldwin County Planning and Zoning Department is continuing to create land use designations and maps for Zoning District 19 even as the legal challenges make their way through the courts.

As for Williams, he is continuing to raise awareness and funds to help maintain the fight against the zoning effort. He also has an eye over the horizon for whatever new challenges may threaten to push Black families off their land.

“This is not going to stop,” Williams said. “They got developers sandwiched up against those high-priced homes on the coast. Point Clear is the only place left where they can really build those high-dollar houses. The problem for them is that Black families rarely turn over their property. That’s our generational wealth that we pass on from one generation to the next.”

Top picture: A dock in Point Clear, Alabama, where a legal battle involving a mix of voting rights and land use issues will shape the future of one Black community. (Credit: Carol M. Highsmith/Buyenlarge/Getty Images)