Asian Americans have faced an unrelenting barrage of hate since the COVID-19 pandemic began. Horrific attacks on elderly people, women and Asian-owned businesses have traumatized communities suffering under a drumbeat of taunts, harassment and threats.

But a movement is rising in response, and it’s personal. Asian American leaders working to end discrimination and societal inequity are exposing the hatred by speaking out forcefully about its roots, creating new ways of tracking racialized attacks and discrimination and directing concerted efforts to aid victims.

As members of a community that has endured generations of racist rhetoric, often in pained silence, they are also telling their own stories. Their hope is that by sharing how their own experiences shaped their consciousness of racism and led them to chart paths to help stamp it out, they will increase understanding of a problem with deep roots in our society.

One such leader is Margaret Huang, president and CEO of the Southern Poverty Law Center.

The storied organization is a catalyst for racial justice in the South and beyond to advance the human rights of all people. The SPLC is responding quickly to this new threat, working with AAPI communities and organizations, adding its legal and organizing weight to their efforts to stem the tide of racial hate. 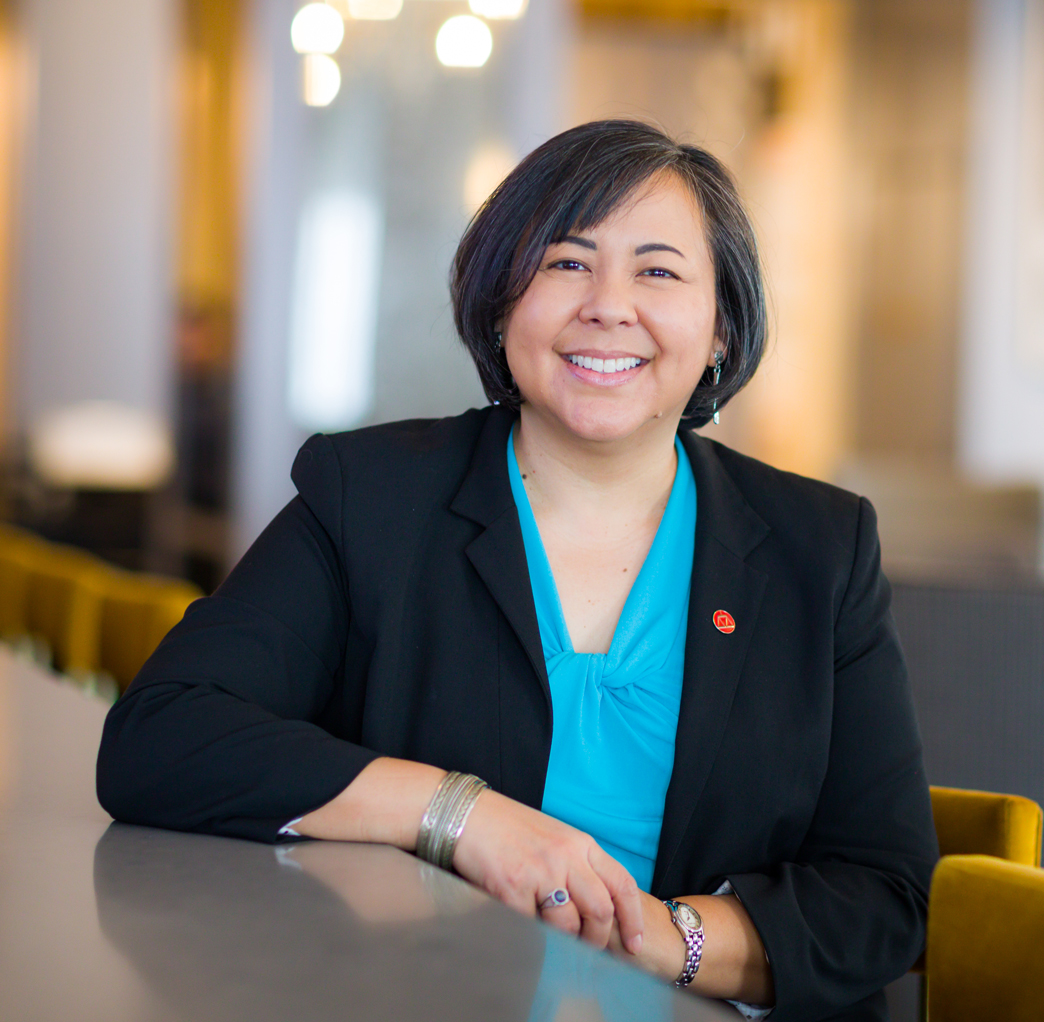 “People are starting to recognize the political power and opportunity that the Asian American and Pacific Islander community has,” Huang said. “The AAPI community has, to a really impressive and significant extent, organized to respond to this crisis. But this crisis is part of a larger challenge of white supremacy, which is raising its head at this moment. And we’re only going to be effective at countering it in the AAPI community if we are aligned with all of the other communities who are under threat. That means creating programs that actually focus on community resilience and prevention, helping children and families understand how our civic processes can help them and helping people understand why hate is so harmful.”

In recent interviews, Huang, along with John C. Yang, president and executive director of Asian Americans Advancing Justice - AAJC, decried the steep rise in hate crimes and bias incidents against AAPI communities but emphasized the significant ways those communities have organized, in many ways for the first time, to respond to the crisis. Across the country, community groups are delivering groceries to elderly Asian Americans, volunteering to accompany them on errands to ensure their safety and creating neighborhood watch systems and support groups.

The efforts come from every quarter of the community. As a case in point, on March 25 a coalition of Asian American theater artists and musicians established a fund to disburse car service or taxi fare to AAPI artists who feel unsafe on New York subways. More lastingly, Asian American leaders are encouraging political awareness and engagement in civic life, establishing hotlines and sophisticated databases to report hate incidents and crimes, and reaching outside their communities to educate society at large. 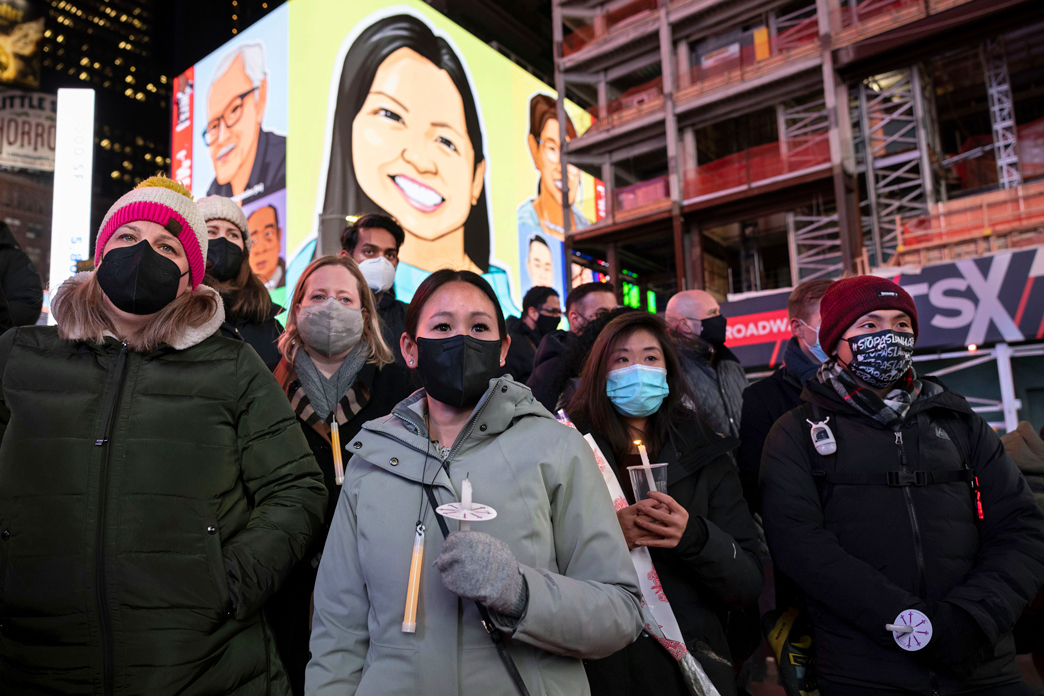 Participants hold candles during a vigil at Times Square in New York City on Jan. 18, 2022. The vigil was in honor of Michelle Alyssa Go, who was killed in a subway attack. (Credit: AP Photo/Yuki Iwamura)

Just how harmful the hate has become is startling. In January, Michelle Go, a 40-year-old woman, was pushed in front of a New York subway train to her death. In March, a 67-year-old Asian woman was punched more than 125 times in Yonkers, New York. Earlier the same month, a man punched and elbowed seven Asian women in the face in a matter of two hours in Manhattan. And a month earlier, 35-year-old Christina Yuna Lee was followed into her New York apartment and killed.

The SPLC, the nation’s leading organization in monitoring hate groups, does not track individual acts of hate. But it has given advice and guidance to organizations that do. One, the Stop AAPI Hate coalition, documented almost 11,000 hate incidents against people identifying as Asian American and Pacific Islander from March 19, 2020, to December 31, 2021.

Another report, from the National Institute on Minority Health and Health Disparities, a division of the National Institutes of Health, found that members of minority groups were more likely to report instances of being harassed or threatened than white people during the pandemic and situations in which other people treated them as though they might be carrying the disease. People of Asian ethnicity reported the highest rates of being taunted by racist comments, insults, threats and name-calling related to COVID-19.

The report found that 30% of that group had experienced such discrimination, while 44% had seen people act fearful around them.

Huang called the series of comments directed against China by former President Donald Trump after the COVID-19 virus emerged “a very clear instigating factor in the rise of hate and violence directed against the AAPI community.”

“All of those attempts to stigmatize an entire nation and people for the pandemic that was spreading across the world were embraced by a lot of his followers and a lot of others who have just been deeply hurt or concerned by the pandemic,” Huang said. “So, nobody was surprised when these incidents started increasing.” 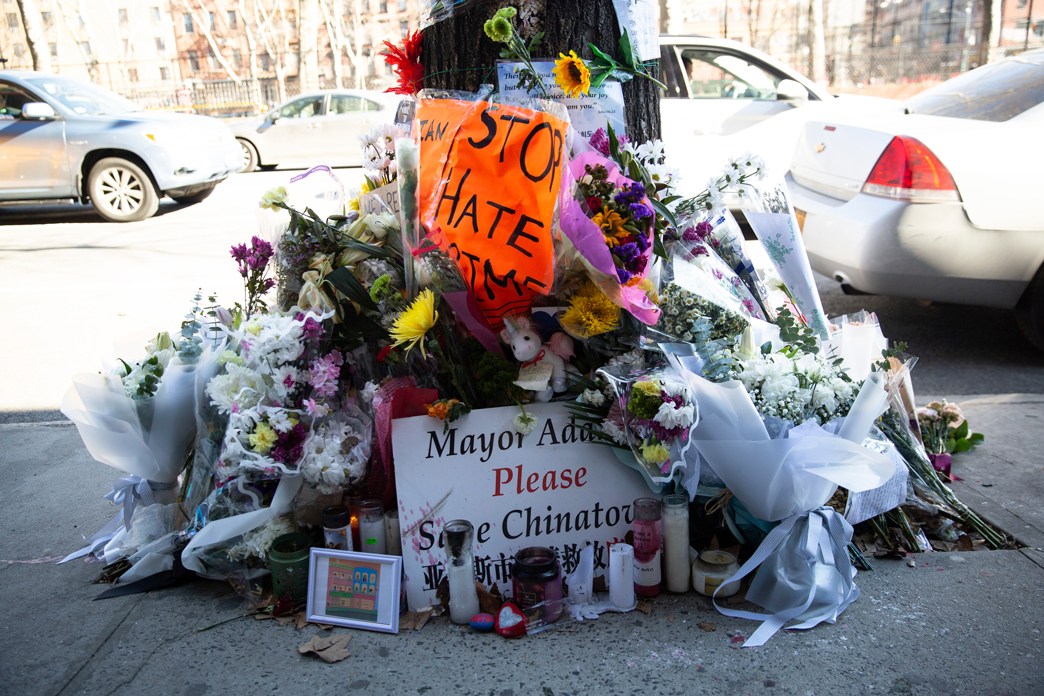 A memorial to stabbing victim Christina Yuna Lee stands outside of her Chinatown apartment in New York City on Feb. 20, 2022. (Credit: Karla Ann Cote/NurPhoto via AP)

The spike in anti-AAPI hate over the last few years is also rooted in racist stereotypes endured by generation after generation of Asian immigrants to the United States and their descendants.

“Violent attacks, these or others, always emerge from a bigger background of hate,” said Nate Schenkkan, who as deputy director of research for the SPLC’s Intelligence Project monitors the radical right in the United States. “We see these violent attacks as outgrowth of the way in which political leaders have targeted the Asian American community, especially in recent years.”

Yang, of Advancing Justice - AAJC said that historically, every time tensions rise between the U.S. and governments in Asia, a backlash against the Asian American community results. The national nonprofit also tracks hate incidents through StandAgainstHatred.org.

“That’s true whether during World War II and the backlash that led to the incarceration of Americans of Japanese descent, or in the 1980s, when an individual of Chinese descent was murdered in Detroit because of a backlash concerning the auto trade war between the U.S. and Japan at that time,” Yang said. “So, we’ve seen this in the past, and this is the most recent episode of foreign tensions creating a backlash against Asian Americans.” 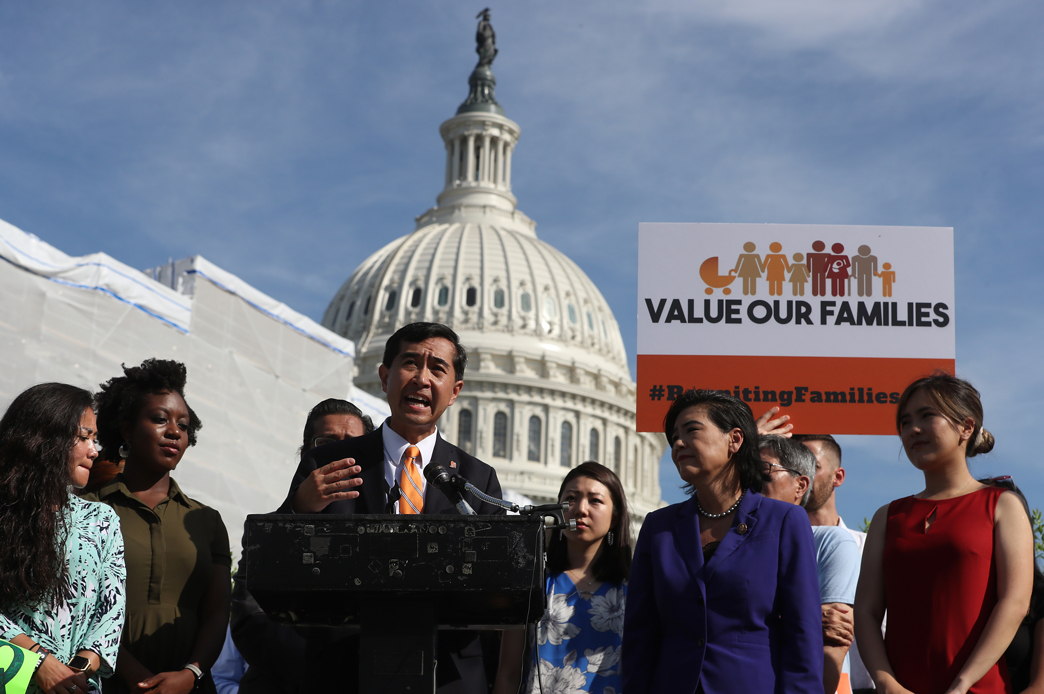 Huang said that her own experiences with racism mirror the experiences of many Asian Americans, especially women. She grew up in Johnson City, a small community in East Tennessee. The child of a Chinese immigrant father and an American-born mother, she said that as a girl she endured taunts and constant challenges to her identity.

“I was othered constantly,” Huang said. “No one ever believed that I was from the United States, much less from Tennessee. They would ask, ‘Where are you from? No, no, I mean, where are you really from? Where were you born?’... and it was also people frequently saying, ‘Wow, your English is so good!’ You just get a very consistent message that ‘you’re not from here. You’re not part of our community.’”

Despite the taunts, Huang said it was when she was living in Washington, D.C., after college that she felt physically threatened. One night, she recalled, when she was out with a friend, two older white men “started attacking me verbally and then threatening me physically,” their threats laced with sexual connotations.

Huang said that since the pandemic began, she has also been fearful for the safety of her aging parents and aunts and uncles.

“It’s been very personal,” Huang said. “I’ve been deeply concerned, and we’ve had conversations about whether it is safe for my 83-year-old father to walk outside, or whether he should go with someone else.”

Yang, a prominent attorney who served in the Obama administration before taking the helm of Advancing Justice - AAJC, grew up near Chicago as one of the very few Asian Americans in his schools. He said he was marked by childhood memories of racist remarks, intentional or not. In high school, a math teacher, exclaiming at Yang’s facility with numbers, asked, “Do you use an abacus at home?”

More searingly, Yang recalled that in seventh grade he was participating in a game in math class that involved solving one math problem to move on to the next.

As he solved a problem at one point, he said, the teacher described his success by using a word that refers to a link in the chain of problems. But the word is also considered an ethnic slur against people of Chinese descent.

Yang said he believed then as now that the teacher was unaware of the racial overtones of his remark. But he remembers the reaction. His classmates giggled, tittered and gasped.

“As you might imagine, as a seventh grader in a class with, I don’t think, a single other Asian American, it was so downright embarrassing and humiliating,” Yang said. “Even to this day, every time I talk about it, I choke up a little bit.”

The point of sharing such stories, Yang said, is that “it’s not a far step from that sort of stereotyping to real vitriol or real attacks.”

Both Yang and Huang said that to combat the biases that lead to such remarks, even among people who would not be considered racist, society needs to find ways to better educate people of all backgrounds. Society at large needs to stop objectifying and sexualizing Asian American women. And political leaders need to not only stop engaging in, but denounce, rhetoric that targets the Asian American community.

Until progress is made in that direction, “We’re not coming together around a sense of unity and purpose. We’re actually being pushed further apart by fear,” Huang said. “And that is, I think, the intention of the people who are promoting this kind of horrific behavior, to induce fear and paralysis. But that’s what we have to overcome with our work at the SPLC. We have to use the knowledge of what is happening out there, the data and the research and the outreach, to bring us all together to fight back.”