Five years have passed since white supremacists from across the country converged in Charlottesville, Virginia, to protest the city’s decision to remove a statue of Confederate General Robert E. Lee.

The vision of an estimated 1,000 white nationalists marching at night with tiki torches chanting “Jews will not replace us!” is seared into our memories from the first day. On the second day, the “Unite the Right” rally turned violent and deadly, as extremists fought in the streets with counterprotesters. A car driven by a neo-Nazi sympathizer plowed into a group of peaceful counterprotesters, killing Heather Heyer and injuring dozens more.

Now – five years after Charlottesville, 19 months after the deadly Jan. 6 insurrectionist attack on the U.S. Capitol and three months before pivotal 2022 midterm elections – the danger posed by the mainstreaming of extremist beliefs and the threat of political violence is clear and present. It is a good time to chart the progress that’s been made, as well as the setbacks.

Far-right extremism has been mainstreamed

The attempt to bring white nationalist ideas into the mainstream that manifested in Charlottesville has continued unabated – and has perhaps accelerated. An alarming number of leading elected officials now embrace the movement’s false conspiracy theories and promote former President Donald Trump’s lie that he lost the 2020 election only because of massive voter fraud engineered by Democrats.

Though the mainstreaming of far-right extremism certainly did not begin with Trump’s presidency, there is no doubt that his racist, antisemitic and xenophobic words and actions helped create a permissive climate for hate. For example, we saw a dramatic spike in violence against the Asian American and Pacific Islander (AAPI) community following Trump’s vilifying language at rallies and at news conferences about the spread of COVID-19, calling it “Wuhan flu” and “Chinese virus.” Earlier, soon after the 2016 election, the Southern Poverty Law Center documented what we called the “Trump Effect” across the country – a surge of incidents involving racial slurs and symbols, bigotry and the harassment of Black and Brown children in the nation’s schools during and after Trump’s campaign.

The SPLC’s annual Year in Hate and Extremism report, released in March, documented a third straight year of declines in the number of hate and antigovernment extremist groups operating across the U.S. We concluded, however, that the threat from these groups was not actually diminishing; rather, extremist ideas were now embraced more openly in the mainstream, increasing the threat of politically motivated violence.

We saw this play out starkly on Jan. 6, 2021. Dozens of members of hate groups have been arrested in association with the Capitol attack. The vast majority of people who took part in the insurrectionist violence, however, were not associated with a specific extremist group, demonstrating just how deeply hate and antigovernment narratives have penetrated the political right.

A recent poll jointly conducted by the SPLC and Tulchin Research provided more evidence. We found that the white nationalist “great replacement” narrative, which apparently motivated the alleged white supremacist who murdered 10 people at a supermarket in Buffalo, New York – as well as numerous other domestic terrorists – has become thoroughly absorbed into mainstream politics. In fact, two-thirds of Republican respondents in our survey agreed with the statement that the country’s demographic changes are being orchestrated by “liberal leaders actively trying to leverage political power by replacing more conservative white voters.”

In addition, more than a third of respondents said the country’s changing demographics are a threat to white Americans and their culture and values. Twenty percent think threatening a politician is acceptable, and nearly a quarter of respondents approve of assassinating “a politician who is harming our country or democracy.”

Speaking out against hate and extremism

In his April 2019 campaign announcement video, Joe Biden referred to the Charlottesville violence as “a defining moment for this nation in the last few years.” And from the first day of his presidency, President Biden demonstrated that he would use his executive power and powerful public platform in a very different way than Trump.

In fact, the president and leaders of the Department of Justice and the Department of Homeland Security have frequently sought opportunities to speak out against hate and extremism. In June 2021, the White House published its National Strategy for Confronting Domestic Terrorism, which includes an essential commitment to confront long-term contributors to domestic terrorism – highlighting the need to address racism and gun violence, and “invest[ing] in policies and programs that foster civic engagement and inspire a shared commitment to American democracy.” 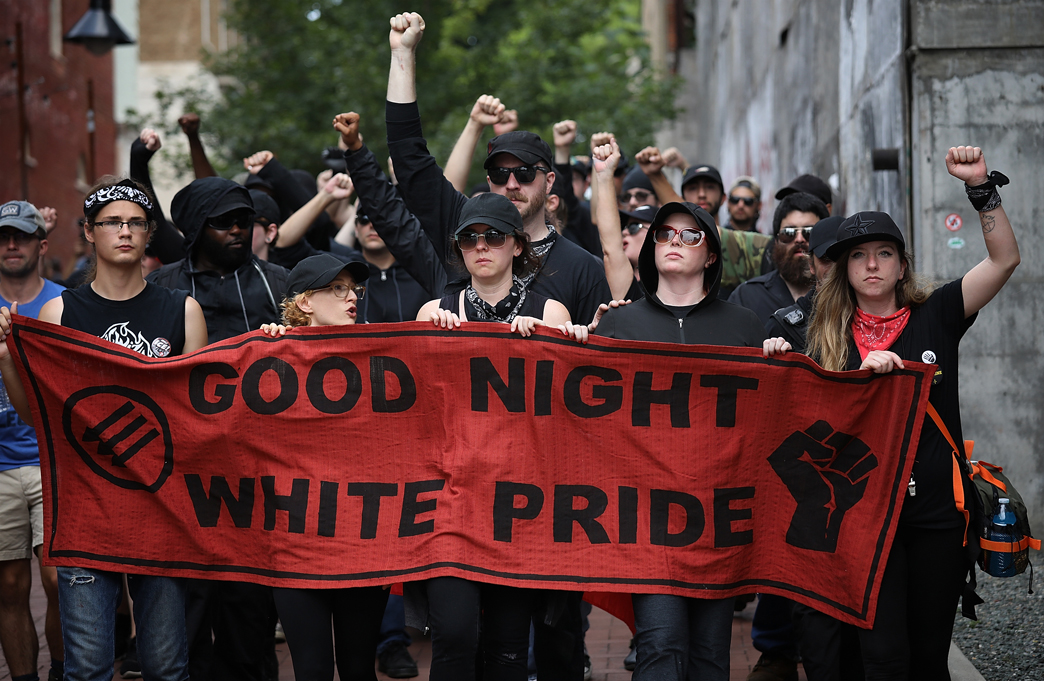 Anti-fascists march near the site of a makeshift memorial where Heather Heyer was killed on Aug. 11, 2018. (Credit: Win McNamee/Getty Images)

In recent years, the director of National Intelligence, the FBI, the Justice Department and the Department of Homeland Security have taken actions to address what they repeatedly identify as the most lethal domestic terrorism threats: (1) racially or ethnically motivated violent extremists who advocate for the “superiority” of the white race and (2) anti-government or anti-authority violent extremists, including militia groups such as the Oath Keepers. Also, a number of congressional committees have held hearings highlighting the threat, on topics like extremism in the military, financing of domestic extremist groups, bomb threats against historically Black colleges and universities and improved hate crime prevention, data collection and response.

In November 2021, nine victims of the Charlottesville violence won a historic court victory against a number of white supremacist groups and leaders. Twelve individual defendants and five organizations were ordered to pay $26 million in damages. This innovative lawsuit, brought under the leadership of Integrity First for America, resulted in necessary accountability and significant financial, legal and operational consequences for the planners and perpetrators of the violence and mayhem.

White supremacists were drawn to Charlottesville in August 2017 over the city’s plans to dismantle statues of Confederate leaders. The deadly riot sparked increased efforts to remove Confederate memorials in other cities, and the police murder of George Floyd in May 2020 ignited significant new community activism. Last month, the statue of a Confederate general in the U.S. Capitol was replaced by a statue of civil rights pioneer Mary McLeod Bethune – the first Black person to have a state-commissioned statue there.

The U.S. military has also made progress in addressing extremism in the ranks and is working toward changing the names of nine Army bases named after Confederates.

The bipartisan House select committee investigating the Jan. 6, 2021, insurrection has presented compelling evidence that the insurrection was the culmination of a months-long strategy coordinated by Trump and his allies to overturn the 2020 election they knew he had lost.

We now know that this strategy includes efforts to undermine the 2024 elections. Trump allies in state legislatures have enacted dozens of racially discriminatory voter suppression laws and continue to wage a disinformation campaign designed to sabotage future elections.

The committee’s hearings and the Justice Department’s ongoing criminal investigations are essential steps toward transparency, accountability and real consequences for the planners and perpetrators of the Capitol insurrection, along with those who inspired and funded their activities.

But over the past two years, there have been significant advances in confronting hate violence.

In May 2021, Congress enacted the COVID-19 Hate Crimes Act, which included the provisions of the Khalid Jabara and Heather Heyer NO HATE Act. The new law – sparked by thousands of incidents of violence, harassment and intimidation directed against members of the AAPI community – authorizes incentive grants to build community resilience and hate crime prevention, training and data collection initiatives, including state hate crime hotlines to help address incomplete reporting nationwide.

Also, the FBI has designated hate crimes as a “national threat priority,” a rare classification. In testimony before the Senate Judiciary Committee last week, FBI Director Christopher Wray said that “[t]he investigation of hate crimes is the number one priority within the FBI’s civil rights program.”

Five years after Charlottesville, we can identify lessons learned and a path forward to face the threat of racially motivated violence and the white nationalist threat to our democracy.

Today, there is much better awareness about the nature and magnitude of this threat. And, as we move forward, we have the great advantage of a much more active and willing federal partner and better tools and tactics to confront the evolving challenges.

We know the political landscape can change abruptly, however, so we must all continue working together to confront the threat of white nationalism and violent extremism. Our democracy absolutely depends on it.

Photo at top: Flowers, candles and chalk-written messages surround a photograph of Heather Heyer on Aug. 16, 2017, in Charlottesville, Virginia. Heyer was killed on that spot and 19 others were injured when a car slammed into a crowd of people protesting against a white supremacist rally. (Credit: Chip Somodevilla/Getty Images)