Members of a federal Naming Commission tasked with changing the names of nine military installations that honor Confederate figures recommended in their final report to Congress this week that the Defense Department rename, modify or remove hundreds of items that honor the Confederacy on military property by January 2024.

Our commemorative landscape in the U.S. reflects and shapes our nation’s values and should reinforce our commitment to democracy, freedom and justice. The branches of the United States military are the most vital spaces to demonstrate these privileges. 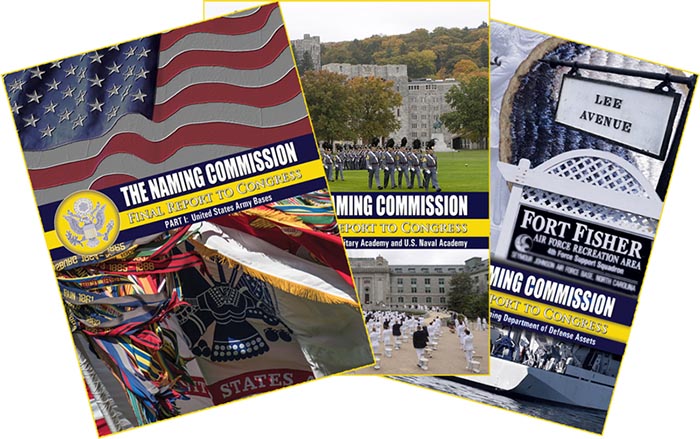 Reports by the federal Naming Commission reveal how white supremacy culture is entrenched in the U.S. military. The commission has recommended new names for nine Army bases named after Confederate leaders. (Courtesy of TheNamingCommission.gov)

In three reports, the Naming Commission has identified more than 800 items honoring the Confederacy on military property. The fact that they are located in 20 states and Washington, D.C. — as well as Germany and Japan — reveal just how deeply rooted white supremacy culture has been within military ranks.

We appreciate the comprehensive work of the Naming Commission. And now it is time to promptly act to rename and remove these assets – starting immediately with the nine Army bases honoring Confederate leaders. The first report of the commission, released in August, included recommendations for new names for these nine bases. There is no reason for further delay.

The 1910s and 1960s saw the biggest spike in the dedication of Confederate memorials associated with the military, substantiating evidence that these memorials went up as part of an organized propaganda campaign in response to Reconstruction and the civil rights movement.

People of color should never have had to serve on Confederate-named military bases – a constant, painful reminder of the white supremacy and racism that has stained our democracy since this country’s inception. Now that the Naming Commission has released its final report, it is time to do the right thing.

Starting with the nine Army bases named in the report, we urge all branches of the military to immediately remove undeserved honors of treasonous men who took up arms against the United States to maintain the treacherous, inhumane enslavement of Black people.

Picture at top: U.S. Army soldiers march in formation during exercises in 2020. On U.S. military property throughout the nation as well as in Germany and Japan, there are more than 800 items that honor the Confederacy. (Credit: Bob Daemmrich/Alamy)