Power Coalition for Equity and Justice, a 2022 Vote Your Voice grantee, represents Louisianans like Deborah, who has a partial disability and walks with a cane. Deborah is one of the countless Black residents who, for over a century of Black voter suppression, have been forced to wage herculean efforts just to cast their ballots.

Deborah was living in Red Cross evacuee housing in New Orleans, three hours’ drive from her home in Calcasieu Parish, after two mighty hurricanes struck in late summer 2020. When early voting began in October and she was instructed by her home parish board of elections official to vote in New Orleans, she tried one, and then a second polling location where the line was shorter. She never anticipated what happened next.

“There was some confusion as to what we needed to do and whether we could vote,” Deborah recounted in a 2021 Southern Poverty Law Center report to the House Judiciary Committee, Fight for Representation. (The report did not disclose the last names of the 76 Louisianans who spoke with the SPLC.)

She wanted so badly to tell her story for the SPLC report to Congress that she gave her account from a hospital following a heart procedure.

The report describes how Deborah was told that she could not cast a ballot in New Orleans. Instead, she would have to return to her home polling location. Outraged and frustrated, she tried contacting television stations to complain, as well as her congressman’s office and the Red Cross. She futilely hoped the Red Cross would provide transportation for fellow evacuees who wanted to vote back home but had no means to travel. In the end, Deborah made the six-hour roundtrip drive herself.

“The disenfranchisement of all the evacuees, facing so many other hardships, and my own experience in exercising my right to vote, should not have been ignored by the people in power,” Deborah said. “They had the responsibility to help us exercise this right but did not take it.”

Power Coalition is among 39 voter outreach organizations across the Deep South that are receiving more than $4.6 million in funding as part of the new round of Vote Your Voice grants announced in August. The initiative is a partnership between the SPLC and the Community Foundation for Greater Atlanta to increase voter registration, participation and civic engagement among communities of color in the Deep South.

The SPLC has pledged to award $100 million in Vote Your Voice grants through 2032.

This year, Power Coalition has been awarded an additional $120,000 over last year’s $400,000 grant. That grant went toward a significant get-out-the-vote campaign, which included a strong field and education effort to mobilize voters.

In addition to those activities, Power Coalition relied on other general operational funds to campaign for an emergency election plan that was signed into law and will provide alternatives to traditional polling sites like schools and libraries that may be damaged or destroyed during a climate crisis. It campaigned for a polling place change notification bill that, too, became law. That law and another bill supported by Power Coalition, which directly addresses obstacles facing voters with disabilities at polling places and is scheduled for debate in the next session, are valuable steps forward for all Louisiana voters.

“We work for and with the people,” said Ashley Shelton, Power Coalition founder, president and CEO, “and there has been magic listening to people. That listening drives our policy agenda for criminal justice reform, voting rights and economic justice.”

Shelton founded Power Coalition in 2015 after working in Louisiana disaster recovery. At the time, she felt frustrated not being able to help Black and Brown communities build political power.

Power Coalition provides the structure for a dozen smaller state nonprofits, including VOTE (Voice of the Experienced), New Orleans Workers’ Center for Racial Justice, and Step Up Louisiana, to develop policy and wage major advocacy campaigns at the state and national level. It also litigates against unjust state and local laws. 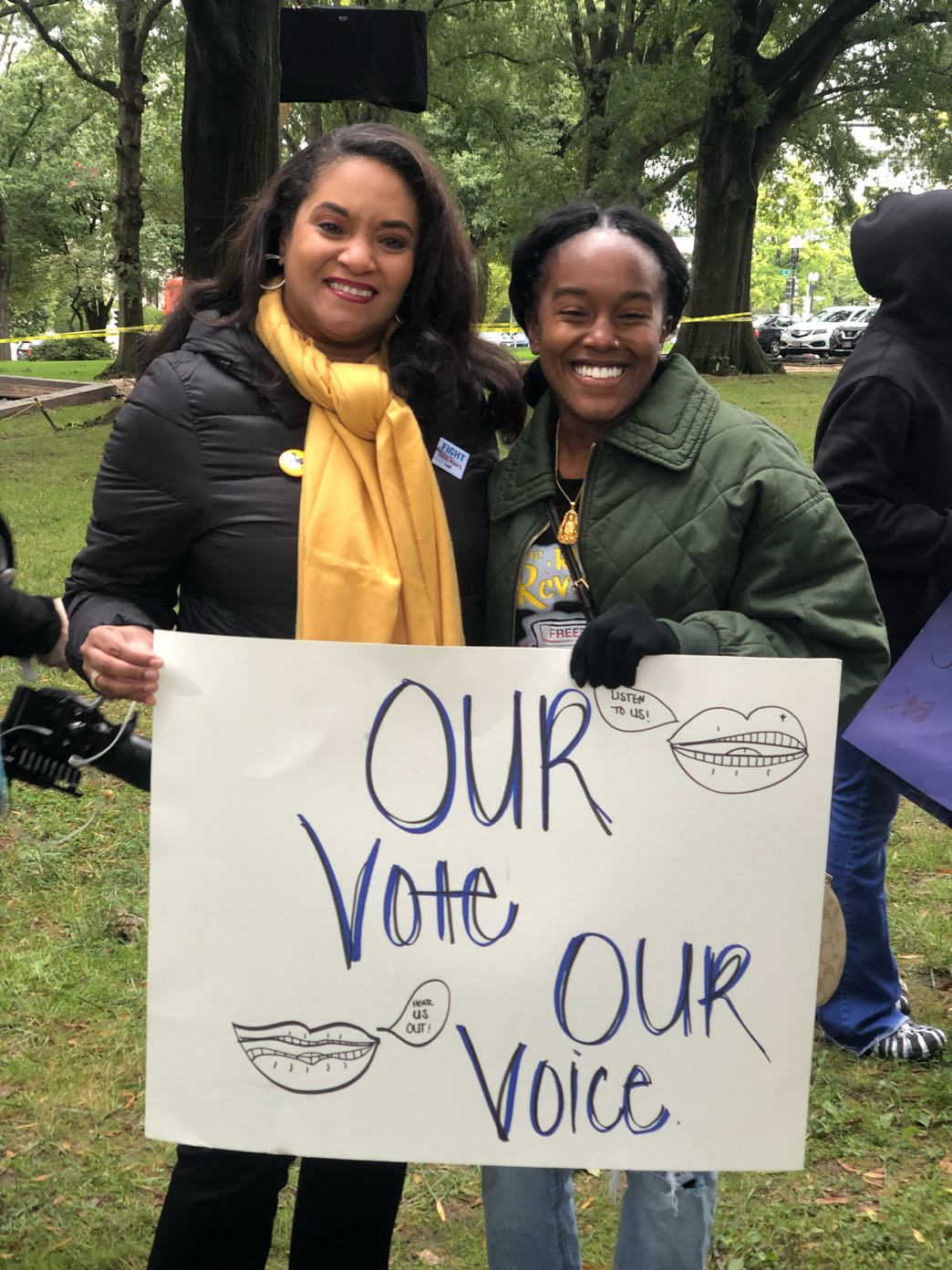 Devasting storms and the COVID-19 pandemic have left many Black and Brown Louisianans in worse economic conditions than before, Shelton said. When basic needs are not met, “it’s impossible to fully engage in democracy and stand in their power. … We see that communities are in a great deal of pain. When people feel they have no hope that anything will get better, it opens the door for suicide, drives crime and a level of desperation. Voting is a social determinant of health. We have to keep the pressure on [so that politicians] make the right decisions.”

Activist groups like Shelton’s kept up the pressure last session, but Louisiana’s conservative, white-majority Legislature chose not to listen.

During the 10-year period between the 2010 and 2020 U.S. censuses, Louisiana’s non-Latinx white population fell from 60.4% to 58%. During the same period, the percentage of Black residents grew by 3.8%. Black people now represent approximately one-third of the state’s total population of just under 4.7 million.

The gaping racial disparity in the map effectively means that Black voters can only elect their candidates in a single district. Yet overrepresented white voters control the results in five of six districts. This explains why no Black candidate has won election to any Louisiana congressional seat since Reconstruction, according to the Legal Defense Fund (LDF).

“We lost white population according to the census and gained over 3% Black and Brown population. How is it that we have less representation than before?” Shelton asked.

Two weeks after the map’s passage, the LDF, American Civil Liberties Union and various other public interest legal groups filed a lawsuit on behalf of Power Coalition, the Louisiana State Conference of the NAACP and nine individual plaintiffs against Secretary of State Kyle Ardoin.

The lawsuit, Robinson v. Ardoin, called for the map to be redrawn with two majority Black districts. In April, a federal district court judge ordered the Legislature to pass a new map, but in a special session called by Gov. John Bel Edwards to redraw the map, legislators refused, asserting that they were in compliance with the law.

In early June, an appellate court ruled the map discriminatory and likely a violation of Section 2 of the 1965 Voting Rights Act, but later that month Ardoin petitioned the U.S. Supreme Court to stay the decision. The court put the case on hold until after a similar Alabama lawsuit currently before the Supreme Court, Merrill v. Milligan, is decided.

Evan Milligan, a named plaintiff in the original Alabama lawsuit, leads another Vote Your Voice grantee that provides funding for grassroots organizations fighting voter suppression. The SPLC is among several groups that filed amicus briefs in support of plaintiffs in the Merrill v. Milligan case. Oral arguments before the Supreme Court were heard on Oct. 4. That morning, Power Coalition partnered with Dillard University to send two busloads of student activists, supporters and volunteers to a prayer breakfast and rally at the Louisiana state Capitol.

A decision in Merrill v. Milligan is expected in Spring 2023.

“The [Louisiana] map is racist,” Shelton said. “We [Louisiana voters] are definitely going with the old map [on Nov. 8]. We are going to hold the line and stand together, let them [the justices] know that we aren’t going to stand by and let them roll back 60 years of democracy, civil rights and progress. … If [the U.S. Supreme Court] makes a decision on Merrill v. Milligan, then we will use the spring months to fight. If we let them gut [Section 2 of the Voting Rights Act], then we will have no case.”

In the meantime, the old map will stay in effect, silencing the voices of non-white Louisianans in November’s midterm congressional election.

“We brought over 250 people to the redistricting session – old folks, young folks. One young woman said she had no hope for this state,” Shelton said. “The reality is that our young people leave. … What young kid will stay here in these conditions, hoping that these folks will do the right thing?”

During the next legislative session, Power Coalition will use part of the grant to continue fighting for fair and equitable redistricting maps and for voting campaigns to expand early and Sunday voting, when Black parishioners often leave church and go to the polls. It will advocate for passage of the John R. Lewis Voting Rights Advancement Act, begin fighting for fair Senate maps for the election of 2023, and continue voter mobilization efforts, expanding its reach to historically Black colleges and universities, reaching young people through multiple strategies, including at high school and college football games.

And Power Coalition is armed with a new superpower: a voter mapping program that tells Shelton how many voting-age residents of color are not registered to vote in each parish.

“What happens when you give 33% of the people power and then add other communities, and you get around 42%?

“There is nothing but opportunity!”

Photo at top: Louisiana's Power Coalition for Equity and Justice is among 2022's Vote Your Voice grantees. The organization will use the grant to continue its mobilization efforts and to fight for fair redistricting maps. (Credit: Power Coalition)