The racism toward Latinx migrants may have reached a new low, as some governors are now busing and flying migrants to other states as political stunts to blame Democrats for migrants’ presence in the country.

Since April, thousands of asylum seekers – mainly from Venezuela, where an ongoing humanitarian crisis was triggered by an economic collapse in 2014 – have been transported to northern cities by Republican governors in Texas and Arizona.

In Florida, Gov. Ron DeSantis recently followed suit. Under a $12 million program created by lawmakers, DeSantis used part of the interest from federal COVID-19 relief funds to transport asylum seekers out of the state by flying them first into Florida from Texas and then to Martha’s Vineyard, Massachusetts.

In response, the Southern Poverty Law Center, along with Leontire & Associates, P.C. and the Criminal Justice Institute (CJI) of Harvard Law School filed a federal lawsuit this week against DeSantis and Jared W. Perdue, secretary of the Florida Department of Transportation, on behalf of nonprofit immigrant rights organizations. The suit challenges the constitutionality of Section 185 of Florida’s 2022 General Appropriations Act (HB 5001), which calls for the “transport of unauthorized aliens from this state.” 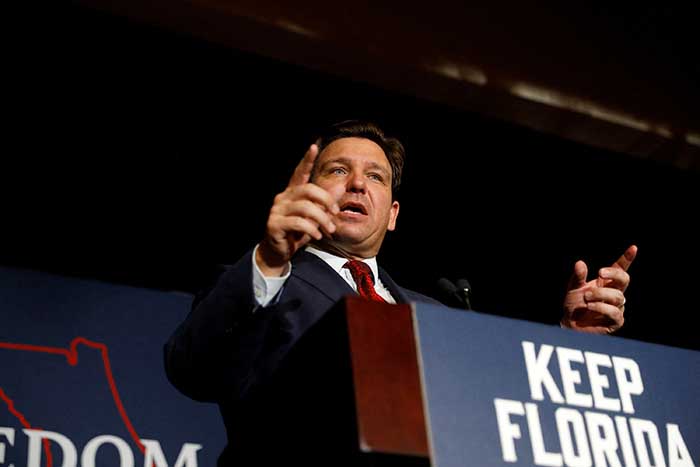 Florida Gov. Ron DeSantis speaks in Tampa during a stop on the Keep Florida Free tour on Aug. 24, 2022. In September 2022, using $12 million in interest from federal COVID-19 relief funds, DeSantis transported migrants to Florida before flying them to Martha’s Vineyard. (Credit: Octavio Jones/Reuters)

“The scheme by Gov. DeSantis and the state of Florida to use taxpayer funds for the ‘relocation’ of ‘unauthorized aliens’ is a blatant and unlawful attempt to harass immigrants at the state level,” said Paul R. Chavez, senior supervising attorney with the SPLC’s Immigrant Justice Project. “Florida’s relocation program constitutes a discriminatory attack on immigrant communities, and Gov. DeSantis’ unconstitutional actions must be stopped.”

The U.S. Constitution grants the exclusive power to regulate immigration policy to the federal government, not the states, Chavez said.

Massachusetts State Rep. Dylan Fernandes, whose district includes Martha’s Vineyard, said DeSantis has been “hatching a secret plot to send immigrant families like cattle on an airplane. Ship … women and children to a place they weren’t told where they were going and never alerted local officials and people on the ground here that they were coming. It is an incredibly inhumane and depraved thing to do.”

As it turns out, before DeSantis could say he kicked migrants out of Florida, he had to pay to fly them in, the Miami Herald recently reported.

The Herald reported that documents released by the politically connected aviation company that helped manage Florida’s migrant relocation program show that DeSantis “wriggled around a requirement that Florida use the money to export Florida migrants – not those living in some other state.”

“This stunt was paid for pursuant to Section 185 of the 2022 General Appropriations Act; that program, which we argue is unconstitutional on its face, was created solely to transport migrants out of Florida, not between other states,” Chavez said.

“It’s pretty disgusting to see that politicians are capitalizing on the difficult circumstances these families are in for a ‘gotcha’ moment and political stunt,” Julian Cyr, the state senator who represents Martha’s Vineyard, told Politico writer Lisa Kashinsky.

DeSantis has a history of using immigration as a scare tactic in Florida. Unfortunately for migrants, their plights may have now become more difficult.

“Migrants in Florida have fled economic hardship and political repression from Cuba, Venezuela, Haiti and many other countries,” Chavez said. “This move will harm families whose loved ones have managed to reunite with them in Florida.”

Picture at top: Venezuelan migrants stand outside St. Andrew’s Episcopal Church in Edgartown, on the Massachusetts island of Martha’s Vineyard, on Sept. 14, 2022. Florida Gov. Ron DeSantis transported asylum seekers out of his state in a political stunt designed to blame Democrats for the presence of migrants in the U.S. (Credit: Ray Ewing/Vineyard Gazette via Reuters)