WASHINGTON — The murder of Ahmaud Arbery, a Black man out for a jog in Georgia, thrust controversial Stand Your Ground laws back into the headlines. To better inform the debate around these dangerous laws, Giffords Law Center and the SPLC Action Fund are releasing a new report, "Stand Your Ground" Kills: How These NRA-Backed Laws Promote Racist Violence, analyzing the failure of Stand Your Ground policies.

“Stand Your Ground laws are racist policies that give trigger-happy aggressors a license to kill,” said Robyn Thomas, Executive Director of Giffords Law Center. “Time and time again, we’ve seen Stand Your Ground disproportionately harm Black and Brown communities, including the horrific shooting of Ahmaud Arbery in Atlanta. Far too often we see vigilantes shoot first and ask questions later. These laws are deadly and completely unnecessary, and all 27 states that have enacted them should act now to repeal them.” 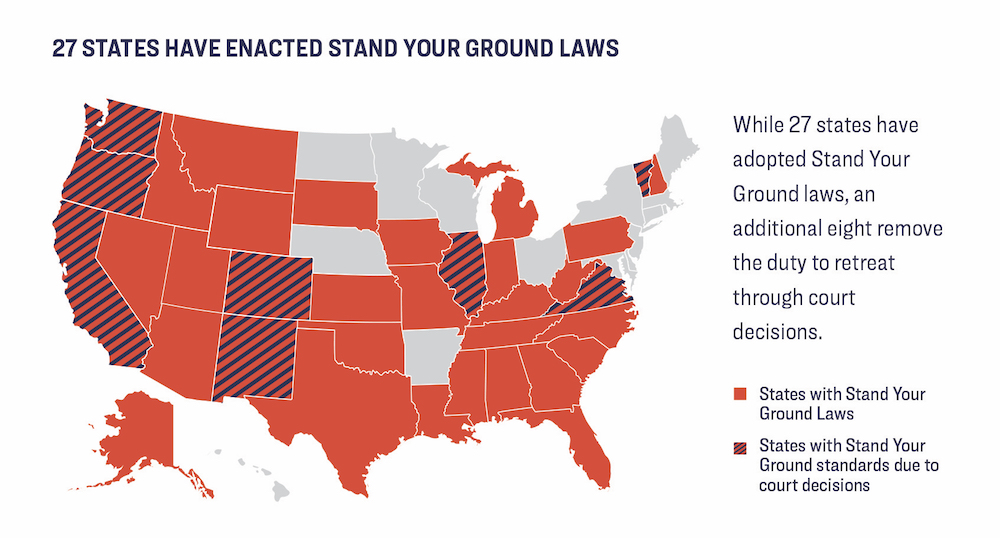 “Stand Your Ground laws have fueled vigilante violence against communities of color across the country for years,” said SPLC Action Fund President and Chief Executive Officer Margaret Huang. “They have allowed murderers to walk away and face absolutely no consequences for their actions. They have robbed families of their loved ones, needlessly divided communities along racial lines, emboldened racists, and exacerbated the racial and gender bias in our justice system. They need to be overturned.”

Over the past two decades, right-wing organizations like the National Rifle Association and the American Legislative Exchange Council have sought to alter self-defense laws to further tilt the scales of justice in favor of killing. This has meant providing the largely white male base of these organizations greater authority to use lethal force in more places and with more impunity.

Some states have particularly egregious laws justifying use of deadly force. For example:

Stand Your Ground laws do not lead to the decreases in crime that proponents long touted. They do, however, lead to an increase in homicides. Using Florida as a test case, researchers found:

Given the striking failures of Stand Your Ground laws and the harms they inflict on Black and Brown communities, Giffords Law Center and SPLC Action Fund stand with partners and allies like Amnesty International, Cities United, the Community Justice Action Fund, The Dream Defenders, the NAACP, and others in calling for states to dismantle Stand Your Ground nationwide.